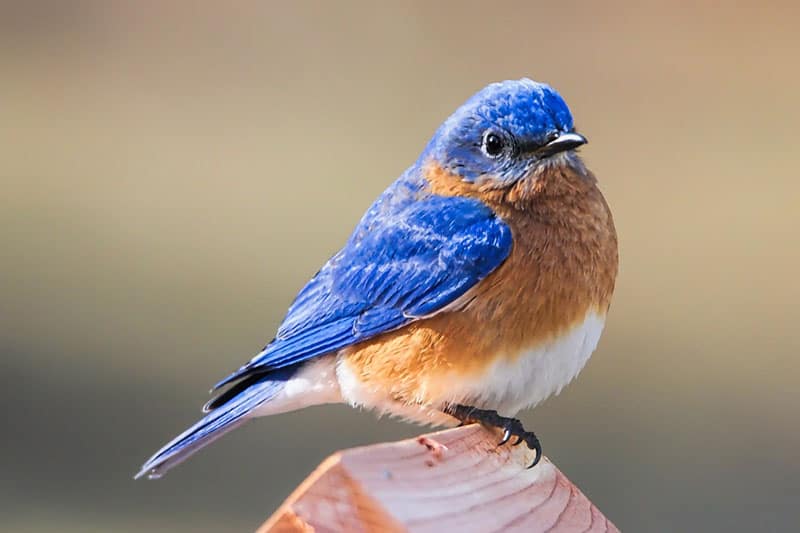 In this article we’re looking at birds that all have one thing in common, orange bellies! Below you’ll find a list of 15 birds with orange bellies, or in some cases reddish-orange.

Although many are Passeriformes (song birds), there are several others on this list from other orders, making for a well-rounded list! Next time you see the flash of an orange belly, you’ll be that much more likely to identify it.

Ok, let’s get right to the list of orange-bellied birds!

These pretty blackbirds have beautiful, obvious coloring. Males have glossy black heads with flamey orange hues on the belly and lower back. Females have varying degrees of orange on the belly as well, but can appear to be more yellow—not uncommon with younger birds.

Baltimore Orioles are found throughout the eastern half of the United States and some of Canada in the spring and summer for breeding before returning to Central and South America for the winter. These beauties can be tempted to your feeders by putting out oranges and jelly!

Similar in looks to a Baltimore, male Bullock’s also have a fiery orange belly and breast. Their backs are all black and unlike the Baltimores, their heads are only black on the crown and nape. A black line strikes through the eye. Females are always yellow.

Bullock’s Orioles are found in the western half of the U.S. during the breeding season. The ranges of these orioles and the Baltimore’s overlap in the Great Plains. Here, they often hybridize.

Because of this and their physical similarities, they were once considered the same species and known as the Northern Oriole. Genetic research has told us that they actually aren’t closely related. 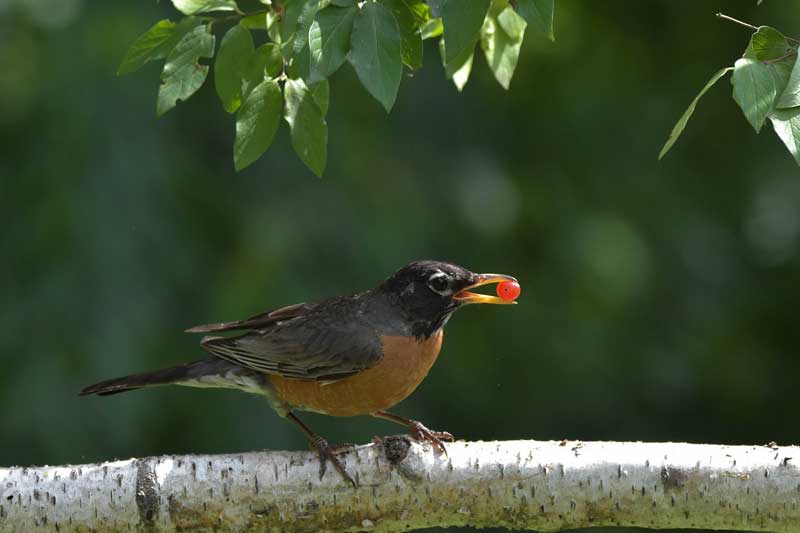 These plump thrushes everyone knows and loves are iconic. They are often used as a reference point for size when identifying other species and are the telltale sign of spring.

American Robins are slaty brown on top with warm, dark orange or red breasts and bellies. They have dark heads with white feathering around the eyes. A white patch can be seen underneath the tail.

American Robins are present in the majority of North America—even in some of the coldest places of Alaska and Canada. Regional differences in plumage can be noted, with western populations being paler overall than eastern populations. Populations along the Canadian Atlantic are boldly colored with black on the neck and upper back.

These pretty birds have blue heads and backs and wear a vest of rusted orange. The females aren’t as intensely colored and only have a wash of orange on their chests.

These guys readily nest in birdhouses of the right dimensions and will stop by your feeders if there’s mealworms (they’re mostly insectivores.)

Western Bluebirds are found throughout western U.S. with variable populations of year-round, breeding, migrating, and wintering residents sprinkled throughout.

These plump birds have striking coloring—blue above and rusty orange on the top half of the breast and white on the bottom half. As with the female Western Bluebirds, females of this species are not as vibrant, with more of a grey overall color and an orange wash on the chest.

These guys can be found year-round in the eastern half of the U.S. They breed in some of the most northern states and into Canada and winter on the outskirts of Texas, New Mexico, and Colorado.

Barn swallows are darty, acrobatic birds that are dark blue-black on the upperparts and face, and a rich cinnamon color on the chin, neck, and belly. The contrast of the blue and rufous against each other makes for a beautiful bird.

These birds breed in much of North America, including the majority of the United States and a good portion of Canada. They return to central and South America for winter.

A legend says the Barn Swallow got its forked tail because it stole fire from the gods to bring to people. A piece of burning wood was thrown at the swallow by an angry deity that singed away its middle tail feathers.

This phoebe is dull grey overall with a wash of dull orange cinnamon on the lower belly. Although not as vibrant as other orange plumages on this list, the orange wash is still noticeable against the grey hues.

These little flycatchers breed in western U.S., a bit of Canada, and Alaska. Their year-round territories are southeastern states and into Mexico.

Say’s Phoebes have been in the U.S. for a long while. Fossils of this species have been discovered by paleontologists in Arizona, California, New Mexico, and Texas dating back to about 400,000 years ago (the late Pleistocene.)

Male Rufous Hummingbirds are like little, flying flames. They are orange overall, with a small patch of white just below the throat.

Found in western North America, Rufous hummers will travel nearly 4,000 miles from breeding grounds in Alaska and northwest Canada to wintering sites in Mexico! That’s a far distance for such a little guy.

A sunburst of color, males are orange overall and not that much different than Rufous hummers in looks.

Although similar in looks, they are not similar in prevalence—Allen’s are not nearly as widespread. Allen’s hang out on the west coast with a few migrants dipping down into Mexico for the winter.

Unlike most migrants that return in spring, these guys come back much quicker (as early as January!) I guess the California sunshine is just too irresistible!

You may also like: Interesting hummingbird facts, myths, and FAQ

These chunky birds look sort of goofy when at rest. Their large heads and absence of any semblance of a neck give them a bulging shape.

They have excellent camouflage on their back of black and brown mottled coloring and grey stripes. Their breasts and bellies range from a light tawny color to orange. They blend in so well that they often aren’t seen unless a male performs his magnificent aerial corkscrew dance and song.

American Woodcocks probe the ground for food. Because they are often face down in the dirt, they are able to keep their eyes out for predators by the eyes’ positioning on the head. They are high on the skull and closer to the back of the head. This allows them to see around them and in the sky while they’re getting a snack!

These birds are found throughout eastern North America. 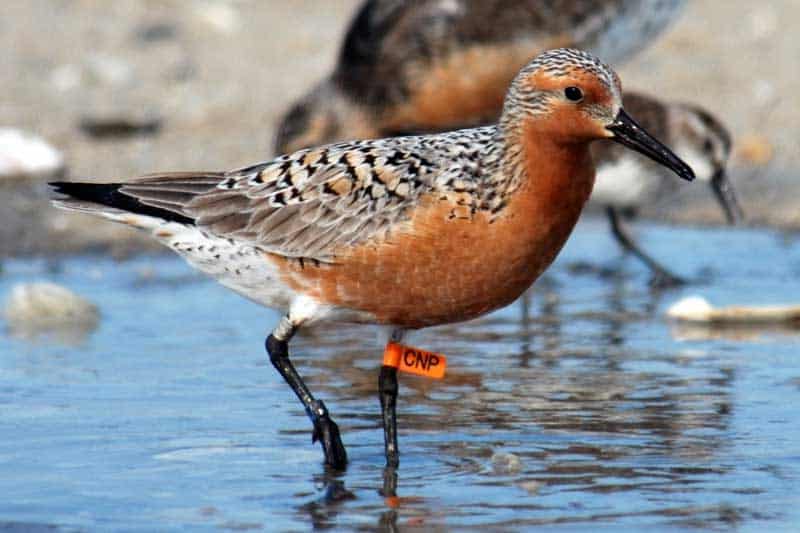 These sandpipers have a mottled back of gold, black, and rufous feathers and a rich orange face, neck, and belly.

In North America, these birds stick to the coasts and don’t venture too far into the mainland. They spend the wintering months on U.S. and Mexican coasts, migrate along Canadian coastlines and Alaska, and breed in the High Arctic on dry tundra slopes.

Because they are coastal birds, their diet consists of many ocean invertebrates, including marine bivalves, shrimp, horseshoe crab eggs, marine worms, and chitons.

These beautiful thrushes have steel blue backs and heads with deep orange bellies, throats, and eyebrow stripes. The steel blue of the back wraps around creating a thick collar on the breast. Their wings are flecked with orange wing bars.

They winter along the western states of the U.S., up into western Canada where they breed, and further into Alaska where they also breed.

These little acrobats have a white and black striped head, blue grey backs, and cinnamon colored bellies. The vibrancy of the females bellies are often more dull and washed out, as is with most female birds.

They dance along coniferous tree trunks, hunting for insects. You can find them in spruce, fir, hemlock, pine, and others. In northeastern North America they also are found in deciduous trees.

To protect their nests, Red-breasted Nuthatches collect resin globules from coniferous trees and paste them around the entrance of its nest hole. The male puts the resin around the outside of the hole while the female puts it around the inside.

This resin may help keep predators away. To avoid getting sticky themselves, they expertly fly directly into and out of their holes, avoiding the sappy residue.

These birds can be found in most of the United States and Canada.

Male Black-headed Grosbeaks have black heads (as the name suggests), streaked orange and black backs, and a tangerine colored belly. Females are more dull and plain.

This species breeds in the eastern half of the United States and winters in Mexico. In central Mexico, where monarch butterflies and Black-headed Grosbeaks both spend the winter, the grosbeaks will eat them, even though they’re poisonous.

The toxins in the monarch make them unpalatable to most birds, but Black-headed Grosbeaks can eat them. They feed on monarchs in roughly 8-day cycles, possibly to give themselves time to eliminate the toxins. 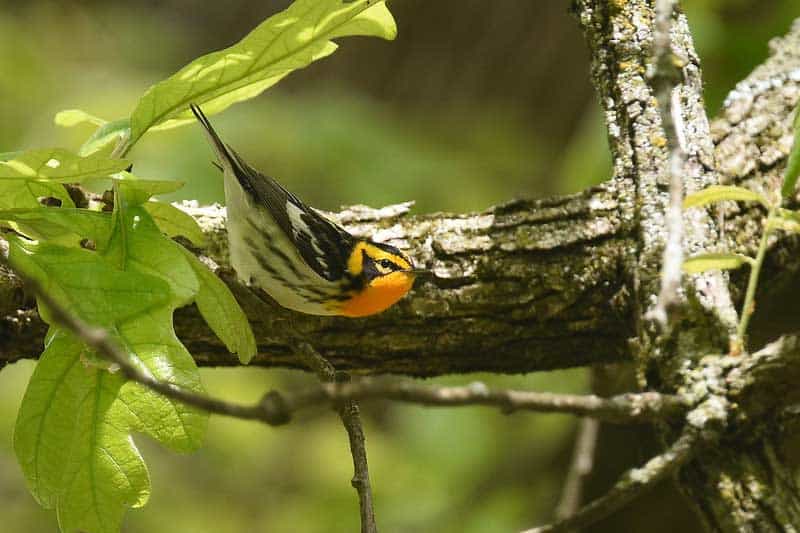 Breeding males are black and white on top, but have striking orange plumage on the face and throat, with a wash on the belly.

These pretty warblers breed in the northern states of eastern U.S. and into Canada and use the rest of the eastern U.S. as migration states for their travels. These little guys do a lot of flying each year and often find themselves off course when traveling between North and South America.

Vagrants have been found in Iceland, Greenland, Scotland, and the Azores off western Africa. I guess it’s easy to accidentally fly over an entire ocean!

You may also like: 36 species of warblers in Tennessee and Kentucky