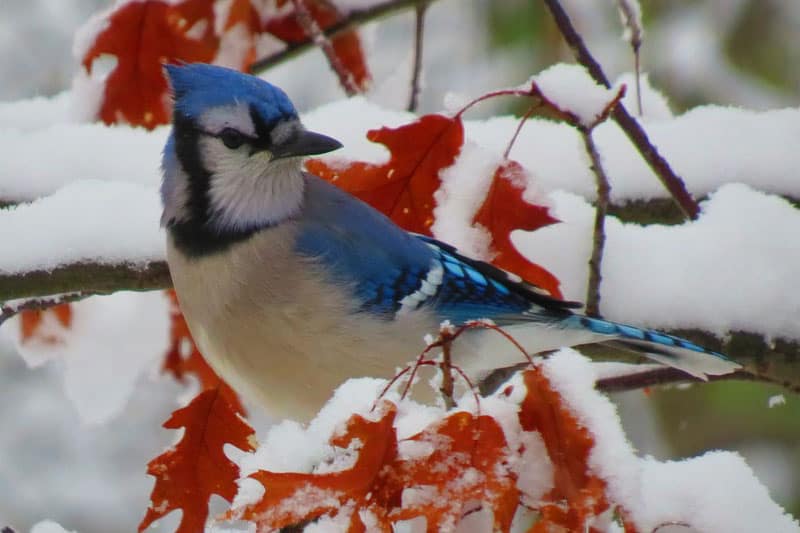 Blue jays are colorful, fairly large and noisy birds. It’s no surprise that there is plenty of symbolism surrounding them since they seem to always demand your attention.

Blue jays have always had an interesting mix of interpretations as symbols that are both positive and negative. Courage, loyalty, aggression and warnings of danger are all common symbols associated with the blue jay. In this article we look at tattoos, totems, dreams, and everything related to understanding the various interpretations of blue jay symbolism.

What does a Blue Jay symbolize?

We can deduce what a blue jay symbolizes based how blue jays conduct themselves. If you have ever watched one you may have noticed that they are quite bold and aggressive. They don’t seem to fear anything, even larger birds or animals, and other birds will often make way for them at a feeder. Blue jays are also known for being quite vocal. Not only do they have several loud calls but they can also mimic other birds and sounds.

Here is some of the most common symbolism associated with blue jays:

It is rare for two blue jays to find a new partner once they have mated, they tend to remain monogamous.  They are also known to look out for other members of their flock, and raise the alarm to other blue jays if a member of the group is in trouble. As a result, blue jays are often looked at as representing loyalty and community.

Seeing a blue jay may mean it’s time for you to strengthen your relationships with friends and family. If you feel distant from someone you care about, or disconnected from the community, a blue jay sighting can be a reminder to put effort into being more involved.

The blue jay can also encourage you to look out for your own flock, and protect those close to you.

Blue jays are often considered to symbolize elevation of spirit. By connecting with your own spirituality and keeping spirituality in the forefront of your mind, you will be better equipped to tackle life’s complexities. The color blue itself is often seen as being symbolic of truth, higher wisdom and spiritual power.

Blue jays are known for fiercely defending their territory and nests. If a predator enters their space, they don’t quietly shrink away. They raise a ruckus and will even fly right at the intruder.

If there is a situation in your life that is making you feel threatened, the blue jay can serve as a reminder to not back down. Trust your inner strength and speak up to defend yourself or those you care about. In hectic or difficult moments, viewing a blue jay might be a sign that you will need to step up your assertiveness and tenacity.

The bold personality of the blue jay can inspire you to be bolder too. If you are shy, feel like a push-over or are wishy washy in your decisions, take a page from the blue jay’s playbook. The blue jay spirit wants you to assert yourself, find your inner courage to stand up for yourself, have confidence in making decisions. Take up some space in the world rather than shrinking away from it.

Just like the loud and bold blue jay, speak your truth. The blue jay teaches you to believe in your own strength and use it to express yourself.

Blue Jays’ survival depends on their ability to outwit and outlast their predators. They are members of the Corvid family of birds, which includes crows and ravens.

Blue jays are known for mimicking other birds, especially the calls of a hawk. This can be used to their advantage to scare off other birds from a food source so the blue jay can have it all to themselves. They have also been observed using tools to gain access to food, something very few animals attempt.

Bluejays can therefore remind us to have an agile and open mind. Use wit and clever thinking to give yourself the advantage in any situation.

What do Blue Jay Dreams Symbolize? 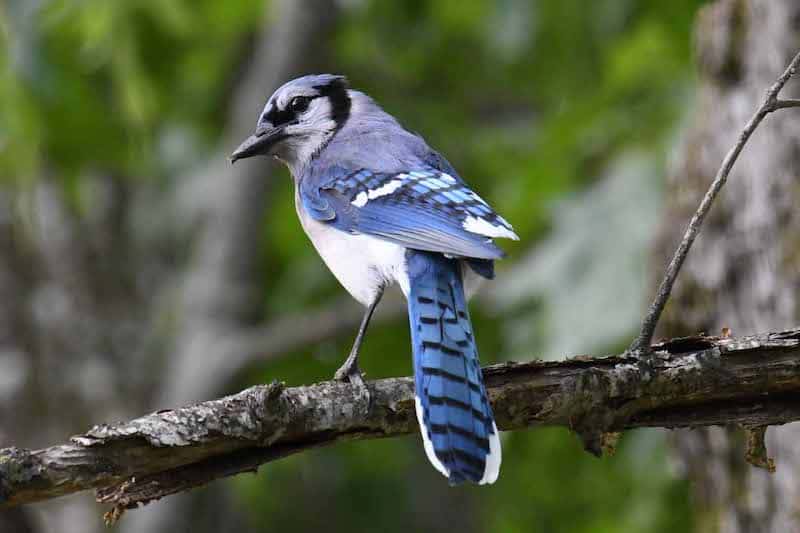 Symbolism in Visits or Encounters With Blue Jays

It’s possible that seeing a blue jay is a message that you need to improve your perseverance, courage, and desire to fight for what you believe in. Keep in mind that the blue jay embodies all of these characteristics, which is why it can survive and prosper in the wild.

Superstitions about Blue Jays are a dime a dozen and some date back many centuries. They often contain more negative connotations, but blue jay superstitions have historically been both positive and negative.

For Christians, Blue Jays depict persistence, great communication, and a bright outlook. Is this found in the Bible? No! However, the bird symbolizes hope and is a reminder that Christians can face persecution too, but like the birds, can overcome the situations they face.

Many Christians feel convinced that if a Blue Jay appears in their yard, positive things await them going forward.

In African American folklore from the United States south, the blue jay was held in spiritual regard and was said to have been the creature who brought the first “grit” or “dirt” to create the earth when the world was covered in water.

Although the blue jay had a dark side in much of their folklore as well. The blue jay was said to bring twigs to hell to fuel the “infernal fires” every Friday as some sort of punishment or deal with the devil. It was often seen as a trickster with bad intentions, or causing trouble even with good intentions.

As a spirit guide, blue jays will remain a faithful teacher and stay with you until you’ve completed your quest. The blue jay spirit guide protects you from negative energies and shows you how to be adaptable and resourceful.

As a person with the Blue Jay as their spirit animal, you might choose to portray yourself through speech instead of physical interaction. The blue jays spirit helps you to speak with confidence and encourages well thought-out conversations that are clear in meaning.

Blue Jay as a Totem

If you are born with the blue jay totem it is said you will always be curious, like to try many new things and have new experiences.

Those born under the blue jay totem are protective of their family and a fierce defender of those they love.

Bluejays were often looked at negatively by Native Americans due to their noisy and aggressive behavior. In some tribes their role in stories was as a gossip, bully or even thief. However in other tribes such as the Chinook and Chehalis, the bluejay was a trickster, but not an evil one. It was seen as benevolent and helpful to people, but also careless and foolish.

Blue Jays were viewed as gossiping, haughty, pompous, and greedy birds because of their loud chirping. Some tribal leaders felt that seeing a Blue Jay near home signaled individuals were scheming against them in a hateful manner because blue jays were seen as liars and cheats.

However, it’s not all doom and gloom with blue jays. One of the most common beliefs in Native American religion is that Blue Jays appear before sunrise or once the sun sets. That signifies substantial shifts and encourages people to prepare for what’s next.

It’s interesting to note that Native Americans utilize blue jays as a positive sign. The Eastern Woodlands clans regard blue jays as a symbol of success and good fortune.

Since they are inquisitive birds who venture out in all sorts of weather, they are often utilized as a symbol for the “Great Mystery.”

After death, people across the Western and Northwestern Regions rely on Blue Jays to assist them to find their path to the next life. They are there to help those who are lost or have no idea where they should go in the first place.

Blue jays have a long history of being bold birds, whether they are looked at as the trickster or the protector. The spirit of the blue jay can remind us to find our inner confidence and present ourselves to the world with honesty, strength and clarity. They can also remind us to look out not only for our best interests, but take care of those around us.

Whether you’re getting a Blue Jay tattoo or trying to decipher a dream about them, it doesn’t hurt to read up and get a clearer understanding. Hopefully, our in-depth research proved helpful.