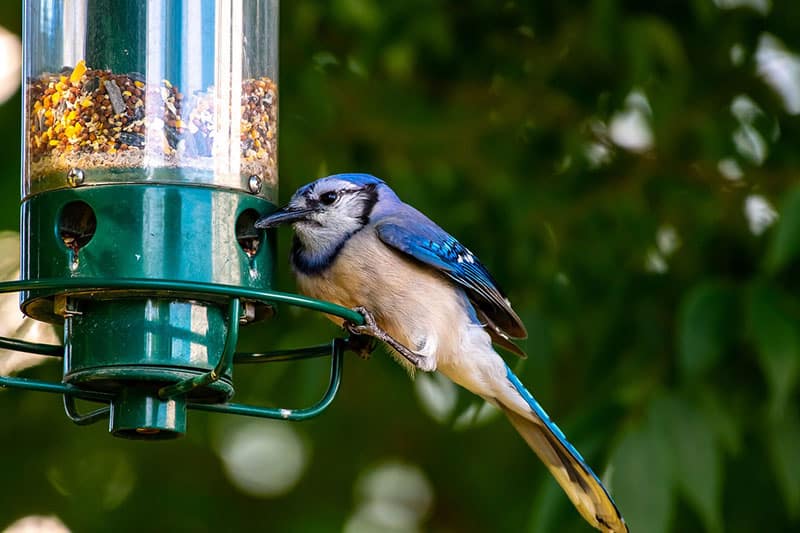 Blue Jays are among some of the most recognized backyard birds in North America. Whether you’re an experienced bird watcher or just interested in these beautiful songbirds that you often see in your backyard, you should find this article interesting and informative. Keep reading for 22 fun facts about Blue Jays!

1. One of Blue Jays’ favorite foods is acorns.

Blue Jays typically live on the edge of forests, and they enjoy acorns tremendously, among other seeds and nuts. They are found near oak trees a lot because of their interest in eating the acorns.

On average, Blue Jays live about five to seven years, but the oldest known Blue Jay lived for at least 26 years and 11 months.

Seven US states claim the Northern Cardinal as their state bird, but the Blue Jay is not recognized as a state bird in any US state. However, they are the mascot of a Major League Baseball Team, the Toronto Blue Jays.

7. Blue Jays act as a natural alarm system for other birds.

Like many small birds, one of the predators of the Blue Jay is the Red-shouldered Hawk. They warn other birds of the hawk’s presence by imitating the sound of the hawk when they see one.

These intelligent birds like to chatter a lot. They can imitate the sounds of predators, and otherwise, their sounds range from lovely chirps in the morning to loud and obnoxious squawks. It used to be a jay referred to a person who was a chatterbox and liked to dominate the conversation, so Blue Jays definitely live up to their name.

In captivity, Blue Jays have been seen to use tools to get food, such as using scraps of newspaper or sticks to bring food closer to them from outside their cages, and they have also been seen manipulating locks. Farmers have also observed them waiting until they are done planting to fly down and enjoy the seeds.

The mating season typically takes place from mid-March to July. Once a female Blue Jay chooses her mate, they are typically together for life in a monogamous relationship.

Both male and female Blue Jays work together to build a nest for their young, and then when the female is sitting on the eggs, the male will feed and take care of her. Once the young are about 17 to 21 days old, the whole family will then leave the nest together.

Some Blue Jays stay all year in one place, and others migrate. Younger Blue Jays are much more apt to migrate than the older ones. Some individual Blue Jays will migrate south one winter but not migrate the next year.

Some birds are nocturnal and active at night, but Blue Jays are active during the day, which means they are diurnal.

15. Blue Jays have many predators.

Blue Jays, like other birds, use their strong bills for cracking seeds, nuts, and acorns for food.

Any shrub or tree can be used for nesting, but the Blue Jays seem to largely prefer evergreen trees. They build their nests about 3 to 10 meters high in the tree, and the nests are cup-shaped, made out of twigs, moss, bark, cloth, paper, and feathers.

18. Blue Jays are in the same family as the crow.

Though they are much prettier looking, Blue Jays are closely related to the crow.

19. Blue Jays are expanding where they live.

They are mostly found in the eastern and central parts of the United States, but they are slowly expanding to the Northwest.

20. Blue Jays participate in a practice known as “anting.”

Blue Jays will take ants and wipe them across their feathers, which almost makes it seem like they are bathing in ants. But scientists believe that they do this to make the ants secrete their harmful spray so that when the Blue Jays eat them, the ants are more easily digestible.

Blue Jays live in small family groups or pairs, but they will gather in large flocks during their mysterious migratory season.

22. For a small bird, Blue Jays have a large wingspan.

The Blue Jay’s wingspan can be anywhere from 13 to 17 inches. 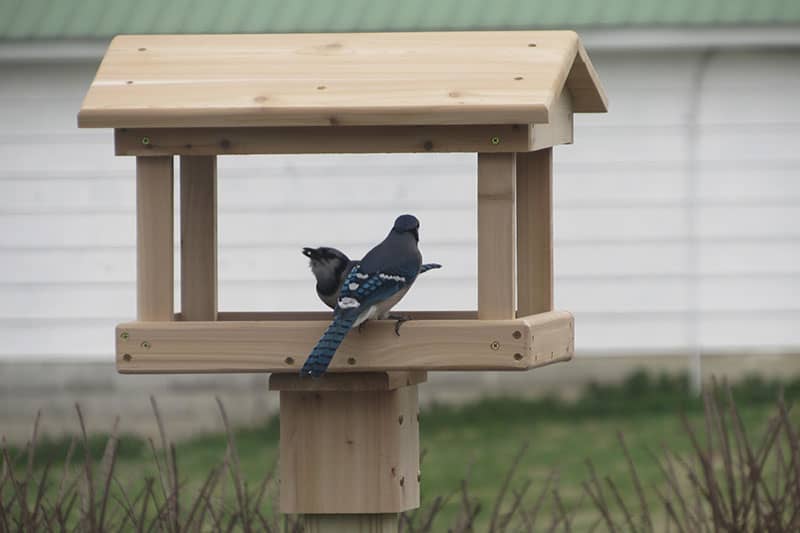 Blue Jays are an incredibly interesting type of bird. From the way they use their voices to how intelligent they are, they are a magnificent bird to have around whether you see them in your back yard or while you’re out on a hike.