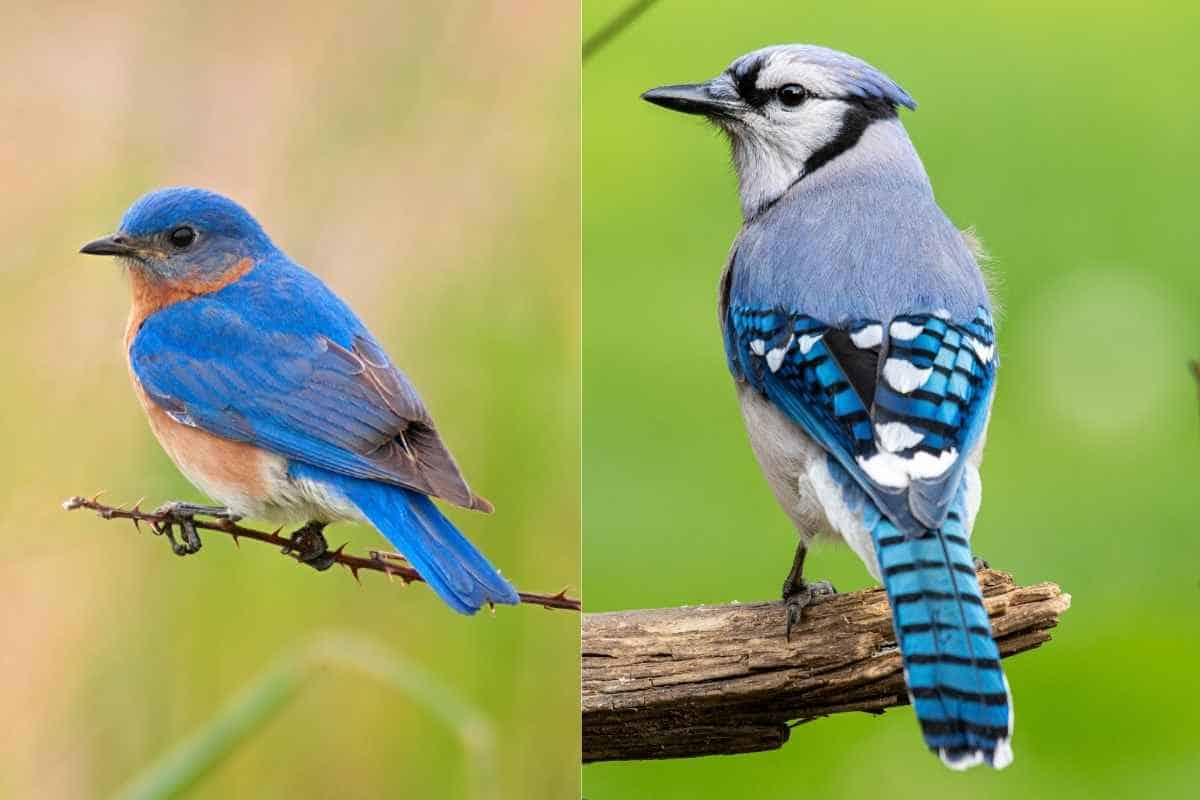 Bluebirds and blue jays are two blue-feathered birds that live in North America. While these songbirds are both blue, they have many differences that make them easy to tell apart.  This article focuses on 9 major differences between bluebirds vs blue jays. At the end of the article, you’ll learn a little more about each species.

9 Differences between Bluebirds vs Blue Jays

From plumage patterns to diet to the sounds they make, these two birds have many differences that make each unique. While this isn’t every single difference between the two, this list of 9 differences between bluebirds vs blue jays should give you a great understanding of the main characteristics for each species.

You may worry that two birds that are both blue will be hard to tell apart. This is not the case for bluebirds and blue jays. One immediate difference you can spot is that blue jays have black stripes on their wings and tail, as well as a black ring around their neck and black stripe through their eye. None of the bluebird species have stripes or black coloring on their head / neck.

This is a fancy way of saying, the males and females of the various bluebird species have differing plumage. Males tend to be a much brighter blue with deeper orange or blue coloring on their chest. Female coloring is much paler. This is not true for Blue Jays, both males and females have the exact same coloring.

Blue Jays are a member of the Corvidae (a.k.a. Corvid) family of birds. This family includes jays, crows, ravens and magpies. Members of the Corvid family of birds are thought to be the most intelligent bird species, able to use tools, problem solve, and identify themselves in a mirror.

Blue Jays are no exception and are known for their cleverness. They are skilled at adapting to environmental changes, such as human development. Blue Jays excel at mimicry and have been known to imitate hawk calls. Some can even be trained to come when called and eat from your hand.

Now we aren’t calling bluebirds stupid by any means. Jays just possess an extra level of intelligence over other songbirds.

4. Blue Jays are bigger than Bluebirds.

Bluebirds have a round head, while Blue Jays head appear more angular with a crest at the top. While both have a black beak, it appears shorter and more delicate on bluebirds, and longer and thicker on Blue Jays.

Blue Jays are often found around oak trees, where they search for acorns on the daily. They often pound the nuts on the ground to break them open so they can eat the meat inside. These birds are a fan of most nuts, and are known for being drawn to feeders with peanuts in the shell. They also eat fruit, insects, grains and sometimes other birds eggs and nestlings.

Bluebirds tend to not eat many seeds and aren’t interested in acorns or larger nuts.

Bluebirds are well-known for their sweet morning song, especially in the spring. Their song is often described as a soft and sweet, melodious warble. Blue Jays, on the other hand, don’t often “sing”. They have a wide variety of different calls that can be quite loud, metallic or whistle sounding. Very different from the sweet warble of the bluebird.

Don’t get between a hungry bluebird and its insect meal! While bluebirds thrive on berries in the winter, they prefer to eat mainly insects during the warmer months. A bluebird will hunt by waiting on a perch in an open area. Once they see a suitable insect, they swoop down to the ground to grab it. Mountain bluebirds also catch insects by “hawking”, and can catch them in mid-air.

Due to their love of insects, the best food to put to attract bluebirds is mealworms.

8. Blue Jays have a throat pouch where they store food.

Blue Jays like to store food to come back to later. They have a “gular pouch” in their throat that they can carry extra food in to their cache site. Using their pouch and their mouth they can carry up to five acorns at once.  They create caches of food in tree cavities, bury them in the ground, or any other spot they deem good for hiding.

9. Blue Jays mimic the calls of the Red-shouldered Hawk.

Scientists aren’t sure why Blue Jays imitate hawk calls, but they believe it may help the jays communicate with one another. It might also scare off potential predators that think a hawk is present, or even scare off other birds temporarily from a bird feeder so the blue jay and swoop in and grab some food.

While size slightly varies, the Eastern species grows the largest so we can use them to show the maximum range for the following stats:

Eastern bluebirds live in open woodlands and forest clearings. They love partially-open habitats where they can hunt for insects and berries among grass and bushes.

Western bluebirds like pine and spruce trees scattered over an open landscape. They like groves of trees and hilly country near streams.

Mountain bluebirds prefer open landscapes without trees. They even nest in cliffs and socialize with Western bluebirds.

Bluebirds eat primarily insects and berries. They like to forage in thickets, where they can hop from branch to branch in search of a snack. Bluebirds are well known for catching insects on the ground by swooping down on them from a perch. They can also catch insects in the air. When insects become less plentiful in the fall, they switch over to a diet heavy in berries.

In the spring, they forage more for insects to feed their chicks. Attract bluebirds to your yard by putting out live or dried mealworms. If it’s not too hot, you can also try suet.

Eastern bluebirds are the most commonly known bluebird in the United States. They’re found year-round in the Southeast, but range upwards to southern Canada during breeding season.

Western bluebirds live on the west coast of the United States south into Mexico.

The Mountain Bluebird’s range stretches across the mountainous areas of Western North America, breeding from Utah to Alaska in the summer, and wintering down through Mexico.

Male Eastern bluebirds have a bright blue head, back, and tail. Their chest is a rusty orange, with a white lower belly. Females have the same coloring but are much paler, appearing more gray-blue.

The Western bluebird looks similar, although their rusty chest coloring extends over the shoulder and onto the upper back.  Their lower belly has blue-tinged white feathers.

The male Mountain Bluebird is a bright powder blue, which stands out in the desert. Females are dusky gray with blue feathers on the tips of their tail and wings.

Blue Jays adapt well to human infrastructure, considering they prefer habitat along the edges of forests and fields. They avoid evergreen forests, since their favorite food, acorns, can only be found in deciduous oak trees.

Blue Jays are omnivores. They eat insects, fruits, berries, and even small animals like mice, frogs, and other small birds. They are notorious for sneaking up on nests and stealing eggs from other birds during breeding season. Even so, most of their diet is actually from plants, especially acorns.

Native to areas east of the Midwest, Blue Jays can be found year-round from Florida all the way to Maine, and east to Kansas.

Blue Jays are easy to spot, thanks to their characteristic large size and blue crest. They have a white underside and blue back, with black striping on the wings and tail. On the ground, they hop from place to place. Their loud and often-grating calls are hard to miss.