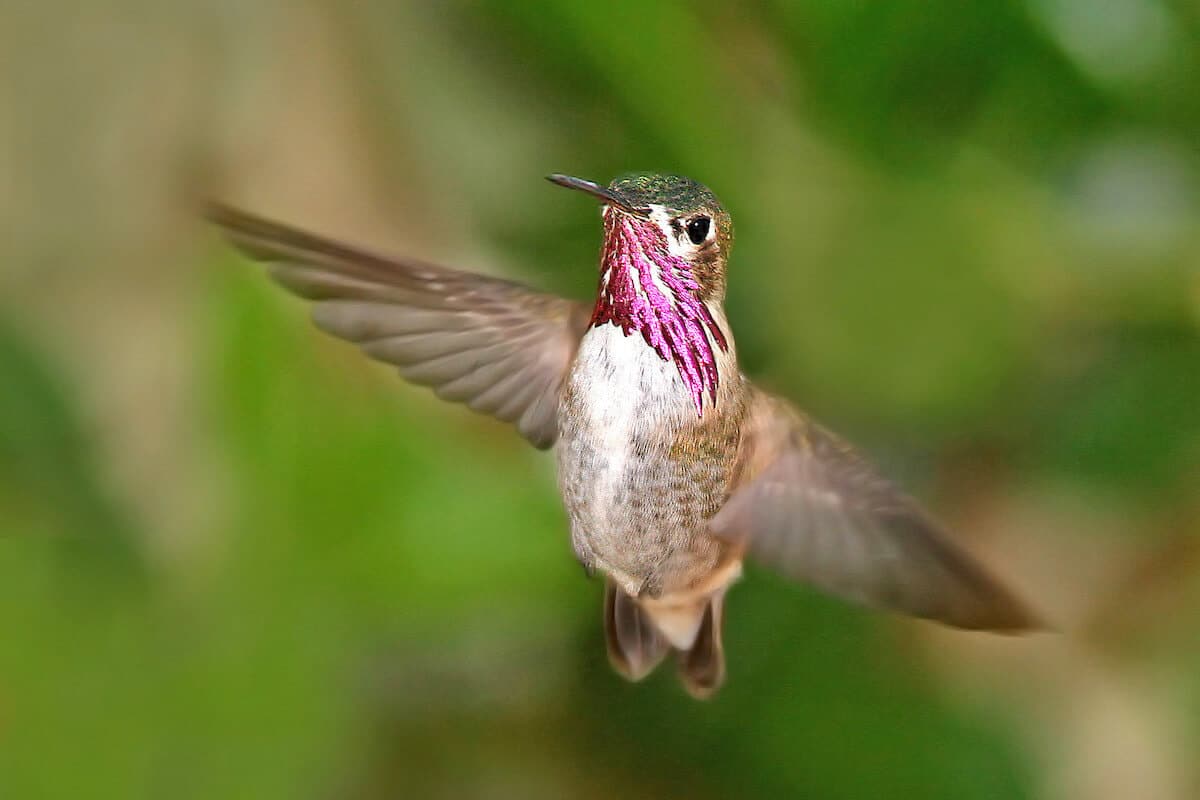 There are 352 species of hummingbirds in the Americas, with as many as 15 of those species regularly occurring in the U.S. and Canada. An additional 9-10 species will occasionally make an appearance in the states and are considered vagrants. The species we are looking at in this article is the Calliope hummingbird, a visitor to southwestern Canada, the western United States and southwestern Mexico.

We’re about to show you some up-close and personal images of this amazing species, and share some interesting facts and information.  Without wasting anymore time, let’s get to the good stuff!

Calliope hummingbirds are often considered to be the smallest birds in the United States. But that doesn’t stop them from traveling more than 5,000 miles between their winter and summer grounds every year. Perhaps because of the males strands of pink feathers or their mating dance, these hummingbirds are named after the Greek muse Calliope. Calliope was chief among all muses, especially when it came to eloquence and epic poetry.

As mentioned above, Calliope hummingbirds are very small, even smaller than other hummingbirds in the U.S. This size difference is easiest to see if the Calliope is in a group of other hummingbird species. They also have a shorter bill compared to other hummingbirds. Their tail is short, broad and un-forked. Both sexes have green heads and backs, with darker feathers along the edge of the wings and tail.

Males have magenta feathers that extend from the underside of the bill, down the throat and onto the sides of the chest. Unlike many other hummingbirds that have a solid block of color on the throat, the Calliope’s throat colors are in long streaks.

Females (and juvenile males) do not have the magenta throat feathers. Their throat is mostly white with some fine spotting. They have a peachy-buffy wash along their undersides. The corners of the tail show some white. They closely resemble the female Rufous and Allen’s hummingbirds, however those hummers are larger, have longer bills, and the peachy coloring on their sides is heavier and darker.

While on their breeding grounds, males can be quite aggressive when defending their territory. They like to perch on exposed branches, especially alder and willow, that give them a good view of the area they want to protect. Even though they are tiny, they will buzz around and attempt to chase off just about any other bird species they don’t want too close, even large birds like robins or hawks! 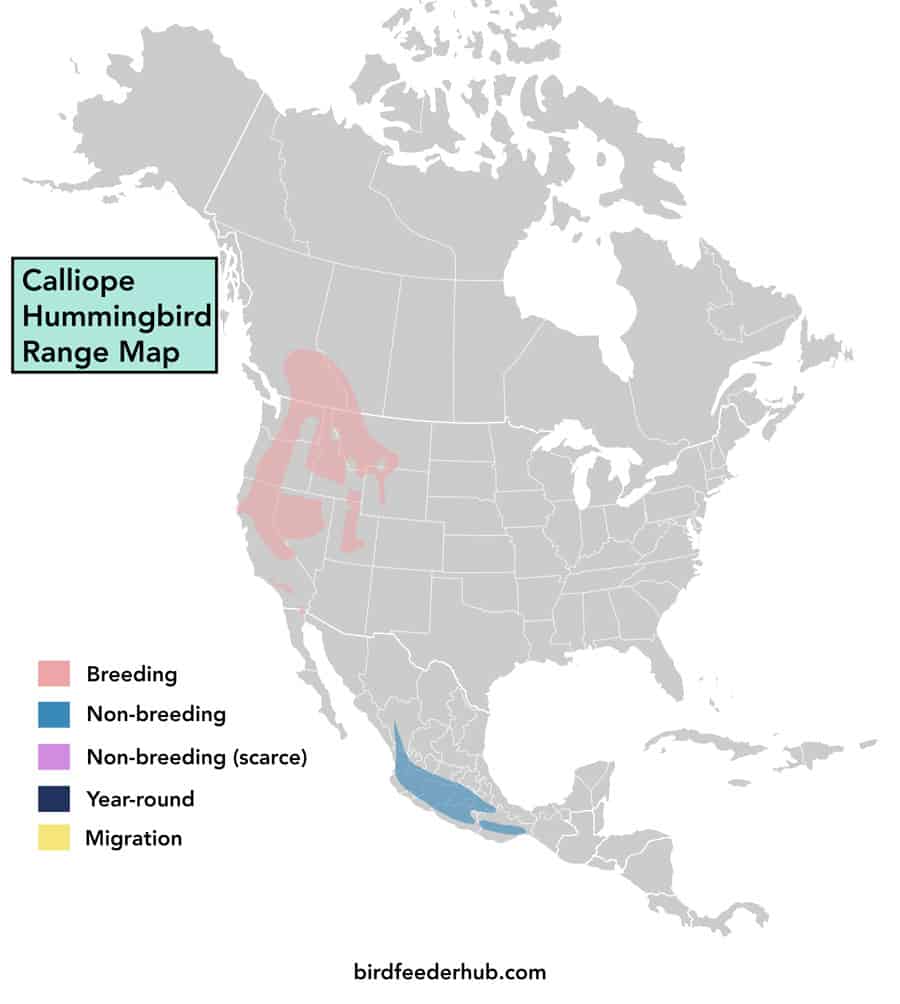 There is some indication that their range may be expanding during the winter, with more Calliope’s being recorded in the southeastern U.S. than in previous years.

Like all hummingbirds, the Calliope drinks from nectar producing flowers. They also catch insects by “hawking“, sitting on a perch until an insect gets close then quickly flying out to catch it mid-air. Calliope hummingbirds are also known to drink tree sap from holes made by sapsuckers. They may even eat insects that have become stuck in the sticky sap.

When in Mexico, the Calliope likes pine-oak forests, thorn forests and scrubby forest edges. When they come to the U.S. to breed, their preferred habitat is cool mountains. Mountain meadows, regenerating forest, montane forest, and willow / alder thickets are all used as nesting areas.

Males put on a diving-display for females, flying back in forth in large, U-shaped arcs. During these dives the make a high pitched call and their tail feathers flutter creating a buzzing sound. They may also hover in front of the female, accelerating their wing beats to create more sound while making their throat feathers protrude.

The male will breed with several females within his territory. But then the female takes over all duties of building the nest and raising the young.

While it varies, the typical elevation for breeding Calliopes is between 4,000 – 11,000 feet. Nests are often built in areas where foliage provides some protection from the elements, such as on evergreen branches.

In fact, nests are sometimes constructed on the branch where a pinecone had previously grown, and the nest itself is made to look similar to a pinecone. The inside of the nest cup has soft plant material, while the outside is camouflaged with bark, lichen and moss.

The calliope migrates north along the Pacific coast in the spring, then back south along the Rocky Mountains in the fall. They spend the summer in British Columbia and select areas of the northwestern U.S. In late August, early September they will begin to head south.

September is a great time for those around the Rocky Mountain region to spot them migrating through. By the end of October most have crossed the border into Mexico. They spend the winter in central Mexico, around Mexico City, and along the western coast in areas around Puerto Vallarta and Colima.

Calliope hummingbirds are also sometimes spotted in Texas and Louisiana during the winter, but not in large numbers. They begin to enter the U.S. again on their way north at the beginning of March. Males often arrive first to stake out their territory.

At the present moment, Calliope hummingbird populations are considered to be stable, and the estimated total is about 4.5 million. 75% of those breed in the U.S. while 25% breed in Canada. Because their winter range is restricted to a relatively small area, there is concern that future human land-use changes or natural disasters could have a big impact on the overall population.

Calliope hummingbirds will visit backyards and feeders within their range. Like most hummingbirds, a nectar feeder, flowering plants and water are all great ways to attract them to the yard.

1. Calliope’s are the smallest birds in the United States

Significantly smaller than even the smallest of the warblers, they weight about the same as a ping-pong ball or penny!

Research has shown that during the males courtship diving display, the air passing through their wing and tail feathers each makes its own distinct sound. These two feather sounds combined with vocalization make three separate sounds, each with their own acoustics, that may be communicating different messages to attract females.

3. Calliope hummingbirds can go into torpor to conserve energy

Even summer nights can be really cold when you spend your time in the Rocky Mountains. To conserve energy, the Calliope can spend the night in a semi-hibernation state called torpor. Deeper than sleep, in torpor metabolism and body temperature drop way down so the hummingbird doesn’t have to use as much of its fat reserves.