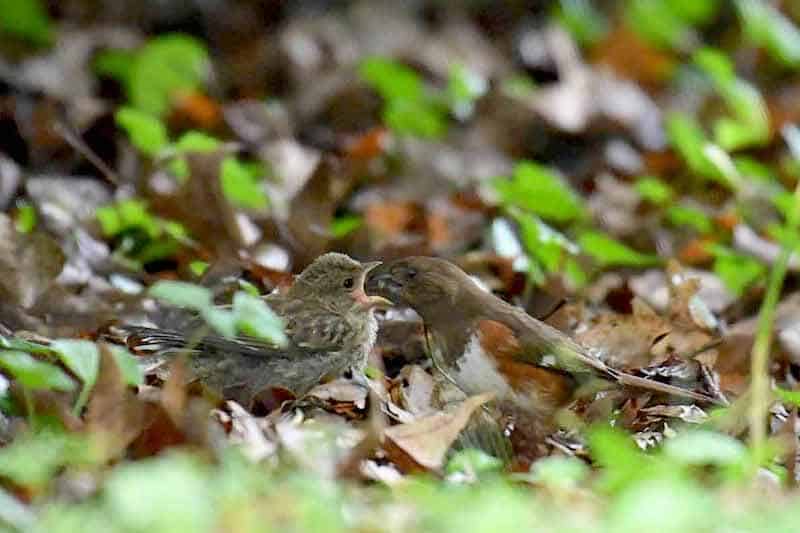 Newly hatched baby birds are pretty helpless. Most are born with eyes closed and no feathers. As they quickly grow they are able to move around the nest a little more. If you’ve ever watched a nest with babies you may have wondered, can a mama bird put her baby back in the nest? Are babies able to make it back in the nest if they fall out? In this article we will look at answers to these questions and what you can do if you observe a baby out of the nest.

Can a Mama Bird Put Her Baby Back in the Nest?

If you’ve ever found a baby bird outside of the nest, you may be wondering if the mama bird is able to put her baby back in the nest if it escapes. Typically no, most adult birds are not able to pick up their baby to put it back in the nest.

Many mammals are born with a “scruff”, which is a loose area of non-sensitive skin found at the nape of the neck. Adults are able to pick up their young by the scruff using their mouth/teeth. Not only does this not hurt, but they instinctively become docile and immobile, allowing the parent to more easily transport the baby. You have probably seen cats do this with their kittens.

Bird are not born with a scruff. Between their somewhat sharp beak and feet with claws, there isn’t a very safe way for them to get a grip on their babies. But even if they could, most birds simply do not have the necessary muscular strength to lift the baby’s weight.

For birds that nest on the ground, this isn’t a problem. If a baby wanders away from the nest it is probably enough enough to do so, and the parent can try and corral it back to the nest site. But for small birds that nest higher up in trees, there isn’t anything they can do to move their babies around.

Mother birds work very hard to take care of their nestlings as they spend weeks preparing their babies to leave the nest. Nestlings are the stage in which a baby bird cannot take care of itself in any way and cannot move around much. In a week or two, baby birds become fledglings and are able to be more independent.

Birds That Can Pick Up Their Babies

Only birds with strong beaks or talons can pick up their babies. Some of these birds include hawks, falcons, and storks. However, these birds typically only use their strength to pick up a baby bird to remove it from the nest. Sometimes baby birds become ill and can die in the nest, which poses a risk to the other babies. In this case, larger birds use the strength of their talons or beak to remove the dead baby bird to keep the other babies healthy.

Sometimes mother birds will transport their babies on their back through water. This is most common in waterfowl species such as ducks, loons, coots, grebes and swans. The mother bird does not put the baby on her back. The babies only do this when they are strong enough to hop on the mother’s back by themselves.

What If a Baby Bird Falls Out of the Nest?

People commonly mistake young birds on the ground as abandoned by their parents. On most occasions, baby birds found on the ground outside of their nest are supposed to be there. The “fledgeling” stage of development is when a baby bird is big enough and has developed enough feathers to survive outside the nest. However, most fledglings are still unable to fly at this stage.

Parent birds keep a close eye on their fledglings, and will visit them often to bring them food. So even if you find a baby on the ground that still looks young and can’t fly, that doesn’t mean you need to worry. It is likely a fledgling that will only be in this stage for a few more days before it is able to hop around and fly short distances on its own.

Where they might actually be trouble for the baby bird is if it is only in the nestling stage. Nestlings refer to the babies that are newly born, do not yet have feathers or only a few downy feathers, and should not leave the nest.

Nestlings are typically less than a week old, depending on the species. They do not yet have enough feathers to keep themselves warm, cannot feed themselves, and cannot survive independently. If a nestling falls out of the nest, the mother bird will most likely abandon it. Even if she could visit it to feed it, it can’t survive long without her body heat and the protection from the elements it receives in the nest.

Can You Pick Up a Baby Bird and Put It Back in the Nest?

When determining if you should put a baby bird back in the nest, you first need to identify whether it is a nestling or fledgling. If the bird is a fledgling, it should be left alone. Fledglings may not have their full feathers in yet, but will at least be covered in soft and wispy down feathers. Their eyes will be open and alert, and they may be able to slightly ruffle their feathers and flap their wings even if they can’t take off. Nestlings will be almost totally bald with bare pink skin and eyes that are either still shut or barely open.

Can I pick up a nestling?

If the baby bird is a nestling, you may gently pick it up and place it back in the nest. Nestlings should be handled with extreme care. They have extremely fragile bones and if they are not handled very gently, you could cause an injury.

You may have heard that the mother bird will “smell” human scent on the baby if you touch it and that will cause her to abandon it. This is a myth. Birds don’t have a very good sense of smell to begin with, and wouldn’t be able to detect your scent. Even if they could, birds do not abandon their young lightly, certainly not because they smelled a certain way!

When Do Baby Birds Leave the Nest?

Once nestlings begin to grow enough feathers and the strength to prepare for flight, they leave the nest. This is during the fledgling stage. The time it takes for a nestling to become a fledgling depends on the specific species of bird.

What should I do if I find an abandoned baby bird?

If you find a fledgling on the ground, do not touch it or assume it is abandoned. It is likely that one of the parent birds is still attending to it. Many wildlife rehabilitation centers receive fledglings that people have mistaken as abandoned, but were still being cared for by their parent. You can keep an eye on the fledgling from a distance to see if the mother or father comes to care for it. We have a handy flow chart you can use, and wrote a whole article about finding abandoned baby birds here. 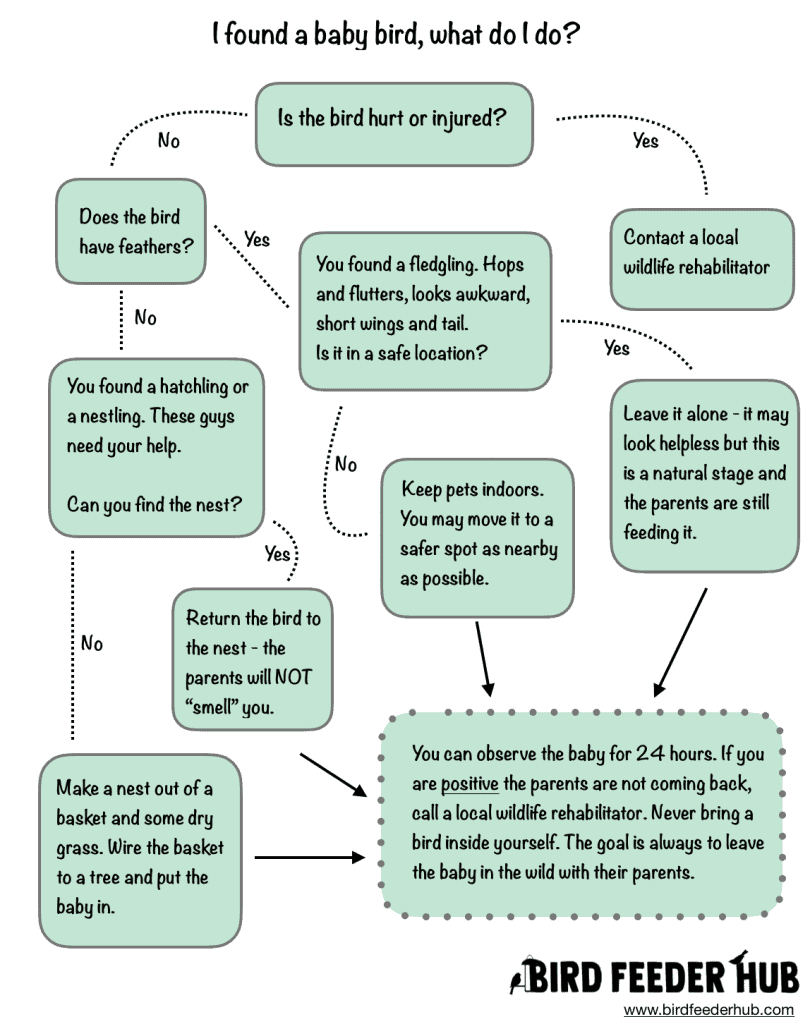 Most bird species do not possess enough muscular strength or the ability to pick up their babies. Adult birds are aware that if they tried to pick up their live nestlings, it could injure them. If a baby bird dies while in the nest, most birds will try to remove it to protect the other birds from germs and diseases. Nestlings aren’t very mobile and will rarely fall out of the nest, and most baby birds seen outside of the nest are fledglings that are old enough to be partially on their own.