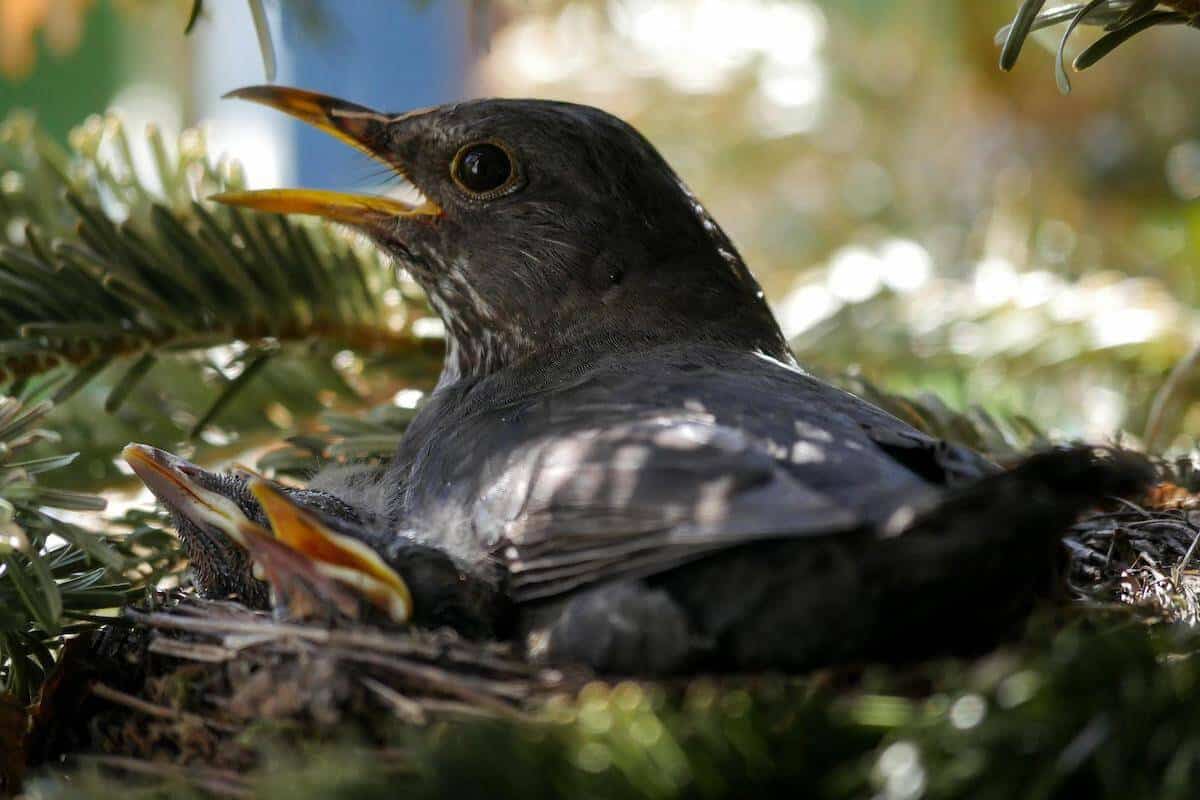 When do baby birds leave the nest depends on the species of the bird. For most birds, however, the young typically leave the nest somewhere between 12 and 21 days old. During the time in the nest, their parents take care of them, bringing them food and protecting them from predators. Even after they leave the nest, most species of birds will continue to care for their young for several more days.

When 9 types of baby birds leave the nest

In this article, you will find detailed information about 9 common bird species and the timeframe for when their babies leave the nest. This information will give you a better understanding of birds and their nesting characteristics. 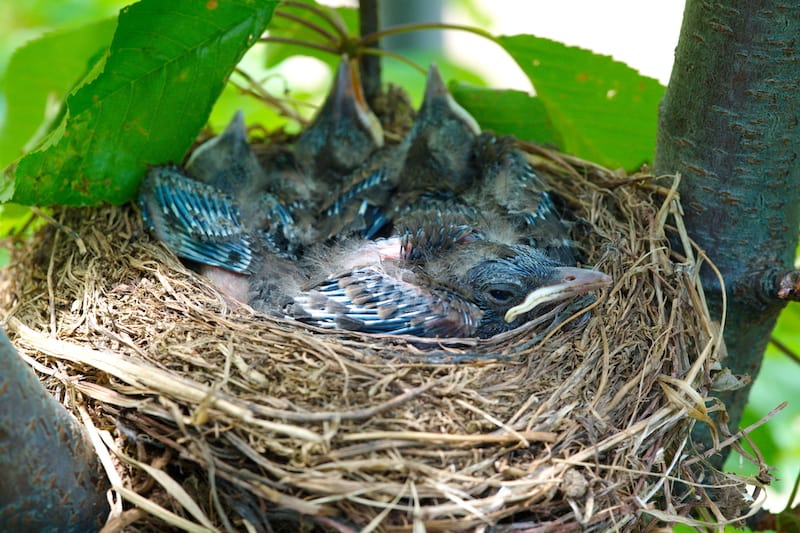 Blue Jays are large songbirds that have bright blue, white, and black plumage. They are also well-known for being noisy birds with loud calls. Both the male and female will sit on the eggs, which take about 16 to 18 days to incubate. The baby Blue Jays leave the nest between 17 and 21 days after emerging from their egg.

Blue Jays are known to steal and eat the nestlings and eggs of other birds. While most of their diet consists of nuts and insects, during a study of Blue Jays and their feeding habits, it was found that 1-percent of the Blue Jays had eggs or birds in their stomach.

The Northern Cardinal is a songbird with a long tail and thick bill. The males of the species have brilliant red feathers with black trim around their bill, while the females have light brown feathers with a reddish tinge.

The female Northern Cardinal does most of the nesting building, though the male will sometimes bring nesting material. It can take up to 9 days to build the nest, which they typically only use once. They usually lay between 2 to 5 eggs and will incubate these eggs for up to 13 days. Once they hatch, the babies stay in the nest until they are 7 to 13 days old. 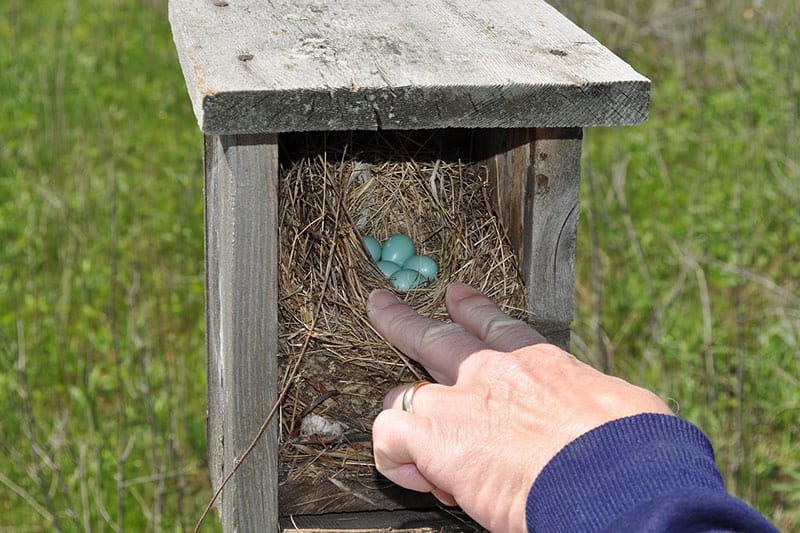 The male adult Eastern Bluebird has bright blue plumage, and a rusty-colored chest and throat. The female has gray plumage with a blue-tinged tail and wings, and a brownish orange breast.

The Eastern Bluebird commonly nests in old woodpecker holes, with the female of the species taking on all the nest building responsibilities. The female will lay between 2 to 7 days per nesting, and will incubate the eggs for 11 to 19 days. Once hatched, the babies will stay in the nest for 16 to 21 days before leaving.

A fun fact about Eastern Bluebirds is that they typically don’t visit backyard feeders as regularly as other birds, unless the feeders are filled with mealworms.

The American Robin is a common sight throughout the United States, often seen hopping through yards grabbing insects along the way. American Robins lay between 3 to 7 eggs per nesting, and the eggs are colored in that iconic blue known as “robin egg blue.” The female incubates the eggs for 12 to 14 days, but both the male and female will feed the babies after hatching.

The babies will leave the nest between 14 and 16 days after hatching. The male American Robin tends to the young birds after they have left the nest, while the female gets busy attempting to next a second time.

While both the male and female American goldfinch pick out the perfect site to nest, the female is the one who does the nest building. She will then lay 2 to 7 eggs, which will take 12 to 14 days to incubate. After hatching, the babies will stay in the nest for about 12 to 15 days before leaving.

Crows are large, intelligent birds with all black feathers. Both the male and female crow will build the nest, which is made up of twigs, weeds, pine needles, and animal hair. The female will lay between 3 and 9 eggs and will incubate the eggs for up to 18 days. Once hatched, the baby crows will stay in the nest for 30 to 40 days.

Despite sharing the same name, house sparrows are not related to the other North American sparrows. These sparrows are built chunkier with a round head, short tail, and full chest. Their feathers are various hues of gray, white, black, and brown.

The female lays 1 to 8 eggs up to 4 times a year. They incubate the eggs for 10 to 14 days. Once hatched, the baby house sparrows will leave the nest within 15 to 17 days. It is not uncommon for the house sparrow to take over the nests that other birds have abandoned. 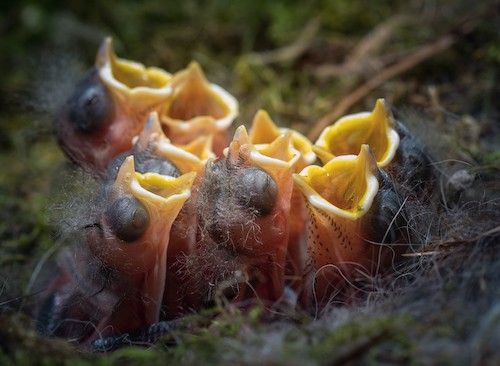 Chickadees are small birds with a spherical-shaped body and feathers in various shades of white, gray, and black. The female of the species typically chooses the nesting site, but both the male and the female will excavate the cavity. Once ready, the female will build the nest and then lay 1 to 13 eggs.

The black-capped chickadee only has one brood a year. The eggs incubate for up to 13 days, and the babies will remain in the nest for between 12 to 16 days after hatching. At first, the female typically remains with the babies while the male chickadee brings food. As the babies get older, however, both the male and the female will leave to search for food.

Killdeer are ground-nesting birds that will lay 4 to 6 eggs up to 3 times per year. The incubation period of these eggs is between 22 and 28 days. Unlike other birds, however, the baby killdeers typically leave the nest the day after they have hatched. They hatch with a full coat of feathers and can walk out of their nest as soon as these feathers have dried. Once they leave the nest, their parents will care for them for about 10 days before letting them off on their own.

A fun fact about these interesting birds is that to distract predators from their young, the adult killdeer will act as though it has a broken wing, twisting one wing against its back and dragging itself.

As you can see, when do baby birds leave the nest depends on the species. Although for most birds it is between 12 and 21 days. Some birds will leave their nest within 24 hours after hatching, while others stay for several weeks. This just goes to show you that each species of bird has its own specific characteristics that make it unique.