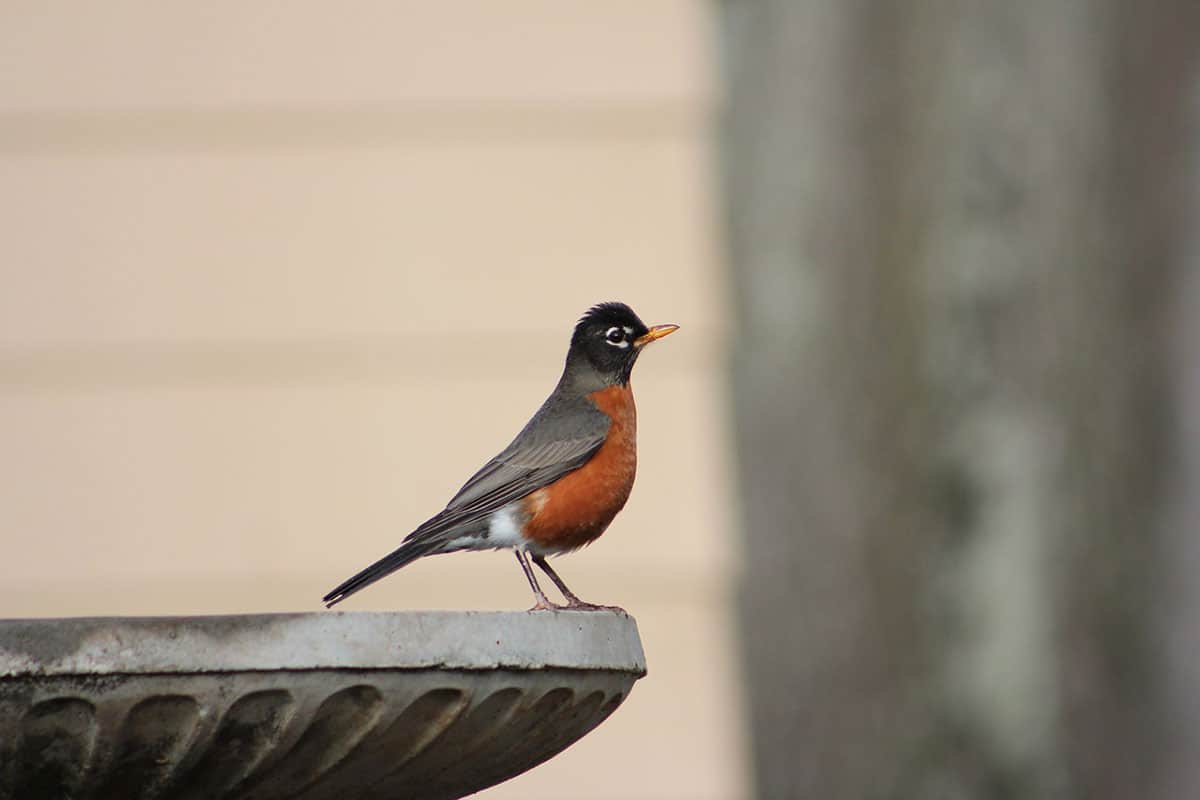 With it’s red-breast and frequent, chipper call, the American Robin is one of the most easily identifiable birds in North America. They’re numerous and widespread across the United States and Canada —where they’re often spotted foraging in backyard lawns, parks, and other common areas. Though you’ve probably seen countless robins in your life, do you really know that much about them?

Take a look these fun and interesting American Robin facts that we’ve compiled for you, enjoy!

Thrushes include any species of the family, Turdidae, which belongs to the songbird suborder, Passeri. In general, thrushes have slender bills and stout, scaleless legs. They typically vary from 4.5-13 in in length and are found world wide. Other examples of thrushes are Blackbirds, Bluebirds, and Nightingales.

2. AMERICAN ROBINS ARE THE LARGEST THRUSHES IN NORTH AMERICA

As far as songbirds go, American Robins are pretty big — they’re the largest thrush found in North America. They have large, round bodies with long tails and lanky legs. The other thrushes native to North America include Bluebirds, Wood Thrushes, Hermit Thrushes, Olive-backed Thrushes, and Gray-cheeked Thrushes.

American Robins eat a varied diet of insects, berries, fruits, and especially earthworms. It’s very likely to spot a robin while it’s foraging for earthworms on your lawn or holding one in it’s beak. They’re also a common sight at feeders, where they’ll typically eat suet and mealworms. They don’t normally eat seeds or nuts, but you may rarely catch them eating from a seed feeder.

4. EARTHWORMS ARE A KEY FOOD SOURCE FOR AMERICAN ROBINS

Though they eat a wide variety of foods, earthworms are the crucial ingredient in an American Robin’s diet. Worms and other invertebrates make up 40 percent of these birds’ diets, and a single Robin can eat 14 feet of earthworms in a day. In the summer, worms alone make up to 15-20 percent of their diet.

It was previously assumed that American Robins heavily relied on their sensitive hearing to locate worms moving underneath the soil — but it’s not just their sense of sound that helps them find food. Like most birds, American Robins have keen eyesight that helps them spot even the most subtle shifts around them when foraging for worms. They have monocular vision, meaning they’re able to use each eye independently to observe any movement around them.

6. AMERICAN ROBINS EAT DIFFERENT FOODS DEPENDING ON TIME OF DAY

In the morning, American Robins tend to eat more earthworms than during other times of day, possibly because they are more plentiful during this time. Later in the day they switch over to fruits and berries. This goes for seasons as well, American Robins will eat more worms when they are plentiful during the spring and summer, then transition to a berry and fruit based diet when the ground turns cold.

American Robins have a complex voice box known as a syrinx, the bird version of a human larynx, that allows them to make a wide range of calls and songs. They sing frequently and are often heard throughout the day, but especially in the morning where they are common members of the dawn chorus of songbirds.

Though American Robins can brood up to three times a year, two broods is usually the average. During this time, around four eggs are laid by the mother, though she can lay up to seven. The mother then incubates them for 12-14 days until they hatch. Babies will remain in the nest for another 14-16 days before fledging.

9. AMERICAN ROBINS DEPEND ON PARENTS AFTER THEY LEAVE THE NEST

Young American Robins remain close to mom and even after they’ve left the nest. They remain on the ground, staying near their parents and asking for food for about another two weeks, until they can fully fly on their own. At about one year they are full breeding adults.

Though males may provide some help when it comes to nest building, females are the primary builders. They use twigs, roots, grass, and paper to form most of the cup-shaped nest, with a firm inner layer of mud for durability. The inside is then lined with fine grasses and plant fibers.

11. FEMALES ARE RESPONSIBLE FOR BLUE EGGS

A well known fact about American Robins is that their eggs are a unique light blue color. They even have the color trademarked — robin’s egg blue. It’s the females you can thank for this beautiful color. Their blood contains the hemoglobin and bile pigments that turn the eggs blue while they’re still forming.

12. NOT EVERY NESTING PAIR WILL SUCCESSFULLY REPRODUCE

It’s not easy being an American Robin. On average, only 40 percent of nesting pairs will successfully produce offspring. Out of the young that eventually fledge the nest, only 25 percent make it till winter.

The Brown-headed Cowbird is notorious for sneaking it’s eggs into bother birds’ nests so that their offspring is taken care of. While they attempt to put their eggs in American Robins’ nests, it’s rarely successful. American Robins usually reject these eggs before they hatch, and even if the eggs do hatch the offspring typically don’t survive to fledge.

14. MALES ARE THE FIRST TO ARRIVE AT NESTING GROUNDS

During breeding season, which begins in April and lasts through July, males will arrive first to nesting grounds in order to stake out territory. They defend their area from other males by singing or fighting. In general, American Robins start their breeding season earlier than other birds.

15. AMERICAN ROBINS ARE SOME OF THE MOST COMMON BIRDS

American Robins are widespread and common. It’s estimated that there are over 300 million American Robins in the world and they are one of the most numerous types of backyard birds in North America. Their numbers are so abundant, that they often serve as environmental markers for determining the health of the local ecosystem. 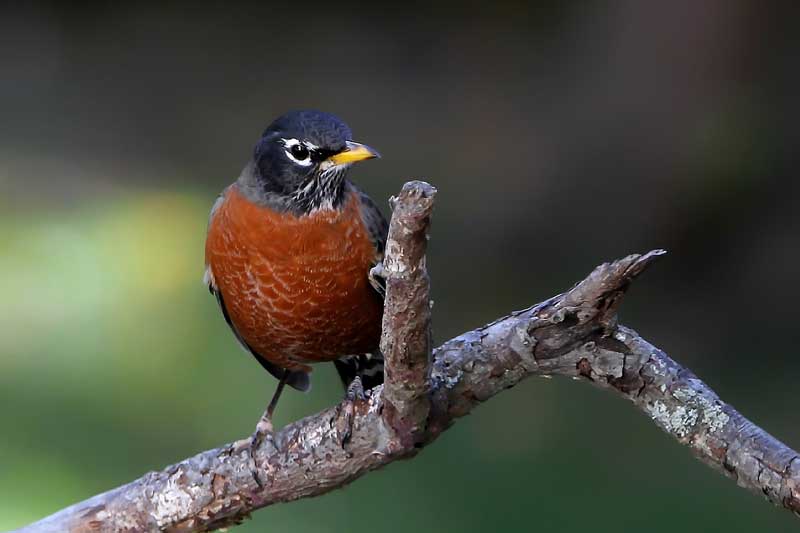 With many birds, there are noticeable coloration or size differences between males and females. However, male and female robins look very similar and can be tricky to tell apart. The only key difference is that females have duller coloration than males, but even still there are overlaps.

17. AMERICAN ROBINS GET THEIR NAME FROM EUROPEAN ROBINS

Like it’s name implies, the American Robin is native to North America. When early settlers began to colonize along the eastern coast, they named this bird “robin” after the similarly red-breasted European Robin they were familiar with from back home. European Robins are smaller than their American counterparts, with lighter plumage, paler heads, and shorter wings.

Over 120 kinds of birds include the word “robin” in their name. However, this doesn’t mean they are all related, or even very similar, to American Robins. These other birds include robin-chats, magpie-robins, and bush-robins. There are also unrelated, ground-feeding members of the family Muscicapidae in Australia and New Guinea that are called robins, such as Scarlet Robins.

19. THERE ARE 7 SUBSPECIES OF AMERICAN ROBINS

American Robins can fly up to 20-35 miles per hour depending on weather conditions. The type of flight they are engaging in also determines how fast they fly. For example migrating birds flying at higher altitudes tend to fly faster than birds casually flying around a suburban neighborhood.

21. MANY AMERICAN ROBINS ARE STILL AROUND DURING THE WINTER

Although American Robins are associated with the coming of Spring, it doesn’t mean they disappear in the winter. There are many American Robins that remain in their breeding range when winter comes around. However, they mostly spend this time in their nests tucked into trees so you just don’t notice them.

At night, American Robins gather in flocks to roost together. These roosts can be very large, up to a quarter-million birds in the winter. Females stay in their nests during the breeding season, but males will go to join the roosts.

One of the most interesting facts about American Robins is that they sometimes get drunk. During the fall and winter, American Robins tend to eat more berries and fruit. Those that eat a large amount of fallen, fermenting fruit sometimes become intoxicated due to the alcohol created in the fermentation process. Some of fruits and berries likely to cause intoxication as they ferment include huckleberries, blackberries, juniper berries, and crabapples.

24. THE AMERICAN ROBIN IS ONE OF THE MOST POPULAR STATE BIRDS

The American Robin is the state bird of not one, but three different states; Connecticut, Michigan, and Wisconsin. It’s familiar likeness is also frequently spotted on flags, coins, and other symbols as well. 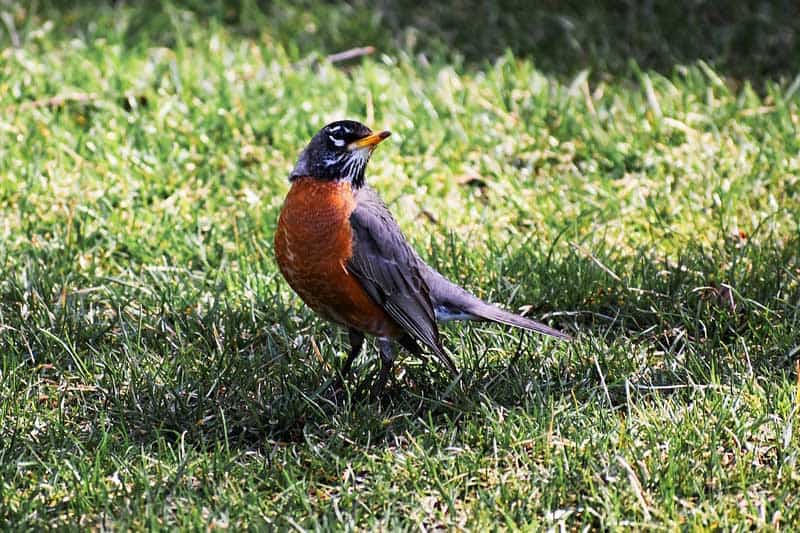 It’s not easy being small — there are a number of threats that American Robins must watch out for. Young robins and robins’ eggs are vulnerable to snakes, squirrels, and even other birds such as Blue Jays and American Crows. Domesticated and feral cats, foxes, and accipiter hawks are other dangerous predators for adult robins.