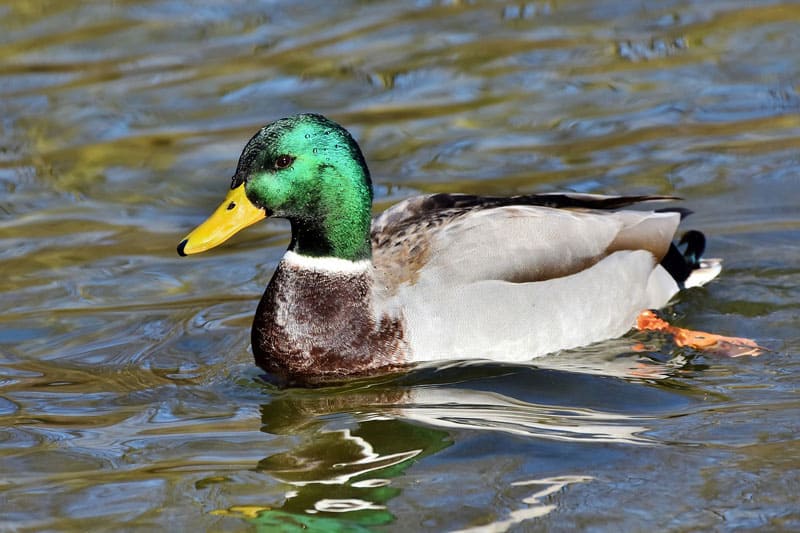 Ohio’s proximity to the Great Lakes, and it’s position along migratory routes, means that the state is full of all kinds of waterfowl. These birds popular with birdwatchers and hunters for their beautiful plumage as well as the beauty of the environments they’re typically found in. This article is all about the ducks in Ohio.

Ohio is home to at least 18 duck species. Some are here during the breeding season only, while others live here year-round. Below is a list of 18 Ohio ducks that we were able to confirm to at least be part-time residents to the state. 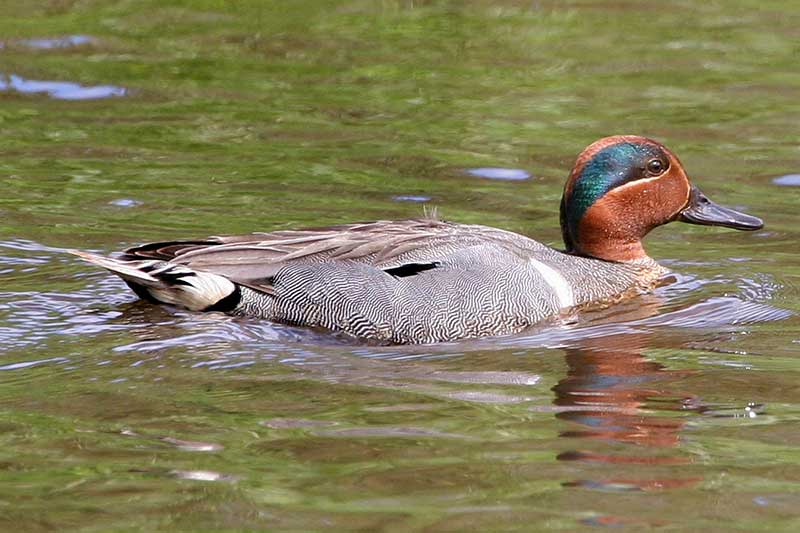 The smallest of dabbling ducks in Ohio and North America, the green-winged teal can be found in Ohio every fall and spring as they migrate between their breeding grounds and their wintering grounds. These fast flying birds will pass through the state quickly, so birdwatchers should keep a close eye on the skies during migration season if they want to spot them.

Males have a brown head with a dark green patch surrounding the eye. Females are mottled brown, but usually slightly darker brown than other “dabbling” ducks. 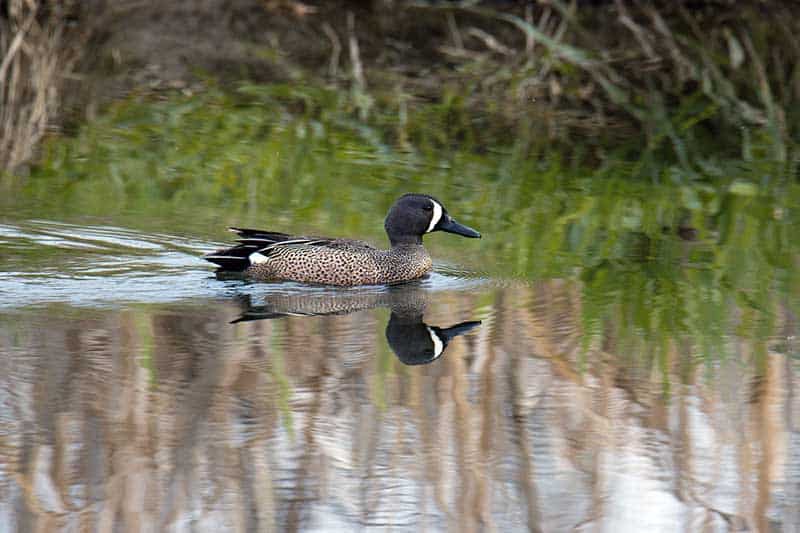 Blue-winged teals migrate south earlier than most species, as they’re very sensitive to cold weather. They favor small lakes and back bays. They’ll begin to migrate south at the end of September, and some travel as far as Colombia.

In Ohio, there’s a small sliver of land along the shores of Lake Erie that falls within their breeding range, but in most of the state you’ll only see them as they migrate. Males sport a dark head with a large white crescent in front of their eye, and a light blue patch on their upper wing. Females are mostly mottled brown. 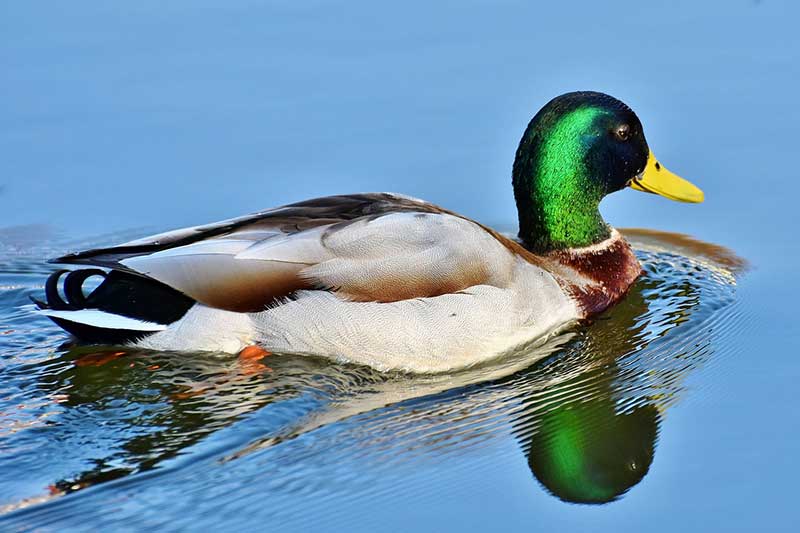 Mallards might just be the most famous duck species. The distinctive green heads of the males are probably what most people picture when they think of wild ducks. In Ohio, these ducks can be found throughout the state in lakes, ponds, and wetlands and in urban, suburban, and rural areas. They live here all year long.

The pintail is one of the largest ducks in Ohio as well as North America. Pintails are migratory, and Ohio lies along one of their major migration routes. There is, however, a breeding population in the northern part of the state that lives here all through the summer months. Male pintails have an elegant shape with a slightly long neck and a long upturned tail. 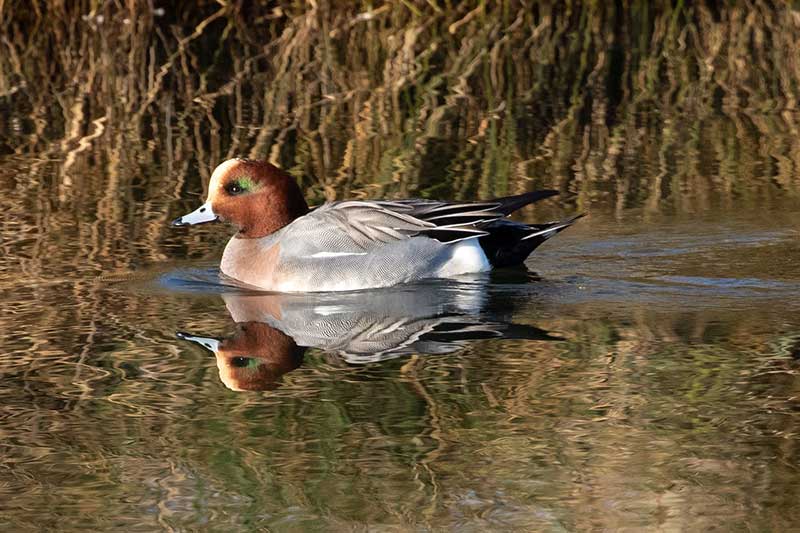 Wigeons have no permanent presence in Ohio, but you’ll spot them every fall and spring as they migrate through our skies. They love open wetlands, especially wet grasslands. You may have a hard time finding them on the ground, as Ohio is a flyover state for them. Both male and female wigeons have a light blue bill with a black tip. Males have a small “metallic” green patch coming off the eye.

Wood Ducks are small perching ducks that like to stay close to the woods. They’re common all over Ohio during the summer breeding season, and they prefer wooded swampy areas, shallow lakes, and marshes. Males are arguably one of the most striking ducks, with multiple colors, stripes and patterns, and a bright red eye. Females are mostly gray-brown with a white tear drop shape around the eye. 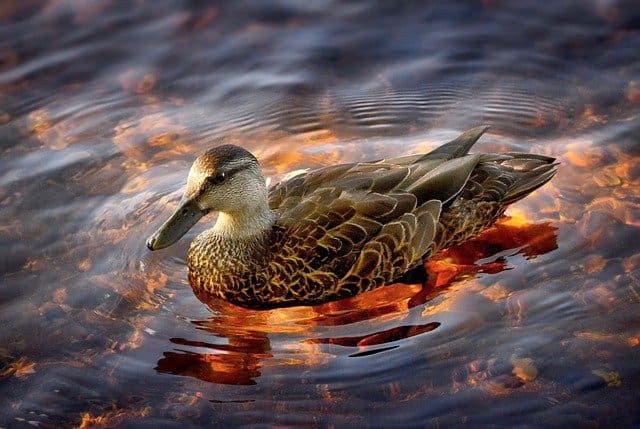 The black duck, named for its dark, monotone colors, is found throughout Ohio. In the northeast corner of the state, there’s a year-round population. In the rest of the state there’s a population of back ducks that spends the winter here. It prefers wetlands, like most ducks, but it can be found in a wide range of habitats. 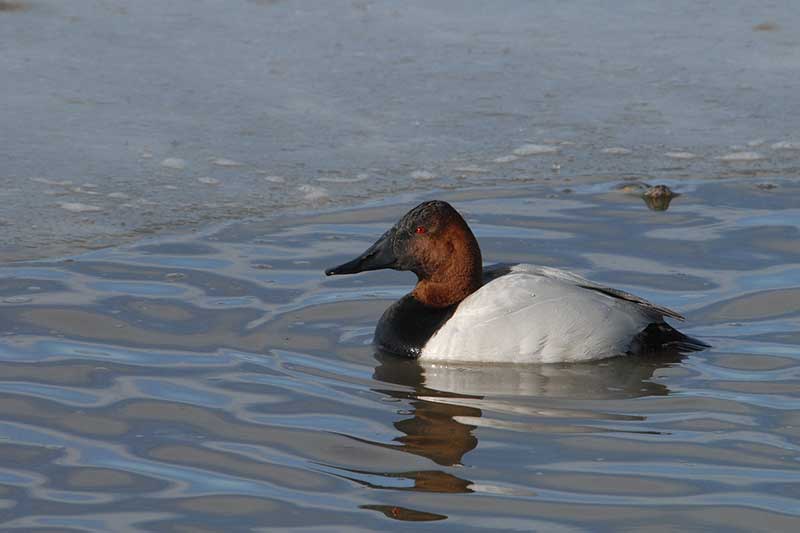 Canvasbacks have a distinctive long, sloping face shape.  Males have a brown head and neck, black chest and white body. There’s a very small portion of southwest Ohio where they winter, but in most of Ohio you’ll only find them as they migrate in the fall and spring. You’ll find them in prairie wetlands, sometimes called prairie potholes.

Named for the redheads of the males, the redhead duck can be found along the shores of Lake Erie all year long. They also winter in the southwest part of the state, and the remainder of Ohio is under one of their main migration routes. They favor small wetlands in open, non-wooded areas, which means you can often find them alongside canvasbacks. 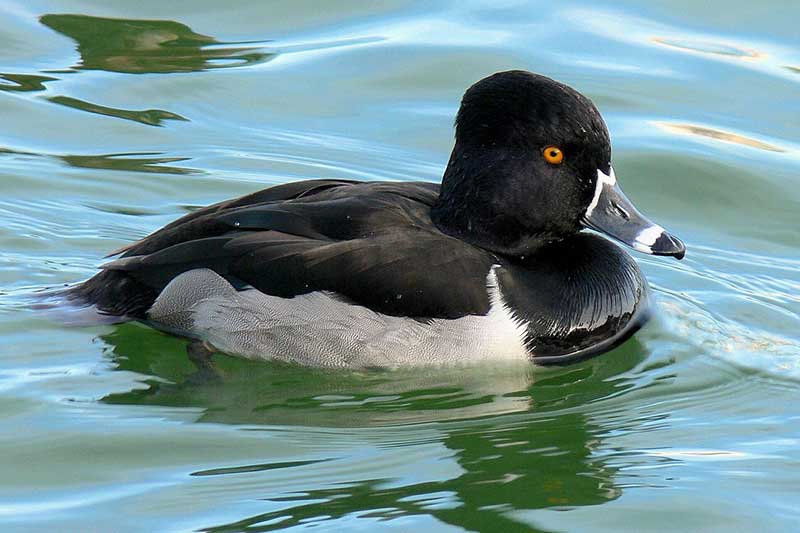 Ringnecks are a diving duck, and can be found throughout most of the state as they migrate south for the winter. They won’t stay here long, as it’s merely a stopover on their way to their wintering grounds. While males and females look different, they both have a blue bill with a white band across the top.

The Greater Scaup can be found in the winter in Ohio along the shores of Lake Erie. These large birds will fly north for the summer to breed in cold northern lakes. They like open water and will rarely be found in Ohio far from Lake Erie. Males have a dark head and chest, white sides and a yellow eye. Females are brown with a white face around the beak, and also have a yellow eye.

The common goldeneye’s can be found throughout all of Ohio in the winter. While they prefer woodland lakes and rivers for breeding, in winter they gravitate to open water in non-wooded areas. Look for them in lakes and large ponds. Males have a black head with a white circular patch underneath a yellow eye. 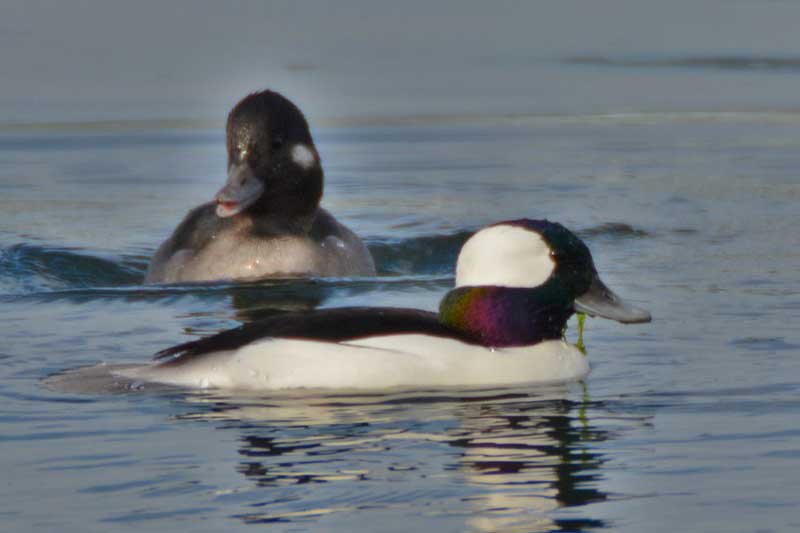 The Bufflehead can be found throughout most of Ohio during the winter months. They rarely gather in large flocks, preferring much smaller groupings. They like large, open bodies of water, which makes lakes a particularly attractive place for them. Males have a distinctive look with white sides, a large white patch at the back of the  head, and an iridescent face. 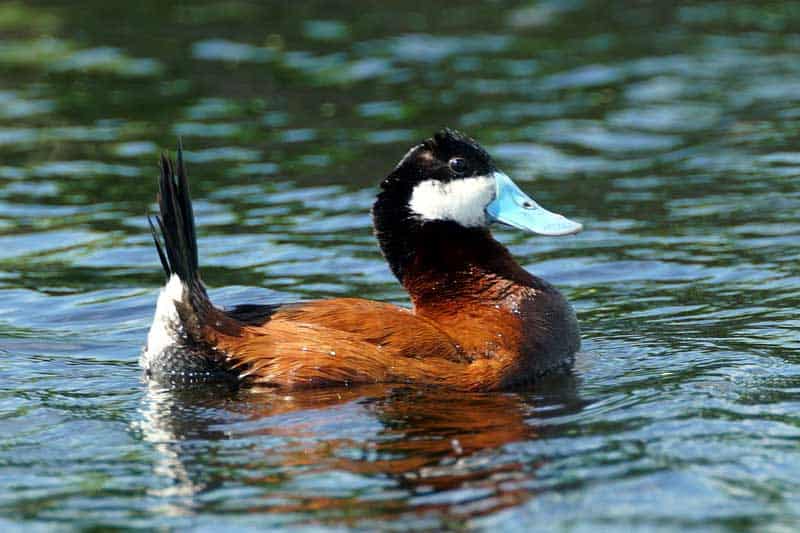 Ruddy ducks breed in marshy lakes and ponds mainly along the northern edge of Ohio. They prefer to live in dense vegetation in or near wetlands, which can make them hard to spot. Ruddy ducks appear to be expanding their range in Ohio. They have a fan-shaped tail which often sticks up, and a compact “stocky” looking body. Breeding males have a bright blue beak, chestnut body and white cheek. 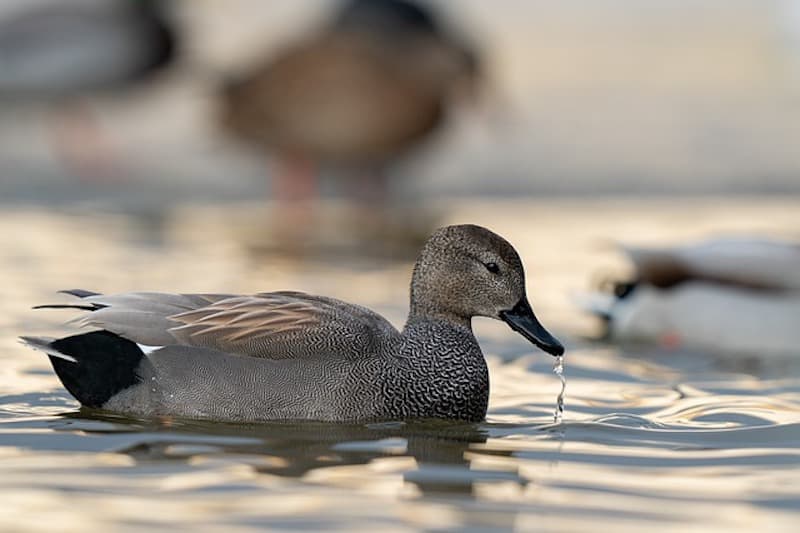 The gadwall is one of the most common dabbling ducks in North America. In Ohio, you’ll most likely find them during the winter months, as this is part of their non-breeding range. They like open wetlands with dense vegetation. 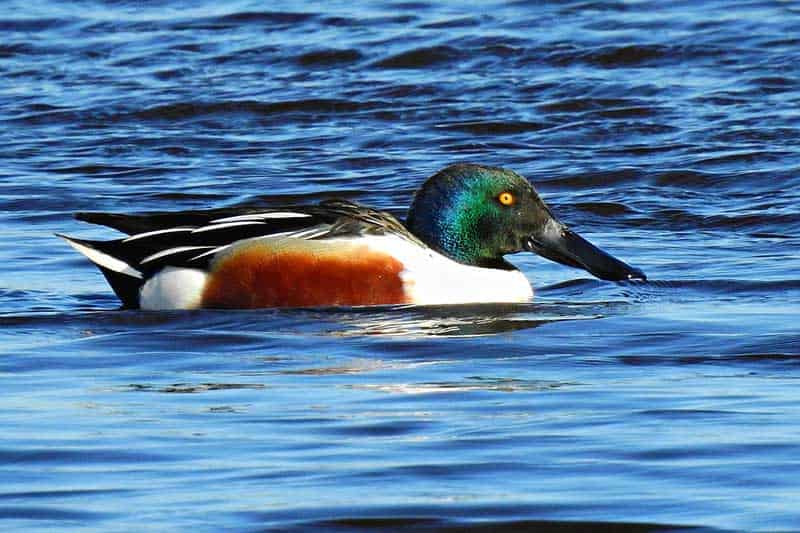 Easily identifiable due to their large, shovel-like bill, the Shoveler can be found in Ohio as they migrate in the fall and spring. Ohio lies along some of their major migration routes as they travel between the northern Great Plains and the coast.

White-winged scoters are the largest North American scoter. Like the other scoters, they’re sea ducks, which means they prefer to winter along the coastline. They’re only found in Ohio as they migrate from their tundra breeding grounds down to the Atlantic coast. You’ll find them along the shores of Lake Erie, resting and feeding on their way to their wintering grounds.

The Long-tailed duck is named for its unusual, ornate tail feathers, which are only found on males. Like other sea ducks, they’re only found in Ohio during their migration, as they travel from the Arctic circle to the Atlantic coast. They pass through Eastern Ohio as they migrate, stopping to rest and eat along the way.