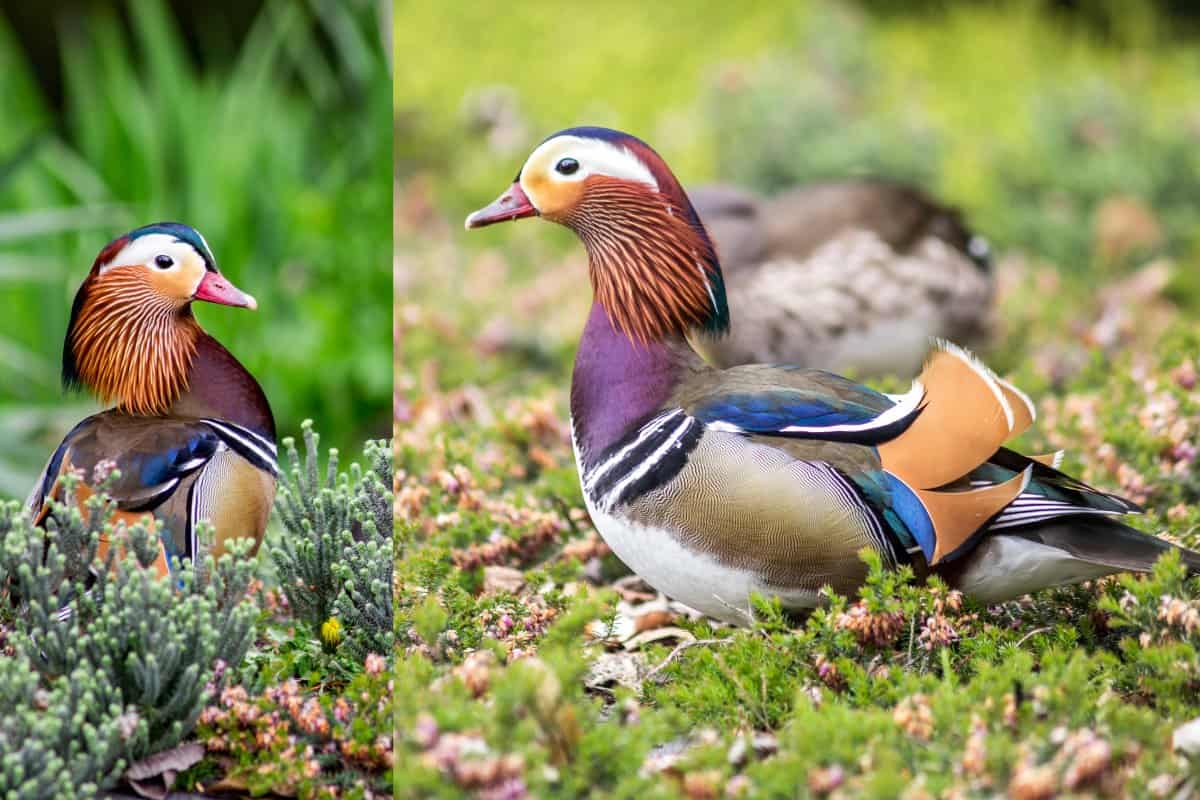 Ducks perhaps aren’t the first type of bird that comes to mind when you think of colorful birds with flashy patterns. While it’s true that most ducks aren particularly flashy, there are a few that really stand out. One of the most brilliantly colored ducks anywhere in the world is the male Mandarin duck.  This delicate duck is a feast for the eyes, especially when it is in full plumage during the breeding season. Continue reading to learn 10 facts about the Mandarin duck.

1. They are one of the most-colorful ducks in the world.

During the breeding season, males are at their most colorful. The way a myriad of colors blend into each other, divided by solid black and white lines, gives them the appearance of a watercolor painting.

Their head had an elegant shape, due in part to the large helmet-shaped crest of iridescent blue, purple and cinnamon. They are white around the eyes, with warm brown cheeks and neck feathers that are shaggy and frilly. They have a purple throat, tawny sides with delicate barring, and orange sail-like feathers that stick up from their wings.

Even their beak is multi-colored, a pinkish-red with a white tip.

2. They are native to Asia and the northern Pacific Islands.

Natural populations of the Mandarin duck dwell in the temperate coastal regions of Asia. Most Mandarin ducks migrate between the southern and northern coasts of mainland China.

A separate population lives year-round on the island of Japan.

The migrating birds spend the spring and summer in northern China and southern Russia. When the seasons begin to change, they fly south where the seasonal conditions are milder. This population is the same one that lives in Vietnam and South Korea during the winter.

Only male Mandarin ducks have feathers in a variety of colors. Like most types of ducks, females are drabber. They are a mixture of gray, black, brown, and cream.

The female Mandarin duck does have a few identifying features, however. She has:

Males, on the other hand, are a bevy of browns, oranges, greens, and blacks. Not only do they have color blocked feathers, but they have different kinds of feathers which work together to create an optical illusion.

They get along in mixed flocks both in the wild and in captivity. Many zoos and parks, even those outside of Asia, include Mandarin ducks as part of their collection because of their beauty and delicate appearance.

Some populations have escaped captivity and formed feral colonies in the marshes and parklands of temperate climates. London, England, is one such city which supports a population of Mandarin ducks.

It is considered lucky to see one because they are more shy than other duck species.

5. They are not hunted for meat.

Unlike other types of ducks, Mandarin ducks are not hunted for their meat or bred for their eggs. Their meat is sour-tasting and widely disliked.

Mandarin ducks are championed for their appearance, however. They are one of the easiest-to-raise types of ornamental duck.

Many breeders and collectors consider them the best duck to raise when starting a collection, especially for a conservatory or a park with water features.

6. They live in wetlands and freshwater waterways.

In the wild, Mandarin ducks prefer to live in undeveloped places near streams, lakes, and rivers. The more rural the area, the better. Most of their diet comes from vegetative material, so it’s important that their home environment is ecologically healthy and free from pollutants.

Their favorite foods are from trees and grasses, such as beech mast and undomesticated grains. Small fish and crustaceans also make it onto that list.

Mandarin ducks forage for food in several ways. Some dabble for the tender shoots and roots of the aquatic plants they love. Others scout along shorelines for new growth above the water.

Most birds prefer to eat in the morning or evening when there are fewer predators out and temperatures are the mildest. They are one of the few types of ducks which routinely climbs into trees.

8. A female Mandarin duck nests in a tree.

Some of the most well-known duck species nest on the ground. Not the Mandarin duck! The female incubates the eggs until they hatch. Once her chicks are hatched and moving, she flies to the ground and vocalizes until the chicks jump down from the nest.

Once they’re all down from the nest, the mother duck begins teaching them how to get along in the world. She usually introduces them to the water right away.

The brood does not return to the nest.

An endearing trait of Mandarin ducks is their tendency to commit themselves to one specific partner for life. In China and Japan, people see Mandarin ducks as a good luck charm for marriages and relationships.

Mandarin duck parents work together to incubate the chicks and defend the territory from threats.

Chicks hatch with a full layer of feathers, strong legs, and the ability to imprint on their mother. It’s important for the parents to be around so that the chicks can learn to forage for food and avoid predators immediately.

10. They have a North American relative with similar features.

The Mandarin duck’s closest living relative is the North American Wood duck. It is the only other member of the genus Aix. As a result of their shared ancestry, both ducks have similar ornate appearances.

They are about the same size. Males of both species are more brightly colored than the females. However, female Wood ducks do have crests like their mates.

They fill a similar ecological niche as well. Both prefer to nest and settle in temperate climates with abundant water sources. They choose areas with less human development over more urbanized places.