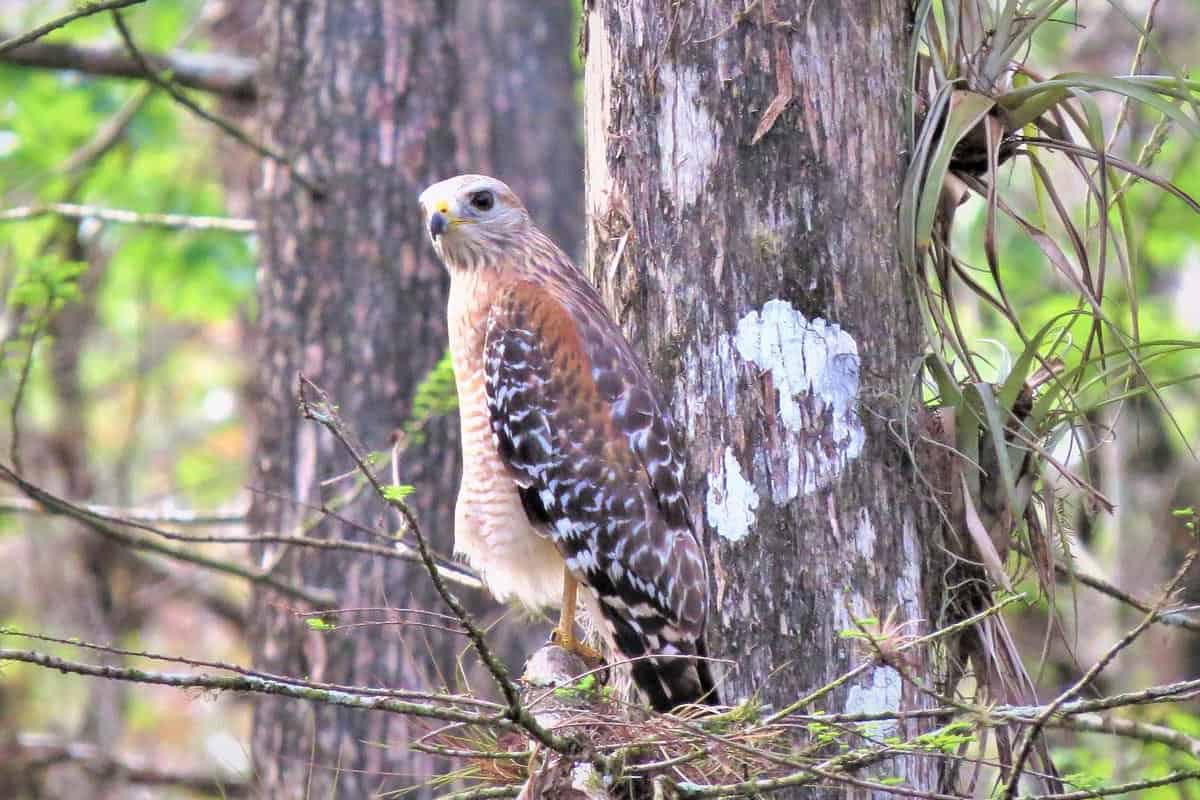 The Red-shouldered Hawk is less common and less well-known than it’s cousin the Red-tailed Hawk, but at one time it was the most common hawk species in much of North America. These hawks are becoming increasingly common in urban and suburban areas, and in some parts of their range the population seems to be growing quickly. Here are 14 interesting facts about Red-shouldered Hawks.

1. Where do Red-shouldered Hawks live?

There are two main populations of Red-shouldered Hawk: an eastern population and a western population. Of the two, the eastern population is much more numerous and widespread. It ranges from southern Canada south through eastern Mexico, living from the Atlantic and Gulf Coasts right up to the eastern edge of the Great Plains. In most of that range they don’t migrate, but the northernmost hawks living in Canada do migrate south and the hawks that can be found in Mexico are only there during the winter.

2. How long do Red-shouldered Hawks live?

Red-shouldered Hawks that survive to adulthood live for 15-19 years in the wild. The oldest known hawk in the wild was estimated to be 26 years old when it died. That makes them remarkably long-lived among wild birds, which tend to have relatively short lifespans.

3. What do Red-shouldered Hawks eat?

Red-shouldered Hawks have a highly varied diet, with many different types of small mammal on the menu. Rodents such as voles, mice, and chipmunks are especially popular. Rabbits and squirrels will be eaten when a hawk’s preferred prey are scarce. They will also hunt amphibians and reptiles, and sometimes other birds and even large insects.

4. What’s the difference between Red-shouldered Hawks and Red-tailed Hawks?

Normally, no. Red-shouldered Hawks aren’t an especially aggressive species and they aren’t known for attacking humans. It is possible, however, that nesting hawks would see humans as a potential predator and may attack if you approach their nest too closely.

In fact, aggressive nesting hawks have become a nuisance in some places. People living close to hawk nests have reported being attacked frequently during the nesting season. Mostly, these are warning attacks and the injuries aren’t severe, but they can still be painful.

6. Where do Red-shouldered Hawks nest?

Red-shouldered Hawks like to build their nests high off the ground, but well below the forest canopy. They prefer broad-leafed trees to conifers and typically build their nests in a fork of the trunk rather than on a branch.

They’ll try to locate a suitable tree near a pond or swamp, but they’ll also nest in suburban parks frequently.

7. Do Red-shouldered Hawks hunt at night?

Red-shouldered Hawks are strictly diurnal, and do not hunt at night. In fact they don’t even like to fly at night, because they can’t see as well and they run the risk of serious injury if they fly in the dark.

Red-shouldered Hawks are not considered threatened or vulnerable, but they are somewhat uncommon. Their preferred forest habitats are shrinking and that means that, while their western population is expanding, the eastern population appears to be declining, albeit slowly.

The reduction in forest habitat is often the result of expanding cities and suburbs, which means that hawks are beginning to nest in park areas more often. That, in turn, means that there’s the potential for violent encounters between nesting hawks and humans to become more common.

Snakes aren’t usually a preferred prey item, but Red-shouldered Hawks do eat snakes. Some bird watchers have observed a unique behavior in Red-shouldered Hawks, though. They’ll congregate in areas with large populations of water snakes, but not to eat the snakes. Instead, they wait until a snake has caught a fish, and then steal the fish from it. It makes for a much easier meal than they would otherwise get. 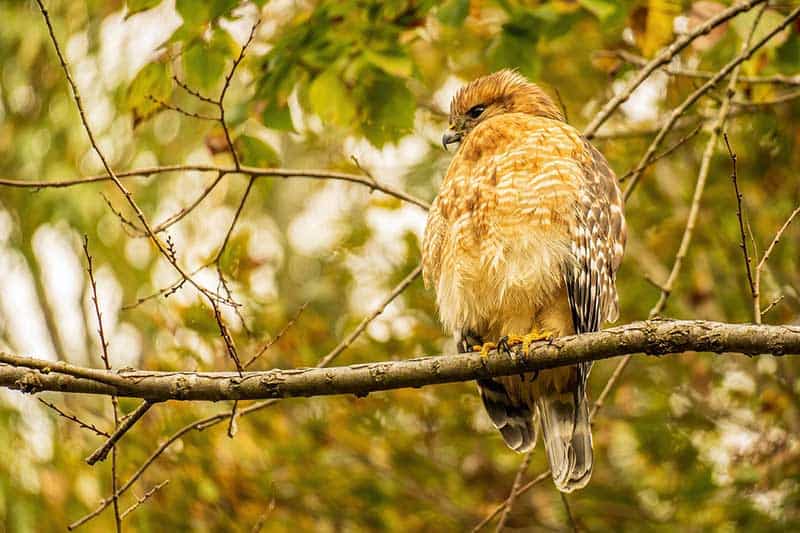 10. Will a Red-shouldered Hawk eat a chicken?

Red-shouldered Hawks are certainly capable of eating small chickens, though so are Cooper’s Hawks or Red-tailed Hawks. These hawks prefer small rodents and other, smaller prey, but they will readily attack and eat chickens when given the opportunity.

11. How many eggs do Red-shouldered Hawks lay?

Red-shouldered Hawks typically lay four eggs each breeding season. It’s unusual for all four hatchlings to survive to adulthood, however, as disease and predation take their toll.

12. Could a Red-shouldered Hawk kill a small dog?

Larger hawks like the Red-tailed Hawk have been documented killing cats and small dogs, although that’s rare. Red-shouldered Hawks could potentially be a threat to the smallest dog breeds such as chihuahuas and the various toy breeds. Attacks on pets would be very unusual, though.

If you feel the need to drive a Red-shouldered Hawk away, the best tactic is loud noises. Shouting, clapping, banging objects together, or anything else that makes loud, sudden noises will scare them off. Once they’re spooked, they aren’t likely to return quickly.

14. How do you attract Red-shouldered Hawks?