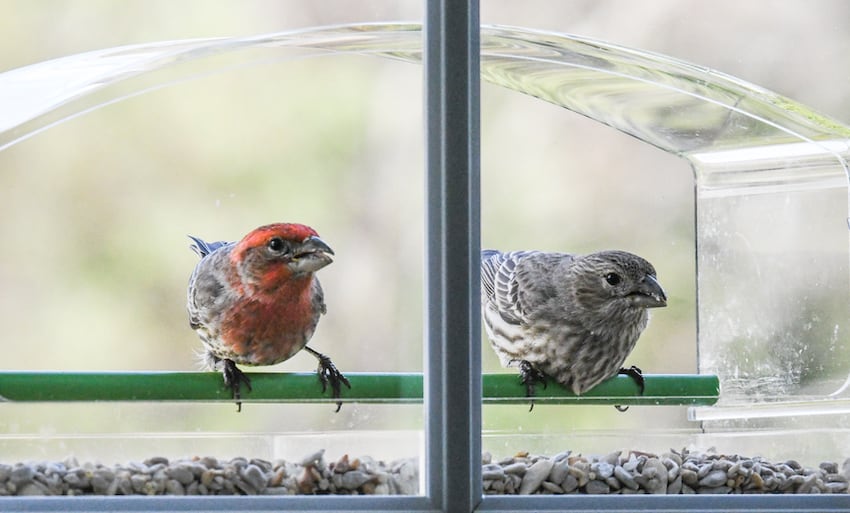 Birds, like any animal, can sometimes be afflicted with viruses, bacteria and other disease. Occasionally this can be of concern to humans, but sometimes there are diseases that just pass between the birds. One disease that has been making the rounds in the U.S. and parts of Canada since the early 1990’s is House Finch eye disease. This problem was first spotted and subsequently tracked by backyard bird watchers just like you. So let’s take a look at what House Finch eye disease is, how to spot it, and what you can do if you see affected birds.

What Is House Finch Eye Disease?

House Finch eye disease, also known as Mycoplasmal conjunctivitis, is caused by a parasitic bacterium. “Mycoplasmal” refers to the bacterium that causes the infection, Mycoplasma gallisepticum. “Conjunctivitis” is a term that means inflammation or infection of the conjunctiva, which is a thin membrane that covers the inside of the eyelid and outside of the eyeball.

In House Finches (and some other finches) eyes become swollen and infected, rendering the birds partly or mostly blind. In most cases it is not the bacterium itself that kills the birds, but this side effect that degrades their vision. They become extremely vulnerable to starvation, exposure and predators.

Where Did House Finch Eye Disease Come From?

Before being found in finches, infection by Mycoplasma galliseticum was a known issue in the poultry industry, costing millions of dollars in lost livestock every year. In chickens and turkeys it mainly causes respiratory distress like coughing, sneezing and difficulty breathing, although it does also affect their eyes.

Genetic data suggest this bacteria tried to make the jump from poultry to songbirds a few times, unsuccessfully. At some point, it is likely the bacteria adapted to persist in an unlucky House Finch. The first transmission probably occurred by passing to a few finches that were eating the feed of infected poultry.

Project FeederWatch is a citizen science program that helps the Cornell Lab of Ornithology count and track bird populations. Anyone can sign-up and report their backyard birds to Cornell through their website. The first infected House Finches were spotted by Project FeederWatch participants in the Washington D.C. area in the winter of 1994-95. Each year participants continued to give reports on the disease, and it quickly spread westward. After crossing the Rocky Mountains, cases started to grow along the west coast in the mid to late 2000’s.

Which Birds Are Affected?

As the name suggests, House Finches have been the most affected by far. However, other members of the finch family have also been seen with the disease, just in smaller numbers. The second most common group is American Goldfinches, followed by occasional reports of Purple Finches, Evening Grosbeaks and Pine Grosbeaks.

How To Spot Mycoplasmal Conjunctivitis

While finches may still suffer some respiratory distress, the most obvious symptoms occur on their eyes. Unlucky for the birds, but it does make it easier for people to notice and track, which has given scientists such good data on the spread of this disease over the years.

Affected birds will have swollen eyes that can appear red and crusty. Eyes may appear to be bulging out from the head, or almost sunken down with a raised ring around the socket, like a crater. The feathers around the eyes may appear sticky and matted, and look like they are sticking up straight from the head.

Behavior can be a clue too. You may see them sitting in one spot for long periods of time, seeming drowsy or “out of it”. Since finding food is difficult with poor eyesight, they may spend a much longer at feeders than usual, or camp out on the ground beneath a feeder. They can be seen using their foot to scratch at their head, or rubbing their face on tree branches. They may even appear to fly strangely. Hovering in one spot, bobbing up and down or not getting much height off the ground. This can be an indication they are having trouble seeing where to land.

The SIB page has a few more good photos here if you want to see some examples.

While this disease does not affect humans, it can easily spread between birds at your feeder. Research shows it is actually becoming more severe over time. The House Finches immune systems are able to put up at fight and develop some immunity, however the bacteria has kept up pace and the disease has evolved to be more severe.

The disease spreads through close contact between the birds. Unfortunately this is where bird feeders may be part of the problem and not the solution. In the wild, these finches would be less likely to have close contact with multiple other finches. But when crowds of birds pack together in one small space (your feeder), they are more likely to touch each other and the same surfaces, and transmission rates go up.

Steps To Stop The Spread

If you see a bird with House Finch Eye Disease

I know you may want to help the bird by feeding it, or get frustrated not being able to feed the other birds for 2 or more weeks, but it puts all your other finches at risk. It is better for all the birds as a whole if you can discourage the sick bird from hanging around.

Some birds do make a recovery on their own. Wildlife rehabbers are also sometimes successful in treating affected birds. If you want to go the extra mile, you can attempt to contact a local wildlife rehabilitator, tell them the situation, and see if they are willing to take the bird in for treatment. Catching the bird may prove difficult, but you can use a net or a cloth and keep the bird in a box during transport.

There are other diseases that can spread at feeders, such as salmonella and avian pox. Here are some things you can do as a responsible bird feeder to help your feathered friends stay healthy and avoid any outbreaks.

Lastly, if you enjoy having bird feeders up, consider joining Project Feeder Watch. It’s a great place to put your backyard birdwatching to use for science, and helps researchers get data about bird populations, migrations, and you can report symptoms of illness and disease.