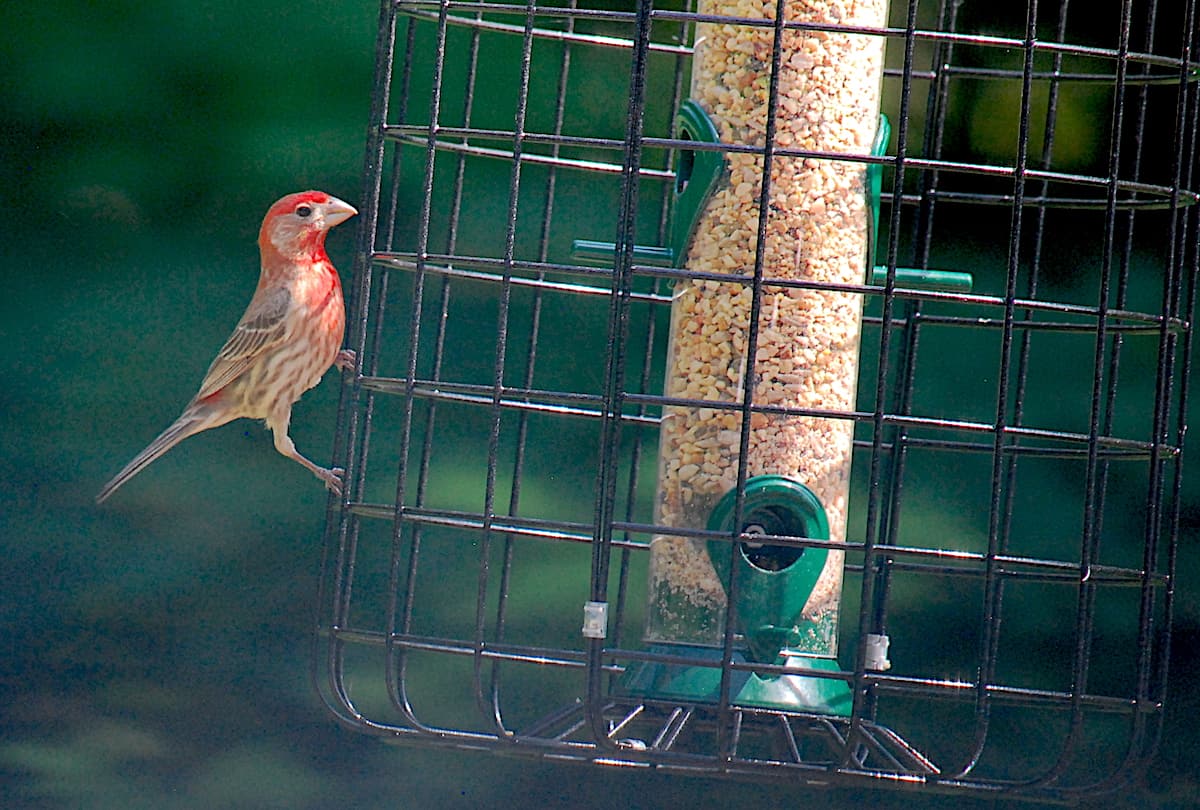 If you’re visiting this page you probably love feeding birds. You’re certainly not alone. It’s been estimated that around 40% of Americans regularly feed birds and that number might be as high as 75% in the UK. Have you ever wondered if all this human intervention could be a bad thing? Is it harmful to feed backyard birds?

Truthfully, it can be. There are some ways in which human provided food can have negative effects. But don’t take down your backyard feeder yet! There is still a lot of research that needs to be done on the effects of backyard bird feeding, but most studies show that overall the result is very positive. In the areas that have been identified to be negative, there are things you can do to help prevent bad outcomes.

Let’s look at some of these potential problems, and how we can minimize them.

Providing a backyard feeder will attract many species of birds. In the wild, these species may not have had much interaction with each other, or have congregated in large numbers frequently. Bird feeders create a real hub of activity, and this can lead to spreading of parasites, bacteria and viruses.

Daniel Becker and his team at the University of Georgia’s school of Ecology found in their research that bird feeders have contributed to outbreaks of both House Finch Eye disease and Trichomoniasis. A separate three year study in Illinois found that birds using feeders had higher incidence of conjunctivitis, pox, dermal disease or cloacal disease. Disease is perhaps one of the biggest negatives to backyard bird feeding. Interestingly enough though, that same Illinois study found that the birds who had been visiting feeders had better overall health and better immune systems to cope with the diseases. By keeping your feeders clean, you can greatly help increase the benefits and decrease the harm of feeders.

Keeping your bird feeders clean and sanitized is the best way to prevent the spread of unwanted diseases. Feeders should be soaked and scrubbed with a 10% bleach solution a few times a year. At the start of each season is an easy time to remember to do this. Or, if you only feed during certain seasons, make sure to sanitize your feeders before you put them back out.

Another problem area is mounds of unused seeds and shells that collect under feeders and can become soggy breeding grounds for bacteria and other nasties.

According to the American Bird Association, up to one billion birds are killed in collisions with glass in the U.S. each year. This includes large office buildings on their migration path so it isn’t related entirely to just backyard feeders, but they certainly play a part.

A general rule of thumb is to place your feeders either within 3 feet of a window or over 30 ft away from a window, to minimize chances of bird strike. However the experts say that using some type of window marker is really the best way to prevent this.

To start, you can try some inexpensive UV Bird Alert window decals. The closer together you place them, the more effective they will be. If window strikes are still a problem for you, you may need full window markings or shades.  For more window film and shade options check out this flyer by the ABA.

Birds that are listed as endangered, threatened or of concern are in trouble. Even if we think by feeding them we are helping, sometimes it’s actually harmful. I found out about this first hand one year visiting Florida.

While visiting Florida I wanted to see the native and endangered Florida Scrub Jay. I found a short hiking trail in the scrub habitat where they were said to be seen. When I arrived, I found a family with a bag of peanuts that they were feeding to the birds from their hands. They gave me a few peanuts and told me to try for myself. Sure enough it worked, the Jays came right over to grab the nuts.  Turns out Scrub Jays are not shy and are known for how easily they can be hand fed. So easily in fact, that after I walked further down the trail, my friend and I held out our empty hands and they came right over looking for food.

Seems harmless right?  Unfortunately, studies have shown that Scrub Jays fed by people will lay eggs earlier in the season than Scrub Jays who are not human fed. This is a problem when the young hatch earlier than the caterpillars that they depend on are available, and can lead to starvation. Also, feeding jays near roadways lures the birds closer to vehicles. Car collisions are one of the top causes of death for Florida Scrub Jays. I only learned this after my encounter with the birds, and it is in fact now illegal to fed these birds.

That’s is only one example. In general, endangered birds are walking a very fine line with their environment and introducing unnatural food sources can have dire consequences. Before offering food to birds other than your usual backyard visitors, check to see if they are a species of concern. It’s easy to check the status of a bird before attempting to feed it by going to the IUCN Red List or Audubon’s Guide to North American Birds.

It’s important to feed birds appropriate types of food. There is generally no issue with feeding various birdseeds at your backyard feeders. But some foods you have to look out for. For example, bread is often fed to ducks and pigeons but offers no nutritional value and can fill birds up without actually giving them any nutrients they need. Make sure you do a little research first if you are thinking about feeding anything other than birdseed. (check out our article on what you can feed birds from your kitchen)

In certain situations, providing food for birds may actually change their behavior, and not for the better. For example, leaving food out too close to a roadway can encourage birds to fly too close to traffic. Vehicle collisions are a big problem for some birds such as owls. 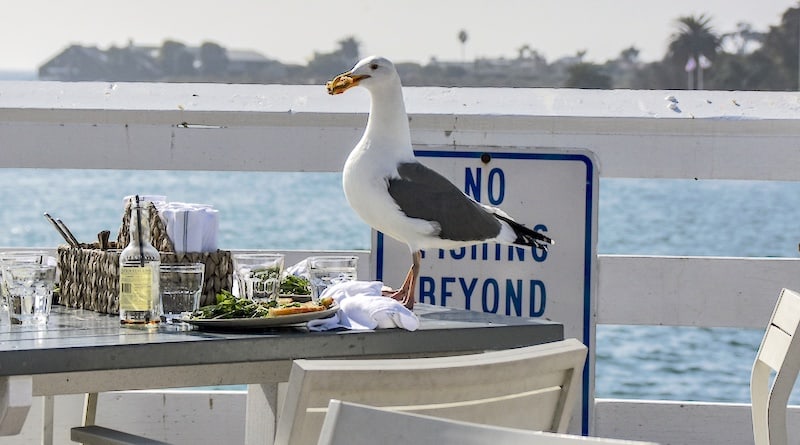 Tossing bread or french fries to the birds at beaches, outdoor cafes or waterfront restaurants and docks might be entertainment for us, but it can actually encourage birds to become too aggressive with humans by associating them with food.  If you encourage them by offering bits of your dinner, more and more birds will come looking for a meal. Large flocks of seagulls or sparrows can become a health hazard to humans, and a nuisance to businesses that might want to resort to harmful action to get rid of them. And think about it, a flock of large seagulls dive bombing you to get at your meal is a pretty scary prospect! So keep the snacks to yourself (they probably aren’t healthy for birds in the first place), the birds can find their own food just fine.

You may have noticed hawks staking out your bird feeder. Both Cooper’s Hawks and Sharp-shinned hawks have been increasing in urban areas in recent years, due largely in part to the availability of prey (your backyard birds).

This isn’t actually a bad thing though. Hawks returning to urban environments means there is enough prey to support them. When prey populations thrive, predators return, and keep the prey populations in check. Some studies have found that urban hawks are making non-native “pest” species such as European Starlings, House Sparrows and pigeons, a large part of their diet. That actually helps native songbirds by reducing their competition for food and nesting sites.

While certain types of feeding can be potentially detrimental, most studies show that backyard bird feeding has a generally positive effect on the health of feeder birds. Keep your feeders clean, offer appropriate food, and enjoy watching your backyard friends. An article I read from the Cornell Lab pointed out that in general the species of bird that most need our help are not the species that visit feeders. However the hobby of backyard bird feeding can get people interested and invested in caring for wild birds, which can lead to greater awareness of bird conservation. And that is beneficial for all birds.

“It can inspire people to engage in environmental advocacy and conservation action to help the many species that need more than sun­flower seeds.” ~Emma Greig