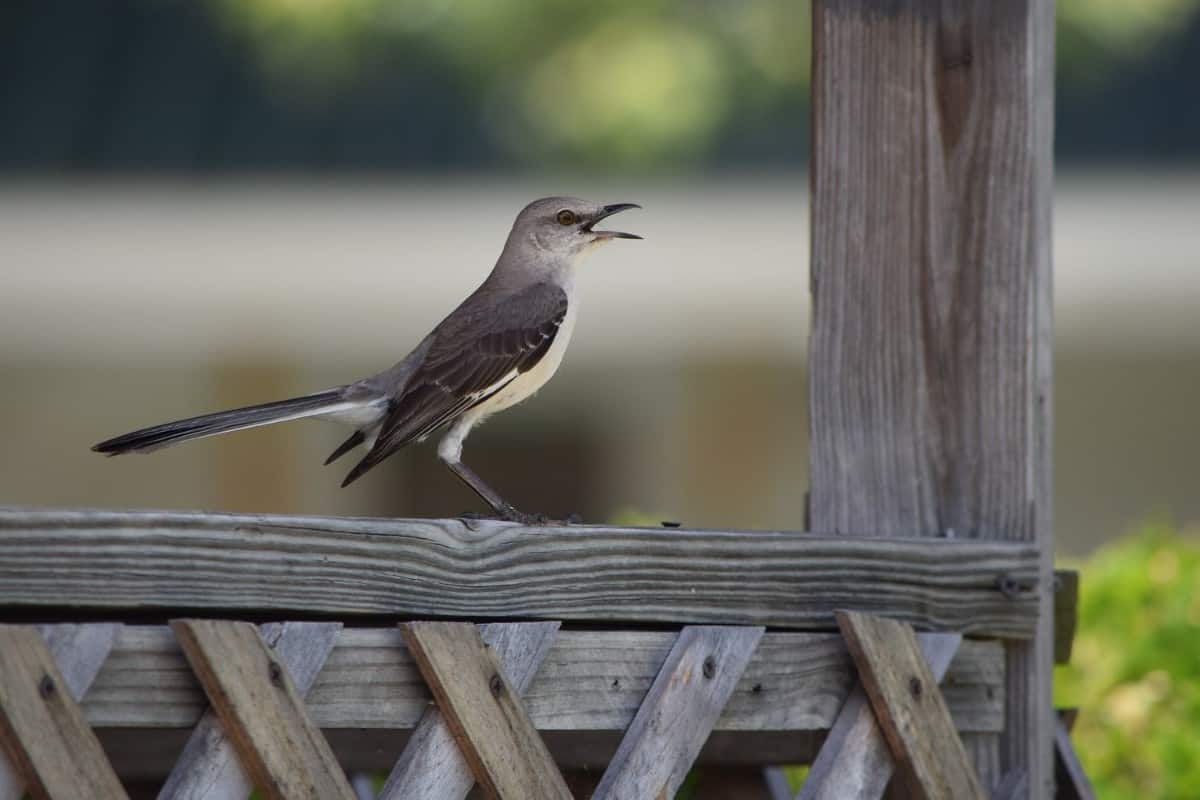 The Northern Mockingbird is a common species that lives year-round across the entire United States. In fact, they are they are the official bird of five states. However, their behavior can be a nuisance if they decide your backyard or feeder is their territory. In this article we will look at how to keep mockingbirds away from feeders, and why they display this aggressive behavior.

Don’t get us wrong, mockingbirds are pretty neat. Their name comes from their ability to mock or mimic the sounds of other birds. They love to sit on open perches and sing loudly, creating elaborate songs of repeated phrases they take from other birds. Especially during the breeding season, unmated birds may sing most of the day and into the night.

However, they are often associated with the more aggressive side of their nature, which is fierce defense of territory.

Most songbirds get territorial in the spring to stake claim to nesting areas, mates, and protect their young. Mockingbirds are no different, however their defensive attitude goes beyond most backyard birds.

When it comes to their nests, mockingbirds seem to be constantly surveying their territory, ready at a moments notice to attack any intruder, large or small. This can mean other birds, animals and even people.

Videos are plenty on the internet of cats, dogs or humans walking too close to a mockingbird nest and getting torpedoed by the angry bird. They are pretty fearless, and don’t care how big you are, they just want to keep their babies safe.

If there is a nest in your yard, really the best thing to do is just stay away from that area until the young birds have fledged.

Mockingbird behavior in the winter

Once late summer comes and nesting time is over, most songbirds loose their defensive behavior. They can share territory and food sites without squabbling. Many even hang out together in flocks during the fall and winter and look for food as a group.

Mockingbirds, however, keep their territorial behavior even when the breeding season is over. Come early fall, they begin to defend their “secondary” territory, which is centered around a food source. Typically this will be trees or shrubs that produce fall and winter fruit, like holly, pokeweed, viburnum, bayberry and juniper.

Sometimes this area will be the same they claim in the spring, but not always. While they aren’t likely to divebomb humans or animals during the winter, they will absolutely try to keep other birds away from their food.

They have been observed perching in the open, singing songs that imitate other backyard species. This may discourage birds away from the area, thinking there are already too many others of their species feeding there. They can also just vocalize aggressively to scare others away. And of course, they can go on high alert, chasing and divebombing any bird that gets too close.

Mockingbirds are typically not interested in seeds or nuts. In the summer their main focus is insects such as beetles, moths, bees, ants and grasshoppers. In the fall and winter they switch over to fruits and berries. Typical seed offered at feeders like sunflower, safflower, millet and peanut won’t attract them.

Why Do Mockingbirds Chase Other Birds Away From Feeders?

Two reasons, food and territory. As we’ve said, they don’t care about birdseed. However, they do like raisins and other dried fruits, as well as mealworms and suet. If you are offering fruits, insects or suet at your feeders, this can definitely attract them. Unfortunately, mockingbirds don’t like to share food resources and if they think your feeder is a good source of consistent food, they will claim it as their own and threaten any birds that try to eat from it.

What if a mockingbird chases away other birds, but isn’t even eating the food? This happened to me and it took me awhile to figure out. It all boils down to territory. It may turn out that your bird feeder is close to the tree or shrub where the mockingbirds have their nest.

Or, in the winter, it may be close to fruit-bearing plants that make up the bulk of their winter food. In both cases, the feeder happens to fall within the mockingbirds territory and the area that they are going to defend from other birds.

In my case, I didn’t have any food at my feeder the mockingbird wanted. However, I figured out the mockingbird was claiming that area of my yard as its winter territory. There are some fruiting shrubs and a nice big holly tree full of berries. I always see the mockingbird on that side of my house, and any bird that lands on my bird feeder is considered too close to its precious berry trees.

How to keep mockingbirds away from feeders

It’s important to figure out if the mockingbird is coming to your feeder to eat, or if your feeder is just in its territory. You should be able to figure this out after some observation. Depending on your problem, you can try some of these tips below.

As we’ve said, mockingbirds aren’t very interested in eating seeds or nuts. Does your birdseed mix have raisins or other dried fruits or insects in it? Do you have a suet feeder up?

If so, try taking all those food sources down and just offering plain sunflower or safflower seeds. It may take awhile but eventually the mockingbird should calm down once it realizes there is no suet or fruit to eat.

2) Give mockingbirds their own feeder

If the mockingbird is coming for food, setup a second feeding station filled with mockingbird goodies. Suet, grapes, raisins, cranberries and other dried fruit mixes. Place this as far away from your other bird feeders as possible.

If you can entice the mockingbird to claim this new feeder, it may start defending it and leave your other one alone. But again, distance is key. If they are too close together, it will probably try and claim both!

If you can tell that the mockingbird isn’t eating anything from your feeder, then it probably isn’t attracted to the feeder itself. Especially if you only have birdseed, which mockingbirds aren’t likely to eat.

This means the feeder just happens to be in an area the mockingbird has claimed as its territory. Watch where the mockingbird spends most of its time, and move your feeder as far away from that location as possible. If you can block the sightline, such as moving around a corner, on the other side of the house or behind a shed or group of trees, even better.

If you’re having this problem in the non-breeding season and you know it is a food source being defended, you can always remove the food. Take all your feeders down for awhile and see if the mockingbird moves on.

You could even remove the fruiting plants from your yard. This is pretty drastic and will mean other native birds, animals, and insects can’t use those plants for food or shelter either, but it’s an option if you’re really at your wits end.

Note: it is illegal to remove native bird nests. So if your problem is a spring-time nest situation, you aren’t legally allowed to remove the nest or the tree the nest is in while it is in use by the birds.

Owls and hawks eat songbirds, so most songbirds will flee if they see one. You can try putting up an owl or hawk decoy statue near where you often see the mockingbird.

To be honest, these often don’t work or work at first but once the birds get wise to the fact that it never moves, they won’t be afraid of it anymore. But it sometimes has success so may be worth a shot. Just remember, this will probably scare away other bird species too.

Mockingbirds are bold songbirds that have lovely songs, and it can be fun to watch their antics as they chase after insects or maneuver to reach berries. But, they can be quite aggressive and a real yard-nuisance if they stake a claim. To keep them away from feeders, remove all sources of food other than seed, and you may have to move the location of your feeders to avoid nest trees or winter berries.