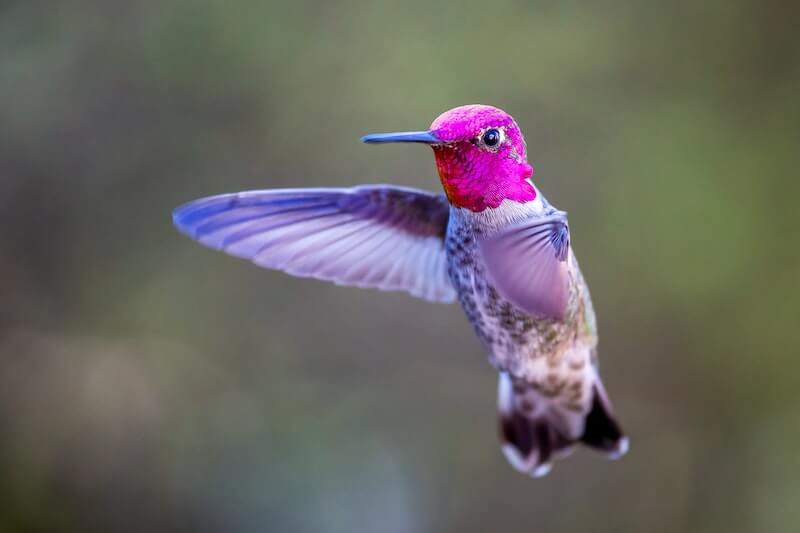 There have been reports of nearly 30 different species of hummingbirds seen in the United States. Some of these are common and can be found in the U.S. every year, while some are rare or only accidental visitors. When it comes to hummingbirds, Mississippi is a pretty great state for catching some of those more rare species. We have found 2 species that are common or semi-common and 7 that are more rare. That’s a total of 9 species of hummingbirds that have visited Mississippi.

Based on the range maps of authoritative sources like allaboutbirds.org and ebird.org, we’ve put together a list of hummingbirds most likely to be seen in the state of Mississippi. For each species in this list you’ll find the species name, pictures of what it looks like, specifications about appearance, and where and when you may be able to spot them.

Because most hummingbirds winter in Mexico and Central America, one of the best places in the U.S. to spot “accidental” hummingbirds that may have veered off course is along the Gulf of Mexico. Because of this, the southern coastal areas of Mississippi are a good location to try and spot the hummingbird species that are otherwise rare in the eastern U.S.

In fact, the majority of hummingbirds on our list would be considered very rare for central and northern parts of Mississippi. Based on eBird’s recorded sightings, Biloxi, Gulfport, Diamondhead, Bay St. Louis and Gautier are by far the best areas spot the more rare species.

Ruby-throated hummingbirds are the most common hummingbirds in the eastern half of the United States, including Mississippi. They have a green back and white underparts. Males have a ruby red throat that can look black in certain lighting.

Ruby-throated hummingbirds that have wintered further south will start to appear back in Mississippi in mid-March. They will spend the spring and summer and then be mostly gone by early November. However a small group of ruby-throats may stick around in the state all year along the Gulf coast.

In the spring they migrate north through California, spend the summer in the Pacific northwest and Canada, then zip back south through the Rockies in the fall. While the rufous is considered a hummingbird of the western U.S., they are probably the second most commonly sighted species in the east after the ruby-throated hummingbird.

Recorded sightings in Mississippi are scattered throughout the state, but the majority occur along the coast. While I wouldn’t necessarily call them common, they are seen at least a few times each year. They can pop up any time of year, however you would be much more likely to see between November and March, and not much in the summer months.

While they are a bird of the west coast, they have been spotted in most states along the east coast at least once, including Mississippi where there have been a few sightings over the years. Nearly all the recorded sightings on eBird are in the far south, although a few occurred across central portions of the state in Jackson, Vicksburg and Meridian. Regardless of the location, sightings in Mississippi tend to occur between late fall and early spring.

Calliope Hummingbirds are considered rare on the east coast, however they have been spotted in Mississippi over the years. Sightings occur more commonly in the southern part of the state, however there has been a sighting as far north as Marshall. December through February is the most likely time to see them.

Allen’s are rare for Mississippi but have been spotted there at least a few times. Like other “accidental” hummingbird visitors you’ll be most likely to see one during the winter months along the coastal area of the state.

They come up further north during the winter where they can be found along the Gulf of Mexico from Texas to the Florida panhandle. Occasionally one will stray further north and end up in the southeastern states, but it is rare. Therefore your best shot to see one in Mississippi is in the far south.

Broad-tailed hummingbirds are very uncommon in the eastern U.S., except along the Gulf Coast where they aren’t quite common but do show up somewhat regularly.

Therefore, your best chance to spot one would be along the very southern coastal area of the state. However there have also been a couple recorded sightings in the Jackson and Vicksburg area, so you never know!

While broad-billed hummingbirds are considered very rare outside of the southwestern U.S. they occasionally pop up in other states. I only saw one sighting recorded for Mississippi, right outside of Biloxi.

However, I decided to leave them on this list because sightings occur along the coast to the west in New Orleans, Baton Rouge and Covington Louisiana, and to the east in Mobile, Daphne and Fairhope, Alabama. With that close of proximity, they must cross the border into Mississippi from time to time down near the Gulf.

Anna’s actually stay in the U.S. all year within most of their range, however you’ll only find them regularly in a few of the western states, such as California and Washington.

The green of their feathers tends to be a bit brighter and more iridescent than most others, and even their chest and belly are sprinkled with emerald feathers. Males have rosy-pink throats and those colorful feathers extend up onto their forehead.

Anna’s are very uncommon on the east coast, but they do stray from time to time. There have been a few sightings in Mississippi over the years. Most occur along the southern coast, however there are also sightings in the middle of the state. As with most rare hummingbirds, the best time to spot Anna’s would be during the winter.