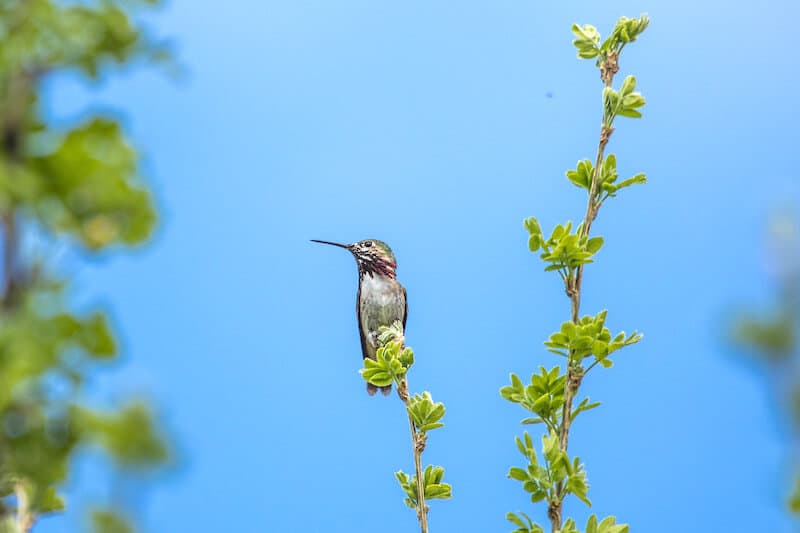 Based on the range maps of authoritative sources like allaboutbirds.org and ebird.org, we’ve put together a list of hummingbirds that can be seen in the state of Wyoming. The 4 species you’d be most likely to see in Wyoming are the black-chinned hummingbird, calliope hummingbird, rufous hummingbird and broad-tailed hummingbird. For each species in this list you’ll find the species name, pictures and specifications about appearance, and where and when you may be able to spot them. We will list the more common species first, and the less common one last.

For most hummingbird species in the state, the areas of higher elevation and forests are much more likely for sightings than areas in the middle of the state. Areas around Yellowstone, Bridger-Teton National Forest, Bighorn National Forest and Medicine Bow-Routt National Forest would all be great areas to try and spot most of Wyoming’s diverse hummingbirds.

Males throat color looks plain black in most light, however they do have a small strip of purple feathers along the bottom that is sometimes visible. Females appear like most hummingbird females, green above and pale below with a plain throat.

Black-chinned hummingbirds aren’t extremely populous in Wyoming, but they aren’t super rare either. While there have been sightings at various locations throughout the state, it is most common to see them along the southern and western border. Most of the recorded sightings I saw happened between June and August.

The calliope hummingbird mainly spends its breeding season in the Pacific Northwest and parts of western Canada, but can be seen in many western states during the spring and fall migration. This is an impressively far migration, especially considering the calliope is the smallest bird in the United States!

Calliope Hummingbirds are most common in the mountain habitats of western Wyoming, but are also spotted along the southern border in the Medicine Bow-Routt National Forest and in the north around Bighorn. Sightings will start to occur in May and run through the end of the summer.

In the spring they migrate up through California to get to their summer breeding grounds. This species breeds the furthest north of any North American hummingbird species, all the way up in southern Alaska. Their summer breeding grounds are in Oregon, Washington, western Canada, the upper two-thirds of Idaho and western Montana. Instead of traveling back south through California, they tend to head south following the path of the Rocky Mountains in the fall.

A small population of rufous will breed in northwestern Wyoming, and they will start to pop up in May. Sightings will increase throughout the state in July and August as the birds that spent their summers further north begin to migrate south again. Most will have left / passed through the state by September.

Males have a rosey-magenta colored throat. Females have some green spotting on their throat and cheeks, and buffy colored sides. They get their name from their tail feathers, which are broader than most other hummingbirds. However you’ll only notice that with very close observation and if you are used to what other hummer tails look like!

Broad-tailed hummingbirds are short term visitors in the U.S. so look for them in Wyoming between May and August in meadows and forest clearings. They are are most common in the western part of the state but are spotted all over, especially in the larger national forests.

Anna’s actually stay in the U.S. all year within most of their range, unlike most hummingbirds that winter south of the border. However you’ll only find them regularly in a few of the western states, such as Oregon, California and Washington.

The green of their feathers tends to be a bit brighter and more iridescent than most other hummers in the U.S., and even their chest and belly are sprinkled with emerald feathers. Males have rosy-pink throats and those colorful feathers extend up onto their forehead. They are happy in backyards and love gardens and eucalyptus trees.

Anna’s are considered quite rare in Wyoming, but the have been spotted a couple of times over the years. So while not common, there is possibility of spotting a stray Anna’s in Wyoming during the late summer or fall, especially in the far west.

Ruby-throated hummingbirds are extremely common in the eastern half of the United States, but not in the west. In the western states they occasionally show up as accidental visitors. Both sexes have a green back and white underparts. Males have a ruby red throat that can look black in certain lighting. Each spring they enter the country in droves from their wintering grounds in Central America. Many of those bound for the eastern states cross the Gulf of Mexico in a single flight.

Wyoming falls well outside of the ruby-throated hummingbirds range, so they are rare, accidental visitors to the state. Ebird.org only has three recorded sightings over the years, and all occurred in the eastern half of the state.