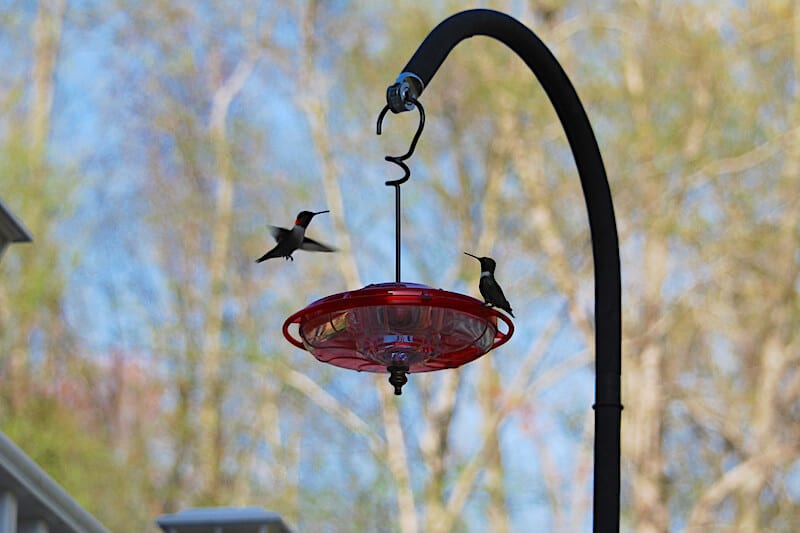 Hummingbirds are delicate-looking birds, small and fast, that feed on the nectar of flowers. They are a desirable addition to backyards all over the world, and it is extremely common for people to put out feeders to try to attract them to their yards. While observing these fascinating creatures, you may notice them chasing each other around and trying to keep others from using a feeder they like to drink at. Why are hummingbirds so territorial?

Why are hummingbirds so territorial?

Mainly for the same reason most animals are territorial, access to a food source and breeding location. According to birding experts Kimberly and Kenn Kaufman, “hummingbirds can be feisty when defending their food source.”

The breeding season is when you will see the most aggressive behavior. This tends to be early spring to early summer. At this time hummingbirds are returning from their wintering grounds, and it’s a race to find good food sources, places to nest, and mates.

Which hummingbird species is the most territorial?

While any species of hummingbird can show aggression and territorial tendencies, there are some species that are known to be more aggressive than others. The one with the “worst” reputation is the Rufous Hummingbird (Selasphorus rufus).

According to All About Birds, this troublemaker can make the lives of the other hummingbirds visiting your yard more difficult. That is because this feisty bird has shown aggression at all ages and in both sexes. They are known to aggressively chase other birds away from feeders, and will even chase chipmunks and larger hummingbirds away from their nest and feeders. The Rufous hummingbird is found throughout California, as well as in the Rocky Mountains, Alaska, and the Pacific Northwest.

Are both male and female hummingbirds territorial?

Yes, both male and female hummingbirds can be territorial, though it is usually for different reasons.

Males are more likely to become territorial over what they have claimed as “their turf”. While territory size likely differs from species to species, an estimate for the ruby-throated hummingbird is about a quarter acre. Males will chase other males out of their area in an attempt to control not only the food sources, but the right to mate with the females nesting within that territory.

This type of aggression tends to calm down for the males in the summer, after the females lay their last brood of the season. However defending a food source, such as a nectar feeder, can continue or increase even during the fall as they attempt to put on as much body fat as possible for their migration south.

Female hummingbirds are most aggressive during the breeding season. This aggression is typically seen in late spring or during the early weeks of summer because this is their time to nest. Defending their eggs and hatchlings is an important task that they take seriously, and they will attempt to chase away anything that gets too close to the nest. They also defend food sources against other hummingbirds.

Why do hummingbirds chase each other?

One of the reasons as we mentioned above is to defend their food source, nest, or territory. However chasing doesn’t only happen out of aggression or during territory disputes.

Hummingbirds also chase as an act of courtship. It is common to see this playful chasing when one hummingbird is courting another. The male using many tactics to get the attention of potential female mates. If you’re luck you can catch this courtship ritual in the spring.

Along with some friendly chasing, males will perform dives while the female looks watches in an attempt to impress and entice her. I was lucky enough to see this once, when a male ruby-throated hummingbird was flying back and forth in a tight U-shape while an interested female looked on.

How can I get rid of bully hummingbirds?

If you have a nectar feeder you have likely witnessed one hummingbird trying to chase away any others that come near. While you can’t completely stop this behavior, there are some things you can do to help.

Get a second feeder and space it out

It’s hard to be in two places at once. Getting a second feeder and putting them far apart in your yard can help give other hummingbirds a chance for some food. It’s even better if there is no line of sight between them. I like to have one in my front yard close to the house, and another in the backyard. You could also have one on either side of your house, or both in the backyard that is large that may have some trees to separate them.

In some cases, putting multiple feeders together in the same location will help since one hummingbird can’t defend them all simultaneously. This may work best in areas with high hummingbird traffic. Where I live I rarely get more than three at a time, however in some places like Texas or California you could have 50 at once! If you have a lot of hummingbirds then increasing your feeders can give them a sense of plenty, and with too many to defend they may put less energy into trying.

Thankfully hummingbird feeders are inexpensive, and if you make your own nectar (which is also inexpensive) then once batch can fill multiple feeders.

If you don’t want to manage more feeders, adding flowers to the yard and bring additional food sources. Especially if you put some flowers on the opposite side of the house where your feeder is, it can another hummer a chance to feed while the “bully” is busy at the feeder.

Are hummingbirds aggressive to humans?

Hummingbirds can sometimes be aggressive towards humans, however it is unlikely they would ever try and attack you. Typically they will just buzz around your head very close, trying to intimidate you and scare you off. This is most likely to happen if you get too close to a nest and mom hummingbird comes out to try chase you off.

If the hummingbirds are used to getting food from the feeders, then they may grow impatient waiting for you to fill them up. In this instance, they have been known to fly up to your face while you’re trying to change or refill the feeders, chirping for food.

Hummingbirds are also curious creatures, and sometimes they may fly up close to you just to get a better look at you. In any case, you don’t need to fear them, and most of the time they are the ones startled and will fly away from you if you get too close.

How can I attract hummingbirds to my yard?

Instead, simply dissolve 1/4 cup of plain white sugar into 1 cup of water, and then fill the feeders with the mixture. This simple sugar syrup is adored by hummingbirds, cost effective, easy to make, and is safe.

Flowers with brightly-colored, tubular-shaped blooms are ideal for hummingbirds. These types of plants typically hold nectar better and are easy for the hummingbirds to feed from. It’s best to plant flowers that are native to your area, so make sure to check which of the plants on the list above are native to your specific area.

The answer to why are hummingbirds so territorial is generally due to defending their food source. However, aggression can also occur during the breeding season, when the males are fighting for mates, or when females are defending their nests. While you cannot stop all types of territorial aggression, you can help reduce bullying due to food source by doubling up on feeders and trying different placements.