Is red dye harmful to hummingbirds? Dyes in food for human consumption have been controversial since the early 1900s. In the birding community, this has also been a hot topic for many years. While there are some strong opinions on either side, the short answer is, there is not enough definitive proof to say for sure one way or the other that red dye is harmful to hummingbirds. There have not been any scientific studies done directly on hummingbirds to investigate this. However, studies done on mice and rats have given evidence that at certain doses, red dye has harmful health effects.

Using red dye in nectar itself is really unnecessary these days, and I think the Audubon put it best when they said

“There’s no need for red dye here. Red coloring is not necessary and the chemicals could prove to be harmful to the birds.” 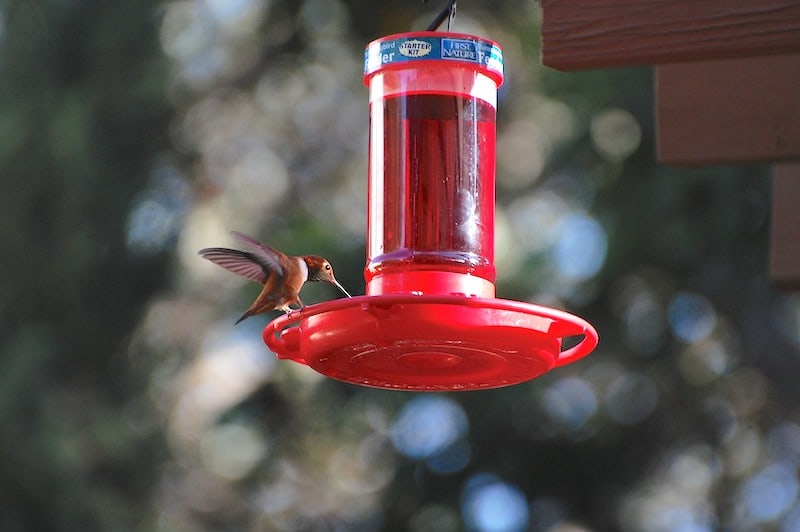 Why do some people add red dye to nectar?

So why is the red dye even there in the first place? Early bird watchers noticed that hummingbirds are very attracted to the color red. It is thought that hummingbirds use bright reds as one indicator in finding nectar producing flowers in the wild. So the idea was that by making the nectar red, it would stand out and attract hummingbirds to backyard feeders.

This made sense a long time ago when nectar feeders were mostly made from clear glass tubes and bottles. However today, most manufacturers of hummingbird feeders take advantage of this knowledge and feature the color red prominently on their feeders. The vast majority have red plastic/glass tops or bases. That is all that is needed to attract the hummers. Having the nectar also be red really ads no additional attractive value if your feeder already has the color red on it. Also, in nature, nectar is colorless.

The food and drug administration (FDA) banned Red Dye #2 in 1976 after studies showed links to cancer in rats. In 1990 Red Dye #3 was restricted, although not banned, for similar reasons. Since the 1980’s the red dye most commonly used in the United States is Red Dye #40, an azo dye made from coal tar. I looked up the most popular brands on Amazon that are selling red colored nectar and most listed Red Dye #40 as an ingredient.

Red Dye #40 goes by many names, most commonly Allura Red or FD&C Red 40. You’ll find it everywhere from candy to fruit drinks. Even today, it is still highly debated whether it causes negative health effects. Studies are currently being done to try and gauge potential affects of hyperactivity and behavioral issues in children. Nothing has yet been proven. The European Union and the FDA approve Red 40 as a food colorant, however several individual countries have banned it. 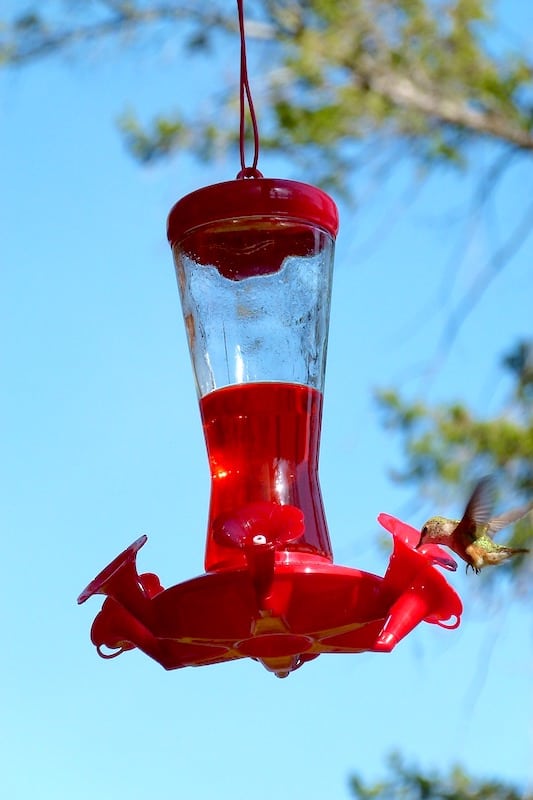 Rumors have been going around for years that this dye causes skin, beak and liver tumors in hummingbirds, along with impaired egg hatching. However these claims are mostly anecdotal, passed around by individuals within the wildlife rehabilitation community.  No scientific studies have been done directly on hummingbirds.

Red dye 40 has been through some animal testing, specifically on mice and rats. In the early 2000’s Japanese researchers reported that Red 40 induced DNA damage in the colons of mice, which is a precursor to the formation of cancer cells. Another American study done in the early 80’s found high doses of Red 40 given to rats decreased reproduction rates and survival.

Which brings up another issue, the dose. If you know anything about toxicity, you’ll know that almost anything is toxic in a high enough dose. Red dye 40 may be approved by the FDA, but they do have prescribed daily limits and would not recommend you consistently consuming high concentrations of it.

The amount of nectar they consume makes dose a big problem

If you are filling your hummingbird feeder with red-dyed nectar all season, they will be consuming it multiple times a day for months on end. In other words, they would be getting a very high dose. Some hummingbird specialists have tried to approximate how much red dye a hummingbird would be ingesting if it was regularly visiting a feeder providing red-dyed nectar. They concluded that a hummingbird would be ingesting the dye in concentrations at about 15-17 times higher than the recommended daily intake of humans.

This would also equal out to about 10-12 times higher than the concentration that was found in the above mentioned study to cause DNA damage in mice. And this hummingbird would probably be feeding heavily from the same feeder, all summer long.

It is true that the metabolism and metabolic processes are quite different in a hummingbird compared to a mouse, so we can’t draw any definitive conclusions on how this will affect hummingbirds.  However as is often the case when trying to determine the toxicity of substances to humans, we rely on the results of animal testing and cell cultures to indicate the potential for a substance to be a health threat without testing it on humans directly.

Many would argue the same should be applied to hummingbirds and that these negative health effects on mice and rats are a strong indicator Red 40 should not be consumed by hummingbirds. Most especially because hummingbirds consume nectar as more than half of their diet, any harmful effects that do occur are sure to be compounded by the large amount they are consuming.

No. In nature, the main things that make up the nectar from flowers are water and sugar. Perhaps some trace minerals specific to each flower, but that’s it. There is no reason to believe that dyes, vitamins, preservatives or other ingredients found in store bought nectar are beneficial. In fact it is more likely that they are neutral or at worst, unhealthy for the hummers. Plus, homemade nectar is fresh with no preservatives. If you prefer to buy pre-made nectar instead of making your own that is ok, but don’t assume that store bought is going to be better. Homemade nectar is easy and super inexpensive to make.

Should I add food coloring to my homemade nectar?

Again, no, it is unnecessary. In fact, you don’t even need to use more expensive “organic” sugar. Have you ever noticed how some organic sugars have an off-white color? That comes from residual iron, which is filtered out of plain white sugar. Hummingbirds are sensitive to too much iron, and over time it can build up in their system and cause toxicity. So lucky for you, a big ‘ol bag of inexpensive plain white sugar is best. See our super easy recipe here.

How to attract hummingbirds without dye

There are two simple things you can do to attract hummingbirds to your yard without using red nectar. Use a red feeder and plant hummingbird attracting flowers.

These plants have brightly colored nectar producing flowers that hummingbirds enjoy. Plant them near your feeder or just anywhere in your yard you’d like to view some hummers.

Red dye 40 has not been specifically tested for health effects on hummingbirds. It’s potential health effects on humans are still not definitive either. So while there isn’t solid proof that it is harmful to the hummers, many people choose not to take the chance and just avoid it. It’s easy to purchase nectar without dye, and it’s even cheaper to make it at home yourself. I think this quote from Sheri Williamson, author of A Field Guide to Hummingbirds of North America says it best,

[blockquote align=”none” author=”Sheri Williamson”]The bottom line is that ‘instant nectar’ products containing artificial coloring are at best a waste of your hard-earned money and at worst a source of disease, suffering, and premature death in hummingbirds[/blockquote]

So why risk it?