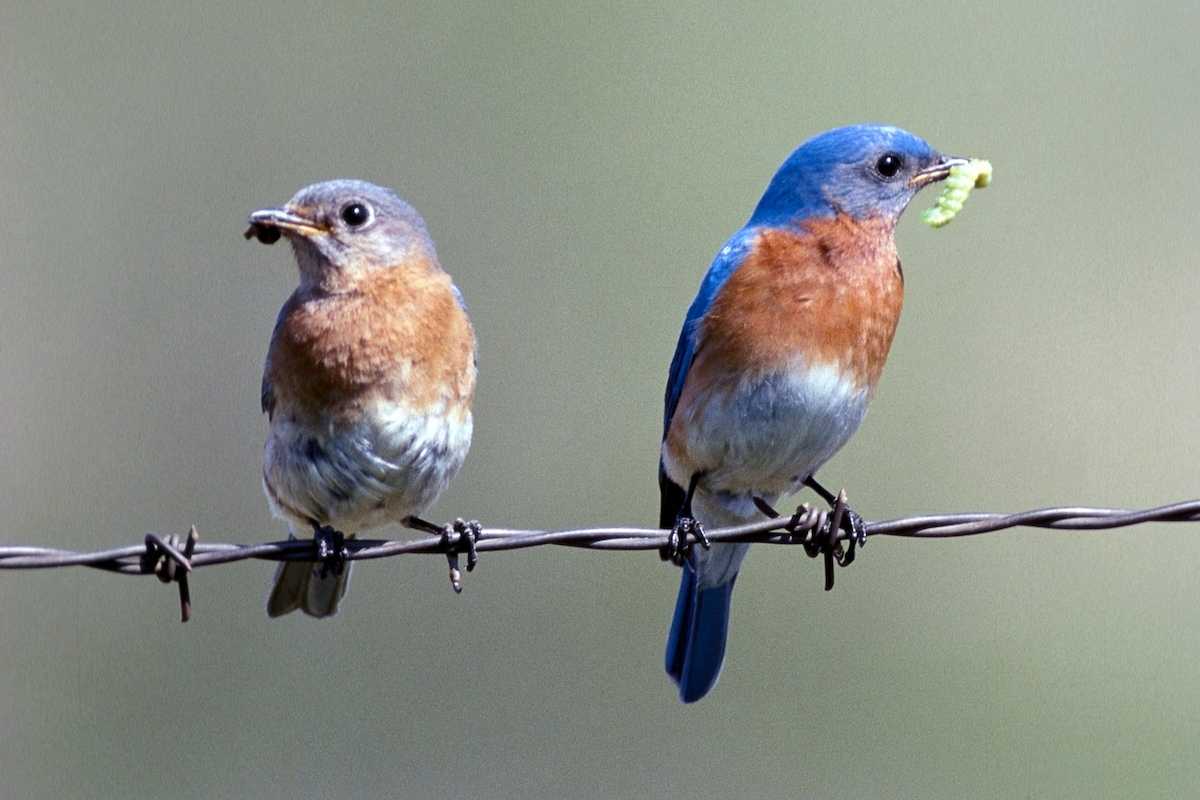 Bluebirds are some of the most beautiful and treasured songbirds in all of North America. These sweet mid-sized birds have become symbols of springtime, cheer, and happiness. In this article we will look at male vs female bluebirds and find out what differences they have from each other.

3 Differences Between Male vs Female Bluebirds

There are three species of bluebird found in the United States, the eastern bluebird, the western bluebird, and the mountain bluebird. In this article we are going to lump them all together to talk about bluebirds in general, but we will point out their individual color variations.

From behavior to appearance, let’s look at the top 3 differences between male vs female bluebirds.

While the shape and color pattern remain mostly the same between males and females, the colors of the male are much brighter, darker and more vibrant across all three bluebird species.

Male eastern bluebirds have a blue head, back, wings and tail. Their chest and sides are rusty orange, and their belly is white. Females head and back appears a grayish brown with hints of blue, with more blue visible on their wings and tails. They have the same rusty chest and white belly as males, but it may be paler in color.

Male western bluebirds have a deep blue head, wings, rump and tail. Similar to the eastern bluebird they also have a rusty orange chest and sides, however this extends over their “shoulders” and onto the upper back. Instead of a white belly, they can sport pale blue or light gray.

Female share the same coloration as the males only not as bright. Some females will show blue on the head and back, while others are mostly gray in those spots with the blue showing up on their wings and tail only.

Male mountain bluebirds tend to be a brighter, more powdery or neon shade of blue than their eastern and western counterparts. Their chest is a lighter blue than their body, with a white or pale gray belly. Females are mostly a pale gray with hints of blue on their wings and tail. Their chest and belly coloring can be pale gray or have a rusty tint.

2. Males tend to be more territorial than females

In general, males are more likely to get into territory disputes and fights than females. This can include chasing each other, hovering close together and displaying, or even making contact and striking with their feet or wings. This is typically most pronounced during breeding season. Some males have even been observed being aggressive with females during courtship.  Both sexes have been observed attacking their own image in a mirror, believing it to be an intruder.

For all species, it’s the female the takes care of nest building. Bluebirds are cavity nesters, and will use holes in trees or nest boxes provided by humans. Males may occasionally help by brining materials, or just observe from close by, but the female does the majority of material collection and construction. The cup is made from grasses, pine needles and other plant fibers. She will find soft materials to line the cup, like feathers or animal hair.

Females also take care of incubating the eggs. Once hatched, males and females together will share duties of feeding the babies.

With three species across the U.S., chances are good that bluebirds live near you. Two of the best things you can do to try and attract them to your yard are putting out food and providing housing.

Bluebirds eat insects during the spring and summer, then add in berries during fall and winter when insects can be harder to find. They aren’t particularly interested in nuts or seeds, so your typical birdseed won’t do much to attract them. Mealworms, live or dried, are one of the best things to offer for bluebirds. Check out our article looking at some of the best bluebird feeders.

Habitat loss has been tough for bluebirds, losing the forested areas and dead trees they need for their nest cavities. Putting up a bluebird house can really help them out. To give yourself the best chance of attracting a bluebird, make sure your box meets the specifications that bluebirds like the most, including the size of the entrance hole. You can find specs for specific species on the Cornell NestWatch page.