Owls are known as indicator species, meaning they depend on the most sensitive aspects of an ecosystem to survive. Their presence is used to measure the health of an ecosystem. If plenty of owls are around, it’s generally a good sign that the local environment is balanced.

Let’s take a look at quick look at each of the 7 species of owls in Georgia.

The 7 Species of Owls in Georgia

Eastern Screech-Owls are known for their effective camouflage. Even though they’re year-round owls in Georgia, you’ll have to have sharp eyesight to find them. Their grey and red-brown patterned feathers give them excellent camouflage for blending into trees.

They nestle in empty tree cavities in most kinds of woods and forests, often near water sources. They’re one of the many birds that benefit from the cavities and excavations made by woodpeckers. A good way of locating them is to listen for their trills at night, which sound somewhat similar to a horse’s whinny.

Paying attention to smaller birds may also help you locate one of these owls. If you hear a lot of noise and alarm calls coming from birds like blue jays and other members of the crow family, they could be in the process of mobbing an Eastern screech owl.

Great horned owls are easily recognizable among other birds of prey.  Their signature deep hoot, feathered tufts on their heads, and large, yellow eyes are characteristics that have earned them a spot in countless stories and works of art.

They’re found year round in Georgia and also throughout North America. They occupy a large range of habitats including deciduous and evergreen forests, new forests with clearings and open areas, and even swamps.

Find Barn owls year round in Georgia,  as well as across the entire country. During the day they hide in dark, quiet places like abandoned barns or other man-made structures.

Find Barred Owls year-round in Georgia in large evergreen and deciduous forests. They’re fairly large owls with mottled brown and white plumage, and dark eyes. Their soft brown coloration blends right into the trees they roost in during the day.

Only non-breeding populations of Short-eared owls found in Georgia. Dawn and dusk is the best time to look for them. Unlike most owls, they can also frequently be seen in the daylight. Keep on the lookout for  their pale faces with yellow eyes outlined in black. 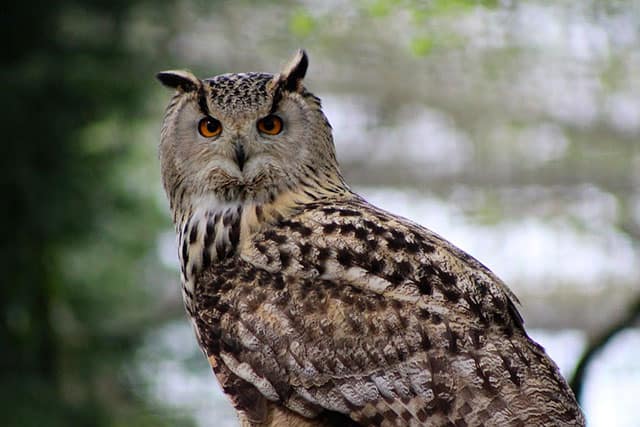 Scare populations of non-breeding Long-eared Owl are found in the majority of Georgia. However, there are some southeastern areas of the state where these owls aren’t found at all. They’re pretty hard to spot due to their secretive nature and excellent camouflage.

During the day they lay low in dense forests, coming out to open areas at night to hunt. They’re very agile when it comes to flying and hunting — using their super-sensitive hearing to catch prey in the darkest of conditions.

As if these tiny, elusive birds weren’t already hard to see — only scare, non-breeding populations of Northern saw-whet owls are found in Georgia.