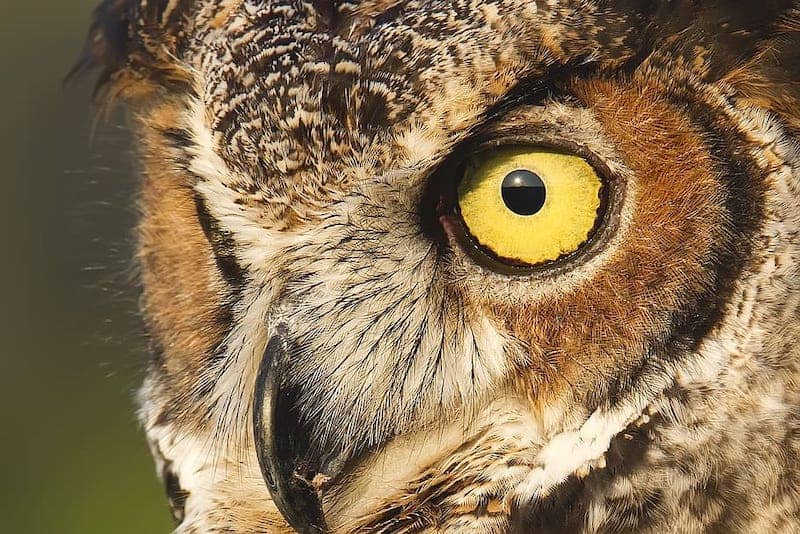 There are 9 species of owls in Iowa, and no matter what part of the state you live in you’re likely to have some owls living nearby. You may not realize it, though, because owls are hard to spot. Most of them are only active at night, and they’re superbly camouflaged.

Even at night, they fly silently and make very little noise. Once you know what to listen and look for, you’ll be surprised at how many owls live close to you.

Owls live in all kinds of habitats, with different species preferring different environments and some species avoiding others. Below you’ll find a list of the owls that live in Iowa, and where and when you can find them.

The 9 Amazing Owls in Iowa

Barn Owls can be found throughout Iowa, though they prefer open spaces like grasslands and agricultural fields. Even this far north they don’t migrate, so you’ll find them in Iowa year-round.

The Barn Owl doesn’t hoot like most owls; instead, it makes an eerie screeching noise. The sound is actually quite scary if you aren’t prepared for it and, along with their ghostly pale faces, is the reason they’re often known as Ghost Owls or Demon Owls.

The owls live in Iowa all year, and can be found throughout the state. You’ll have more luck finding them in wooded areas than grassland, as they prefer to roost and hunt among the trees.

Screech-owls hunt birds, and one of the most reliable methods of locating a screech-owl during the day is to listen to the songbirds. Smaller birds will often mob the owls in the daylight to drive them away, and the commotion can be heard from a long way off. These owls are so well camouflaged, you’ll have a hard time finding one otherwise.

The Northern Hawk Owl can be found in Iowa, but it’s somewhat rare. The northern edge of the state is the very southern edge of the owl’s range, and even then they generally don’t venture this far south unless prey is scarce, especially after a good breeding season.

Northern Hawk Owl’s are a bit unusual because they aren’t nocturnal. They hunt primarily during the day, which means that they identify prey by sight and their hearing isn’t as acute as other owl species’. It also makes them a bit easier to spot than other owls.

Burrowing Owls can be found in northwestern Iowa during the breeding season, which typically begins in late March or April and lasts through the summer. As their name suggests, burrowing owls like nest in underground burrows. While they can dig their own, they often use old prairie dog tunnels.

Burrowing owls have long legs adapted for walking, and they prefer to hunt on the ground rather than from the air. Like Northern Hawk Owls, they hunt during the day. During the summer months, if you head to the open areas in northwest Iowa there’s a good chance you’ll spot these small, long-legged birds running around the fields, hunting small prey.

Barred owls can be found in most of Iowa, although they’re largely absent in the northwest of the state. They aren’t migratory, so you can find barred owls in Iowa all year long. They especially like wooded areas near rivers and streams.

Barred owls can be identified at night by their distinctive call, which sounds a bit like the phrase “who cooks for you?” Once you’ve located one, you’ll be able to find it again and again- barred owls inhabit the same territory for life. One study found that, once adult owls settled in a territory, they rarely traveled more than six miles away from their preferred roosts.

The long-eared owl breeds in the north, and migrates south. You’ll be able to find these owls in Iowa during the fall and winter months, and then they’ll leave in the spring. They tend to roost in large numbers during the winter, and often like to roost in pine stands or groves of trees along the edge of grasslands.

Long-eared owls are well camouflaged, and they’re habit of roosting in dense foliage makes them hard to spot, even in large groups. Often they can only be found by locating the pellets they leave below their roost trees.

You can find short-eared owls in Iowa all year long, all throughout the state. They prefer open spaces, and can often be spotted at dawn or dusk flying low over the grasslands.

The “ears” which give the owl it’s name are so short you’ll never spot them, but they have distinctive yellow eyes that make them easy to identify. These owls have been found all over the world, and can fly long distances over the open ocean. They’ve even been reported landing on ships far out at sea.

These minuscule owls can be found in Iowa during the winter, although there is a small portion of the state in the northeast where they’ll live year-round. They’re partial to forests and tend to roost in dense stands of conifer trees.

While most owls swallow they’re prey whole, the northern saw-whet owl tears its food (mainly mice) into pieces, and often eat one mouse over several meals.

Their size and fierceness lets Great Horned owls go after almost any prey from rodents and frogs to falcons and other raptors. Their talons can exert 28 pounds of force to break the spine of their prey. Found year round throughout the state of Iowa, these owls will also use a backyard owl box.