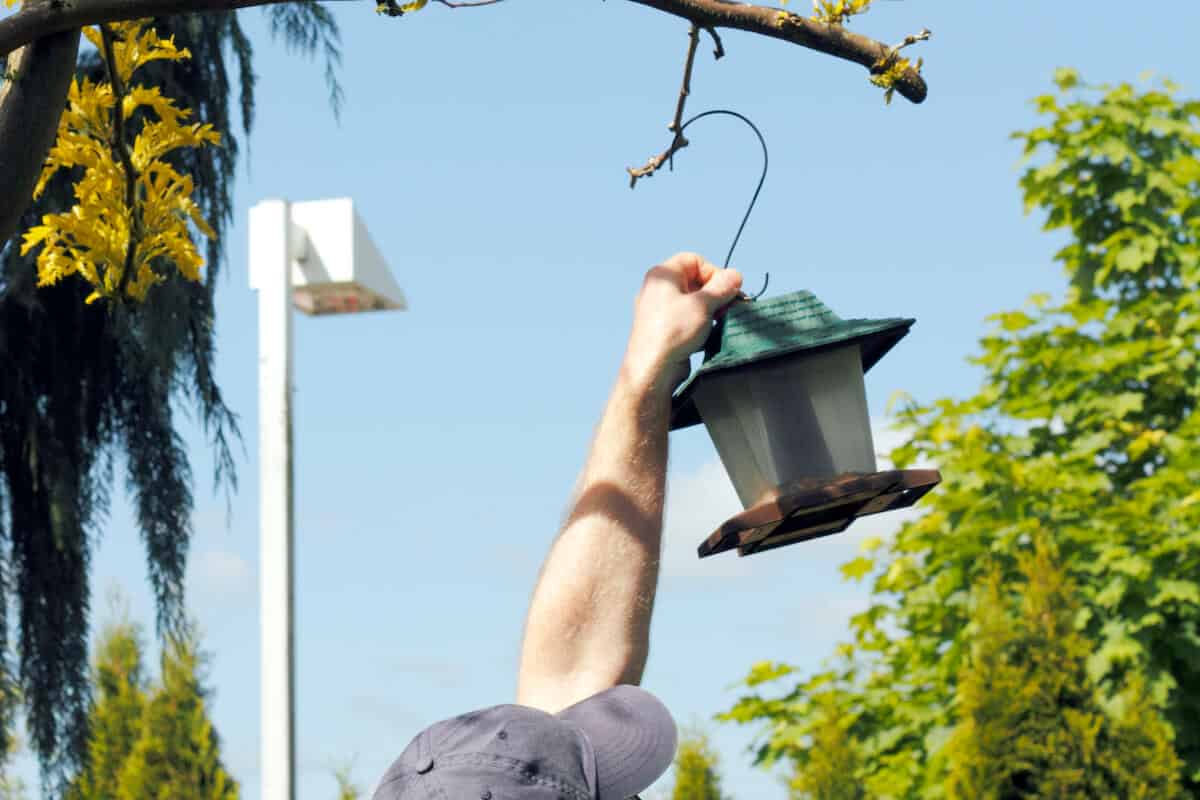 You may have come to this article because avian flu is currently in the news, as of the spring and summer of 2022. Bird flu is nothing new, but we haven’t had a large scale outbreak in the U.S. since 2014-2015. The biggest concern for most bird lovers is, should I take down feeders because of the avian flu?

It can be hard to know what to do when you see so much conflicting information and advice. We hope to educate you a bit on what bird flu is, which birds are infected and what you can do.

What is the avian flu?

Avian influenza, often called avian flu or bird flu, is a disease that affects birds due to influenza A viruses. These viruses can come in different strains. For example, you will often hear of viruses referred to as a combination of letters and numbers, such as H5N1.

Influenza A viruses are also classified by how “pathogenic” they are.

Which birds are affected by avian flu?

Not all birds are affected by avian flu equally. The virus spreads naturally among aquatic birds such as ducks, gulls, tern, geese, sandpipers and herons.

These wild birds can then infect domestic poultry like chicken and turkeys. Raptors such as eagles, hawks and owls can also be infected by ingesting the virus from eating infected birds.

According to Audubon, a mild version of the avian flu (LPAI) is often present in wild birds that show no symptoms. However when exposed to domestic poultry, it can mutate into the more aggressive strain (HPAI) which can then transmit back into the wild bird population.

The virus spreads through close contact bird to bird, and also when birds come into contact with infected surfaces. The virus is present both in saliva and feces.

Should I take down my feeders?

It is usually not necessary to take down bird feeders during an avian flu outbreak, unless you keep domestic poultry or waterfowl on your property.

Poultry is very vulnerable to catching the more severe forms of the virus. So while your backyard birds may not transmit it to each other, or only carry mild strains with no symptoms, they could readily infect poultry or ducks you keep in your yard.

Historically, bird flu hasn’t posed a significant risk to songbirds. However according to Audubon, some infections have been found in the U.S. and Canada in corvid species such as crows, ravens, magpies and blue jays.

It is theorized that perhaps corvids, who often scavenge, may be picking up the virus from consuming infected carcasses. This could point to a more widespread outbreak than we’ve seen in the past, potentially affecting more species.

It will take a lot more data to determine if current strains of the avian flu are significantly impacting songbirds or hummingbirds in ways that they did not in the past. Currently, poultry, waterfowl and raptors remain the most at risk.

What some experts are saying

As always, it’s best to consult trusted organizations and state agencies when deciding what actions to take. Advice is mixed with some organizations saying taking feeders down isn’t necessary, while others recommend it. We gathered opinions from a few quality sources.

The National Audubon Society currently “recommends its members to follow the guidelines provided by local and state agencies. As spring migration ramps up, Hutchinson also urges birders visiting parks with waterfowl to disinfect their shoes afterward, which can help prevent transmitting the virus to unaffected areas.”

Cornell says, “there is currently very low risk of an outbreak among wild songbirds, and no official recommendation to take down feeders unless you also keep domestic poultry, according to the National Wildlife Disease Program.”

Source: Avian Influenza Outbreak: Should You Take Down Your Bird Feeders?

3. The Raptor Center (College of Veterinary Medicine, University of Minnesota)

TRC says, “In areas with HPAI transmission in any avian species, consider pausing the use of bird feeders and baths for the next couple of months until the rate of virus transmission in wild birds dramatically decreases.”

In their view, the science is still unclear on the role of songbirds in the 2022 H5N1 outbreak, so it is best to be overly cautious and not encourage birds to gather.

“So far, the virus is not thought to be spread by bird feeders, though various health agencies recommend caution with feeders located near backyard poultry flocks. It’s always good practice to regularly clean bird feeders,” says the Seattle Audubon.

Birds Canada says, “the use of bird feeders is still safe on properties without domestic poultry. Avian influenza does not affect all bird species in the same way; while it can cause severe illness and death in domestic poultry flocks, it is currently not considered a disease threat to feeder birds.”

A press release issued by the Illinois DNR asks people living in their state to take bird feeders and bird baths down at least through the end of May, or until infections in the midwest subside.

They are also advocating for cleaning feeders and baths with a bleach solution before putting them away. More states are emerging with this same recommendation.

How to protect birds from avian flu

What are the symptoms?

The main symptoms are neurological and respiratory, and can be fatal.

Infected birds may seem disoriented. We know birds are usually pretty graceful, so if they appear unusually clumsy, uncoordinated or are moving their head in strange ways, it could be a sign. Sneezing and discharge from the nostrils are two common respiratory symptoms.

Many birds carrying the milder version of the virus do not present symptoms, but can still transmit the virus.

How do birds get infected?

The virus is mainly shed in feces, but also nasal secretions.

The main transmission paths are:

Raptors and potentially other scavenging birds are thought to become infected by eating an infected bird.

Can you get bird flu from bird feeders?

Thankfully, it is considered rare for avian flu to be transmitted to humans, especially for those that do not come into frequent contact with infected birds. However you should always take precautions.

Wearing gloves when touching or cleaning your bird feeders/baths is a good idea. At the very least, make sure you are thoroughly washing your hands immediately after any contact with your feeders or bird baths. Remember, they rub their face and body on these surfaces, not to mention poop on them.

If you do keep poultry or ducks on your property, or work more closely with any birds, there are stricter precautions you should follow. You can find more specific information for your situation here on the Centers for Disease Control and Prevention site.

Are hummingbirds affected by avian flu?

I couldn’t find a source that stated if hummingbirds can be carriers of avian flu. In theory, they probably have a lower chance like songbirds. It is believed that hummingbird feeders present a lower risk than other types of bird feeders. This is because it attracts a much smaller variety of birds.

Based on historical data, it is not believed that songbirds are significant carriers or transmitters of avian flu, and backyard bird feeders don’t likely pose much risk.

However, some researchers believe infection among wild birds is becoming more common, and may pose a problem to a wider variety of birds than previously thought. There just isn’t enough data yet to make a concrete determination, but I’m sure a lot will be learned during this current outbreak.

Until then, it is probably best to follow what your local health authorities are recommending. If you are leaving your feeders up, clean them a minimum of every two weeks in a 10% bleach solution.