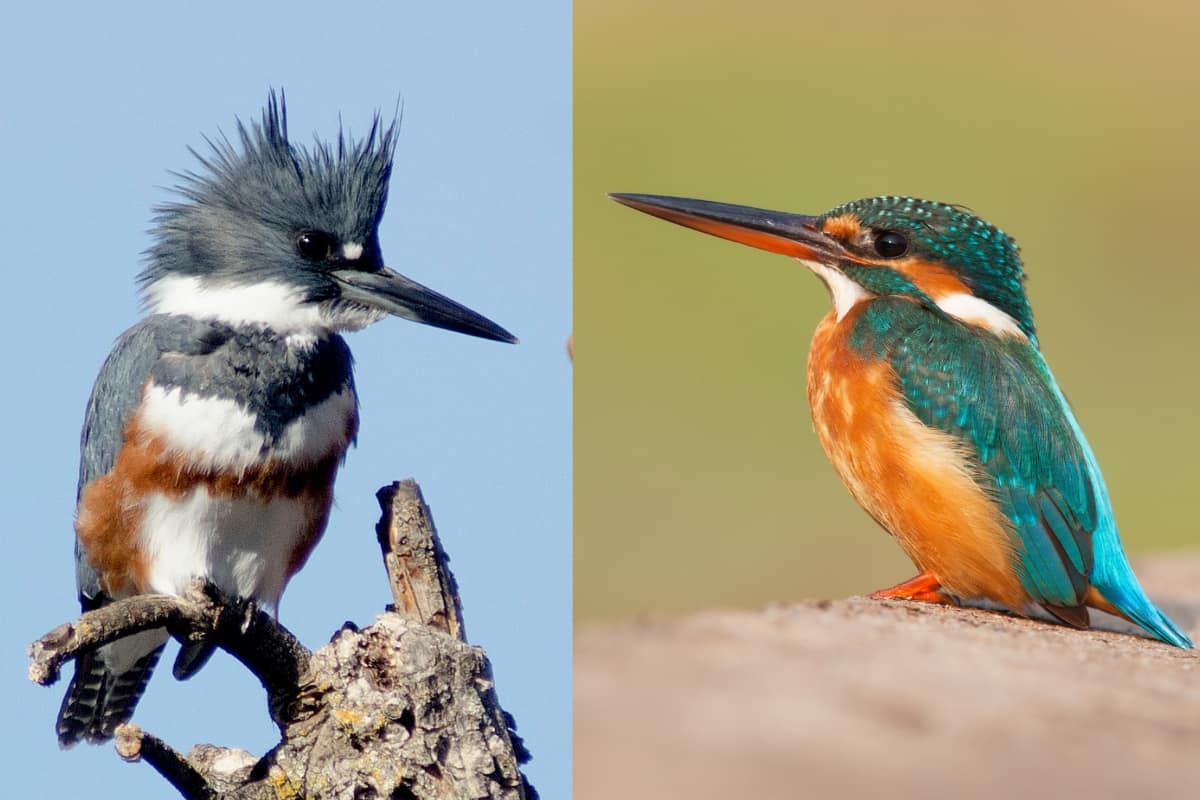 Most kingfisher species live outside of the United States. These birds make their home on continents around the world, including Europe, Asia, and Africa. These predatory birds hunt for fish, small amphibians, lizards, and even other birds. They utilize their oversized bill and strong sense of vision to spot moving prey, even underwater. Continue reading to learn more about 13 types of kingfishers living around the world!

There are over 100 species of kingfishers world wide, most living in tropical areas of Africa, Asia and Oceania. But they can also be found in Europe, and here in the United States. Kingfishers shape is marked by a stocky body with a large head, but no noticeable neck. They have an extra long, thick, pointed bill like a sword, very short legs and stubby tails. Fishing is what they are best known for. They often perch above water and gaze down searching for fish, then dive headfirst to grab their prey out of the water. Although some species rely more on insects, amphibians or crustaceans.

Belted Kingfishers are one of the only kingfisher species native to North America. They live year round in most of the United States and migrate between Mexico and Canada in the spring and fall.

Look for Belted Kingfishers perched on a branch or strong reed beside a stream. They dive headfirst into the water to spear fish on their sharp, oversized beak. Males and females are identical except males have a blue breastband and females’ breastband is blue and brown.

This kingfisher is tiny – just the size of a sparrow! Males and females are an identical bright azure blue. The only difference is that the female’s lower beak is orange tipped in black. Spot them alongside rivers, where they perch and hunt for fish.

Collared Kingfishers are medium-sized tree kingfishers that live from the Mediterranean all the way to Polynesia. Their bright blue and white feathers stand out against the green and brown foliage of the swamps where they live.

Because this kingfisher lives along coasts, it eats more crustaceans and insects than inland-dwelling kingfishers do. Crabs and shrimp are some of its favorite prey.

South America’s Green Kingfisher is a bright spot of copper and green in the lush jungles of the Amazon. It lives on the east side of the Andes mountains as well as throughout Central America and Mexico.

Like most kingfishers, it perches on a branch or reed beside a shaded stream, where it hunts for fish. Because of their call – a ‘ticking’ noise – you’re more likely to hear them before you see them. Only males have a copper breast; females’ are green and white striped.

The Giant Kingfisher’s coloring differs from most kingfishers. Their back, head, and tail, is slate grey with white dots. Males and females share a copper breast but females have a band across the chest.

This bird is native to sub-Saharan Africa, where it lives year round. Breeding pairs are monogamous and work together to raise young. This is the largest kingfisher in Africa at around 18 inches long.

It’s hard to miss this orange-beaked kingfisher! The Malachite kingfisher hangs out on tried-and-tested perches, where it stares into the water in wait for prey. They beat large fish against a tree or rock to subdue them before eating.

You’ll only see this kingfisher in Africa, south of the Saharan desert. They live nearby the streams and rivers of open woodlands and thickly wooded areas.

Amazon Kingfishers are found in – you guessed it – the Amazon rainforest. They are bigger versions of the Green Kingfisher, which shares the same range.

Instead of perching far above the water, Amazon Kingfishers perch close to the water’s edge in search of prey. When they spot a fish or frog, they dive beak first to stab their quarry. These kingfishers also eat insects.

Woodland Kingfishers are some of the most dramatically-colored kingfishers. The basic copper-and-indigo color scheme is nowhere to be seen with this bird. The front part of the body is white, but the wings and back are a mix of black and bright light blue. They have bright reddish-orange beaks.

People living in this bird’s native habitat – Africa south of the Saharan desert – say its call sounds like a fingernail running down the teeth of a comb. While members of the kingfisher family, this species prefers drier woodland habitats and doesn’t need to be near water. Their diet consists of grasshoppers and other insects, lizards, snakes and frogs.

This bird is one of the largest of all kingfishers, and its range is confined to mountainous regions of Asia, northern India, and Japan. It prefers to stalk fish and underwater prey from a perch alongside mountain streams.

Its coloring is a salt-and-pepper polka dot of white and black, not to mention a dramatic ragged crest. Parents work together to build a burrow and feed the chicks, but only the female incubates the eggs.

You’ll find Pied Kingfishers by the forests and streams southern Africa, southern Asia, and Turkey. These black and white birds are year-round residents of these areas, where they noisily announce their presence to streams and rivers.

Fish aren’t the only component of the Pied Kingfisher’s diet. They also eat crustaceans and insect larvae. Unlike other kingfishers, they don’t have to return to their perch to eat their catch. They can eat while flying, which allows them to hunt over larger bodies of water.

Australia and New Zealand are home to this medium-sized kingfisher, which has a dusky cream breast and a blue-green back and head. Males and females have similar coloring, but males are more vibrant.

They live in wetlands, farms, and parks, where they prefer to eat terrestrial prey. They perch on a branch and lie in wait until a potential meal goes by. These kingfishers can have two broods per breeding season.

Ringed Kingfishers are one of the handful of kingfishers native to the Western Hemisphere. They live in South America and portions of Central America, where they dive for fish in streams.

They are almost as big as crows, and just as loud. Their call is a raspy rattle that is impossible to miss. Because they catch large fish, their bill has special serrations called tomial serrations that act like a serrated knife edge to grab onto slippery scales.