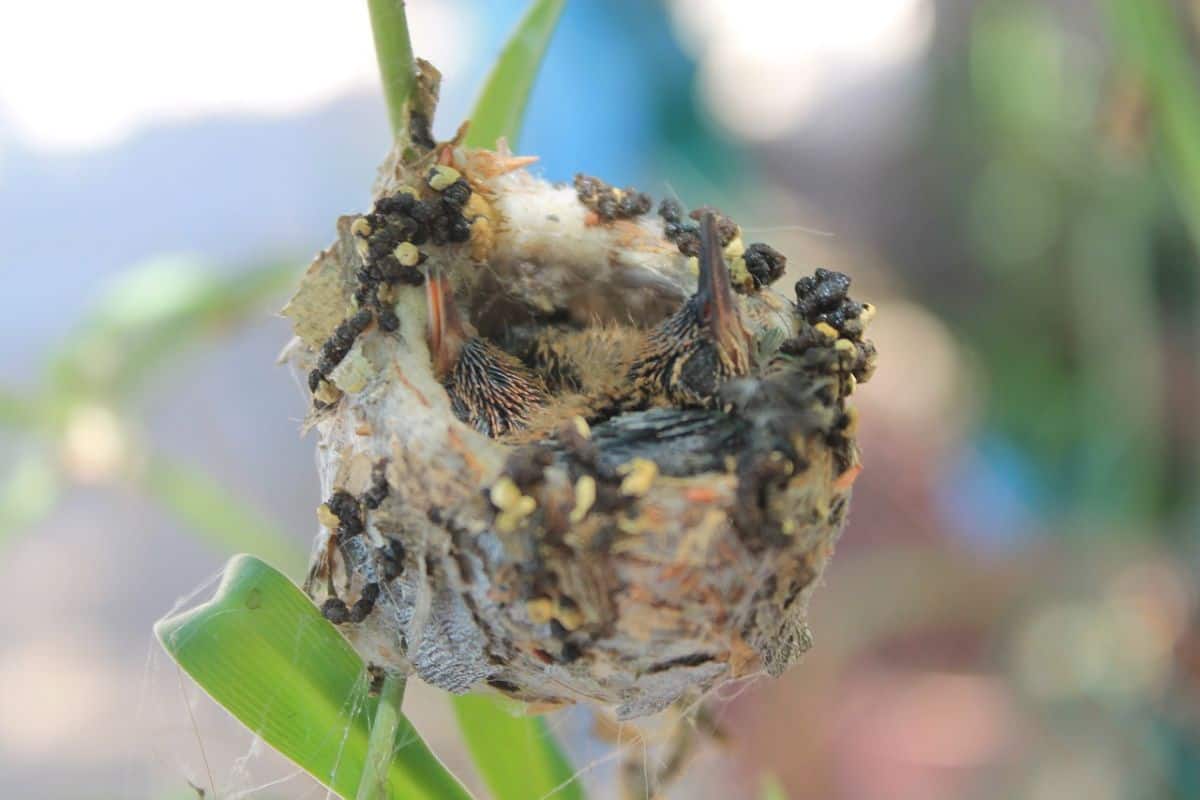 Seeing a hummingbird up close can almost feel like a magical experience. Their delicate beauty, speed and unique character make them a favorite among bird and nature lovers. Those of us lucky enough to see them may wonder, where they spend their time. Where in the world do they live? Where do they nest? Where do they sleep? Let’s explore their habitats and where they spend their time day-to-day.

Where do hummingbirds live?

There are approximately 340 different species of hummingbirds in the world. Interestingly, they only live in the Western Hemisphere (North and South America). You can find nectar drinking birds on continents like Africa and Asia, but they are sunbirds, not hummingbirds.

Why don’t hummingbirds live in Europe, Africa or Asia? Scientists are not yet sure. What they do know, is that at one time in the distant past, hummingbirds DID live in the western hemisphere. The oldest hummingbird fossils we have are from Germany, Poland and France, at about 30-35 million years ago. We don’t know how hummingbirds traveled to the Americas, or why they seemed to abandon the Western world altogether. It is an interesting mystery scientists are still unraveling.

What we do know is when they reached the America’s, they found little competition, and were able to spread and populate quickly. They have the ability to evolve rapidly to make use of their specific environments.

The majority of hummingbirds live in the tropics. Colombia and Ecuador boast 130-160 different species, whereas only 17 species consistently nest within the United States. Most of those 17 are found relatively close to the Mexican boarder. However there are hummingbirds as far north as southern Alaska, and as far south as the southern tip of Argentina at the bottom of South America.

Only the ruby-throated hummingbirds nest east of the Mississippi River. Most U.S. states only have one or two species that are common. Southern California has three species that will show up at backyard feeders commonly, Anna’s, Allen’s and Costa’s. Southern Arizona boasts some of the highest hummingbird diversity in the U.S. with up to 14 species visiting in a year.

They can live in jungles, deserts, forests, along meadows and fields, and even mountainous areas such as the Rockies and the Andes.

Hummingbirds diets consist of nectar from flowers and insects. Therefore they will be more apt to be found in wild, suburban and rural areas where more food is available to them than in a big city. But some hummers are are starting to give big-city life a try.

In 2014 a ruby-throated hummingbird made local news when it nested in New York City’s Central Park, something that had never happened before according to records. The Audubon has also reported that Anna’s and Allen’s hummingbirds are doing well in San Fransisco.

As a city dweller you can still attract hummingbirds to your space by putting out feeders for them, and further drawing attention to your space with flowering plants. Even if you live in an area where they don’t normally nest, you may be able to attract them for a short period of time during their migration. In spring they head north, and in late fall they head south. The journey takes a lot of energy and they need to make stops for food, your home could be one of them if you have a feeder set out for them. 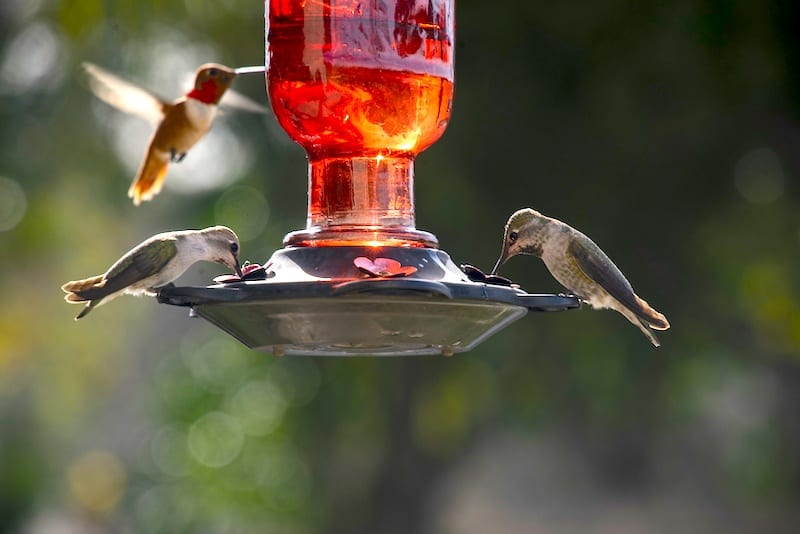 Where do hummingbirds migrate?

Most of the hummingbirds that live in Mexico and South America are not migratory. However most species found in Canada and the United States do migrate south in the winter. A few of the species in the southernmost regions of South America also migrate up closer to the equator during winter.

In warmer U.S. climates such as Floria, California and the southwest desert areas, some species remain year-round. Anna’s hummingbirds stick around in southern Arizona and California, while Buff-bellied hummingbirds remain all year in Florida and southern Texas.

The Rufous hummingbird is the farthest northern-breeding bird of all the hummingbirds, and is also one of the longest-distance migrant birds in the world (by body length). They spend their winters in Mexico, then travel almost 4,000 miles north along the Pacific Coast in spring to spend their breeding season in the northwestern corner of the U.S., western Canada all the way up into southern Alaska. Then in the summer they start south again and travel back down through the U.S. along the Rocky Mountains. That’s an amazing feat for a bird that’s only 3 inches long!!

After migration, when it’s time to set up shop for awhile, most hummingbirds will stake out their own territory and defend it against other hummingbirds. They do not like to overlap or share their territories. A typical sized territory is about a quarter acre.

Males look for an area with the best available food and water. If they can find a prime spot with a feeder and/or lots of nectar bearing flowers, they won’t have to travel far to forage for food. You may have seen males at your feeders chasing away other hummingbirds.

This video is a great example of hummingbird antics at a yard feeder.

Males will even chase away females, until they mate. After mating the female is allowed into his territory. This usually means she can nest in a spot with ample food and won’t have to be off her nest for long looking for it. Females will forage for food about in an area up to half a mile from their nest. But the longer they are off their eggs/young, the greater chance that they may die.

Do hummingbird return to the same feeder every year?

Yes, they very often do! Your feeder is a steady source of food which is highly prized and the lucky hummer that finds it will often return back year after year. The average life span for most in North America is about 3-5 years but they can live to even 9 or 10.

Where do hummingbirds nest?

Hummingbirds usually build their nests in trees or shrubs, between 10-50 feet up. They don’t use cavities or birdhouses. Slender branches are preferred, especially at a “fork” where two branches join together to give them a more solid foundation. They have also been known to use electrical wire, clotheslines or other small horizontal surfaces.

They weave plant fibers, lichen, twigs and leaf pieces together into a soft cup shape. They often use spider web threads to bind them to branches. The inside of the nest is lined with the softest, fuzziest materials hummingbirds can find, to cradle their eggs. These are some tiny nests – about two inches across and one inch deep.

Specifics vary by species but the females will sit on the eggs for about 2 weeks before they hatch, then it will be another 2-3 weeks before the youngsters are fully fledged. Many hummingbirds will then start the process over for a second or even third brood before their breeding season is over.

If you have females coming to your feeder, chances are good their nest is not far away.

Where Do Hummingbirds Sleep?

If a female has eggs or young still unable to leave the nest, she will sleep on the nest. Otherwise, they will find a favorite perching spot that they feel safe and protected in. Then, they enter a state of hibernation called torpor.

Torpor is a very deep sleep, much closer to hibernation than sleep like you or I have every night. Their body temperature drops as low as possible, and their heart rate goes down to about 50 beats per minute. Their metabolism lowers to 1/15 of their normal daytime rate. You can barely even see them breathe. They sometimes even hang upside down like bats, unresponsive and seemingly dead.

But no worries, they aren’t dead at all. They do this to save energy. In fact they can save up to 60% of their available energy this way. It’s a real intense process for their bodies to go through, and it can take them 20-60 minutes to “wake up” from it. (Like me before coffee, ha!) Hummingbirds metabolism is so high and they burn so much energy, the may not be able to make it through the night without eating if they did not do this.

Hummingbirds reside throughout North and South America, with the highest concentrations and diversity in the northern half of South America. In late winter/early spring many species travel long distances to their breeding grounds. Once there, they seek out the best spots for food and water, and will claim and defend their territory. They spend their days eating and keeping watch of their territory (males) or eating and nesting/tending to young (females). At night they go into a deep sleep, then wake up each morning to immediate feed. By middle-late summer, those that migrate head back to warmer winter grounds.