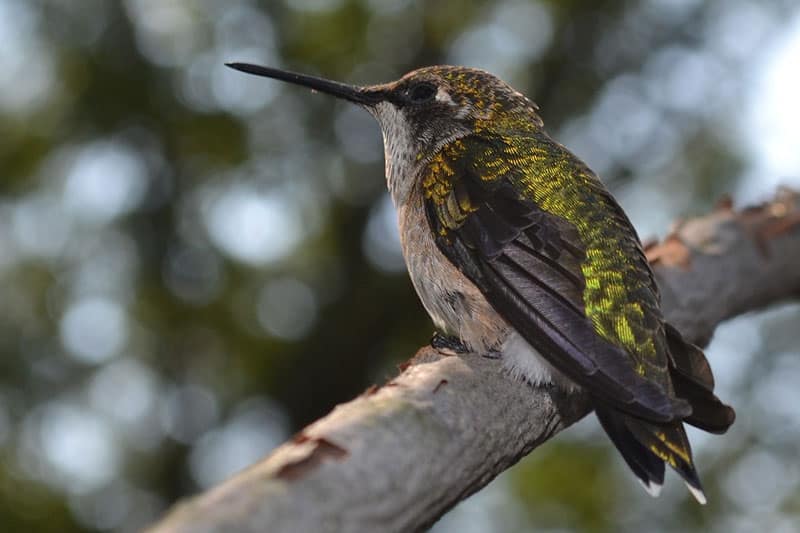 If you’ve ever enjoyed watching hummingbirds you might have wondered, how long do these tiny birds live?

An average hummingbird lifespan is 3 to 5 years. That being said, hummingbirds can live anywhere from 3 to 12 years. This is dependent on them surviving their first year. The time between hatching from the egg and their first birthday is the most hazardous time in their lives.

Just how long hummingbirds live is a question many bird watchers ask. The tiny creatures are surprisingly hardy, with average lifespans overall of 3-5 years in the wild. Hummingbird lifespans for North America are generally included within that 3-5 year average, but some breeds have been observed to live to 9 and even more than 12 years old.

Many hummingbirds do not survive their first year. They are considered “juveniles” until they reach full maturity at 1 year of age.  Generally speaking, this is when they will start mating and producing their own offspring. After that it is a matter of surviving predators, finding food, and protecting their young for the remainder of their lives. This lifecycle can repeat for many years or just a few.

The oldest recorded Ruby-Throated Hummingbird was a 9 year old female. These hummers have the largest breeding ground of any North American variety, and are the only breeding hummingbird species on the eastern half of the continent.

Named for his mostly black chin, which has a thin strip of purple feathers, the oldest Black-chinned recorded was 11 years old.  After hatching, hummingbird young will remain in the nest for 21 days. As adults, females will care for up to 3 rounds of young per year.

The oldest known Anna’s hummingbird was 8 years old. The male’s pink colored bib (called a gorget) extends over its head unlike many species. They are found exclusively along the west coast of North America.

Allen’s hummingbirds may have a bit of a shorter lifespan, with the oldest recorded at just under 6 years old. They breed in a small area along coastal Oregon and California, then either stay put in southern California or migrate down into Mexico for the winter.

The oldest recorded Rufous hummingbird was nearly 9 years old. They are fiercely territorial and will attack other hummingbirds and even chase larger birds and chipmunks away from their nests! They also make one of the longest migrations of any bird in the world (measuring by body length).

The oldest recorded Broad-Tailed hummingbird was just over 12 years old. A truly “mountain” hummingbird, they breed at elevations up to 10,500 ft, mainly along the Rocky Mountain range in the U.S. After August they head south to winter in Mexico and don’t return to the U.S. again until late spring.

The oldest recorded Calliope hummingbird was 8 years old. These sweet little hummers are the smallest birds in the United States, and weight about as much as a ping pong ball. That being said these tiny birds can be very aggressive, even diving at predator birds such as hawks during the breeding season.

The oldest known Costa’s hummingbird was 8 years old. The male Costa’s have a slightly different look, with bright purple feathers that extend out from their chin on each side like a violet mustache. You’ll only catch them in small pockets of the U.S., mainly the Sonoran and Mojave Deserts. They also extend down into the west coast of Mexico on either side of the Gulf of California.

How do hummingbirds die?

Hummingbird death is common in the first year of life. Up to the first 3 weeks of their lifespans will be spent in the nest. Female hummingbirds raise their young alone, meaning they are providing food for themselves as well as their babies. This translates into a lot of time away from their young, leaving them prey to other animals, accidents, or any number of other hazards.

After everyone is flying and a mother chases its young away from the nest, they are basically on their own to hunt or forage for food, as well as survive. Additionally, hummers are generally solitary. Some are highly territorial and chase other birds away from them as well, so they are largely on their own out in the wild.

There are numerous hummingbird predators. These animals will eat hummingbirds as prey. Other animals, especially other birds, might kill hummers who enter their territory as a means of protecting their food sources. Being so small and unique, these little birds also are confused for other animals and sometimes accidentally killed for that reason. We dive into the specific causes of hummingbird death in the sections below.

What causes a hummingbird to die?

As far as warm-blooded animals go, hummingbirds require a high intake of calories. In fact, in order to fuel their incredibly high metabolisms, they must consume half their body weight in sugar each day. This can be hard to keep up with in bad weather, changing seasons, unfamiliar environments, while dodging predators, etc.  This means they are always in danger of starving.

Hummingbird feeders are lovely to have in your yard, but if not kept clean and refilled regularly, bacteria and fungus will grow in the sugar causing fermentation. Once this is eaten by a hummingbird this can cause fatal illnesses and infections.

An ill hummingbird might mean their system shuts down, but just as detrimental is any hindrance to their movement. If a hummingbird cannot beat its wings at full capacity it cannot access food quickly. They need rapid movement to stay in the air and feed and if their internal systems have slowed down, starvation becomes a real risk. Fungal infections can also cause their long tongues to swell and impair their ability to feed. So in this case the hummingbird would technically die from starvation, but it was due to an infection.

It is rare for hummingbirds to die due to weather changes. Most migrate or are able to take cover and go into a hibernation-like state called torpor if needed. They’re very adaptive as well: we’ve seen hummingbird ranges shift and their migratory patterns change as the weather has warmed globally.

However, any extreme weather changes that affect access to food is also an immense danger to them. Sudden snows, freezes that drive animals underground or block access to plant food sources, are not a friend to hummingbirds.

Habitat loss due to urbanization is always a concern for animal species. The way this most affecting hummingbirds is by removing large areas of wild land where their natural plant and insect food sources occur. Humans have also introduced many non-native plant species. These can sometimes grow out of control and displace native species that the hummingbirds depend on for food.

Sometimes hummingbirds are killed by other animals. Their predators include large aggressive insects (such as praying mantises), spiders, snakes, birds, hawks, and owls. Other animals may mistake hummingbirds for something else and attack and kill them. Some examples of these are frogs, who mistake the tiny birds for insects above the water. Cats, both feral and domestic, are also a hazard to hummingbirds.

Many animals that attack them will lie in wait, stalking them from somewhere hidden. Typically they set up near where the birds feed or nest. This means keeping your feeder out in the open is a great way to ensure hummingbirds can feed in peace.

How long do hummingbirds live without food?

If a hummingbird were to continue flying as normal without food, it could starve to death in 3 to 5 hours. Hummingbird metabolism is famous. The constant beating of their wings, around 53 times per second on average in North America, takes a great amount of energy.

Typically they have no problem gathering enough food and it takes up the majority of their day to do so. If food becomes scarce in one area the birds will migrate elsewhere to track down a new source. This is why they have such large ranges and move with the seasons.

All that being said, getting trapped is a very real issue for hummingbirds. Garages or garden sheds pose a very real threat if doors are left open and one wanders in. Being stuck in an enclosed space for more than a couple of hours will harm a hummingbird and possibly lead to its death from starvation.

Do hummingbirds die if they stop flying?

Flying is, however, their main speciality.  Not only do they have specially shaped wings, but their breast muscles that power the wings take up about 30% of their body weight! For most birds it is only about 15-18%. Those little wings are quite the machine. Even their brains are specialized to perceive fast motion and movement in all directions differently than other animals. They’ll usually eat half their weight in sugars to be broken down for energy in a day and under normal circumstances feed a few times an hour. That means they need to eat often, so keep those feeders filled!

Hummingbirds might stop flying for a rest, but they also stop doing so at night. This is when they settle into a state called torpor that drops their internal temperature and slows most of their systems. While in this hibernation-like state they may be found clinging to a perch upside down. If you find a bird like this, don’t be alarmed! Just let it rest.

Can hummingbirds freeze to death?

Hummingbirds typically migrate during the winter to warmer climes. Some, like the Rufous hummingbird, travel thousands of miles.

This may lead one to believe the cold is a direct peril to hummingbirds, but the truth is that these birds are unlikely to freeze to death. Many species, including Anna’s hummingbirds, can feed in the low twenties or even teens. If things get too cold, they can also go into torpor, similar to how they sleep.

Cold becomes dangerous because it generally limits availability of hummingbirds main food sources. Plants stop flowering, tree sap becomes inaccessible, bugs die or are driven elsewhere. So just like other threats to hummingbirds, it really comes down to their access to food.

Most hummingbird life cycles include a period of being fed by their mothers after leaving the nest. This learning period teaches them how to survive and gather food by themselves. As soon as hummingbirds are out on their own, most mothers will begin building the next nest to lay her eggs and start the process over again.

Male hummingbirds will usually not be involved in raising young. Instead, the female builds the nest and incubates eggs for anywhere from 2 weeks to 18 days. At around 9 days, hummingbirds will begin testing their wings, and around 3 weeks into their lives they can begin leaving the nest.

They are very vulnerable to predators while in the nest and just “getting their wings” so to speak. They are also more apt to fall prey to starvation during this first year of learning how to find food and their first migration.