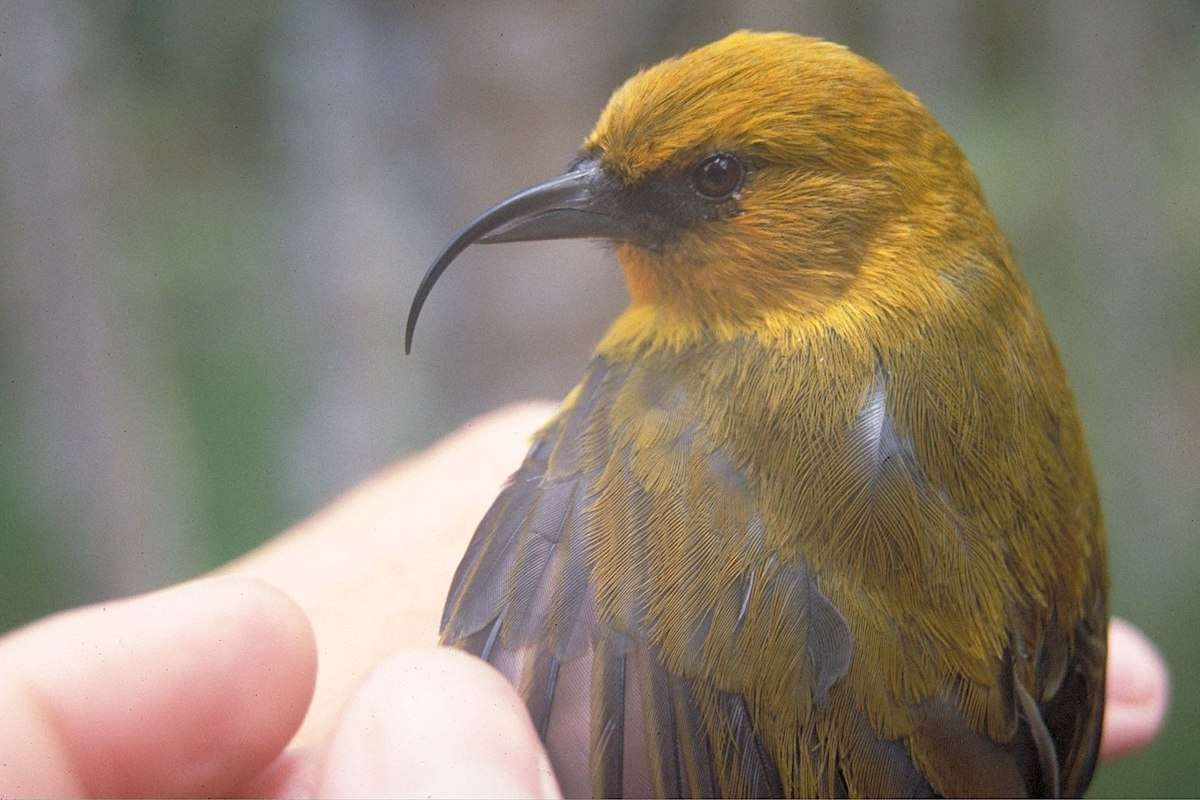 Nearly 2,000 miles from the nearest continent, wildlife can be quite unique on the isolated islands of Hawaii. There are generally two categories of birds, those endemic to the islands that aren’t found anywhere else, and those that were introduced from other parts of the world. When it comes to woodpeckers in Hawaii, you may be surprised to learn that there is only one!

Species found in Hawaii can come from all over the world. Some may be blown in by storms, hitch a ride on boats, or be accidentally introduced by humans. While it is possible that a woodpecker has inadvertently made it to Hawaii in the past, I could not find any recorded sightings of woodpecker species.

So if a wayward woodpecker did land on Hawaii, they were not able to establish a population. There is, however, a bird that has evolved to fill the woodpecker role. Meet the ʻakiapōlāʻau!

The ʻakiapōlāʻau (pronounced ah-kee-ah-POH-LAH-OW) isn’t technically a woodpecker, but a member of the honeycreeper family. Honeycreepers evolved on Hawaii to have longer, curved bills that allow them to drink nectar from inside flowers. The ʻakiapōlāʻau, however, acts more like a woodpecker than a honeycreeper, and is sometimes given the nickname of the Hawaiian woodpecker.

But back to the woodpecker wannabe.

Males are bright yellow while females are duller olive. They have a black bill, where the upper bill extends far out past the lower bill in a downward curve. Unlike other honeycreepers, they don’t often drink nectar. Insects such as spiders and beetle larva make up the majority of their diet.

Their curved upper bill can also be used to probe bark and rock crevices. They may also eat sap that flows out of the holes they’ve created. Check out this video showing the ʻakiapōlāʻau displaying its woodpecker-like behavior.

These birds are found on the island of Hawaii (the “Big Island”) in high-elevation montane forests, typically between 4,500 – 6,900 feet. Nests are built most often in ohi’a trees, where one egg (rarely two) is laid.

The female handles incubation of the egg while the male brings food to her and the nestling, once hatched. ʻAkiapōlāʻau’s reproduction rate is rather slow. Only one egg-laying is attempted per year, and not all of the eggs will reach maturity. So best case scenario, each pair will have one baby per year.

Unfournately, ʻakiapōlāʻau are an endangered species, with only a few hundred remaining. It is believed they were common in the late nineteenth and early twentieth centuries, but began to decline soon after. There are a number of factors affecting their decline.

Rats and cats, both introduced species to the island, eat both the birds eggs and the birds themselves. Habitat loss has occurred from human development, logging, and grazing. Not only does this mean less habitat for the birds to nest and eat, but it fragments the population, forcing them into smaller groups.

Avian disease is also a problem, transmitted to the birds from mosquitoes. Mosquitoes and the diseases they carry are not native to the island, and birds such as the ʻakiapōlāʻau have no immunity. By staying at or above 4,500 feet elevations, the birds can avoid mosquitoes, but it limits the available habitat.

It may be surprising that no true woodpeckers are found in Hawaii, but with its isolate location there are many species we are used to hearing about that never reached the islands. However many native Hawaiian birds have evolved to fit different ecological niches. The ʻakiapōlāʻau takes the woodpeckers place as a bird that uses its impressive bill to bore holes in bark and probe crevices to find hard-to-reach insects.