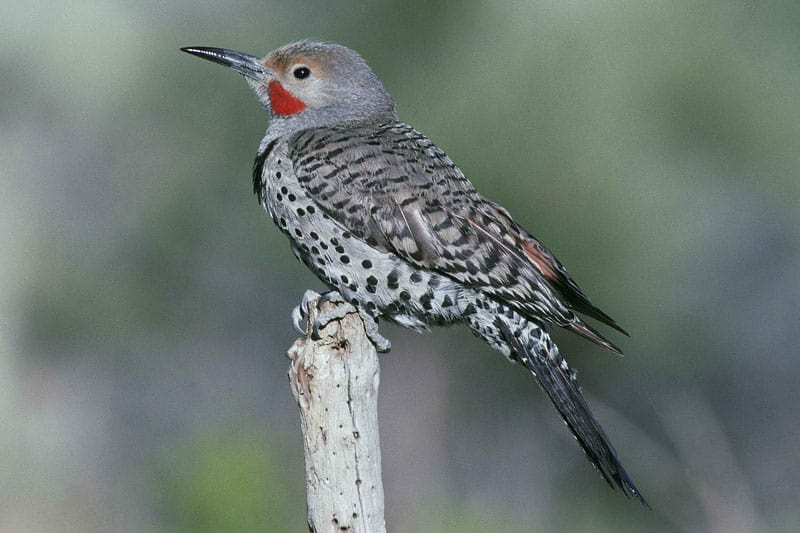 When one thinks of New York, the first thing that comes to mind is most likely the concrete jungle of New York City. However, this state has a lot more to it than just the big apple. It’s home to the Adirondack Mountains, Niagara Falls and Adirondack State Parks, and is bordered by the Atlantic Ocean. Over 20 species of mammals and birds are found here including birds of prey, waterfowl, hummingbirds, and songbirds just to name a few. For this article we’re going to take a close look at the 9 species of Woodpeckers in New York and how to find them.

Species of Woodpeckers in New York

Pileated Woodpeckers have a few key characteristics that make them easily identifiable. They are the largest woodpeckers in North America, with large, flaming-red crests at the tops of their heads and bold white stripes down the sides of their necks. These woodpeckers are often heard before they are seen, either drumming into trees with their long, chisel-like bills, or calling with their loud, high-pitched whinny.

Find Pileated Woodpeckers year-round in New York, in forests that have plenty of tall trees and downed, rotting logs. Unique, rectangular shaped holes in wood are a distinct give away for these birds, indicating that they may be in the area.

Red-headed Woodpeckers are primarily found in the south eastern and central portions of America, but breeding populations are found in New York during the spring and summer. They’re medium-sized birds with short tails, strong bills, and bright red heads. The rest of their striking coloration shows black on their upper parts with contrasting, bright white bellies and half black, half white wings.

These woodpeckers tend to occur in small colonies. They favor woodlands with clearings, the edges of forests, and other semi-open areas. Listen for deep tapping on trees, or for their sharp “wee-ah” calls to locate them. Red-headed Woodpeckers are one of the most omnivorous woodpeckers species. In addition to foraging in trees, they will eagerly take advantage of other food sources such as flying insects, wild fruits, nuts, seeds, and sometimes even small rodents and other birds’ eggs.

Though not very widespread in the state, there are some year-round populations of Red-bellied Woodpeckers in southern New York. They tend to be somewhat more common than Red-headed Woodpeckers, and are sometimes confused for this  species due to also having red markings on their heads. The rest of their plumage is pale overall, with bold, black and white barring on their backs.

Breeding populations are found in New York during the spring and summer, in hardwood and coniferous forests. They’re particularly fond of aspens and will frequently nest in cavities in groves of these trees. Yellow-bellied Sapsuckers are known for drilling tiny, neatly spaced rows of sap wells. Look for these telltale signs next time you’re out birding, you might just be in Yellow-bellied Sapsucker territory.

Downy Woodpeckers live year-round in New York, and are commonly found in a range of habitats including open woodlands, forest edges, urban parks, and even backyards. They’re opportunistic foragers — drilling into trees like most woodpeckers in addition to foraging in tall grass and weeds, and also backyard feeders.

In fact, Downy Woodpeckers are among the most likely woodpecker species to visit feeders. These birds are the smallest woodpecker species in North America. In the winter they meet up with other flocks of small birds, such as chickadees and nuthatches to stick out the cold in larger numbers. 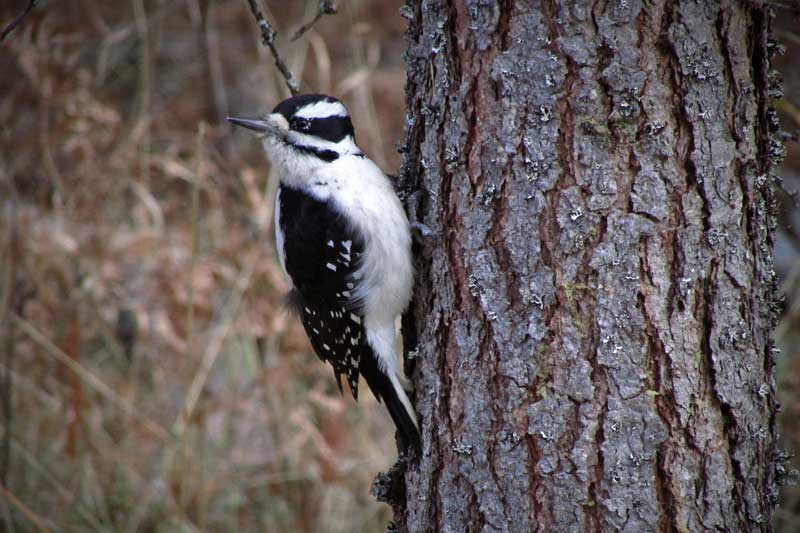 The Hairy Woodpecker is the larger look-alike to the Downy Woodpecker. The main differences between these two birds are their size and bill length, with the Hairy Woodpecker’s bill being significantly longer. Hairy Woodpeckers tend to stick to trees for foraging and are frequently seen perched on the sides of trees or around the trunks. They require taller trees and more forested areas than Downy Woodpeckers, and are less likely to appear at backyard feeders — though they will visit on occasion.

Hairy Woodpeckers are also found year-round in New York. They take advantage of the holes left by larger Pileated Woodpeckers, scoping them out for any insects left behind. They’ll also visit holes created by sapsuckers to finish off any remaining sap. These woodpeckers rely on wood-boring insects, and excavate a lot compared to other woodpeckers of the same size.

Throughout most of New York Northern Flickers are found year-round. However, at the very northern tip of the state, they may only occur during the breeding season. Northern Flickers stand out from the other species of black and white woodpeckers in New York due to the gray-brown plumage that covers most of their bodies. They also have plenty of dark markings on their undersides as well as brightly colored tail feathers — yellow for birds in the east and red for those in the west.

Although their range extends throughout the majority of Canada, scarce sightings of American Three-toed Woodpeckers may occur in northern portions of New York. They’re more frequent in disturbed, coniferous forests, such as those that were recently burned, or that have been infested with bark beetles. These woodpeckers forage by peeling and flaking the bark off of trees rather than by drilling like other woodpeckers.

American Three-toed Woodpeckers are small birds, larger than Downy Woodpeckers but smaller than Hairy Woodpeckers. They have short, yet strong, bills and primarily black and white plumage throughout their bodies.

Their white underparts show fine black barring. These woodpeckers are often overlooked, as they tend to perch very still on the sides of trees for long periods at a time.

Black-backed Woodpeckers look remarkably similar to American Three-toed Woodpeckers. They both have primarily white and black plumage with barring on their undersides. Both species of woodpeckers also like to forage in burnt and damaged forests, flaking the bark off of dead trees.