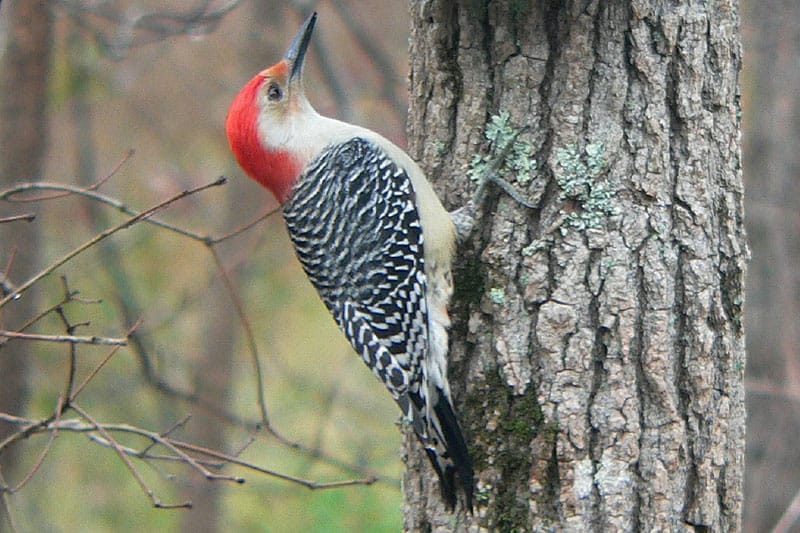 Tennessee has over 400 species of birds that call the state home. With the Appalachian Mountains and the Great Smoky Mountains National Park dominating most of the eastern portion of the state, as well as the Mississippi River bordering it’s west — it’s no wonder that such as vast selection of birds are found here. As far as woodpeckers in Tennessee go, one will not disappointed. There are 7 species of woodpeckers that reside in Tennessee, with the majority of them being found year-round. Keep reading below to learn all about these woodpeckers, their behavior, and where to find them.

Species of Woodpeckers in Tennessee

Tennessee has a solid range of woodpecker species to observe. Out of all 7 species found here, only one species, the Yellow-Bellied Sapsucker isn’t found year-round.

The first bird on our list is the largest species of woodpecker in North America — not including the Ivory-bill Woodpecker whose status is basically extinct. The Pileated Woodpecker is big, bold, and beautiful, with highly contrasting black and white plumage and a striking, pointed crest at the top of it’s head.

They look mostly black when perched on a tree trunk with white stripes down the sides of their faces. When in flight, the bright white undersides of their wings are easily visible. These woodpeckers have long necks, bills, and wings to match their large, crow-like build.

Pileated Woodpeckers are found year-round in Tennessee. Their loud drumming as they excavate dead wood is often heard before they’re seen. Their foraging also leaves behind unique, rectangular-shaped holes in wood and offers a clue to their whereabouts. Find them in mixed forests of conifers and hardwood, in areas where there is an ample supply of rotting logs or fallen trees.

The name of the Red-bellied Woodpecker is misleading. In fact, the vivid, red tops of their smooth heads are more noticeable than their overall pale, peachy colored bellies. Their upper parts are mostly black with fine, white barring all over. Red-bellied Woodpeckers are medium-sized woodpeckers in between the size of an American Robin and Crow.

Red-bellied Woodpeckers are adaptable birds commonly found year-round in Tennessee, in a wide variety of habitats. They’re frequently found in swamps and woodlands near rivers as well as orchards, groves, and suburbs. Learning their distinct, rolling call is a great way of locating them — they are especially loud and call frequently in the spring and summer.

Look for them hitched on the sides of trees, along the main branches and at middle heights. They don’t drill and hammer into wood as much as other species, but rather peel the bark off to reach the bugs underneath.

Tennessee is home to the largest woodpecker species, as well as the smallest — the Downy Woodpecker. These tiny guys are year-round woodpeckers in Tennessee, and are common visitors to backyard feeders and gardens.

Their small size in between that of a sparrow and a robin allow them to forage in places that larger woodpeckers can’t reach, such as delicate branches and tall weed stalks and grasses. They’re also known to blend into groups of small songbirds when feeding, including chickadees and nuthatches.

Downy Woodpeckers have the same black and white coloration that many other species of woodpeckers share. Their uppers are primarily black and white checkered, and males have a red patch at the tops of their heads. Their bellies are a stark white, and there’s also a bold white stripe that runs down their back. Compared to other species, the bills of Downy Woodpeckers are noticeably smaller in proportion to their heads.

They’re large birds with smooth, rounded heads, long tails, and down-curved bills. When in flight, one can easily spot the bright white patch located on their rear. The undersides of their wings vary in color depending on which side of the country they’re in. Flickers in the east have yellow coloration, while those in the west have red.

Find Northern Flickers year-round in Tennessee, in open areas, forest edges, and in various other woodlands. Be sure to keep your eyes on the ground when looking for them, though. These woodpeckers spend more time in the dirt rather than perched on the sides of trees. There, they use their specially-shaped bills to dig for their main prey — ants.

Unlike the Red-Bellied Woodpecker, the Red-headed Woodpecker really does live up to it’s name. These woodpeckers have shiny, red heads, bright, white bellies, and bold patches of black on their upperwings. They’re medium-sized woodpeckers with strong, pointed bills that help them bore into wood.

However, though they do quite a bit of hammering in order to forage, they also catch a lot of insects mid-air. These woodpeckers are also known to eat lots of fruit and nuts, going as far as to store extra rations away for the winter.

Red-headed Woodpeckers are found year-round in Tennessee, though they aren’t as common as other woodpeckers, such as the Red-bellied Woodpecker or Downy Woodpecker.

These are pretty active woodpeckers, and when they’re around their drumming and harsh calls are easily identifiable. They live in a wide range of woodlands with tall trees and open clearings. They also tend to be attracted to swamps and wetlands.

The appearance of the Hairy Woodpecker looks like a larger version of the tiny Downy Woodpecker. If it weren’t for the difference in size and bill shape, their plumage would seem nearly identical. Both birds share black and white plumage with lots of checkering on their upper-parts.

However, Hairy Woodpeckers have longer bills and tend to be less common due to their need for larger trees. For this reason they’re not as likely to appear in backyards or suburban areas as much as Downy Woodpeckers are

Hairy Woodpeckers are another year-round woodpecker in Tennessee. They’re found in all sorts of mature forests with tall trees, such as those with conifers, deciduous trees, and a mixture of the two. They’re also found in riverside groves and swamps, as well as forests that have recently been burned. Most of their diet consists of wood-boring insects and their larvae, so listen for their energetic drumming next time you’re out looking for them.

Instead, they drill neat little rows of holes that allow tree sap to flow out. However, this doesn’t mean they won’t eat any insects also trapped inside. They also take advantage of the plant material freed up from excavating such as cambium.

Yellow-bellied Sapsuckers only have small, pale patches of yellow on their chests and undersides. Both males and females have red foreheads, but only males have red throats. The rest of their plumage is black and white, similar to other kinds of woodpeckers.

They tend to spend the breeding season in the north, in areas including New England and throughout most of Canada, but in the winter they’re commonly found throughout Tennessee. During the winter, they’re usually found in open woodlands as well as orchards and groves.

HOW TO ATTRACT WOODPECKERS