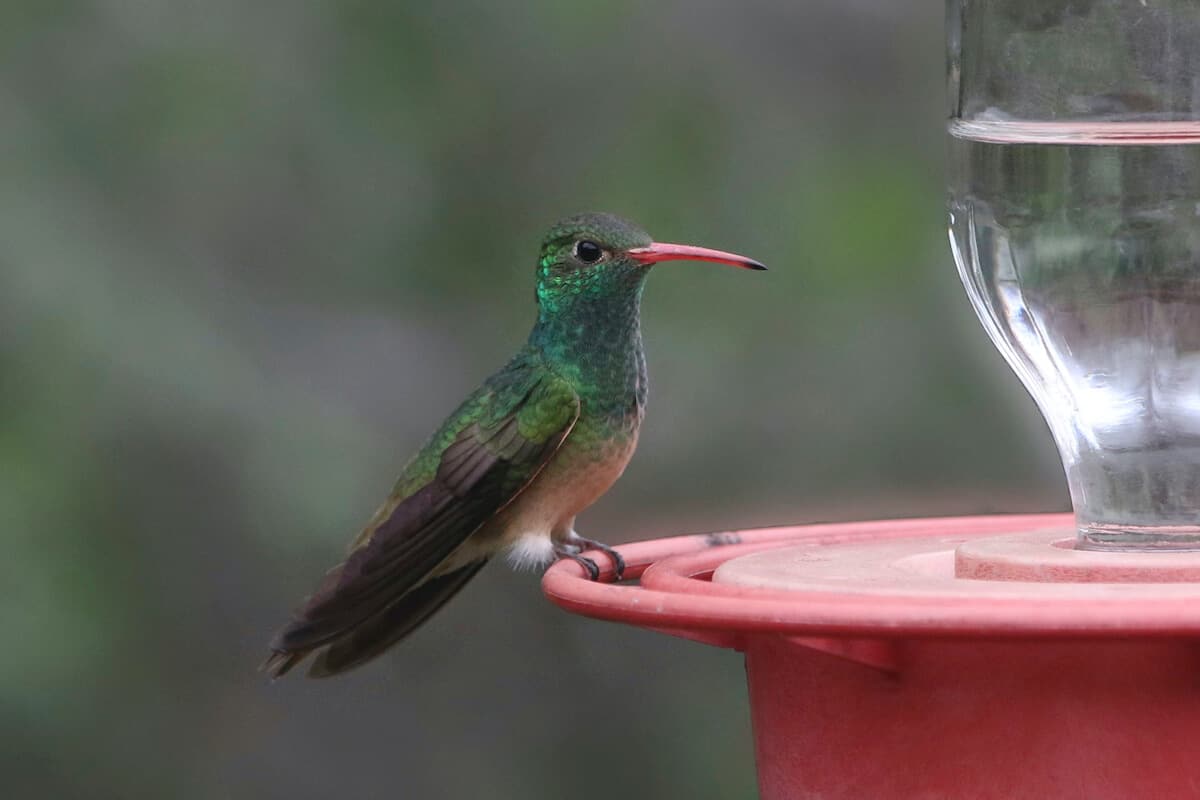 There are 352 species of hummingbirds in the Americas, with as many as 15 of those species regularly occurring in the U.S. and Canada. An additional 9-10 species will occasionally make an appearance in the states and are considered vagrants. The species we are looking at in this article is the Buff-bellied hummingbird, who lives exclusively along the Gulf coast in the U.S., Mexico and northern Central America.

We’re about to show you some up-close and personal images of this amazing species, and share some interesting facts and information.  Let’s dive in!

You may notice the buff-bellied hummingbird’s coloring is slightly different from the more well-known hummingbirds we are used to seeing in the U.S. Their red bill and buffy belly make them stand out. Another unique feature of this species is that they actually move north in the winter, while most other migrating birds move south.

The buff-bellied hummingbird is medium sized, and sports a red bill with a black tip. Their heads and backs are an emerald, bronzy green. Their throat patch is also iridescent green, but often appears a dark grayish-black depending on the lighting. They have a dark wing and a rusty-brown tail.

You can tell by it’s name that a main feature of this species is the buffy orange-peach coloring on its belly. This belly coloration is darker and more rusty in the population that lives in the Yucatan.

For the buff-bellied hummingbird, there isn’t a big distinction between males and females. Both have the same coloring. Colors on the female are paler and less flashy, while males are more vibrant. The green on the throat also tends to be more solid and dark in males than females.

Another small different is the bill. In males, both the upper and lower bills remain red all the way to the dark tip. But in females, the upper bill can appear duskier and darker.

The buff-bellied hummingbird is larger than many common U.S. species, and will tend to dominate over smaller species around food sources. They have been observed chasing away smaller hummingbirds while loudly vocalizing. It is believed that both males and females engage in this aggressive food-defending behavior.

These hummers have also been observed performing rapid and erratic flights in the early hours before sunrise. This could be a flight display directed at attracting females. 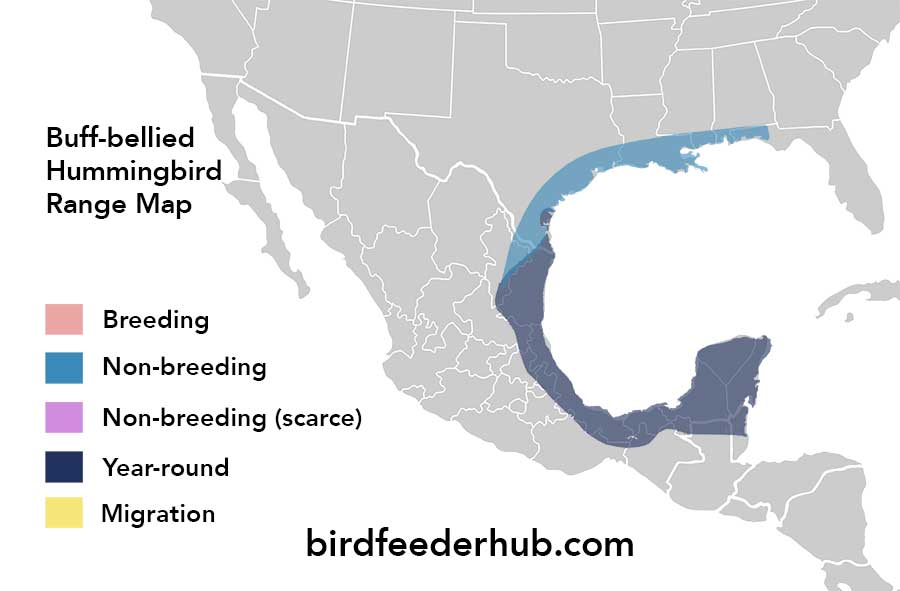 Winter (non-breeding): some of the population travels north along the U.S. Gulf Coast from Texas across to the Florida panhandle.

Breeding and Year-Round: lower Rio Grande valley in far southern Texas, down across eastern coastal Mexico, across the Yucatan Peninsula, into northern Belize and Guatemala.

These hummingbirds live in many lowland habitats, especially shrubby, wooded and woodland edge, scrubby fields, and even do fine in urban areas and backyards with nectar feeders and flowers. In southern Texas, they are often found in the Tamaulipan brushland and wooded habitat along the Rio Grande River.

Like many hummingbirds, it is only the female that builds the nest, incubates the eggs and raises the young. Nests are build in large shrubs or small trees (hackberry, Mexican olive, Texas ebony), typically between 3-10 feet off the ground. The small nest cup is made of plant fibers, with flowers, bark and lichen on the outer walls held together with spiderweb.

Each brood typically consists of two white eggs, and she will likely have two broods per year.

Most of the population is found in eastern coastal Mexico and very northern Central America. These hummers tend to stay in their local area year-round, or only travel short distances.

The only known breeding range in the U.S. is far southern Texas. During the spring and summer months they are considered a common hummingbird in several areas of coastal Texas. According to the Department of Wildlife and Fisheries Sciences at Texas A&M University, the buff-bellied will commonly visit flowers and feeders “in several urban areas (Kingsville, Corpus Christi, Rockport) and National Wildlife Refuges (Aransas, Laguna Atascosa and Santa Ana).” It is thought the breeding season in Texas lasts between March and August.

A small percentage will head north out of upper Mexico or southern Texas during the non-breeding season and spend the winter along coastal Texas, Louisiana, Arkansas, Mississippi and the Florida panhandle.

However, some of the hummingbirds that spent the breeding season in southern Texas will choose to move back down into Mexico for the winter.

There isn’t a lot of hard data on the population of buff-bellied hummingbirds, but they are thought to be stable. It is believed that habitat loss in its native region has likely lead to population decline, but that has not been directly studied. Availability of nectar feeders and an increase in winter-flowering planting along the Gulf coast may have contributed to their expanded winter range in the U.S. They are not currently listed on any endangered or threatened species lists.

Buff-bellied hummingbirds will visit backyards and feeders within their range. Like most hummingbirds, a nectar feeder, flowering plants and water are all great ways to attract them to the yard.

1. Buff-bellied hummingbirds are one of the largest found in the United States

In terms of large hummingbirds world-wide, the buff-bellied doesn’t even make it into the top 10. Compared to its tropical cousins, it is a medium-sized hummingbird. However it is larger than the other hummingbirds commonly found along the Gulf such as the ruby-throated and rufous. It uses its size to its advantage when chasing off others from its nectar sources.

2. Their red beak is uncommon in the U.S.