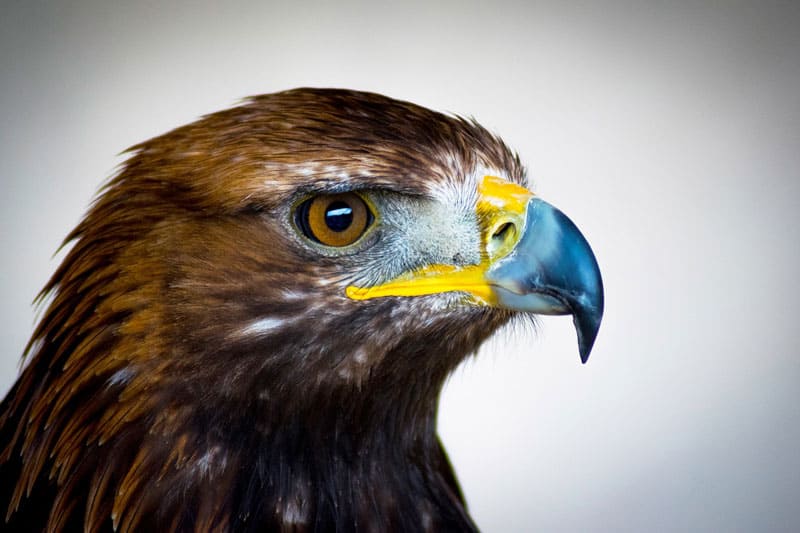 Eagles are large, powerful birds of prey with strong talons and heavy bills. Like other birds of prey such as the Red-tailed Hawk, they have keen eyesight — about three times the ability of a human’s. Their strength and majestic appearance have made them a symbol of war and power for ages, as well as frequent characters in stories and myths. There are over 60 species of eagles spread across the globe, but in this article we’re going to cover the eagles of North America.

Technically, only two species of eagles are regularly found in North America; Bald Eagles and Golden Eagles. However, there are two additional species that aren’t native to the continent, but have been spotted in North America on extremely rare occasions; the White-tailed Eagle, and Steller’s Sea Eagle. Sightings of these last two eagles are very limited, and they’ve all taken place in Alaska.

If you live in the United States then you’re definitely familiar with the most recognized eagles of North America, the Bald Eagle. It’s been the country’s national emblem since 1782 and a symbol in the folklore and story-telling of indigenous people long before then.

Though they’re called “bald” eagles, these birds aren’t actually missing feathers on their heads. However, their heads are covered in stark white plumage, which boldly stands out from the rest of their deep chocolate covered bodies. The rest of Bald Eagles are colorful too, with their bills and talons being bright yellow. They’re also one of the largest birds in North America, with heavy bodies, a long, curved bill, and massive, broad wings.

Although the appearance of this bird is iconic and regal, it’s behavior is another story — Bald Eagles are known for their preference to scavenge carrion or steal food from other animals rather than hunt for their own. They use their intimidating size to harass smaller birds for their meals, often targeting ospreys. A Bald Eagle will go after an osprey in midair, attacking the bird until it drops it’s prey, or just snatch it directly from osprey’s talons. Because of their thuggish behavior, Benjamin Franklin didn’t want the Bald Eagle to be the representation of the country, and instead favored the Wild Turkey.

There are a few pockets of North America where Bald Eagles are found; the southeastern and northwestern coasts of the United States, the upper portion of New England, and small central sections of the country.  However, in the cold winter months they’re found throughout the whole country. During breeding season, they reside further north and are found all across Canada.

Since their diet is primarily fish, the best places to look for these eagles are areas near bodies of water such as lakes, rivers, marshes, and coasts. They’re often spotted soaring just above the treetops with slow, strong wingbeats, or perched on a branch.

Golden Eagles are about the same size as Bald Eagles, with broad wings and long tails that fan out in flight. Their plumage is dark brown throughout, with golden highlights on the back of the head and neck. These eagles were also an important symbol in indigenous culture, representing courage and strength.

Unlike Bald Eagles, Golden Eagles behave more like predators, and will hunt for prey more actively, rather than rely on scavenging or stealing from other birds. To hunt, they often perch up high or soar, looking for small mammals. Although the size of their prey is mostly that of ground squirrels, jack rabbits, and prairie-dogs, Golden Eagles are capable of taking down much larger prey such as young prong horns and deer. These eagles are opportunistic though, and won’t turn their nose up at other food sources like fish, reptiles, and even other birds.

Like many birds of prey, Golden Eagles prefer open country or at least partially open areas. Look for them along hills, cliffs, and mountains. However, they adapt to make use of a diverse range of habitats, including deserts, tundras, and all kinds of woodlands and forests, especially those near water.

Though primarily a bird of Europe and Asia, rare appearances of the White-tailed Eagle have occurred in North America, on the western shore of Alaska. They’re native to Europe, southwestern Greenland, the Middle East, Russia, and the coasts of China.

Where the Bald Eagle has bright white feathers covering it’s head and a chocolate covered body, the White-tailed Eagle sports a wedge-shaped tail of snow-white feathers, with dark brown plumage everywhere else. Their heads may appear more pale than the rest of their body, and they have long, yellow bills as well. White-tailed Eagles are massive birds — the largest bird of prey in the UK, with wings even broader than Golden Eagles.

White-tailed Eagles aren’t picky eaters. Though they primarily eat fish, they’ll also take carrion, other birds, and small mammals like hares and other rodents. Like Bald Eagles, they’ll sometimes take food from other birds and animals, such as otters. Their preference for fish is why they are sometimes referred to as “sea eagles,” and they’re often found near coasts and other bodies of water. When they fish, they fly low to the water and sometimes hover for a moment before snatching a fish from the surface.

Like the White-tailed Eagle, Steller’s Sea Eagles are not native to North America, but have appeared in Alaska on rare occasions. They’re believe to breed in eastern Russia, along the coasts of the Bering Sea, but in the winter they migrate to Japan, where they are revered.

They have white tails and dark brown bodies, like White-tailed Eagles, but also have white patches on their bellies and shoulders. Young eagles may often be confused for White-tailed Eagles, but key differences include larger Steller’s Sea Eagles’ larger bills, wedge-shaped tails, and unique wing shape — narrow at the tip and near the body, and bulging in the middle. Steller’s Sea Eagles are very large overall, outweighing Bald Eagles. They are the largest among all the sea eagles.

These eagles rely on large bodies of open water for their main prey, fish. They primarily eat salmon, and their nests are often found close to areas where salmon spawn. They either perch and wait for prey, swooping down to snatch it with their talons, or stand in shallow water and grab fish as they pass. Like other eagles, Steller’s Sea Eagles will also steal meals from other animals and birds.