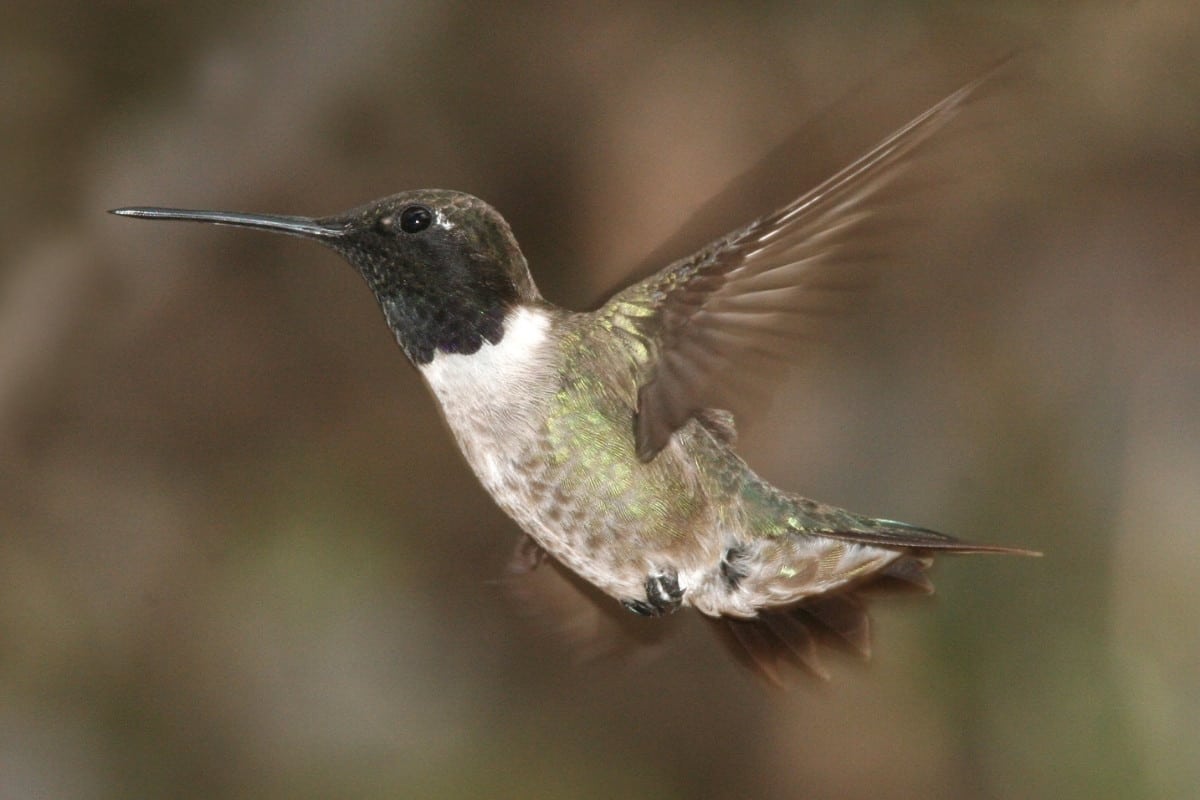 Most hummingbird species in North America reside in the western half of the continent and this includes the Black-chinned Hummingbird. This hummingbird resides in the southwestern United States, north into the Rockies and west to the coast of California.

Two populations live on either side of the Sierra Nevada Mountains– one in central and southern California, and the other in the Rocky Mountains and Southwest, as far north as eastern Washington and as far south as Texas.

Populations migrate between the United States and the southwestern coast of Mexico.

2. They are easy to attract to bird feeders.

Black-chinned hummingbirds adapt easily to human development or environmental disturbance. They are sure to be wherever people put out hummingbird feeders or where nectar-producing flowers grow.

Encourage a Black-chinned Hummingbird to visit your feeder much like you would any hummingbird. Fill a hummingbird feeder reservoir with 4 parts water and 1 part white table sugar. Do not use any other kind of sugar. Mix until dissolved and hang up your feeder.

If you have the option, try to hang the feeder adjacent to flowering plants that hummingbirds already visit. They will notice the feeder more quickly.

3. Spot them on exposed perches.

Because of their mostly-nondescript feathers, Black-chinned Hummingbirds can be difficult to spot. Sometimes birdwatchers will hear the rapid beating of their wings before they spot the quick-moving bird.

But every bird has to take a break, and Black-chinned Hummingbirds are no exception to that rule. Males prefer to rest on exposed perches in areas where they can survey their territory. An exposed perch could be a branch near a feeder or at the top of a tree.

Black-chinned Hummingbirds are a sexually dimorphic species, meaning that males and females look different. Females are a little larger than males. Scientists believe that females are bigger because she needs to accumulate more nutrients and vitamins to use when developing her eggs. By being larger, she has the bone structure and muscle mass to support her need to eat more and thus store more energy.

Both have green upper parts and grayish underparts. Where females have a green head with a white throat, males have a dark head and throat, rimmed with a band of dark purple feathers. It can be hard to see the purple depending on the light, so their whole head often appears black.

5. Black-chinned Hummingbirds have no problem with human development.

Their ability to adapt to suburban development in the western United States has helped their populations remain stable when other species of birds suffer. However, that doesn’t mean that they can’t grow vulnerable.

If you want to support the hummingbird population in your area, plant native nectar-producing flowers in your yard. City councils in some towns in the United States have even worked to customize municipal plantings in parking lots and public parks to be hospitable to native birds.

It may seem trivial to pick one plant over another, but to the hummingbirds, it makes a world of difference. Stewarding the resources that we have now will preserve them for future generations – of people and hummingbirds alike.

6. They can live to be over a decade old.

With the amount of energy a hummingbird expends each day, you’d think that they only live for a year or two, right? Wrong!

The oldest wild-captured hummingbird was found in Texas in 2008. According to banding data, it was about 11 years old. Predators are everywhere, but this female had managed to evade them for over a decade.

Females probably live longer than males since they stay hidden more often and don’t engage in fights for territory or breeding options.

7. They eat both insects and nectar.

Most people believe that hummingbirds subsist totally on the sugary nectar of plants. However, that couldn’t be farther from the truth. Adult Black-chinned hummingbirds chase after and eat insects like small flies and spiders. Parents bring back insects to their nestlings to give them a quality source of protein.

8. Red may not be their favorite color

Many hummingbirds seem very attracted to the color red. This is why you will see most hummingbird feeders with this color, and some pre-made food may contain red dye.

However studies show that the Black-chinned Hummingbirds may be more interested in whatever color they associate with last place they found a good meal. If an area they recently visited was full of nectar producing flowers, they will temporarily be on the lookout more for the color of those flowers than others.

They make a migration of up to 2,000 miles every year despite their small size. Populations migrate from the United States to the west coast of Mexico, where they spend the winter.

Scientists believe that some winter in the Gulf of Mexico, but that has yet to be proven definitively.

If you live in this hummingbird’s migration flight path, a great thing you can do is put out nectar. The birds will definitely need to refuel before flying the next leg of their trip.

10. They have specialized tongues

The Black-chinned Hummingbird has two grooves on its tongue. When it sticks in tongue into nectar, the nectar will automatically move into the grooves via capillary action. They can then retract their tongue and squeeze the nectar from the grooves into their mouth.

This actions happens very quickly, at about 13-17 “licks” per second. During cold weather they drink more to make up for the energy they use to stay warm, about three times their body weight in nectar per day.