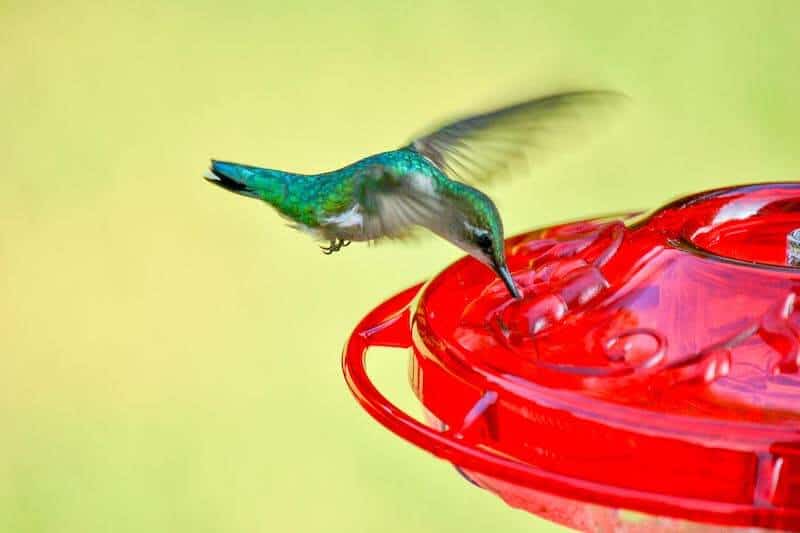 Ruby-throated hummingbirds are very fast flyers and have the ability to zip from flower to flower at high speeds. These hummingbirds are capable of beating their wings as much as 50 times per second.

The name of the Ruby-throated hummingbird stems from the appearance of the male. Males of the species have a bright red throat, while females have white colored throats.

Ruby-throated hummingbirds are easily recognizable by their shiny feathers that have a reflective, iridescent sheen, especially in sunlight. Their head, back and tail are covered in shiny emerald green feathers. Because of this iridescence, in certain light both their green body feathers or red throat feathers may appear black.

4. Ruby-throated hummingbirds don’t sing, but they do make sounds

Although you won’t see them sitting on a branch and singing like your backyard songbirds, they do make sounds. Their calls sound like high pitched squeaks. You will often hear many of these squeaks and squeals as they chase each other.

Not all hummingbirds are comfortable visiting backyards, but ruby’s seem right at home. If you have a garden or your backyard has many flowers, these hummingbirds will be frequent visitors. They will also happily approach hummingbird feeders for food.

When constructing the small cup-shaped nest out of plant materials and spider silk, the mother hummingbird keeps it pliable. She will stomp down the base, but leave the walls of the nest slightly flexible. This will allow the nest to stretch as the baby hummingbirds grow.

Once fall approaches, Ruby-throated hummingbirds begin to migrate south to lower Mexico and Central America where they will spend the winter. At the start of spring, they make their way back up north to the United States and Canada to prepare for breeding season. Many people eagerly await their return, which begins in southern states as early as March and April.

9. During migration ruby-throated hummingbirds can travel 500 miles at a time.

Many Ruby-throated hummingbirds choose to travel across the Gulf of Mexico during their migration. They can make this flight of about 500 miles in less than a day without stopping.

10. Ruby-throated Hummingbirds Use Their Tongue to Drink Nectar Rapidly

A hummingbird tongue is approximately the same length as their beak. When Ruby-throated hummingbirds stick their beak down into flowers, they are using their long tongues to reach the nectar that sits at the bottom.

Female Ruby-throated hummingbirds will use the silk from spider webs to keep the nest together. Once the nest is complete, leaves and lichen are used to camouflage the nest from potential predators. Leaving spiderwebs in your yard can actually help hummingbirds by providing material for their nests! 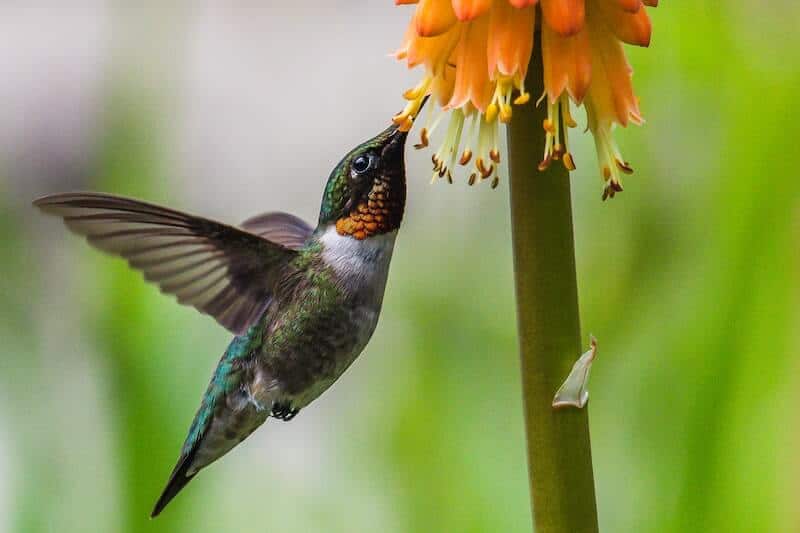 Pollen is very important for flower reproduction. Similar to bees, hummingbirds are excellent pollinators. As the hummingbird travels from flower to flower to feed on nectar, they pick up pollen with their feathers in the process. By moving flower to flower, they transport this pollen and can pollinate hundreds of flowers a day.

Female Ruby-throated hummingbirds typically have one to two broods each year. If a female has a second brood, she will often begin building a second nest to lay another clutch of eggs while she is still feeding nestlings from the previous brood. No time to waste when making sure they can raise their young to independence before it is time to migrate in the early fall.

16. Ruby-throated Hummingbirds Are Protected by the Migratory Bird Treaty Act

In 1918, the Migratory Bird Treaty Act was established to protect migratory bird species. The act applies to all migratory bird species that are native to the United States and its territories. This prohibits the capture, selling, trade, transport, or killing of the Ruby-throated hummingbird, which is enforced by the Department of Interior U.S. Fish and Wildlife Service.

17. Males don’t pair up with females for very long

Males spend a lot of time on their own, defending their territory and favorite feeding spots. They only pair up with females during courtship and mating, which lasts for just a few days or a few weeks. After mating they are off on their own again, leaving the female to nest, incubate the eggs and raise the young all on her own.

Much of the adult Ruby-throated hummingbird diet consists of not only nectar, but also small insects. Mosquitos, gnats and fruit flies are some of the insects on the menu. Insects are also fed to baby hummingbirds. The protein and vitamins they provide help young hummingbirds grow quickly.

Ruby-throated Hummingbird eggs are only about 0.5 inches (1.2 cm) in length and 0.3 inches (0.8 cm) wide. Their eggs are all white and only weigh about half a gram.

During the courtship process, males will perform a special dive for females that enter their area. They will fly up above the female, sometimes as high as 50 feet, then dive down and back up in a large U-shape. They will perform several U-shaped dives as the females watch. If she seems interested, he may fly up close to her and flit from side to side while displaying his red throat.

The legs of the ruby-throated hummingbird are so short that they can’t walk or hop around. When not in flight, they can use their strong feet to grip branches and sit perched.