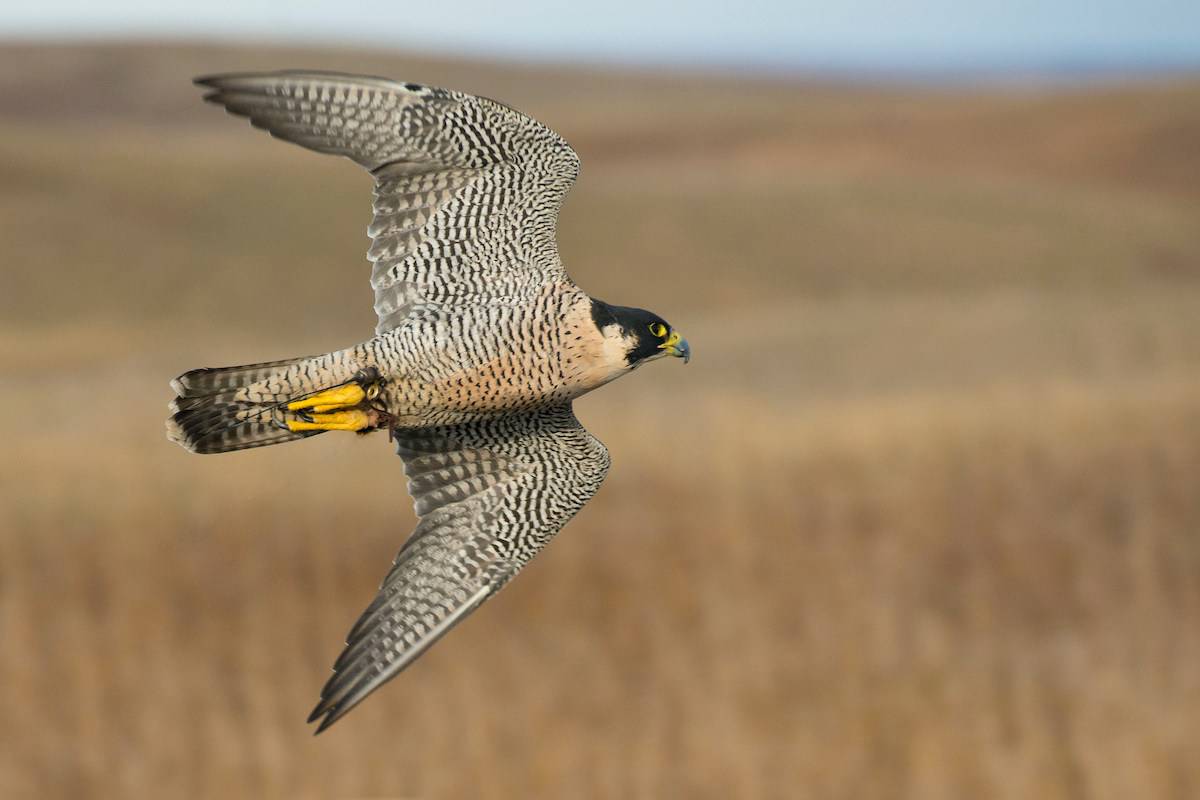 TheFalcons are birds of prey, but separate from eagles, kites, and hawks. Unlike these other raptors, falcons kill their prey with their beaks rather than their talons. They are also usually faster, and have longer and more slender wings compared to hawks. There are 7 species of falcons that regularly visit the United States, but in this article we will look at the 6 species of falcons in New Mexico.

The 6 species of falcons you may be able to see in New Mexico are the American Kestrel, Merlin, Aplomado Falcon, Crested Caracara, Peregrine Falcon and Prairie Falcon.

There aren’t many other states where you have the possibility of seeing 6 out of the 7 U.S. native falcons! Let’s take a look at each one.

The American Kestrel can be found throughout New Mexico year-round.

Merlins are another small falcon found in New Mexico. However you’ll only find them during the fall and winter. As spring approaches, they head north to their breeding grounds in Canada. 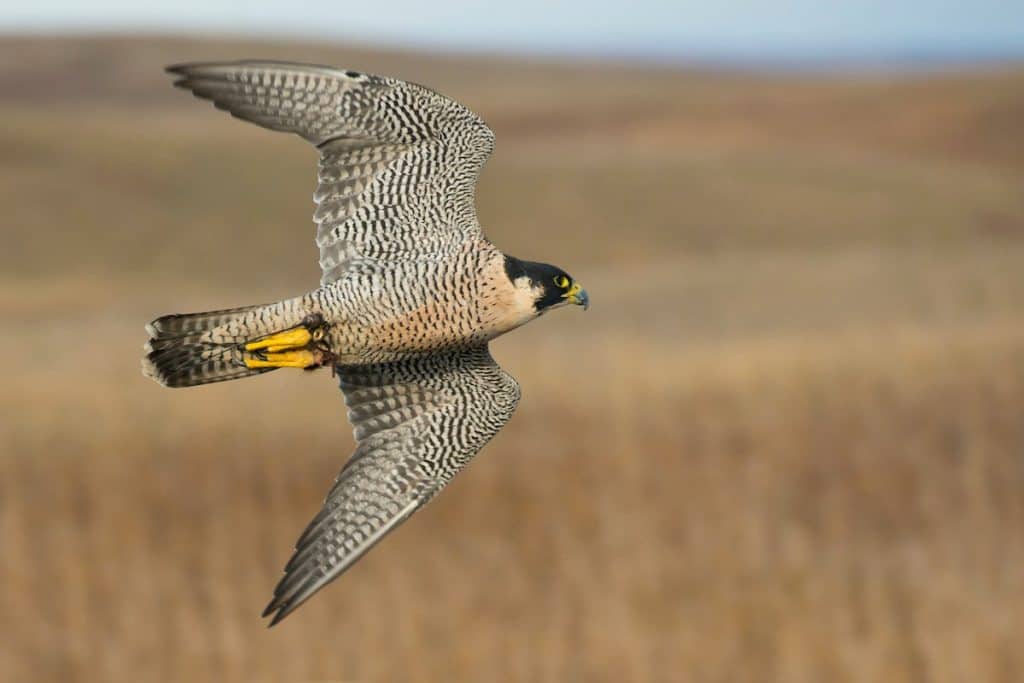 Peregrine Falcons pass through New Mexico during migration periods, so look for them in spring and fall. In the northwest corner and southwest corner, they may stay year-round.

In the United States, the Aplomado Falcon is only found in Texas and New Mexico. In these states they are still uncommon and have a sparse year-round population in just a few areas near the Mexico border. Their range extends down from Mexico all the way to Argentina.

In New Mexico most of the sightings I could find registered online were in the far southwestern corner, near towns like Dona Ana and Luna.

In many cases, they resemble a larger American Kestrel. They have rusty red on their belly that sometimes extends up to the chest, or sometimes the chest is white. Their under-feathers are dark with white barring, and this pattern extends to their sides. Their black and white face makes the yellow base of their bill and yellow eye-ring stand out. Although, in some birds their rusty coloring replaces the white on their face.

Their preferred habitat is grasslands along the coast and desert regions with yucca and mesquite. They will hunt insects in the air, and also prey on lizards, small mammals and birds. Interestingly, they have been seen chasing prey on foot.

Aplomados are not only rare in the United States, but also on the endangered species list in both the U.S. and Mexico. However, there are currently efforts to reintroduce them to Southern Texas and the United States that you can learn more about here.

The prairie falcon prefers wide open spaces like grasslands and fields where they soar high overhead looking for their next meal which is usually small mammals or other birds. They are found throughout much of the the western half of the U.S. year-round, including New Mexico. Some may move slightly east to the middle of the country for the winter months. 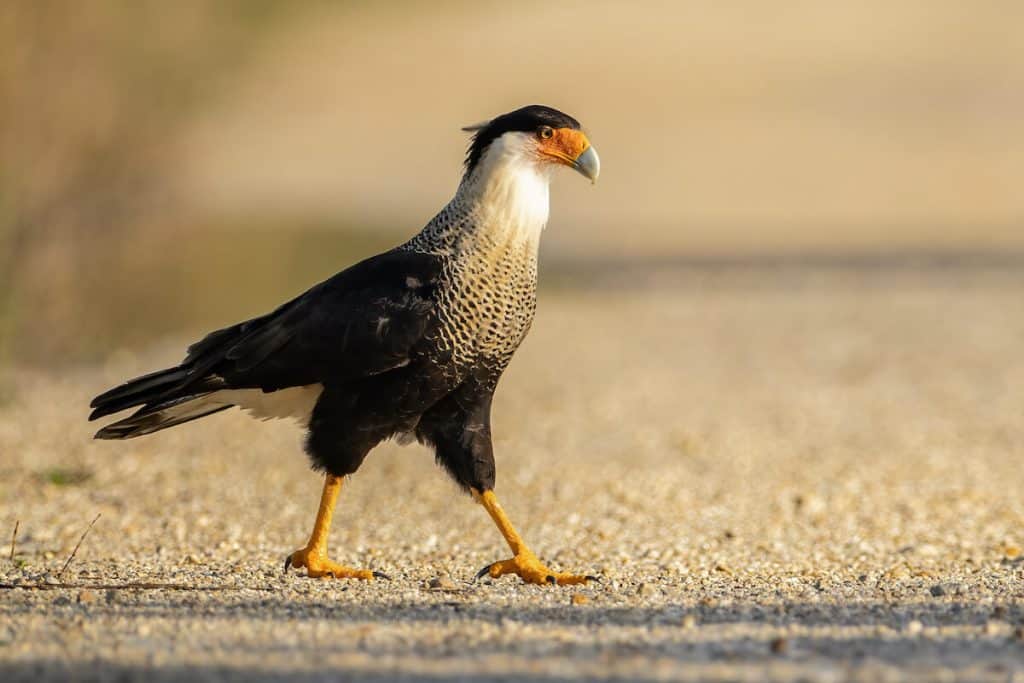 The Crested Caracara looks unlike any of the other species of falcon. In fact, the Cornell Lab describes them as a bird that “looks like a hawk…behaves like a vulture, and is technically a large tropical black-and-white falcon.” They are most common in Central America but are found in a few spotty areas of the Southern United States. More common in neighboring Arizona and Texas, they are still occasionally spotted in New Mexico, typically the southern half of the state.