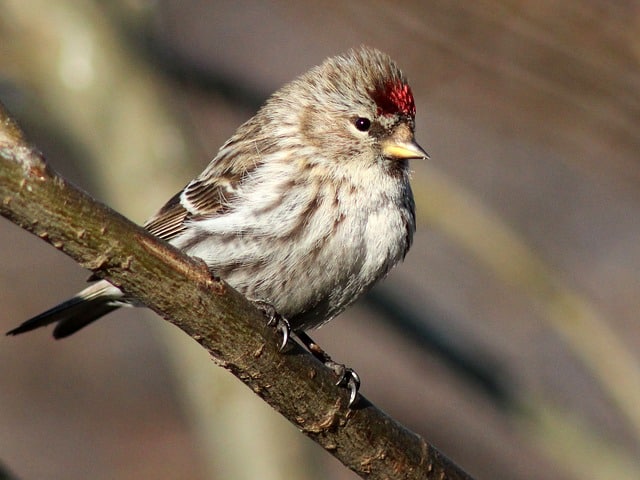 Finches are small songbirds that come in a huge range of colors and bill sizes. You probably recognize them as the famous subjects Charles Darwin studied during his exploration of the Galapagos Islands. The finches of Michigan may not be quite the same as those found in the Galapagos, but there are still plenty of unique species that are just as interesting. Read on to learn all about the 10 species of finches the state has to offer.

The 10 Species of Finches in Michigan

Michigan has a diverse selection of finch species. They include; House Finches, American Goldfinches, Evening Grosbeaks, Pine Siskins, Purple Finches, Common Redpolls, Red Crossbills, White-winged Crossbills, Hoary Redpolls, and Pine Grosbeaks. Many of these birds are considered birds of the far north. Michigan’s location along the Canadian boarder puts it in a unique spot to be visited by these mainly Canadian species.

House Finches are common birds found year-round across most of the United States, including Michigan. Though they’re native to the dry deserts of the southwest, these finches are highly adaptable and are now found in many human-occupied territories such as suburbs, parks, and cities.

According to Audubon, the eastern spread of this bird is traced back to New York pet shop owners in the 1940’s. They were selling the birds illegally and released them into the wild in order to avoid getting caught. Of course, the birds thrived, and are now abundant throughout the country.

House Finches are probably a familiar sight. They have small bodies and relatively large beaks, with short wings and longer tails. Females are mostly a dull brown with pale-colored streaks, but males have red coloration on their faces all the way down their chests. They’re active feeders and are easily noticeable foraging at backyard feeders, on the ground, or in bushes and trees.

American Goldfinches are year-round finches in Michigan. They are common birds and widespread throughout most of the country. They’re also very likely to visit back yard feeders, and aren’t very picky when it comes to seed selection — though sunflower and nyjer seeds are popular menu items.

Only adult breeding males boast the cheery, bright yellow plumage that earns them their name. During the spring and early summer their distinct yellow bodies with bold, black patches on the head and wings are a favorite sight amongst birders. However, this color fades to dull olive in the winter. Many times people don’t recognize them as the same bird!

American Goldfinches have long wings and a short, notched tail. Their bills are solid cones that come to a sharp point — perfect tools for foraging seeds. These birds are eager in their pursuit for food, actively climbing to reach the seeds of weeds and trees.

These regal-looking finches reside year-round at the very tip of the state that lies between Lake Huron and Lake Michigan — though in the majority of the state they’re only found outside of the breeding season.

Unfortunately, sightings of evening grosbeaks are becoming more uncommon, especially in the eastern portion of the United States. Though, they migrate south during the winter in such irregular numbers, that sometimes there may be quite a lot of them, often taking advantage of backyard feeders.

Evening Grosbeaks are unique types of finches with blocky heads and strong, thick beaks. Their bodies are also stocky, with thick necks and short tails. Male evening grosbeaks feature a bold coloration of mostly yellow, with black edged wings that have a bright patch of white in the center. The distinct, canary-yellow eyebrow stripe on their otherwise dark heads gives the a distinguished expression.

Pine Siskins are petite finches, slightly smaller than american goldfinches. They have sharp, pointed bills that are slender for finches. They’re mostly covered in streaky brown plumage, but have yellow markings on their wings and tails. In flight, their notched tails are clearly visible as well as their pointed wings.

Like evening grosbeaks, pine siskins are found year-round only at the very northern tip of Michigan, but during the winter they are found throughout the rest of the state. As their name implies, pine siskins prefer coniferous forests, but will also appear in mixed forests of both evergreens and deciduous trees.

The majority of a pine siskin’s diet consists of seed and plant matter, and they are active foragers in trees, weeds, scrubs, and bushes. They also eat out of feeders — thistle feeders seem to be their favorite choice, but they’ll also accept other small seeds.

Purple Finches are found year-round in a larger northern range of Michigan than pine siskins or evening grosbeaks. Like these other finches, purple finches are also found throughout the rest of the state during the non-breeding season in winter.

It’s often difficult trying to differentiate between a purple finch and a house finch as males from both species are around the same size and they share reddish colorations. Females from both species are similar as well, and mostly brown with streaking. However, purple finches tend to have color on a larger portion of their body and the hue is more of a purple-red than the true red of house finches. Purple finches also have a bulkier body in addition to a larger beak.

Like most finches, purple finches are foragers and are often high up in the trees looking for seeds. They are mainly found in coniferous forests during breeding season, but extend their habitats to lots of other forests in the winter. Purple Finches also readily visit backyard feeders stocked with black oil sunflower seeds.

Common Redpolls aren’t so common in the United States, these little birds are only found during the winter in Michigan. However, they’re very widespread and numerous in Canada and the Arctic where they nest. When they migrate south they do so erratically, making them hard to predict. Sometimes they’ll end up far south of their winter range in large numbers.

Common Redpolls are energetic and active when it comes to foraging. They flutter from place to place and climb branches and stems to get at seeds. To make them even more adept at collecting food, they have a pouch on the inside of their throat that allows them to store food for extended periods of time.

These are small finches with small heads and tiny, pointed beaks. They’re mostly brown and white with lots of streaking. Male common redpolls have red markings on their chests, but both males and females have a red patch on their foreheads.

Red Crossbills definitely stand out from other finches — they have odd, criss-crossed breaks that are a special adaptation for breaking into conifer cones. For this reason, they’re usually never found outside of coniferous forests. They rely on the seeds of trees such as spruces, pines, hemlock, and Douglas-firs.

The amount of seeds available from conifers varies greatly from season to season, so the migration of these birds is largely unpredictable. These nomadic birds flock to wherever there is food, resulting in regular irruptive migrations where red crossbills are spotted far outside their normal range. While there may be scarce populations of these finches at the northern tip of Michigan, they’re mostly found during the winter.

White-Winged Crossbills have the same twisted beak as red crossbills. Like the red crossbills they’re also wanderers when it comes to migration. They’re only found in Michigan during the winter, but even so their appearances are hard to predict. When they do migrate it’s in irruptions and all depends on how abundant coniferous cones are.

White-winged Crossbills are medium-sized finches. While adult males show a rosy-red color on their heads and chests, with jet-black wings — females are mostly a brownish yellow. They like to stick together in flocks and if they find an area rich with spruce and other coniferous seeds, they may all settle for a while to nest, regardless of if it’s breeding season or not.

Hoary Redpolls may be common and widespread in the Arctic tundra where they nest, but they only appear in Michigan during irruptive winter migrations. They’re closely related to common redpolls but are less likely to be spotted.

As a bird of the snowy north, it’s no wonder the hoary redpoll is covered in white feathers. Their bellies are nearly completely white minus the occasional blush-red patches on their chests. They have more vibrant red patches on their foreheads as well as gray-brown streaks on their uppers and wings. Their mostly-white chest with no streaking is the best way to tell them apart from a common redpoll.

Pine Grosbeaks are one of the largest of the “true finches”, with an average size of 8-10 inches in length. Adult males are a reddish-pink overall with gray wings and white wingbars. Females and juveniles are an olive-yellow color. As their name suggests, you will find pine grosbeaks in open evergreen forests. The majority of their diet consists of the buds, seeds and fruits from juniper, birch, spruce, pine and mountain ash trees. They are known to sometimes visit backyard feeders that contain sunflower seeds.

Most of the pine grosbeaks can be found in Canada, with only small pockets in the U.S. In Michigan they are mainly spotted along the far northern boarders, especially in pockets of evergreens along the lakeshore. However during years where the boreal trees in Canada produce a smaller crop of seeds, they may travel further south than usual looking for food.