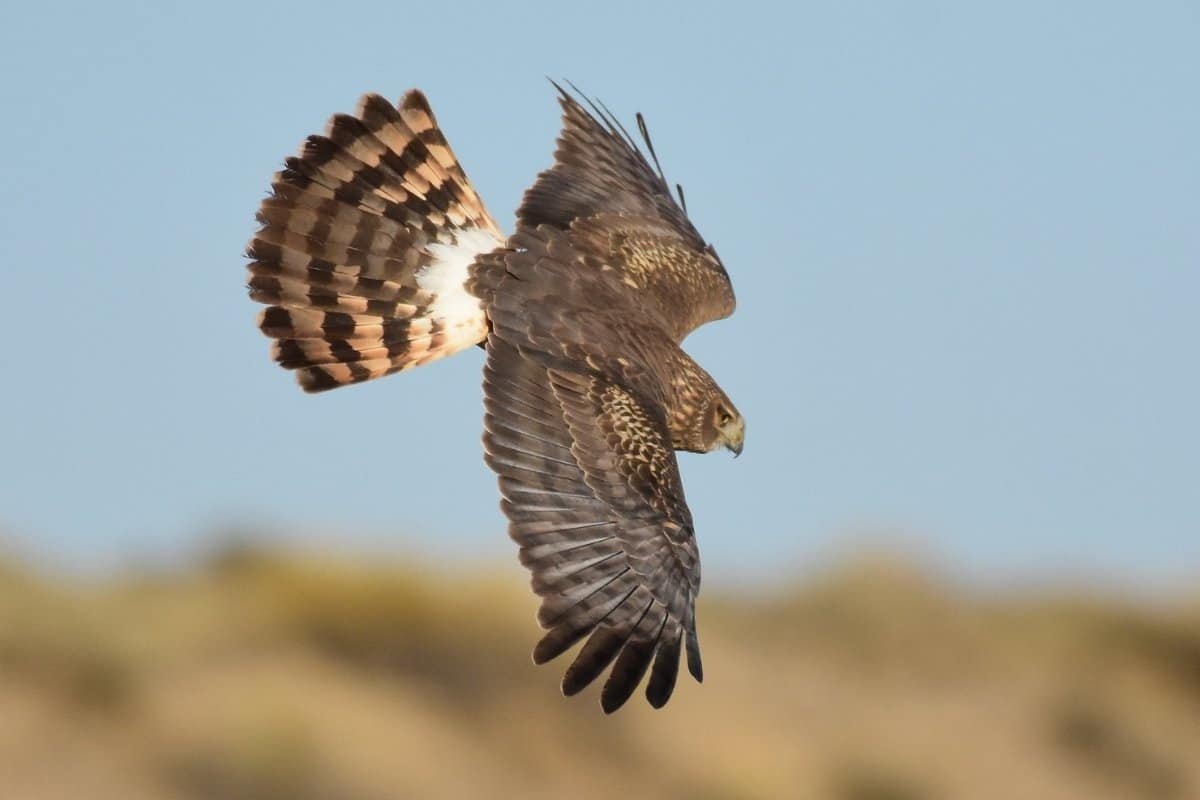 The beautiful Hawaiian islands are known for all sorts of exotic and unique flora and fauna. But its remote, isolated location means some groups of animals have evolved to fill very specific niches, while other groups of animals are entirely absent. When it comes to hawks in Hawaii, there are only two species seen on a regular basis.

While there may be other species of hawk that rarely find themselves off-course and visit Hawaii, there are really only two species currently that can be found there on a regular basis. One is native to the islands, while the other is a vagrant.

Other birds of prey that may be mistaken for hawks in Hawaii are the peregrine falcon and the osprey. While both are birds of prey, and the osprey is sometimes referred to as a “fish hawk”, neither are true members of the hawk family.

The northern harrier is mainly a bird of North America, commonly found from Mexico all the way up to northern Canada and Alaska. However they have been seen in Hawaii several times and are considered vagrants. In this case, a vagrant means a bird that has been found way outside of its normal range. So while they don’t have a large population on the islands, they are known as a possible hawk you could spot there.

James Campbell National Wildlife Refuge on Oahu is one location they have been spotted multiple times. A few other sightings have been recorded on eBird on the Big Island (along Saddle Road, in the Waiki’i Ranch area) and the southeastern corner of Maui.

The northern harrier has an elegant, almost owl-like face. This disc-shaped face functions similarly to an owls, directing sound into their ears to help them hunt by sound as well as sight. Two helpful identifying features are their long tail, and white patch above the tail. They have a signature flying style, holding their wings in the shape of a “V”.

There is only one hawk native to the Hawaiian islands, the Hawaiian hawk. Their native name is ‘Io. Today, this hawk can only be found on the Big Island, however there is fossil evidence that suggests at one time they were found on many of the islands.

They can have quite a wide range of color variation. In general there are two color morphs, light and dark. The dark morph is a dark brown pretty much all over. The light morph has a dark brown head, back and wings, but a light chest and belly. However the light morph can also have a fully white head, or a “golden” head that is light with a pale orange hue.

These hawks tend to perch and look for prey. It is believed that historically, before the arrival of the Polynesians to the islands, these hawks hunted for ducks and rails because Hawaii did not have many of its own native mammals. But with increased human traffic to the island, many animals have been introduced that the hawk now hunts, including rats, mongoose, insects, lizards and game birds.

Nesting season for the Hawaiian hawk is March to September, and they are known to be very vocal during this time with the “eeeh-oh” call. Nests are built by both sexes, and can take up to two months to construct. The female will do the majority egg incubation, usually for 1-3 eggs at a time, for about 5 weeks. It take the chicks about 7-8 weeks before they are ready to leave the nest, and during this time the male will visit to deliver food. The young hawks will remain dependent on their parents for up to nine months.

They were considered an endangered species, however were taken off the list in 2020. However they are still officially considered a “near threatened” species, meaning they are vulnerable to endangerment. The ‘Io has many threats to face, including loss and degradation of forest habitat.

The Iolani Palace in Honolulu, built by King Kalakaua in 1882, is named after this hawk, with ‘iolani meaning “exalted hawk”. Below is a great video taken by a Hawaiian local, showing both the light morph and dark morph spotted at his home on the Big Island.

Related Articles You May  Enjoy: