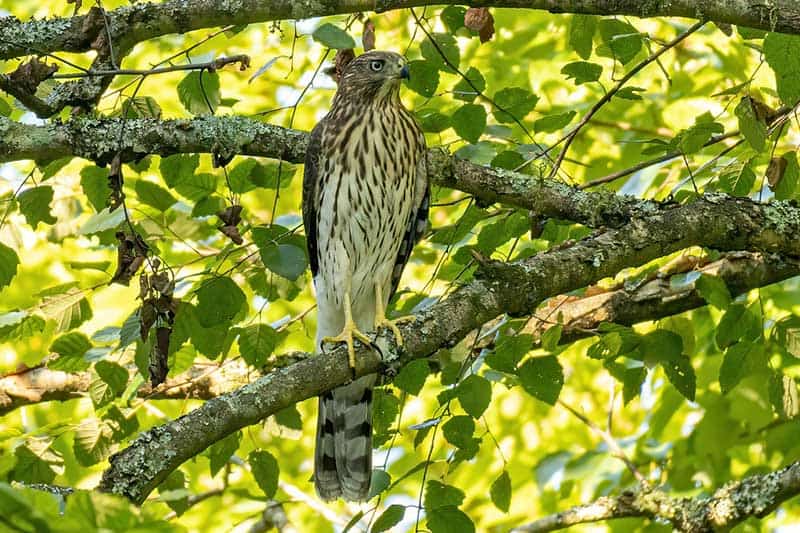 Hawks have a keen eyesight and make brilliant hunters, and are highly intelligent. They are also considered one of the most intelligent of the bird species. There are at least 16 species of hawks living across the United States. But in this article, we’re going to discuss the 9 species of hawks found in Iowa. Iowa dedicates a great deal of time and care to wildlife conservation and rehabilitation efforts, keeping these magnificent creatures and other wildlife safe and thriving. This makes Iowa an excellent place for hawks and raptors of all kinds to live.

Let’s get to it and have a look at these birds of prey in Iowa!

9 species of hawks of Iowa

Below we’ll go over each hawk found in Iowa.

Red-tailed Hawks are the most common hawk found on the North American continent, living year-round in almost every state. Red-tails are so common, the chances of being the first hawk you come across are remarkably high. You can find them soaring in circles above open fields or atop barns, fence posts, and telephone poles along the open road.

Red-tailed Hawks live year-round in Iowa. Red-tailed Hawks are one of the largest hawks in Iowa as well as North America. They aren’t as common in your backyard as some of the other hawks on this list, but you may still see one passing through. They go after mammals and typically don’t bother birds stopping at a local feeder.

You can find the Harrier in Iowa during the non-breeding season and in some parts year-round. You’re likely to see them over marshes, fields, and other wide-open areas.

Sharp-shinned Hawks are the smallest hawk in the United States. These hawks prey on small birds and rodents. They use their long toes and talons to puncture the main arteries in their prey. They will pluck their catches feathers before eating.

Sharp-shinned hawks live in Iowa in some areas year-round and during non-breeding season. You can spot them in open spaces, with their flap and glide flight pattern. They won’t be easy to spot. You will be more likely to spot these guys during migration.

Cooper’s hawks are magnificent creatures, among the most skilled of fliers, but deadly. They are a bird feeders’ or rehabilitators’ worst nightmare, for they stay close to prey on Starlings, Mourning Doves, and Pigeons. Racing through forestation to catch birds has its downfalls. These raptors have their fair share of injuries.

Cooper’s Hawks can be found in most of North America and can be found in Iowa all year long. However, because of their stealth, these birds are not always the easiest to see. Watch out for their long tails and flap-flap-glide style to spot these birds.

Goshawks are mostly gray with white stripes over their eyes. They are fierce and will protect their nest at all costs. It’s not surprising Attila the Hun wore the shape of this hawk on his helmet.

Northern Goshawks can be found in Iowa during the non-breeding season. You’ll have a better chance of seeing them, however, closer to the northern border. These hawks won’t make it easy for you. Northern Goshawks prefer to live in dense forests. They have been known to attack humans who get too close to their nests. So when searching for these raptors be careful. You’ll need to be very patient to catch a glimpse of these magnificent warriors.

Red-shouldered Hawks are beautiful and have a very distinctive coloration. Fitting to their name, they have a reddish underbelly and wings and a banded tail that stands out.

Red-shouldered Hawks can be found on the eastern border of Iowa. If you hope to catch a glimpse of these beautiful raptors, learn their distinctive whistle and look for them around/in wet forests. In spring, they may be seen circling high above their nesting area.

These Hawks will nest in the same location year after year after year, so if you spot their nesting area, you’ll be sure to spot them every year you look.

Broad-winged hawks like to be in a secluded area during breeding season. They will nest in forests and bodies of water far from humans. These Hawks eat small mammals, insects, and amphibians such as frogs and toads.

Broad-winged Hawks can be found in Iowa during the breeding season and on the western border during migration.

If you are hoping to see these beautiful Raptors, your best bet is during migration, where their flocks can contain thousands of birds. If you are not in their migration line, you can catch sight of them in forests. Just listen for their piercing whistles.

Swainson’s Hawk can be found in the north-western border of Iowa during breeding season. You are likely to find them during the summer, over large areas of open country. They’ll perch on telephone poles, wires, and secluded trees.

Rough-Legged Hawks can be seen all across Iowa during their non-breeding season. You’ll most likely be able to view these wondrous creatures during the winter. They love the cold, breeding in the arctic. You’ll find them in the states in wide-open spaces, perching on poles and fence posts.

Rough-legged hawks get their names from the feathers on their legs. Very few American Raptors have feathers that run all the way down their legs. The oldest hawk on record of this species was an almost 18 years old female found in Illinois.