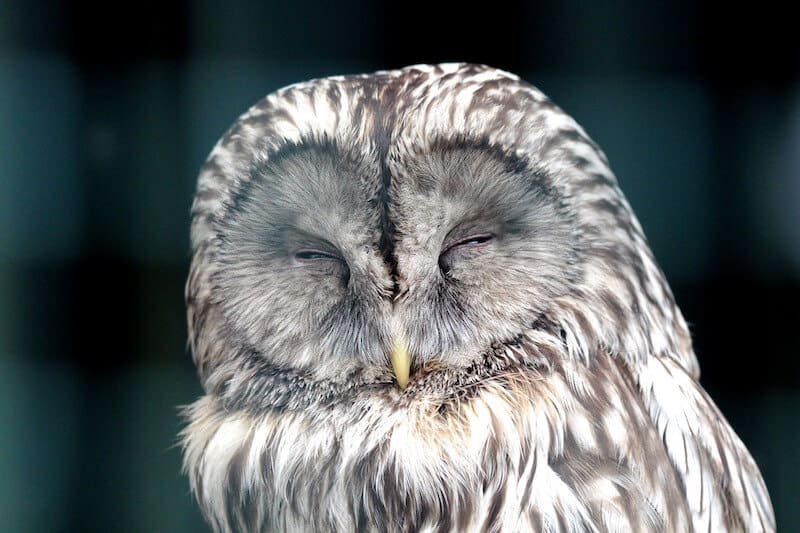 For most people, owls remain mysterious birds because of their mostly nocturnal activity. They are well camouflaged and nearly silent, making them hard to observe even for the more dedicated bird watchers. If they are up all night you may wonder, how do owls sleep? In this article we will take a look at owls sleeping habits and answer some frequently asked questions.

How Do Owls Sleep?

Owls can sleep upright and perched on a branch by just closing their eyes. They will fix their talons onto branches and have a firm grip before falling asleep. Their back toes, called the hallux, won’t open up until they bend or stretch their legs.

Many birds rest their head on their back when sleeping, nuzzling their beak and face into their back feathers. However due to their different neck structure, owls can’t do this and simply close their eyes. Sometimes owls will sleep with their heads turned backward, although most sleep facing forward.

How long do owls sleep?

Like most birds, owls need around 12 hours of sleep to conserve and maintain their energy for their food foraging and mating activities. These birds can fall asleep quickly, even within 11 seconds.

Although they are birds of prey, owls have many of their own predators such as foxes, eagles, and wildcats. This means they have to be semi-alert even while they sleep and often take a series of short naps.

Where do owls sleep?

Most owls will sleep on tree branches at the interior of the tree, or in tree cavities. They tend to find nesting or sleeping places with low activity and noise, and where predators or people are unlikely to disturb them.

Besides trees, you may also see owls sleeping on cliff ledges or in deserted buildings. They also commonly rest near good areas for hunting so they can search for prey as soon as they wake up.

Although most owls roost alone or near their nest during the breeding season, some species roost communally or share resting areas. For example, the long-eared owl will rest in groups of 2 to 20 owls.

Some owl species, such as the snowy owl and short-eared owl will build nests on the ground. The great horned owl is one species known to build nests in abandoned squirrel nests.

Do owls actually sleep during the day?

Yes, most owls are nocturnal and will sleep during the day and hunt at night. Their main food sources are lizards, frogs, snakes, fish, rabbits, birds, mice, and squirrels.

Strictly nocturnal species include the barn owl and the great horned owl. However, some are diurnal, meaning they are active during the day and sleep at night. Some species also alternate between hunting during the day or night depending on food availability.

Owls that don’t sleep during the daytime and you might have much luck spotting during daylight hours are:

Do owls sleep face down?

While owls can sleep upright as adults, baby owls (or owlets) find this difficult because their heads are still too heavy for them to hold up. Instead, they lie on their stomach, turn their heads to one side, and sleep. If they are on a branch, they’ll grip the branches tightly with their talons before lying down on their stomachs.

Sometimes owlets will also sleep leaning against their siblings or the sides of the nest to support their heads. Once they grow, they gain stronger neck muscles and body endurance to handle their head weight and sleep upright. Sleeping owlets have multiple short naps and don’t like to be disturbed, even for feeding.

There is a good chance that they do! Researchers discovered that owls go through REM sleep, similar to humans. Rapid eye movement (REM) sleep is a sleep stage where we experience similar brain activity to being awake and the our most vivid dreams.

Birds are the only non-mammal species currently known to have REM sleep. Further, they discovered that REM sleep declined as the owlets aged, just as it does in human babies.

Do owls sleep with one eye open?

Owls are known to engage in unihemispheric slow-wave sleep, where half their brain is still alert while the other half rests. When in this state, the eye associated with the half of their brain that is still alert will stay open. This allows them to be alert to potential dangers even as they rest, and gives them an advantage at evading predators.

Interestingly, these birds can decide if they want both halves of their brains to sleep or one to stay awake and alternate sleeping with the other half. So, you won’t always see an owl sleeping with one eye open.

Most owls will sleep perched on a tree branch standing upright or nestled into holes in trees. However, owlets can’t hold their heads up in this way, so they typically sleep on their stomach and face to the side.

While many owl species sleep during the day, there are some you might see flying around finding food while the others rest.