Hummingbirds sleep at night just like we do, but they can also enter a deeper state called torpor. In torpor, hummingbirds drastically lower their body temperature and metabolism to conserve energy. This special adaptation allows hummingbirds to survive cold nights without using up all the energy reserves they gathered during the day. While hummingbirds typically sleep perched on a small branch or twig, during torpor they may be seen hanging upside down.

Yes, hummingbirds do sleep, even though they never seem to sit still! Hummingbirds are typically active from dawn till dark, spending as many daylight hours as they can eating. However they don’t have specialized eyesight that would allow them to easily find food after dark, so they spend the night sleeping rather than being active.

Hummingbirds don’t sleep for a set number of hours, but base their sleep on sunrise and sunset. They will generally sleep from dusk till dawn, which can range from 8 to 12 hours or more depending on season and location.

In fact if you swear you saw a hummingbird hovering and feeding at your flowers during the night, you were probably seeing a sphinx moth.

Hummingbirds usually sleep perched on a small branch or twig. If possible, they will choose a location that has some protection from wind and weather, such as in a shrub or tree. Their feet can maintain a firm grip even when sleeping, so they aren’t likely to fall off.

Hummingbirds have the ability to enter a normal sleep state like we do, or to enter a shallow or deep energy-saving state called torpor.

Do hummingbirds sleep upside down?

Yes, hummingbirds do sometimes sleep while hanging upside down. While their normal sleep position is to perch upright, if the perch is particularly smooth they may slip forwards or backwards and end up upside down.

While in the “deep sleep” of torpor, this movement will not wake them up.  But that’s okay because their feet are gripping so strongly that they won’t fall, and will continue to sleep hanging upside down.

If you see a hummingbird hanging upside down from your feeder, just let it be. It is most likely in torpor and will wake up on its own. If it falls to the ground, which is unlikely, you may want to move it to a safer spot.

Scientists aren’t yet sure why some hummingbirds choose to go into torpor while sitting at the feeder. It may be a strategy to have food available immediately upon awakening. This would ensure they start the morning with enough energy for the day.

While many people describe torpor as a state of deep sleep, it isn’t really sleep. Torpor is a state of inactivity marked by reduced metabolism and body temperature. Animals that are able to enter a torpid state do so to conserve energy. The most well known example of this is hibernation.

Hibernation is a type of torpor that takes place over long periods of time. Like a bear hibernating throughout the entire winter. Hummingbirds, however, don’t hibernate. They can go into torpor any day of the year, for just a single night at a time. This is called “daily torpor” or noctivation.

What happens to hummingbirds during torpor?

In comparison, if your body temperature fell by just 3°F degrees below the normal 98.5°F you would be considered hypothermic and require outside sources of heat to warm you back up.

To achieve this low body temperature, their metabolism decreases up to 95%. Their heartbeat slows from the normal flying rate of 1,000 – 1,200 beats per minute to as low as 50 beats per minute.

Why do hummingbirds go into torpor?

Hummingbirds have an extremely high metabolism, about 77 times higher than us humans. This is why they must eat constantly all day long. They have to consume 2-3 times their body weight in nectar and insects daily. Nectar has a lot of high-energy sugar calories, while insects provide additional fat and proteins.

Since they don’t feed at night, the overnight hours are a long period of time where they are not replacing the energy their metabolism is using. Their body has to rely on its energy reserves until the next morning when they can find food again. On a warm night, this is usually manageable.

However it gets cold after the sun goes down. To keep their body temperature up they will use even more energy than they do during the day. Hummingbirds don’t have a layer of insulating downy feathers that many other birds have, making it even harder for them to retain body heat. If it gets too cold they just won’t have enough energy to keep warm, and will basically starve to death using up all their reserves.

The solution is torpor! Their ability to drastically reduce their metabolism and body temperature saves them huge amounts of energy. Torpor can lower their energy usage by up to 50 times. This ensures they can live through the night, even when nights get very cold. 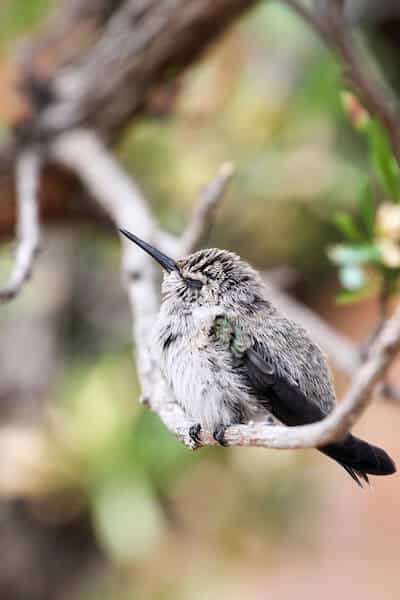 Which hummingbirds use torpor?

All hummingbirds possess this ability. But how often and how deeply can depend on the species, the size, and their location.

The largest diversity of hummingbird species live in the neotropics and take advantage of the warm climate. For those hummingbird species that migrate, they typically head north in the summer and south in the winter, following warmer temperatures. These measures help them avoid extremely cold temps, and have to rely on torpor less often.

However those that live high up in the Andes mountains or at other high elevations may enter torpor every night.

Size also plays a part. In a lab study of three species in Arizona, the smallest species went into a deep torpor every night, while the bigger species would switch between deep or shallow torpor, or regular sleep.

How do hummingbirds wake up from torpor?

It takes about 20-60 minutes for hummingbirds to fully awaken from torpor. During this period their heart rate and breathing increase, and their wing muscles vibrate. This vibrating (basically shivering) generates heat that warms the muscles and blood supply, warming their body several degrees each minute.

What causes them to wake up is not fully understood. In some cases it may be warming of the outside air after sunrise. But hummingbirds have also been observed waking up 1-2 hours before dawn. Most scientists believe it has more to do with their circadian rhythm than any external forces. This is the body’s internal clock that governs your daily sleep – wake cycle.

Do hummingbirds sleep during the day?

If a hummingbird is sleeping or entering torpor during the day it usually means they do not have enough energy reserves and are in danger of starving if they don’t reduce their energy requirements. This is usually caused by inability to find food either due to food scarcity, illness / injury, or very bad weather.

While not considered dangerous, there is some risk associated with torpor. While they are in torpor, hummingbirds remain in an unresponsive state. Unable to fly away or defend themselves against predators.

Torpor is different than a regular sleep state. During sleep, many processes occur in the brain and body on a cellular level that remove waste, repair cells, and aid in overall rejuvenation and restoration of health. Due to the extremely low energy state of torpor, many of these processes do not happen and the immune system does not function. This may leave hummingbirds more vulnerable to disease.

So hummingbirds have to manage their need for energy savings versus costs of deep torpor.

Can other birds go into torpor?

At least 42 bird species are known to use shallow torpor, however it is only nightjars, one species of mousebird and hummingbirds that use deep torpor. Other birds that experience torpor are swallows, swifts and poorwills. Scientists also theorize that most small birds living in very cold regions utilize torpor to survive cold nights.

The high energy that makes hummingbirds so fun to watch during the day can cause them trouble during periods where they can’t consume food fast enough to keep their metabolism going. To conserve large amounts of energy and ensure their survival through long nights and cold temperatures, they can enter a state even deeper than sleep called torpor. Torpor slows down their breathing, heart rate, metabolism and drops their body temperature. Hummingbirds have adapted to be able to enter this state any time they need to, and it usually only takes them around 30 minutes to fully “wake up”.