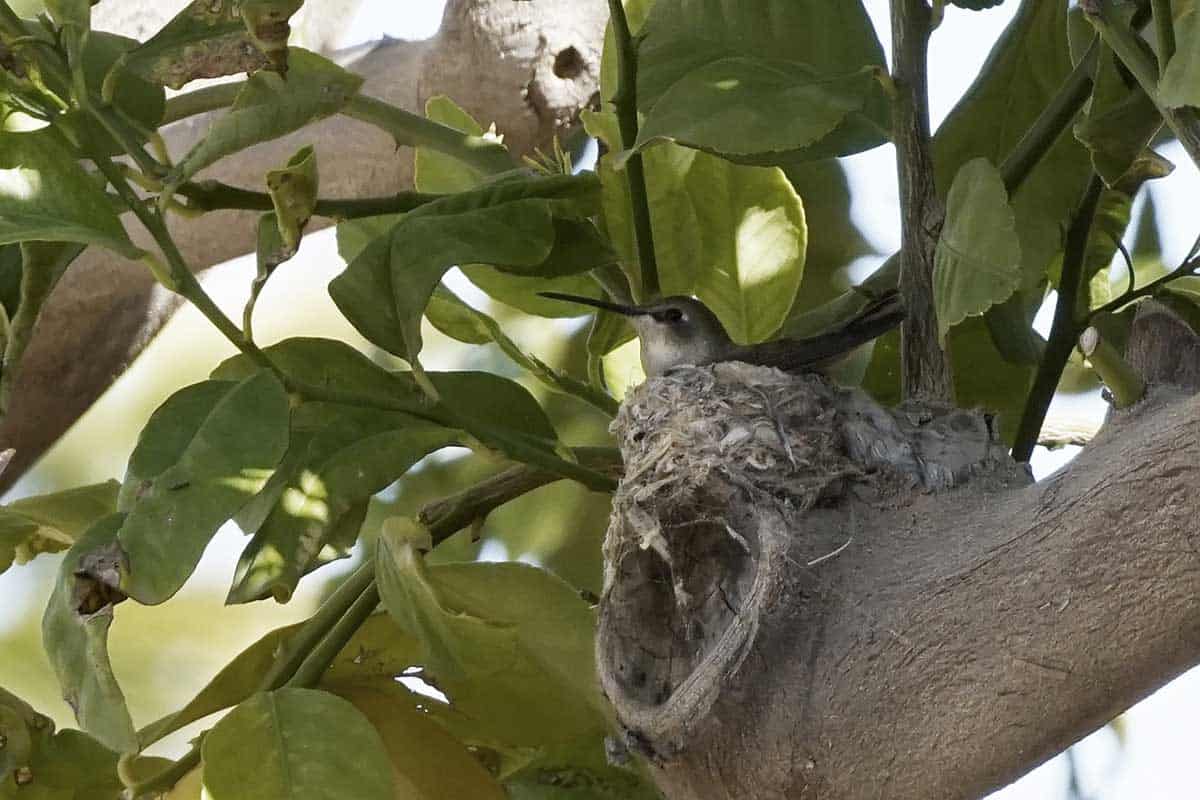 Hummingbirds are beautiful, exciting birds to watch, and the sight of their small, bright bodies, rapidly beating wings, and elegant beaks is a common one around flower beds and feeders. In fact, it’s probably hard for you to picture a hummingbird at rest, and you may never have seen one that wasn’t busily hovering and flitting around. So that begs the question, where do hummingbirds go at night?

Where do hummingbirds go at night?

Hummingbirds find warm, sheltered spots in trees to spend the night. Usually this means somewhere deep in the leaves and branches so they’re as protected as possible from the weather.

Hummingbirds use up a lot of energy during the day. They’re constantly in flight, even hovering while they eat, so they definitely need a good, restful night’s sleep. The challenge is that they’re so small, even mildly cool weather could drop their body temperature enough to kill them. When hummingbirds are preparing for the night, they look for sheltered spots on tree branches, and then they go into a state of torpor. 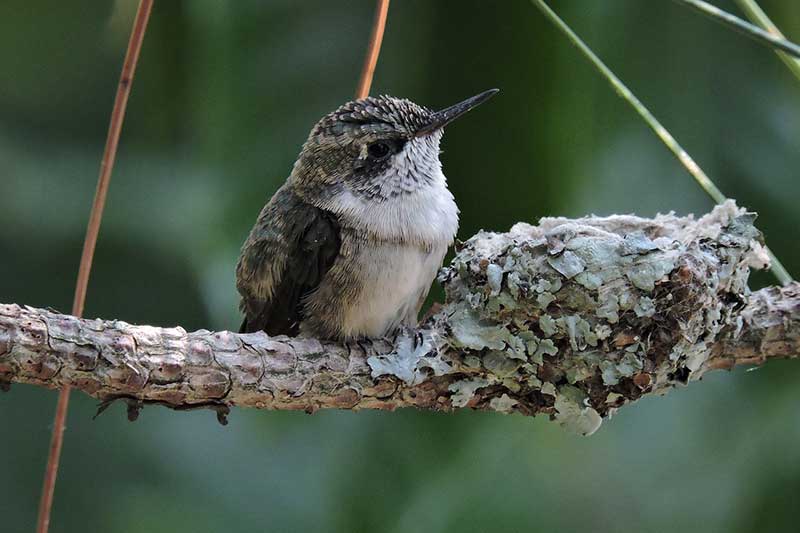 This isn’t just sleep- it’s actually a form of hibernation. Their metabolism slows down and their body temperature drops, which helps to conserve energy as well as enabling them to survive cooler temperatures. To give you an idea of how much their metabolism slows, a hummingbird’s heart beats 1200 times a minute when they’re awake. In torpor, it beats just 50 times a minute.

They cling to their branch (or sit in their nest), retract their neck and fluff their feathers out. They might even hang upside down from the branch, like a bat. It can take them up to an hour to fully wake up from this state.

Do hummingbirds fly at night?

Sometimes, yes. In warmer weather some hummingbirds may feed for a while after the sun sets, especially if there’s artificial lighting in the area. This isn’t typical behavior, though, and more often than not hummingbirds will start to settle in for the night about thirty minutes before sundown.

The one big exception to that rule is migration season. When hummingbirds are migrating it can be common for them to fly at night. Some species that migrate over the Gulf of Mexico have no other choice- it’s a 500 mile flight over the open ocean with no place to rest, and they’ll often leave at dusk. It’s a 20-hour flight for them, so a good chunk of that is done in the dark.

Do hummingbirds leave their nest at night?

No, once the female hummingbird has lain her eggs, she incubates them all night long and then throughout most of the day. Remember, adult hummingbirds are very susceptible to cold because of their small size; this is doubly true for the eggs and chicks. In fact, even during the day, the mother will only leave for brief feeding trips.

If you see an empty hummingbird nest, it’s likely that the chicks have already matured enough to leave the nest. In fact, they typically leave the nest just three weeks after hatching. 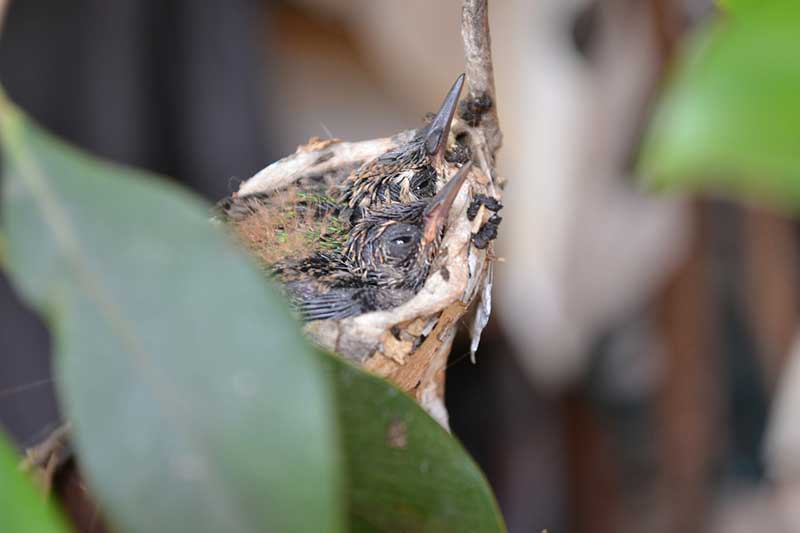 Do hummingbirds feed at night?

Not usually, but there are times when it happens. In areas with warm weather and artificial lining some birds may feed after sundown. Even under these conditions, that’s quite rare. Hummingbirds are not nocturnal by nature, so night feedings are unusual.

Can hummingbirds see at night?

Hummingbirds don’t have very good night vision, since they’re rarely active in the dark. There just isn’t much reason for them to have good eyesight in the dark. When they’re active after sunset, it’s either around artificial lighting, or while migrating over the open ocean, and they don’t need good night vision in either of these situations.

Where do hummingbirds sleep?

Hummingbirds don’t like to sleep in tight, enclosed spaces, so they aren’t drawn to birdhouses and you’ll rarely find them nesting near your home. They much prefer to roost and nest in trees, and especially in places that aren’t easily visible.

What kind of trees do hummingbirds sleep in?

Hummingbirds prefer deciduous trees like oak, birch, or poplar trees over evergreens like pine. These trees often have lots or branches and lots of leaves, creating numerous sheltered spaces for the hummingbirds to safely sleep in.

They tend to build their nests in these same locations, and often like to find spots where the branches fork. Hummingbird nests are almost impossible to spot, because they’re tiny, well-camouflaged, and hidden deep within the trees. 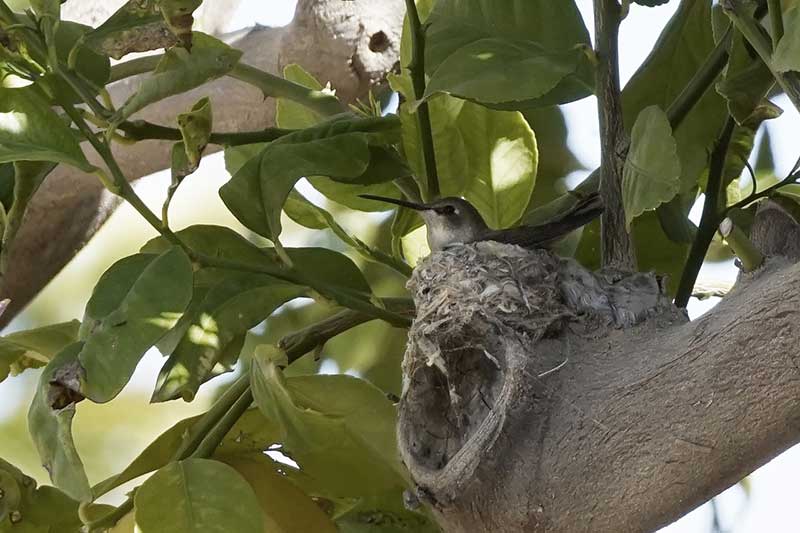 Do hummingbirds sleep together?

Hummingbirds are solitary creatures, and they tend to sleep alone. They don’t need to share body heat to keep warm, since their ability to go into a state of torpor keeps them safe in the cold weather. Of course, female hummingbirds will sleep with their chicks while their raising them.

That said, it’s common for several hummingbirds to sleep in the same tree or bush, and sometimes even on the same branch. They’ll generally be spaced out in these places, though, rather than huddling together as some other bird species’ do. Even when they migrate, they don’t form flocks like other birds.

Do hummingbirds sleep upside down?

Yes, hummingbirds sometimes sleep upside down. Many people assume that these birds are dead or sick, especially because, in their state of torpor, it takes some time for them to wake up and respond to external stimuli, so they can seem dead or sick when you try to wake them.

It isn’t entirely clear why this happens, but some think it’s simply because in their state of torpor they sometimes have trouble staying balanced on top of the branch. Just remember, an upside down hummingbird is in no danger, and is best left along.

Hummingbirds are fascinating little creatures with remarkable feeding and sleeping habits. We rarely get to observe them at night, and so their night lives are something that birders are constantly interested in. Of course, like many animals, their nightly habits are pretty pedestrian. They simply find a comfortable spot and go to sleep.

Even if hummingbirds have pretty boring sleeping habits, we hope this article shined a little bit of light on the question, “where do hummingbirds go at night?”.