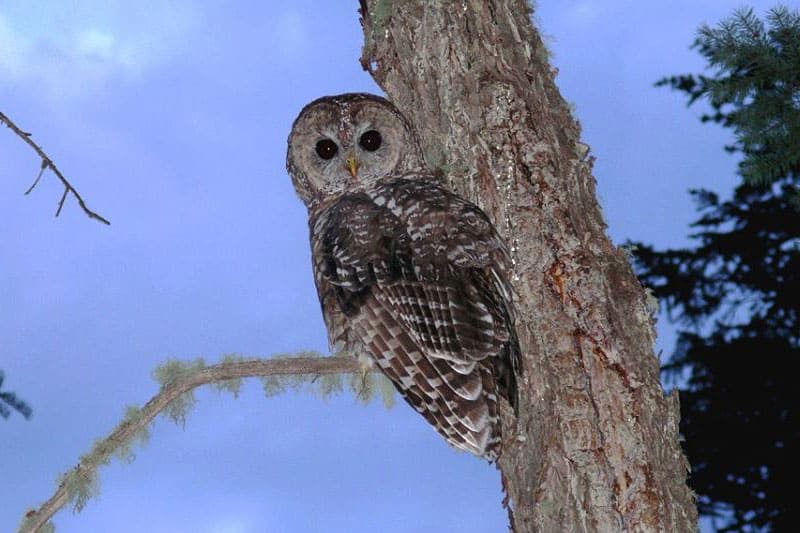 It’s the 3rd largest state in the country boasting 155, 973 square miles, within the state of California there are several climates and temperature zones. Redwood National Forest in Northern California is also one of the only regions in the United States where old-growth temperate rainforests exist. There are many types of birds that live in the state, including a large variety of common and rare owls. Keep reading to learn all about the 14 species of owls in California, some pictures to identify them, and some helpful tips for how to find them.

Species of Owls in California

In the majority of Northern California, Northern Saw-whet Owls are found year-round. Though in parts of Central and Southern California they have a non-breeding range only. These owls tend to occupy dense coniferous forests and groves and can be pretty hard to locate due to their tiny size, camouflage-like coloration, and secretive nature.

If you live in California, in an area where Northern Saw-whet Owls breed, consider putting up a nesting box for them. Not only will it provide a home for a breeding pair of owls, but it will also increase your chances of getting an up-close look at these tiny birds.

Barn Owls are commonly found throughout America and across the globe. In California they’re found year-round in all parts of the state, in woodlands and open areas. They love to roost and nest in quiet, abandoned places like forgotten barns — hence the name “barn” owl. Farmland often provides plenty of rodents such as mice and voles that comprise the majority of these owls’ diets. At night they silently fly close to the ground, using their pristine eyesight and hearing to locate prey in the darkest of conditions.

These owls have pale, white faces with dark beady eyes. They’re medium-sized owls about the same size as a crow. Their calls aren’t the typical hoots that first come to mind, but rather harsh, raspy sounding screeches. Listen for them calling in the evening once the sun goes down, and keep your eyes peeled for a flash of white glide by.

Length: 6.4-7.1 in
Weight: 2.1-2.5 oz
Wingspan: 14.5–16 in
Northern Pygmy-Owls are generally widespread in the mountainous western United States and are found year-round in spotty areas of California, primarily in northern and coastal areas of the state. They’re active during the day, which makes seeing them a little easier than most other nocturnal owls. They’re also pretty small and tend to perch still waiting for prey,  so you still need to keep your eyes peeled.

Western-screech Owls are commonly found year-round throughout most of California. They’re small, robin-sized owls with stocky bodies and short tails. Their mostly gray-brown plumage with streaky undersides camouflages them exceptionally well against trees when they’re roosting in holes during the day. At night they hunt, perching still and silently before swiftly flying and seizing their prey. They’ll also catch insects in mid flight to supplement their diet, as well as reptiles, fish, and small birds.

Like trying the find other nocturnal owls, waiting for their calls at night is often the best way of locating Western-screech Owls. Their calls are a series of high-pitched toots that speed up slightly at the end. These owls will also take to nesting boxes, so consider setting one up in your yard if you live in their range.

When one thinks of an owl, the Great Horned Owl is often what comes to mind. These owls possess all the characteristics synonymous with story-book owls; large, cat-like eyes, long tufts on their heads, thick, stocky bodies, and a deep, mysterious hoot.

They’re one of the most commonly found owls across North America and are found year-round in California. Great Horned Owls thrive in a wide variety of habitats, but they’re often found in woodlands with plenty of open spaces to hunt. These large owls are aggressive hunters able of taking down prey much larger than them.

It’s common to find Short-eared Owls year-round in Northern California, and in the winter time in Central and Southern California. They’re also one of the easier owl species to spot, due to their frequent daytime activity and tendency to occupy open spaces like fields and grasslands. Their broad, round wings allow them to gracefully flap close to the ground with a seemingly weightless appearance.

Great Gray Owls are found year-round in parts of Northeastern California. They’re very large birds with broad wings and long tails, one of the tallest owls in America. Their eyes appear small and close together on their big facial disks, giving them a unique expression. A white “X” pattern on their faces is another key identifier. Like their name implies, their bodies are covered in fluffy, silvery gray feathers.

Long-eared Owls are found year-round in areas of Central California, with a non-breeding range in most of the state. In general though they’re fairly widespread, these owls are pretty secretive in nature, making them tricky to spot. During the day they roost in dense foliage, waking up to hunt at night.

Their plumage is a mixture of dark browns and grays which camouflages them nicely against trees. They get their name from the long tufts on the tops of their heads, giving them the appearance of having ears.

Though rare, there are small portions of Northern California where year-round populations of Barred Owls are found. The main range of these owls is the south eastern United States, primarily in swamps. In Washington State the best places to look for them are woodlands and forests near bodies of water.

They’re most active at night, but they sometimes call and hunt during the daytime as well. Listening for their distinct, rich-sounding “who cooks for you?” call usually pans out better for finding these owls than just searching for them in the trees.

Barred owls are large birds with stocky bodies and smooth, round heads. Their eyes are wide and so deeply brown that they appear completely black. They have white and brown mottling all over their plumage, with vertical brown barring on their undersides and vertical barring on their upper parts.

California Spotted Owls live in a few patchy areas of California year-round, but finding them is extremely rare. It’s population has greatly declined due to the logging of old-growth forests, the Spotted Owl’s habitat. Competition with Barred Owls also makes survival more difficult for these owls. You may also find some Northern Spotted Owls in far north areas of the state.

Spotted Owls are slightly smaller than Barred Owls, with broad, rounded wings, short tails, and round heads. They’re covered in mostly dark brown plumage, with white dappling throughout. Their facial disks also feature a white “X” marking that helps identify them. Like most owls, Spotted Owls are active at night, when they hunt for small prey, mostly rodents. Their loud, deep hoots can sometimes echo for over a mile on still nights near forests.

Snowy Owls aren’t commonly found in the state, but will sometimes appear in far Northern California winter during irruptive migrations, though this doesn’t happen every winter. At all other times of the year, Snowy Owls are primarily found in the arctic tundra and the majority of Canada in the winter. When they do appear in in the state, they’ve typically seen in spacious areas like fields.

Though they’re more frequently found further south in America, breeding populations of Burrowing Owls are sometimes spotted in south eastern portions of California. In addition there is a decent sized population of year-round Burrowing Owls in Southern California.

Their habitat is primarily wide stretches of grassland and prairie. Unlike most owls, Burrowing Owls nest underground, in dug out burrows and dens. These smart owls will also store extra food away in these underground chambers to sustain them through incubation and brooding periods.

Burrowing Owls are small, about the same height and length as a robin, but with stockier bodies. They have smooth, round heads with no ear tufts, and sandy-colored plumage with brown spots. These owls don’t rely on flying to catch prey, either. Instead, they hunt on the ground, chasing after insects and small animals with their long legs.

Flammulated Owls are only found during the breeding season in just a few pockets of California, though they tend to be fairly common where they are found. They’re very small in size and share a similar silhouette as screech-owl, but with shorter tufts on the tops of their heads.

Spotting them often proves to be quite tricky, as their pale gray-brown plumage blends in perfectly with tree bark. These owls prefer to occupy mature pine forests, where they roost during the day and hunt at night. Locating them at night tends to be much easier than trying to see them during the day. Listen for their deceptively low hoot to track them. However, this feat may also prove to be a challenge, since their calls often seem farther away than they really are.

Elf Owls have a breeding range in the far southern areas of California, including Baja. They are the smallest owls in California as well as in the whole world at just about the size of a sparrow! Look for them in California in the Spring and Summer months as they migrate south to warmer climates in Mexico during the winter.

You can identify Elf Owls by their tiny size, lack of ear-tufts that give them a round head, and brownish-gray feathers.  They feed primarily on insects and arthropods, but will sometimes eat small lizards and blind snakes. Elf Owls are listed as an endangered species in California and have been nearly extirpated due to habitat loss.