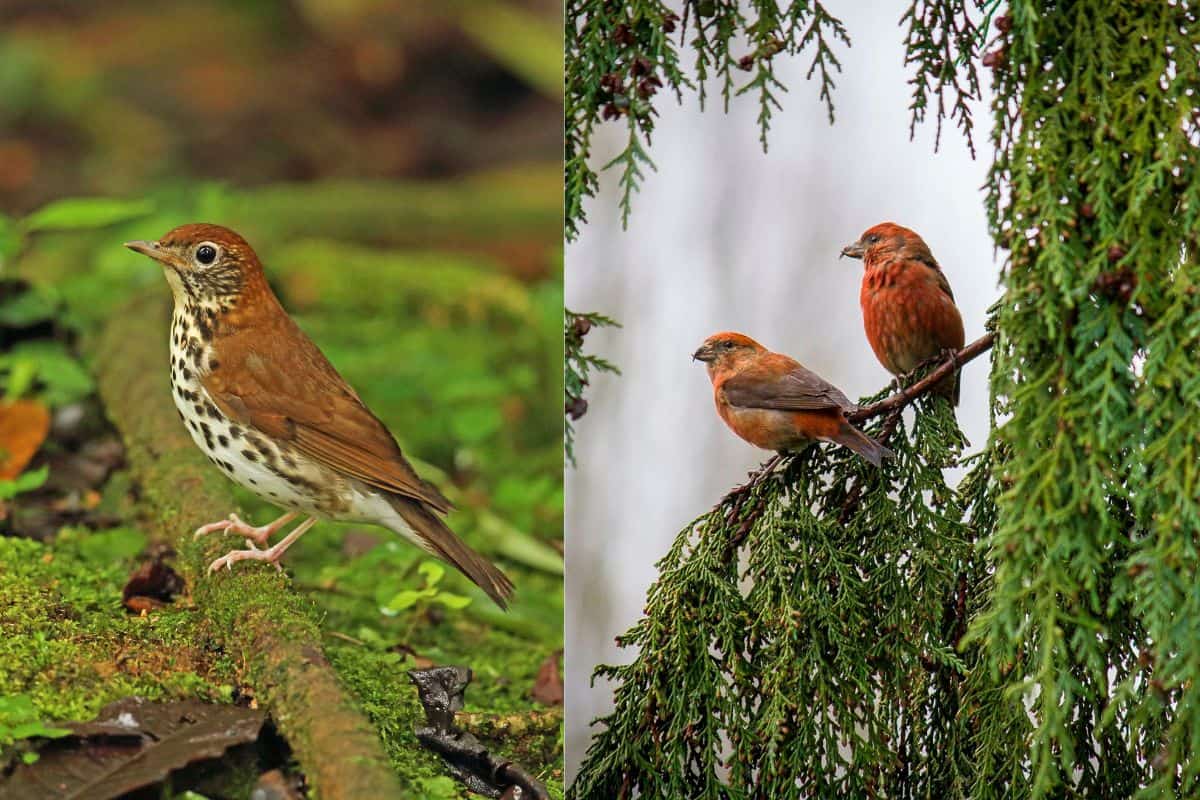 While many bird species we frequently see are happy to live in the suburbs, in parks, or even urban settings, some birds prefer the woods. Many species spend their whole lives deep within forests, or require large stretches of unbroken woods to thrive. Let’s take a look at 15 species of birds that live in forests, and prefer to spend most of their time there.

15 Birds that Live in Forests

Some of these forest birds can be enticed to come to backyards with bird feeders, especially if you happen to live along the edge of large stretches of woodland.

You are most likely to hear a wood thrush before you see one. They are cinnamon brown with a speckled breast that helps them blend into the forest floor where they forage. However, their song really stands out and is what they are most famous for. The sound is a rather magical, flute-like “ee-oh-lay” that is easy to recognize.

Listen for them in the woods when they return to the eastern U.S. in the spring and early summer. These birds prefer to stay in the forest interior, and aren’t typically seen in backyards unless you are close to a swath of forest. Wood thrushes eat insects, snails and berries.

The male Scarlet Tanager’s brilliant scarlet body and black wings stand out like a beacon against green leaves. You would think they are easy to spot, but because they stay within the forest and forage at the very tops of the trees, they are actually difficult to find.

Scarlet Tanagers return to the forests of the eastern U.S. in the spring from their winter home in South America. Males are red while females are yellow. In the fall, when the breeding season is over and it’s time to head south, males will lose their red feathers and become yellow like the females.

Listen for their “chick-burr” call in deciduous forests, and scan the tree tops for a flash of red.

The Barred Owl is one of the most common owls in the United States. They are native to the East and the Pacific Northwest. Most forests and swamps with trees are perfect habitat for these owls. Barred Owls have large black eyes on a gray face, a brown and gray mottled back and a heavily streaked chest. They are mostly nocturnal, but are sometimes active at dusk and dawn when you may spot them. You may also catch one quietly sitting on a tree branch snoozing during the day on a walk through the forest.

Listen for the Barred Owl’s call, “who-cooks-for-you,” at twilight and dusk. This distinctive call can sometimes even be heard in suburban neighborhoods, if large parcels of woods are nearby. 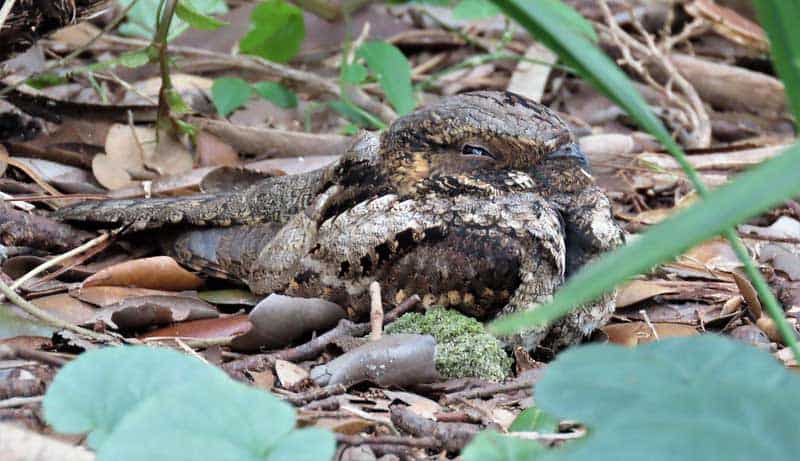 This nocturnal nightjar is famous in poems and folk songs for its call, “whip-poor-will,” which it repeats over and over at dawn and dusk. They spend all night capturing insects which they spot in the light from the moon and stars. You’ll have to be near some woods in the summer at night to hear them.

Native to the eastern United States, these insect-eating birds spend spring and summer in Eastern forests. They winter along the Atlantic, Florida, and Gulf Coast all the way down to Central America. Their mottled brown feathers are excellent camouflage to blend with tree bark and leaves on the forest floor.

Pileated Woodpeckers remain in the U.S. year round. They can be found east of the Mississippi River, across Canada, and in areas of the Pacific Northwest and California. These huge woodpeckers are crow-sized, and striking with their black body, white striped face and bright red head crest.

The Pileated Woodpecker prefers mature forest where there are plenty of large, dead trees for nesting. They eat insects and berried, with their favorite being carpenter ants and termites. Large, rectangular holes may be drilled into trees to reach these insects. While they are much less likely to be seen at backyard feeders than other woodpeckers, you can still attract them with a suet feeder if you live near woodlands.

The Pacific coast has a gem in the Red-breasted Sapsucker. This small woodpecker drills rows of holes in the trunks of trees to create wells of sap they can lick up. They can be found in many types of forested habitat, as long as their are enough mature sap-producing trees.

In the winter, it’s possible to attract them to your yard by offering suet. They like yards with trees, especially aspen and pines.

The Sharp-shinned Hawk is the smallest Hawk in the U.S., and have a wide range throughout the country. They require dense forest for breeding, and tend to stay in forest or forest edge even outside of the breeding season. Their body shape is adapted for hunting in the forest, with short wings, long legs and a long tail. This helps them maneuver and weave through the trees while chasing prey.

The best time to spot them is during their migration in the fall. The population that spends the summer in Canada flies south through the middle U.S. to spend the winter in the southern states and Mexico.

The tiny Brown Creeper can be found all year in the northeast and western parts of the country, but may spread to all states during the winter. These woodland birds “creep” up and down tree trunks, looking for insects in the cracks of bark. The larger and older the tree, the better.

From the side you can see their all white underparts, but from the back their brown mottled feathers blend in to tree bark. They use their long, stiff tail feathers to help brace against the tree, and their long toe claws to grasp the bark.

The Veery is a member of the thrush family, and looks similar to other thrushes. Identify them by their warmer brown coloring, and their mostly plain belly with just a few spots on the breast. Veery’s breed in Canada, New England, and states along the northern border and mid-west.  They like deciduous woodlands near streams and swamps.

In fall, they migrate all the way down to central parts of South America, and pass through most of the eastern and middle U.S. on the way.

Their calls that fills summer forests has been described as a descending flute-like veer, that a sounds like air swirling down a metal pipe.

Steller’s Jays are relatives of their more common cousin, the Blue Jay. These striking and large jays have a dark gray upper half with a tall crest, and a darker blue bottom half. Unlike Blue Jays, Steller’s Jays can only be found in the western United States. Their habitat ranges from the Pacific Northwest to the Rockies and into the Southwest.

Because of their larger size, they can carry several acorns or other large nuts in their mouth at once, and often cache these for later. They will visit backyard feeders for peanuts and suet.

Is it a Brown-headed Nuthatch, or a squeaky toy? This bird of the Southeast makes a call that sounds just like a dog toy. Look for them scurrying up and down the trunks of trees in mature pine forests. They often travel in flocks made up of families. They cling to trees and search for insects among the bark. These nuthatches have even been observed using small pieces of bark as a tool to pry away larger bark flakes from trees in search of food.

They may visit suet and seed feeders if you live near their range.

While males are red and females are yellow, both sexes sport the signature crisscrossed bill this species is named for. You can find them in mature coniferous forests  of Canada, the western U.S., and some areas around the northern Great Lakes. They may shift their range year to year in search of their main food source, conifer seeds.

Their interestingly shaped bill is an adaptation that allows them to crack open pine, fir and spruce cones to get the seeds inside. This gives them an advantage over other finch species, who are unable to pry cones open.

The Western forest and Pacific Coast are enriched by the lilting song of the Black-headed Grosbeak. They live in coniferous forests during the spring and summer, then migrate south to Mexico in the winter. Their preference is forest with large trees and lots of understory to forage for insects, seeds and fruits. Their beaks are so tough, they can even crack snail shells.

The migrating grosbeak of the eastern U.S. is the Rose-breasted Grosbeak. While females are brown streaked, males sport dynamic scarlet, white, and black. The best time to spot them is in the spring as they pass through the southern and middle states towards their summer range in the northeast. They have a pretty song, like an even happier version of a robin.

Rose-breasted Grosbeaks are known to stop at bird feeders for sunflower and other seeds during the spring and fall. In the summer, they prefer to stick to the woods and hunt for insects.

The Ovenbird is a tiny forest bird with a loud voice. Rather than a melodious song, they call “tea-Cher, tea-Cher” several times in a row, increasing in volume. It is a familiar and hard to miss summer sound in the woodlands of the eastern U.S. While they are members of the warbler family, they look more like a thrush with their brown back and speckled breast.

Ovenbirds hunt through leaf litter on the forest floor for insects and other invertebrates. They get their unusual name from their nest. Nests are constructed on the ground, in the shape of a dome with an entrance on the side. This somewhat resembles a Dutch-oven, giving the bird its name.