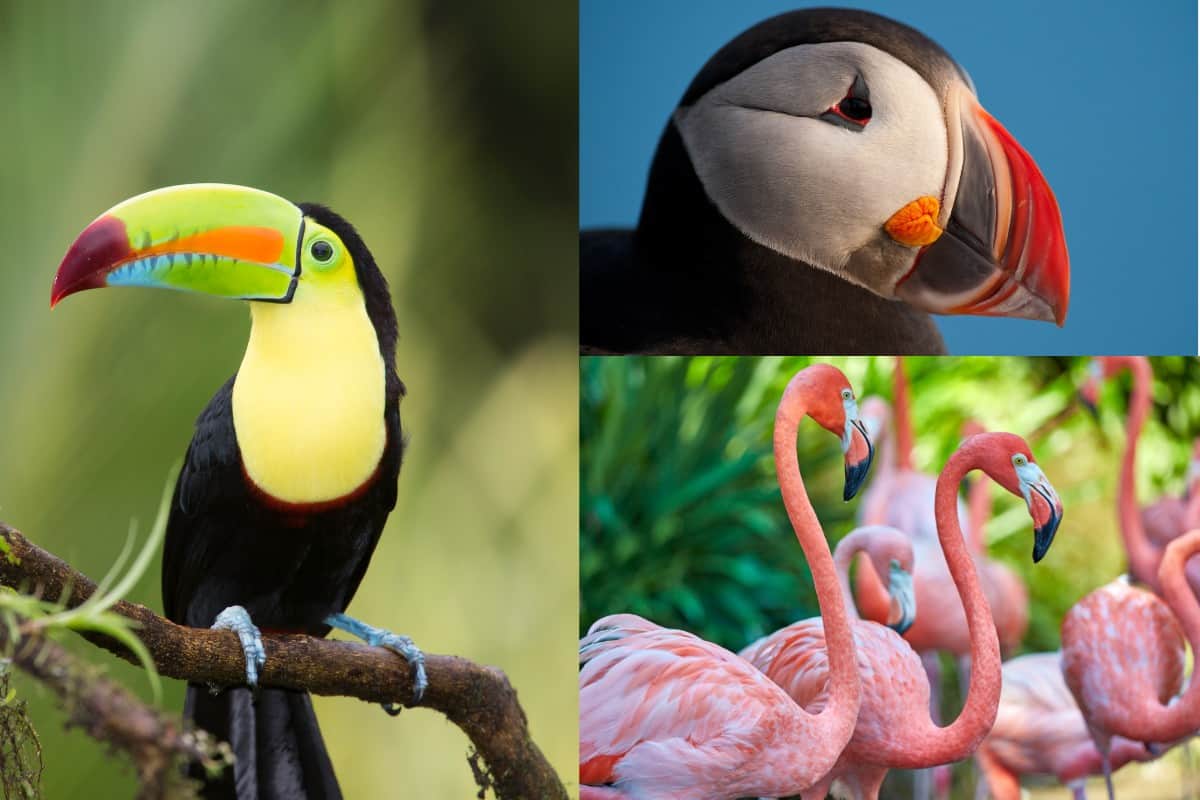 A bird’s beak can be one of their most distinctive features. Beaks are not only used for eating and drinking, but can also aid in fighting, cleaning plumage and nest building. However, not all beaks are created equal. Many birds have fairly plain colored beaks. However some are quite bright and flashy. This depends on the species, as the genetic makeup of these birds evolves over time to help them survive in the wild. In this article, we’ll look at birds with colorful beaks.

The Toco toucan is a beautiful bird with a large bill. It has a black body, a well-defined white throat, and a bright blue eye. This large bird is also known for its large, brightly colored beak, which is yellow-orange in color with a black tip. Toco toucans can grow to be up to 60 centimeters long, with their beak accounting for one-third of their overall length.

They prefer dry semi-open areas like savannas and plantations, particularly in South and Central America. These birds eat fruit, insects, and even other birds’ eggs.

The Rhinoceros Hornbill is a large, colorful bird found in Southeast Asia, specifically Malaysia, Thailand, and Myanmar. They’re large birds that can reach 3 feet in length and weigh 6 pounds. It’s distinguished by its large beak, which is recognized by the presence of a casque, or a large bone, attached to its upper mandible. This gives the appearance of a second bill stacked upside down on top of their main bill. They can’t eat with it or use it like a normal beak, but it serves as a resonating chamber, increasing the volume of their calls and attracting mates.

Although their beaks are naturally white, an orange-yellow substance secreted by their uropygial gland causes them to appear to have a reddish or orange tint as they grow older.

They have a very long yellow-orange bill, with a gular pouch attached to the bottom bill that matches their bill color. American white pelicans use them to defend themselves when a threat approaches, as well as to eat fish and other amphibians that they scoop out of the water.

Rainbow Lorikeets are brightly colored lorikeets that belong to the parrot family. This colorful bird is indigenous to Australia, where you can find it in coastal, woodland, and rainforest habitats.

Their backs, wings, and tails are bright green, with blue heads and orange undersides. Its beak is bright red with a hint of pale yellow at the tip. Their beaks are black at birth, then change color as they mature. These lorikeets have a brush-like tongue that helps them eat pollen from flowers.

The Atlantic Puffin is a small seabird with a greyish-black back and white underparts. During the breeding season, they have a white face and multi-colored bill in hues of yellow, black and orange. In the non-breeding season, the front of their face becomes gray and they loose the yellow accents on their beak.

Their beaks are jagged, allowing them to catch and hold up to ten fish in their mouth at once, and their feathers are waterproof, keeping them warm even after diving for food. They spend most of their life out in the ocean, only spending chunks of time on land to breed. These are cold water birds of the far north, but you may be able to see them in the U.S. if you visit rocky islands off the coast of Maine.

The keel-billed toucan is found in Central and South American rainforests, where it feeds on fruit, eggs, and insects. It’s the national bird of Belize and is a colorful, large bird with a distinctive, large beak.

In tropical and subtropical rainforests, they’re typically found in groups of up to 22 individuals. Keel-billed toucans have large and colorful beaks that are roughly one-third the size of their body. The majority of their beak is neon green, with an orange stripe on each side, a spash of bright blue on the lower mandible and a deep crimson red tip. This species’ feathers are mostly black with yellow cheeks and throat, emphasizing the colors of their beaks. 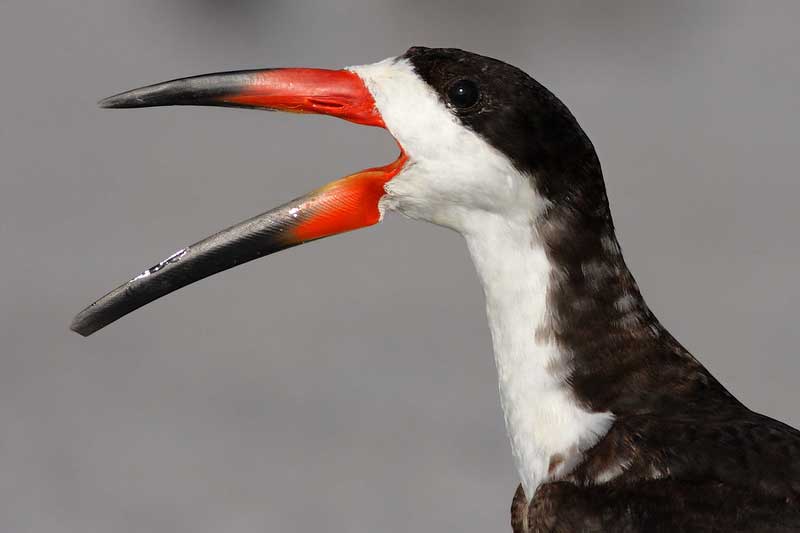 Black Skimmers are found in North and South America, primarily along the Atlantic and Pacific coasts. Their bodies are covered in black plumage, with white foreheads and undersides. The base of their beak is a bright reddish-orange, fading into black at the tip. This coloring really stands out against their otherwise black and white body. Not only is their beak colorful, but the size and shape are pretty unique looking too.

Fish, crustaceans, and other marine invertebrates are eaten by Black Skimmers, who catch them by dipping the lower half of their bill into water, and dragging it across the water as they fly low over the surface. They then snap their bills shut when they feel something edible. This feeding method is called “skimming”, and gives the birds their name.

The flamingo is a large bird known for its distinctive pink coloration. They’re pink because they consume brine shrimp, which contains carotenoid pigments. This aquatic bird lives near the coast and nests in mudflats, where there is an abundance of food. They have long necks and legs, as well as pink or cream beaks with black tips. Flamingos are typically found in colonies containing thousands of these bird species.

They also feed on algae and other small sea creatures found in shallow water, such as brine shrimp and larvae. Depending on the species the beak shape and color varies. The American flamingo pictured here, has white at the base of the beak, which then turns pink in the middle and ends with a crisp black tip.

The American Purple Gallinule is a water bird found in marshes and wetlands in Florida and south through much of South America. This bird primarily feeds on plants, but it’ll also eat small aquatic vertebrates such as fish, birds, and small reptiles. Their extremely long toes help them walk on top of aquatic vegetation like lily pads.

The American Purple Gallinule is distinguished by its bright purple feathers and a dark green-brown iridescence on its wings and back. They have long yellowish-green legs, and their beaks are red with a yellow tip.

The Great Hornbill is a large bird with a wingspan of up to 60 inches. They live in Southeast Asian forests and can be seen nesting in old trees that are tall enough to extend beyond the canopy’s height. Great Hornbills mainly eat fruit, but will also supplement with insects, small mammals, and reptiles. They have large colorful bills of yellow and white that they use to tear open fruits.

The some of the yellow beak coloring is caused by oil secreted in a gland near their tail and spread while grooming. Like the other hornbill on this list, they have a large bony casque on top of their head and beak. When viewed from the front it is shaped like the letter U. It isn’t well known what purpose it serves, but it may aid in mate selection.

The Wood Duck is an attractive medium-sized duck with colorful feathers and a rectangular-shaped tail. The male has iridescent greenish-blue plumage on his head and a crest that often appears like a slicked-back mohawk. Females are mostly brown, with white throats and gray chests. Like the plumage, males are the ones with colorful beaks. Their beaks are a mix of red, black and white, with a hint of yellow around the base.

Throughout North America, you can find these ducks near lakes, ponds, rivers, and streams. During the breeding season, they prefer to nest in tree cavities near water, where they lay 6 to 15 eggs.

Bateleurs are a type of eagle that has been observed in the African Savannah’s and parts of Arabia. They live in open areas where they can see their prey from above. Bateleurs have large wingspans (around 6 ft 3 in) that allow them to soar through the air and catch prey. Their beaks are yellow in the middle and red at the base, with sharp black tips.

They’re scavengers, and their diet consists mostly of dead animals, but they’ll also hunt for small animals such as snakes and other birds.

Louise is a professional content writer that focuses mostly on wildlife, animals, and nature. She's developed a growing interest in animal biology and categorization due to her fascination with how they interact with one another and with their surroundings.