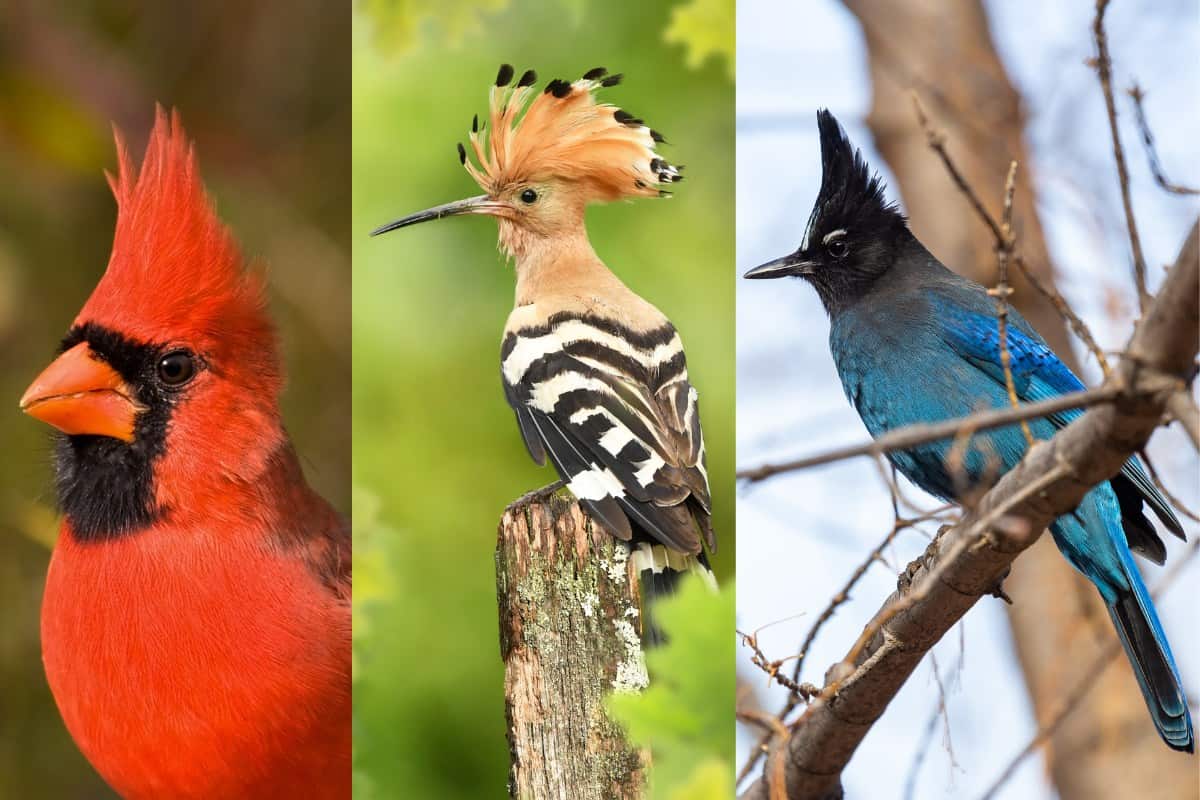 Some birds have feathers that stick up from the top of their head like a mohawk. This is called a “crest”. Birds can use crests for many things, including attracting mates, communication and territory disputes. Thanks to natural selection and the birds’ adaptation to their environment, there are a multitude of crest shapes and sizes. Crests can be big or small, in the same color as surrounding feathers or in a totally different shade. It all depends on the species of bird!  Keep reading to learn about 17 birds with mohawks.

We’ll start with some more familiar North American species, then branch out interesting birds from all over the world.

The Northern Cardinal is one of the most well-known songbirds in North America. From its cheerful chirps to its bright red feathers, it’s often one of the first birds nature enthusiasts learn to spot. Males are scarlet, while females are a brown with tinges of coral and red. Both males and females sport a triangle-shaped crest on top of their head.

Northern Cardinals will readily visit backyard birdfeeders, with sunflower being one of their favorite seeds. Visit here to learn more about attracting cardinals to your yard. 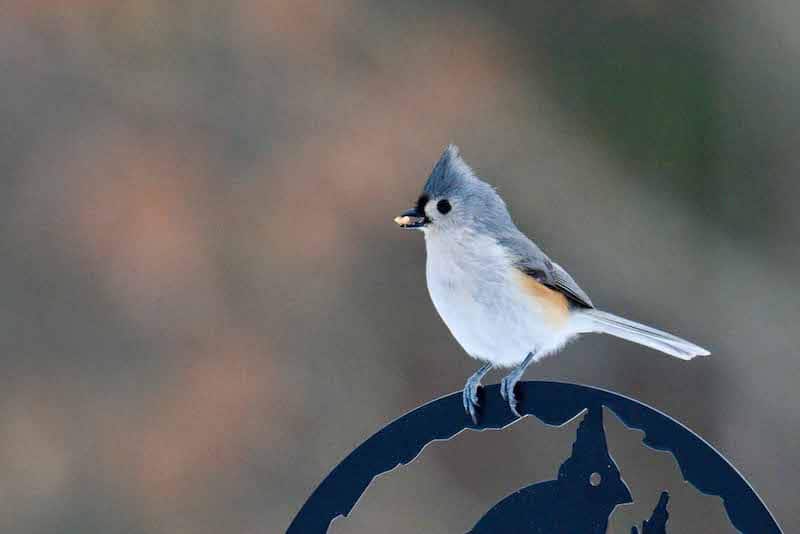 You’ll hear the gentle peter-peter-peter song of the Tufted Titmouse east of the Mississippi River. These gray and blue songbirds live year-round in the forests and woodlands of the eastern half of the United States. Males and females have the same plumage, sporting a small gray crest on top of their head.

Titmice are seed eaters who gladly visit bird feeders. They are often one of the first birds to find a feeder!

Pileated Woodpeckers are hard to miss, as they are the largest species of woodpecker in North America.  You’ll see them in the forests of the Eastern United States and through southern Canada and the Pacific Northwest. They can leave behind huge oval-shaped holes in tree trunks when searching for insects. Both males and females sport a large red mohawk.

While these large woodpeckers mainly stick to the woods, they occasionally visit bird feeders, especially during winter when they look for suet. But your feeder will have to be large enough to handle them!

The beautiful Steller’s Jay makes its home in coniferous mountain forests of the western United States, British Columbia and parts of Mexico. But you don’t have to climb a mountain to find one, as they are known to visit campgrounds, parks and even backyards within their range. Try attracting them with peanuts or other large nuts.

Males and females share the same coloring, a dark gray front half with dark blue wings and tail. They have a pretty significant gray crest that they can lift up or flatten down.

The Cedar Waxwing is an elegant looking bird, with its soft colors and striking black eye mask. They live year-round in the northern half of the U.S., and visit the southern half during the winter months. While they do eat some insects, a large portion of their diet all year is fruit such as mulberry, dogwood, serviceberry and raspberries. The best way to attract these birds to your yard is by having some berry producing trees and shrubs.

Males and females have the same plumage, including a tawny brown crest. You’ll often see it “slicked back” with the longer feathers trailing behind their head. However they can fluff them up to make the crest more noticeable.

In the eastern half of the United States and parts of Canada, the Great Crested Flycatcher inhabits forests and woodlands during the spring and summer months where it searches for insects. They are common birds, however often hard to spot because they spend so much of their time high up in the tree canopy looking for insects.

Great Crested Flycatchers have a yellow belly, brown wings and a grayish-brown head. Their head crest isn’t particularly tall, but does give their head a signature “squared-off” look.

Cockatiels are a species of parrot native to Australia. They’ve been domesticated for over a century and are popular pets. Their friendly nature and adaptability have lent them well to semi-domestication.

Both sexes have similar coloring – yellow, white, gray, and a red cheek spot – but males lose the gray chest feathers and replace them with bright yellow feathers.

Cockatiels use their crests to communicate their moods and emotions. Much like the way a dog wags its tail when it is happy, a Cockatiel will hold its crest flat but curved in the back when it feels outgoing.

The Pyrrhuloxia is related to the more widespread northern cardinal, but is only found in the hot deserts of the southwest. They have gray bodies, fat yellow beaks and red highlights. Males have red on the face and chest where females do not. Both sexes sport a shaggy crest of gray and red feathers.

While they are territorial during the breeding season, they will join together in the winter into huge flocks.

The Wood Duck is a waterfowl species with wide range across the United States and Canada. Populations live year-round in the East and Pacific Northwest. Other migratory populations spend the warm months in the Great Lakes region. They winter in the southern Great Plains and southwest.

Males and females look quite different. Males are very colorful and have the characteristic iridescent mohawk-like crest. Their bright red eye is impossible to miss.

The Eurasian Hoopoe has one of the most vibrant, three-dimensional crests of the birds on this list. They can fold their crest to give their head a long and pointed look, or fan it out into an impressive cinnamon mohawk with black tips. They live throughout Europe, Asia, Southern Europe, and Sub-Saharan Africa. The hoope’s long bill and zebra-striped wings add to it’s unique appearance.

It gets its name from the call it makes, which sounds like hoo-poo-poo. They are notorious in both history and legend; ancient cultures’ art depicted the birds and used them to represent birth order in families.

The blue-gray Victoria crowned pigeon is a native to the islands of New Guinea. It’s one of three species of crowned pigeons – these are pigeons with tall mohawk-like feathers on the crowns of their heads. They were named in memory of Queen Victoria of Britain.

Victoria crowned pigeons are kept by captive breeders and naturalists, but wild birds are shyer. They inhabit the forest floor, where they search for fallen fruit in large groups.

The fruit-eating Red-whiskered Bulbul is a native songbird to Asia. While they don’t really have whiskers, they are named for the small red patch behind their eye. These bulbuls live in tropical forests of the continent, where they fly amid the canopy eating fruit. They visit human settlements, especially domestic gardens and orchards.

You’re unlikely to see a red-whiskered bulbul in open spaces. They like to rest in thickets and dense stands of trees and shrubs.

Like most ground-dwelling gamebirds, the male Golden Pheasant is the ornate one. He has many layers of feathers that can be puffed out and put on display, including a bright yellow mohawk. This bird lives in thickets and forests worldwide, although they are native to China.

Many exotic animal owners have golden pheasants as yard birds. They are a colorful addition to Zen gardens, hedgerows, and backyard farms. Like chickens, they prefer to roost above-ground at night. Some are kept for their eggs, much like chickens.

The cute crested tit has a salt-and-pepper crest. While they appear quite similar to the U.S. Tufted Titmouse, these tits are only found in northern Europe. Their body has a plain buffy-gray coloring, while the markings on their head are quite distinctive. Aside from their head crest, they have a white ring around their neck outlined in black, and a black triangle behind their eye.

During the fall and winter, they join flocks of other seed eating birds for forage.

The Purple-crested Turaco is one of the most vibrantly colored birds on earth. They are a rainbow of green, indigo, red, and blue. Their crest is a mix of royal blue and indigo, and they have a delicate, parrot-like beak which they use to eat fruit.

They live in sub-Saharan Africa, where they forage in the wetter forests. Fruit is the primary component of their diet, and they are known for spreading seeds via their consumption of fruit.

The Smew is a Eurasian relative of the Goldeneye, another group of ducks which has populations in Europe and North America. Its appearance is unmistakable; birdwatchers coined the term ‘cracked ice’ to describe the color blocked white and black feathers of the male.

It’s easy to tell males and females apart. Females as well as juvenile birds of either sex have red-brown heads and grey feathers. However both sexes have a shaggy crest.

If you picture a cockatoo, an image of the Sulphur-crested cockatoo might be the first image that comes to mind. It is a large white bird with an impressive crescent-shaped yellow crest on the crown of its head. Their crests have a lot of mobility, being able to fan all the way out or fold completely down.

This bird is native to Australia and New Guinea. In Australia, they eat anything from fruit to tree seedlings to garbage. Some areas consider them pests and put in place nets and spikes to prevent them from nesting or destroying infrastructure. In other places, they are kept as pets. They’re not easy to take care of – they require many enrichment activities and a lot of socialization.