Hawks in California (The 9 Species With Pictures)

When one thinks of California, it’s probably palm trees and sunny beaches that come to mind. However, there’s a lot more to this large state, such as wide open deserts, mountains, and thick, massive forests up in the north. There’s also a wide range of wildlife that call this state home, including a diverse selection of birds of prey. In this article, we’re going to take a look at the species of hawks in California, and the best times to look for them.

9 species of hawks in California

California has 9 species of hawks that are either year-round residents or consistent residents for at least one season of the year. The year-round hawks of California include 3 species; Red-tailed Hawks, Red-shouldered Hawks, and Cooper’s Hawks. The other species of hawks regularly found in the state are Swainson’s Hawks, Rough-legged Hawks, Ferruginous Hawks, Northern Harriers, Northern Goshawks, and Sharp-shinned Hawks.

Red-tailed Hawks are the most common and widespread hawks in North America. Find them year-round in California on the edges of forests, open woodlands, prairie groves, and pretty much any other area that offers trees or tall perches as well as open grounds for hunting.

These hawks are often spotted during car rides, slowly circling above over roadside treetops, or perched on traffic lights or poles. If the wind is strong enough, they may take advantage of it and hover without flapping, scoping out the area for small rodents and other prey.

These hawks are larges buteos — they have short, wide tails that fan out in flight and long, broad wings with rounded edges. Like their name implies, they have tails with warm red coloration on the upper feathers, with pale feathers below. However, you might find Californian Red-tailed Hawks with differing colorations, as birds west of the Mississippi are frequently varied in overall color, ranging from very dark morphs to light, cream-colored morphs.

Red-shouldered Hawks are less common than Red-tailed Hawks, though stable, year-round populations are found along the western coast of California. These hawks are typically found in areas near bodies of water such as riverside woodlands, and swamps. Finding them is usually easier once you’re familiar with their distinct, “kee-ah” calls and whistles — as they’re often heard before they’re spotted.

These hawks are easily identifiable. They’re medium-sized buteos with silhouettes similar to Red-tailed Hawks, but smaller. Their wings are checkered with splotches of dark-brown and white, and their undersides feature beautiful red and white barring. While in flight it’s easy to observe the narrow, translucent crescents located near the tips of their wings.

Cooper’s Hawks are another common, year-round hawk in California. However, though widespread they are often hard to spot due to their stealthy behavior. They’re also smaller than other types of hawks like the Red-tailed Hawk, so picking them out isn’t as obvious.

Unlike Red-tailed and Red-shouldered Hawks, Cooper’s Hawks are accipiter hawks and possess longer tails and shorter wings than buteo hawks. They also consume other birds as a main component of their diet. These crow-sized hawks have gray plumage on their upper parts and white undersides with orangey barring.

These hawks tend stick to dense forests and woodlands that also offer open spaces for hunting. They use the cover of foliage and branches to sneak up and stalk their prey, silently moving from perch to perch. Then, once they have an opening, they take off in a burst of speed. Cooper’s Hawks are known to be very skilled fliers,  quickly chasing small birds through the trees.

Spotting a Swainson’s Hawk in California is tricky — these uncommon birds are only found during breeding season, and their populations have faced serious declines in the state. Your best chance of finding one is to head for open country. Swainson’s Hawks inhabit dry grasslands, plains, and other wide open spaces with scattered trees for nesting. They’re often soaring above these areas or perched high up. Sometimes they chase insects on the ground, or just sit and wait for them. In places where there are lots of crickets and grasshoppers, flocks hawks may sit together to enjoy their meals.

Swainson’s Hawks are buteos like Red-tailed and Red-shouldered Hawks, they have large bodies with broad wings and short tails. However, Swainson’s Hawks tend to be slimmer than other buteos, with longer wings as well. There are many variations in color among these hawks, with darker colored birds being more common in the west.

Overall they feature dark-brown upperparts with pale colored undersides. Males generally have gray heads while females have brown. Their underwings are distinctly colored with bright white plumage towards the body, and contrasting black feathers near the edges. 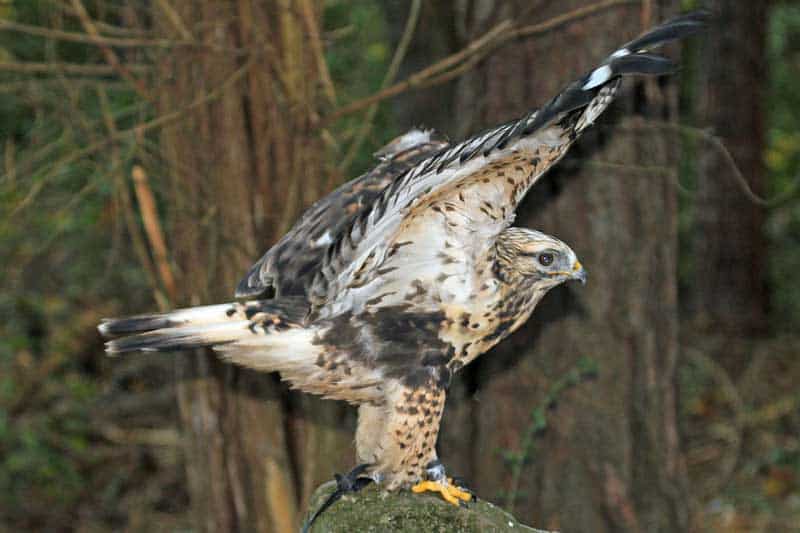 Non-breeding populations of Rough-legged Hawks are found in the north and along the eastern border of California during the winter. During the summer, they’re nesting n the Arctic, mostly north of the boreal forest, but in the winter they’re often spotted perched at the very top of a tall post or tree, or flying over open fields and marshes. They also like to hover while facing into the wind, searching for rodents and small animals down below.

Rough-legged Hawks got their name due to the feathers that run down their legs. These feathers help them keep warm when they migrate back north. The only other raptor in North America that also has feathered legs is the Golden Eagle. Rough-legged Hawks are buteos with long tails and long, narrow wings, when compared to other hawks.

Their bills are pretty small, too. They come in a range of color variations, but for the most part they have brown upperparts and pale undersides. The undersides of their tails are darker on the edge and pale towards the body. 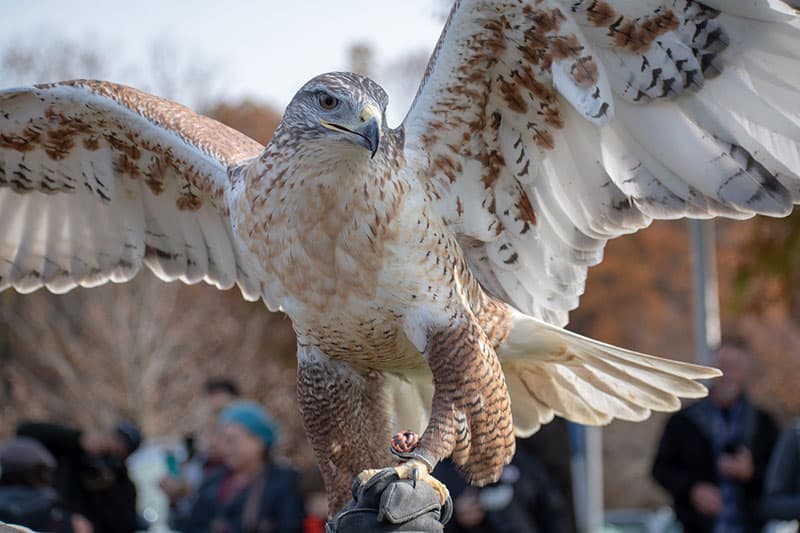 Unfortunately, the status of these birds is threatened, and much of their population has declined. According to Audubon, their current population may be less than 4,000 pairs. However, it’s possible to find non-breeding Ferruginous Hawks during the winter in California. They occupy open lands such as prairies, plains, and grasslands, where they’re often perched up high, or soaring above with their wings held in a distinct raised v-shape. 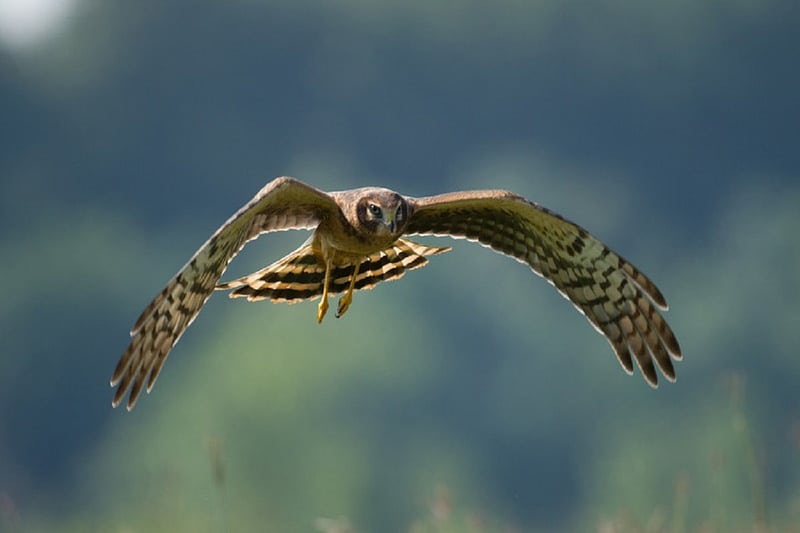 Non-breeding populations of Northern Harriers are found throughout the state of California. Look for them in marshes, prairies, fields, and grasslands where they tend to glide close to the ground in the pursuit of rodents such as mice and voles. Their flat faces and short, small bills look owl-like. It’s also believed that these hawks rely on their superior sense of hearing to locate prey, much like how an owl hunts as well.

Northern Harriers are the only harrier species in North America. They’re unique hawks with a distinct silhouette — slender bodies with long tails and broad wings. Like Ferruginous Hawks, Northern Harriers also tend to fly with their wings held in a v-shape.

While female hawks are brown on their uppers and white below with brown streaking, males are gray with white undersides. Both sexes have black banding on the tail, as well as a white patch on their rears that helps identify them in flight. 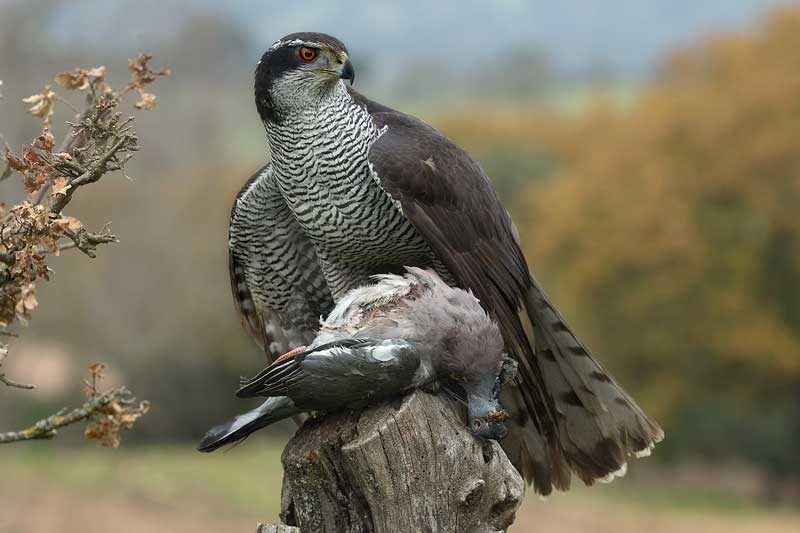 Here, they use stealth and high vantage points to ambush prey — mostly medium-sized birds like crows and small mammals. They’re such successful predators, even Attila the Hun had a depiction of a Northern Goshawk on his helmet.

Northern Goshawks are the largest accipiter hawks. They have bulky bodies, long, broad wings for an accipiter, and long tails. Their heads are a dark gay and they have a white stripes that run over their red-orange eyes, giving them the look of having eyebrows. The rest of their plumage is gray above and pale below, with lots of fine, dark gray barring.

Where Northern Goshawks are the largest accipiter hawks, Sharp-Shinned Hawks are the smallest accipiters, and the smallest hawk in general in North America. Non-breeding populations are found in the majority of California during the winter, though some year-round residents may occupy sections in the north.

Sharp-shinned Hawks look very similar to Cooper’s Hawks, and even birding experts sometimes have problems telling them apart. They both have nearly identical coloration — gray upper-parts and pale undersides with orange barring.

Despite their small size, Sharp-shinned hawks have a large personality. Like other accipiters, birds are an important part of their diet. They use their short wings and long tails to swiftly navigate crowded forests as they chase after songbirds. They’re also infamous for stalking backyard bird feeders and taking advantage of the unsuspecting groups of small birds that gather there.

7 Species of Woodpeckers in Illinois (With Pictures)

Hummingbirds In Florida (Common and Rare)

8 Species of Owls in Maine

7 Species of Hawks in Maine (With Pictures)

15 Species of Owls in Washington State

7 Species of Hawks in Alabama

7 Species of Owls in South Carolina (With...

The 9 Species of Hawks in Oklahoma (With...

The 2 Species Of Owls In Hawaii

Falcons in Colorado (4 Species With Pictures)

Check out our recommended feeders!

We talk about feeding wild birds, backyard birdwatching, how to attract various species to your yard, how keep pests away from bird feeders, and just generally anything to do with birds.

This site is a participant in the Amazon Services LLC Associates Program, an affiliate advertising program designed to provide a means for sites to earn advertising fees by advertising and linking to amazon.com. We also participate in other affiliate programs. If you click a link on our site then make a purchase we may receive a small commission at no extra cost to you.