Hawks are widely distributed throughout the United States and the rest of North America. They’re medium-sized to large birds of prey that generally belong to two distant categories — accipiters and buteos. You can find both kinds of hawks in Kentucky, and in this article we’re going to cover them all.

The 7 Species of Hawks in Kentucky

There are 7 types of Hawks in Kentucky you might find. These species include Red-tailed hawks, Broad-winged hawks, Northern goshawks, Rough-legged hawks, Sharp-shinned Hawks, Cooper’s hawks, and Red-shouldered hawks.

For information about them all, such as the best times to look for each kind, keep reading below!

Red-tailed Hawks are some of the most common hawks in North America. They’re year-round hawks in Kentucky as well as the majority of the country. Chances are you’ve seen one before — they often perch on tall vantage points like roadside telephone poles.

They feature white, creamy undersides with light, reddish brown markings. Even though they’re large hawks, they don’t weigh much. The average weight is around 2 and a half pounds for an adult.

When in flight you can observe their defined, buteo hawk silhouette; broad, rounded wings and short tail. They often circle high above open pastures and fields, scanning the ground for small mammals to eat.

Listen for their iconic raptor screech — you’ll surely recognize it as the same call used for hawks, and other birds of prey, in most movies and television shows. This page has even more interesting facts about Red-tailed hawks.

Broad-winged hawks can only be found during breeding season in Kentucky from April to August. These hawks are on the smaller side with stocky bodies and large, reddish heads. They have similar barring as the red-shouldered hawk, but with brown coloration rather than red.

You may be able to find one by listening for it’s piercing, single-pitched whistle it makes when hunting. However, if you’re lucky you’ll catch their fall migration, when large flocks, or kettles, of thousands of Broad-wing hawks travel to South America. They often cruise along mountain ridges and coastlines.

Northern goshawks are closely related to sharp-shinned and cooper’s hawks — except larger and more aggressive. Their coloration is mostly gray with white stripes above their red-orange eyes.

Northern goshawks are more secretive than a lot of other hawks, making them hard to locate. Only non-breeding populations are found in Kentucky, and scarcely at that.

The best chance of seeing them is to head for the woods, as they like to hide out in large, dense sections of forest. Be careful to keep a safe distance though, since these defensive hawks are known for attacking people that get too close to their nests.

You’ll only be able to catch the non-breeding population of Rough-legged hawks in the northern half of Kentucky. During the summer they reside in the arctic tundra, hunting and raising their young. In the winter, they migrate south to escape the cold.

They often fly up and face the wind while hunting, hovering and searching for prey like small rodents. In the summer they feast upon lemmings in the arctic tundra.

They share the buteo shape along with the Red-tailed hawk, but with longer, more narrow wings. Rough-legged hawks typically feature dark-brown and white colorations, though they also occur in light and dark morphs. Their fully feathered legs are what earned them the name “rough-legged.” 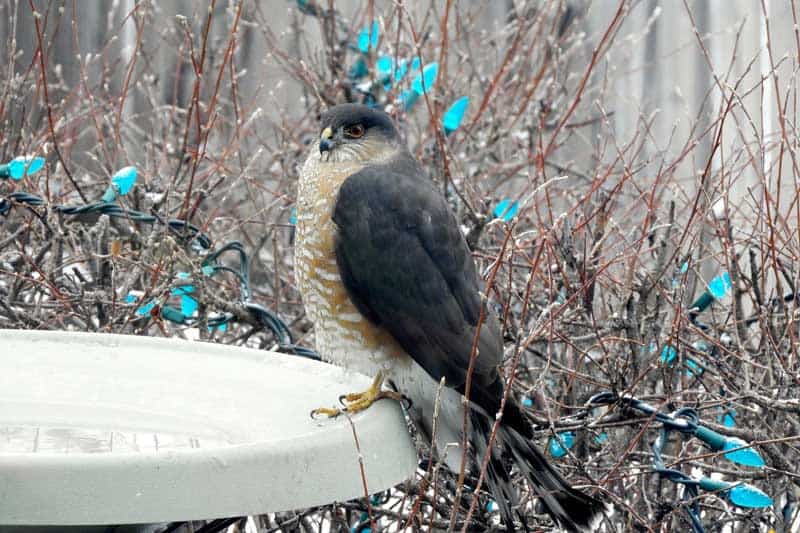 Sharp-shinned hawks are found year-round in the majority of Kentucky, with a small portion in the west being the  exception. The best time to catch a glimpse of them is during the fall when they migrate — they can often be the largest groups of raptors around during this time.

Though these hawks may be small, they sure are fast. Their long legs, short, round wings, and lengthy tails allow them to fly through dense forests at rapid speeds.

Watch out if you keep bird feeders in the yard, these guys are well-known for snatching up unsuspecting songbirds. If you notice them perched in your yard, remove your bird feeder and replace it after a few weeks. The hawks will search for food elsewhere and the songbirds will eventually return.

Cooper’s hawks are very similar in appearance to sharp-shinned hawks, making it difficult to differentiate between the two. Both birds even share the same flap-flap-glide flying style. However, Cooper’s hawks are larger with slightly broader wings.

They’re found year-round in Kentucky, most often on the edge of forests, but sometimes in backyards, too. Though they used to avoid populated areas, these hawks are becoming more and more common in towns, suburbs, and other urban areas — preying on the many pigeons and doves that live there.

They’re about the size of a crow and have an accipiter shape with broad, rounded wings and a long tail. Cooper’s hawks are incredible flyers, able to quickly navigate dense forests to chase after smaller birds.

Red-shouldered hawks are found year round in Kentucky. They live in wet forests — often along streams and creeks. In the spring they’re often spotted circling over their nesting area.

Like their name implies, Red-shouldered hawks feature light, reddish barring on their pale undersides as well as white banding on their tails. The translucent crescents near their wingtips are a great way to identify them.

Red-shouldered hawks and crows don’t exactly get along. They often fight and try to steal food from one another, though sometimes they do pair-up to eliminate a common enemy.