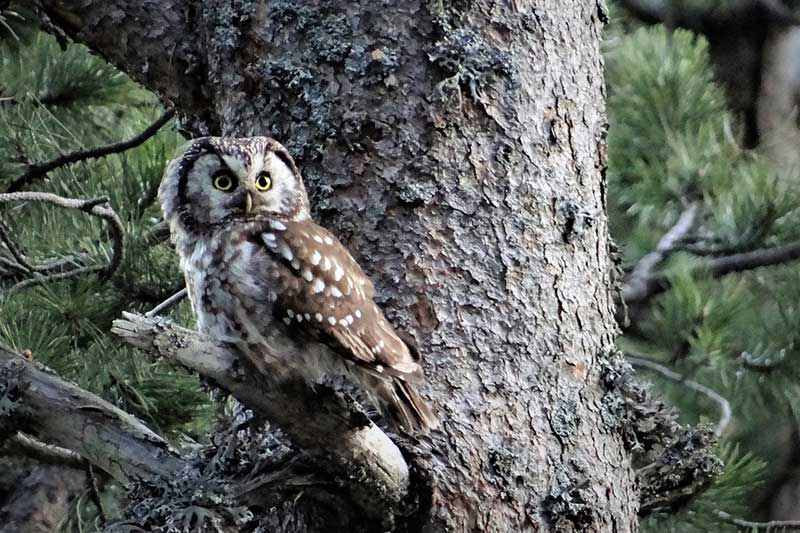 It’s the largest state in the country with an area of over 663k miles, so big in fact that you could fit Texas into Alaska 2 times! With as far north as Alaska is, many species of birds that enjoy warmer climates do not make it this far north. That being said, there are many types of birds that still live in the state, including a variety of owls. In this article we’re going to learn all about the 9 species of owls in Alaska, and the best tips for how to find them.

9 species of owls in Alaska

Alaska is our 49th state and is located to the north of Canada. The state is home a variety of owls, including a few that aren’t found in a lot of other states in the country.

Northern Saw-whet Owls aren’t found in the majority of Alaska, aside from South Alaska near the coast and then into Southeastern Alaska and the panhandle. In this areas they can be found all year in Alaska. Northern Saw-whet Owls tend to occupy dense coniferous forests and groves and can be pretty hard to locate due to their tiny size, camouflage-like coloration, and secretive nature.

If you live in Alaska, in an area where Northern Saw-whet Owls breed, consider putting up a nesting box for them. Not only will it provide a home for a breeding pair of owls, but it will also increase your chances of getting an up-close look at these tiny birds.

Boreal Owls are found year-round in much of Alaska in dense mixed-wood and coniferous forests, though less common in Western Alaska. They’re mysterious birds and are often hard to spot, especially during the day. They roost in a different tree everyday, so don’t expect to find them in the same spots.

At about the size of a robin, they’re small owls with large, square heads, stocky bodies, short tails. At night they perch and wait for prey such as small mammals and birds before swooping down and grasping their meal with their talons. Boreal owls are usually quiet and don’t call very frequently. However, in the late winter through the spring this behavior changes as males call more often for mates. Listen for these quick hoots at night for a better chance at finding them.

Length: 6.4-7.1 in
Weight: 2.1-2.5 oz
Wingspan: 14.5–16 in
Northern Pygmy-Owls are generally widespread in the mountainous western United States, but their range doesn’t go far north. They do live in the southern parts of the Alaska Panhandle year-round, so technically they are in Alaska. They’re active during the day, which makes seeing them a little easier than most other nocturnal owls, but they’re also pretty small and tend to perch still waiting for prey — so you still need to keep your eyes peeled.

Try to familiarize yourself with their high-pitched toots and calls to make locating them less tricky. Pay attention to groups of songbirds making a commotion, too. If they find a Northern Pygmy-Owl, they’ll often mob it, trying to get it to leave.

Western-screech Owls are another owls species only found in far Southern and Southeastern Alaska, particularly the panhandle. They’re small, robin-sized owls with stocky bodies and short tails. Their mostly gray-brown plumage with streaky undersides camouflages them exceptionally well against trees when they’re roosting in holes during the day.

At night they hunt, perching still and silently before swiftly flying and seizing their prey. They’ll also catch insects in mid flight to supplement their diet, as well as reptiles, fish, and small birds.

Like trying the find other nocturnal owls, waiting for their calls at night is often the best way of locating Western-screech Owls. Their calls are a series of high-pitched toots that speed up slightly at the end. These owls will also take to nesting boxes, so consider setting one up in your yard if you live in their range.

When one thinks of an owl, the Great Horned Owl is often what comes to mind. These owls possess all the characteristics synonymous with story-book owls; large, cat-like eyes, long tufts on their heads, thick, stocky bodies, and a deep, mysterious hoot.

They’re one of the most commonly found owls across North America and are found year-round in Alaska, though not common in north Alaska. Great Horned Owls thrive in a wide variety of habitats, but they’re often found in woodlands with plenty of open spaces to hunt. These large owls are aggressive hunters able of taking down prey much larger than them.

It’s common to find Short-eared Owls in the breeding season throughout Alaska. They’re also one of the easier owl species to spot, due to their frequent daytime activity and tendency to occupy open spaces like fields and grasslands. Their broad, round wings allow them to gracefully flap close to the ground with a seemingly weightless appearance.

Great Gray Owls are found year-round in Central and Southern Alaska. They’re very large birds with broad wings and long tails — one of the tallest owls in America. Their eyes appear small and close together on their big facial disks, giving them a unique expression. A white “X” pattern on their faces is another key identifier. Like their name implies, their bodies are covered in fluffy, silvery gray feathers.

Snowy Owls are found throughout Alaska, but primarily with a wintering range. Though in some places in far north Alaska they stick around all year. In the spring and summer Snowy Owls are primarily found in the arctic tundra, and the majority of Canada and Alaska in the winter. When they appear, they’re typically seen in spacious areas like fields.

Northern Hawk Owls are generally found in Canada, but their range extends into Southern and Central Alaska. These interesting birds have the appearance of an owl, but the behavior of a hawk. They have oval-shaped, medium-sized bodies with short wings and a long, pointed tail.

Like many owls, they have large, round heads with yellow eyes and white faces. However, like hawks, they tend to hunt during the day around dawn and dusk, perching atop trees before gliding after prey. Also like hawks, their eyesight is tremendous and are able to spot prey from up to half a mile away.