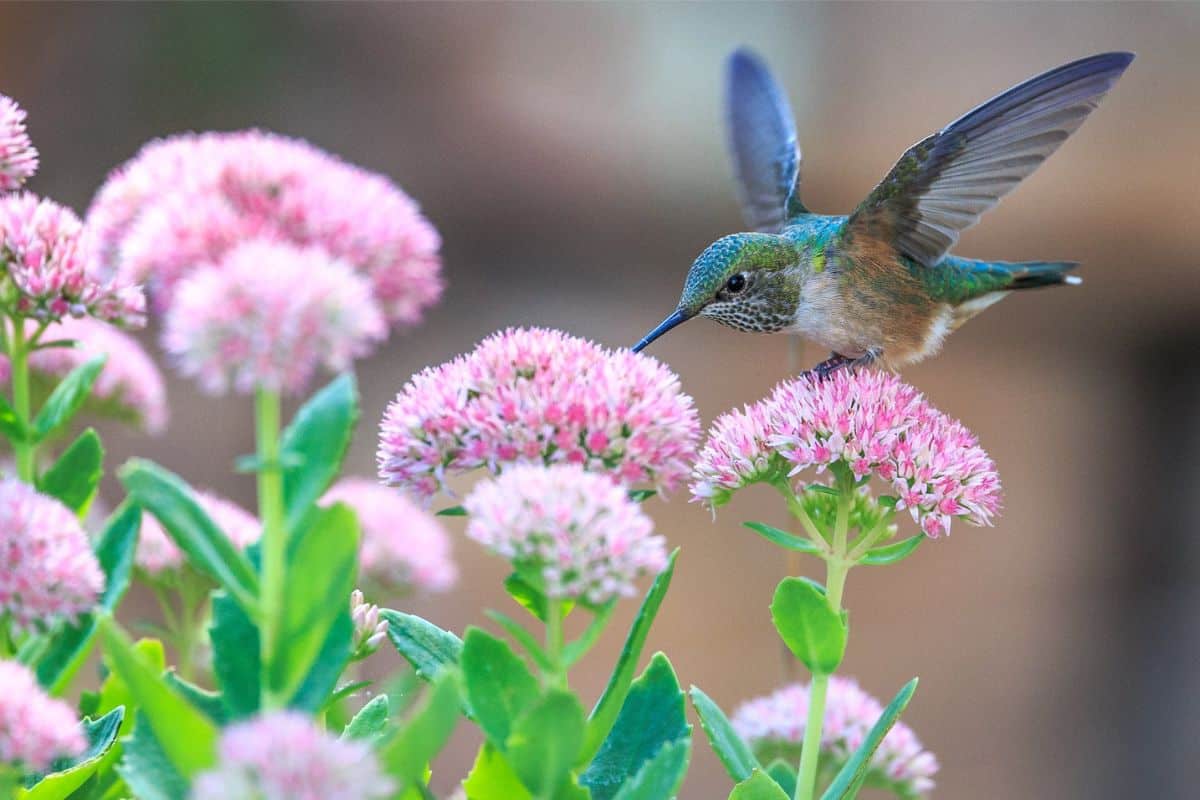 Hummingbirds are some of the smallest, yet most well-known birds in North America. Like tiny jewels, they fly around at breakneck speed, performing acrobatics around foliage and feeders alike.

Many backyard birders are surprised to discover that hummingbirds sing buzzy songs and chirp loudly. What do those calls mean, and why do hummingbirds chirp?

Why Do Hummingbirds Chirp?

Once you recognized their high-pitched squeals and chirps, they can be of great help spotting them in the wild. Often in a busy forest full of foliage, you’ll hear hummingbirds before you see them.

Why Do Hummingbirds Chirp?

Hummingbirds chirp to communicate with one another. When individuals run into each other, they communicate through a series of chirps and whistles.

Hummingbird interaction often leads to territorial conflict, since hummingbirds are small, yet aggressive. They are intensely possessive about their home turf. Most will loudly vocalize their objection to sharing nectar sources with other hummingbirds.

Male hummingbirds chirp often to attract mates. Along with buzzy songs, most hummingbirds, such as the ruby-throated hummingbird, perform dazzling arial displays that end with a squeak from the tail feathers.

They also chirp to delineate the borders of their feeding territory. This warns competing hummingbirds not to enter the singing hummingbird’s space. If they do, they’ll be chased out of the area with a loud, buzzy song.

Singing is not as common in hummingbirds as it is in other bird species. Yes, they can sing, but it is not the long and melodious songs you are used to hearing from songbirds like cardinals or thrushes. Most of the sounds that hummingbirds are able to make using their voicebox (the syrinx) sound like chirps or whistles.

In fact, the very name “hummingbird” indicates that most of the sound they generate is more like a hum than a song. This ‘hum’ comes from the sound of  air moving through their rapidly beating wings, beating between 23 and 60 times per second. This hum can always be heard while they are flying, and sounds a bit like the hum of an electric fan or tiny motor boat.

While many songbirds use their songs to attract a mate, hummingbirds use vocalizations as well as their flashy colors and aerial displays.

When trying to find a mate, male hummingbirds give their performance everything they have. They fly in the direction of sunlight so their bright gorget shines, flashing colors at the female. They also conduct complex flying maneuvers such as diving, and often these maneuvers will make their tail feathers buzz with a unique sound that the female can pick up on.

What does it mean when hummingbirds chatter?

Chattering and chirping is the primary way hummingbirds vocally communicate to one another. While the subject and message behind the chirps are not explicitly clear to humans, we can make an educated guess.

If you have hummingbird feeders in your yard, you know that they can be quite talkative around food. Sometimes they will give soft chirps as they buzz around the feeder. Other time you are likely to hear louder, rapid fire chirping and squeaking as one hummingbird tries to chase another away from the food. These sounds are used often as they negotiate ownership over feeders or blooms.

Chattering behavior is also heard during mating season because males and females are in close proximity to each other. The females chatter amongst themselves in a central feeding area or perch as they wait to be serenaded by hopeful males.

Chattering is also common between adults and juveniles. Recently fledged hummingbirds are unfamiliar with the rules of the game, so to speak. Adults chide and correct them in communal settings.

This video is a great example of the many sounds hummingbirds make. You can hear the low-pitched humming buzz of their wings, along with many chirps and chatters.

Do both male and female hummingbirds chirp?

Yes, both sexes of hummingbird make chirping vocalizations. However, males are far more vocal than females because they are busy defending their territory year-round and displaying for females during the breeding season.

Female hummingbirds may chirp responses, but they are mostly silent while they wait for a male to catch their eye.

Some hummingbird species do have females that sing. The male Blue-throated Mountain-gem, a hummingbird native to the American southwest and Mexico, does not have an arial display. Instead, the male and female sing a duet together to make their relationship official.

Do hummingbirds make a loud chirp?

Yes, hummingbirds can chirp very loudly in proportion to their small bodies. This noise can come from the bird’s vocal cords or its tail. Many species of hummingbirds produce interesting whistles and chirps with their tail feathers.

One of the most spectacular displays with chirping and tail squeaks is that of the Anna’s hummingbird.

Male Anna’s hummingbirds’ tail feathers make a dramatic squeaking-pop sound when they pull up from arial dives of up to 100 feet. This spectacular mating display is accompanied by sunlight shining off his bright pink neck feathers.

Are Hummingbirds happy when they chirp?

It depends on the situation. Older fledglings that chirp when receiving meals from their mother might do so out of happiness for getting fed.

Hummingbirds are normally very aggressive, so they are probably not pleased when they chirp as they chase an invader from their territory.

In a case like this, you’re likely to see the defending hummingbird zooming after the invader to chase him out of the area. Backyard bird feeders setups are great environments to watch territorial dynamics play out.

If you want to reduce aggression in your hummingbird feeder setup, consider placing several small nectar feeders in separate locations around your yard, instead of one large feeder. This provides the hummingbirds with more space to feel safe and non-threatened.

Hummingbirds chirp in several ways and for many different purposes. They communicate, defend territory, and woo mates with their voice. Even non-vocal methods of ‘chirping,’ are used such as the sound made by rustling tail feathers, is a part of their vocabulary.

One hummingbird may sing at dawn, buzz to chase away territory invaders, and chirp during a courtship display. Now that you know more about hummingbird vocalizations, don’t hesitate to get outside and see them for yourself.