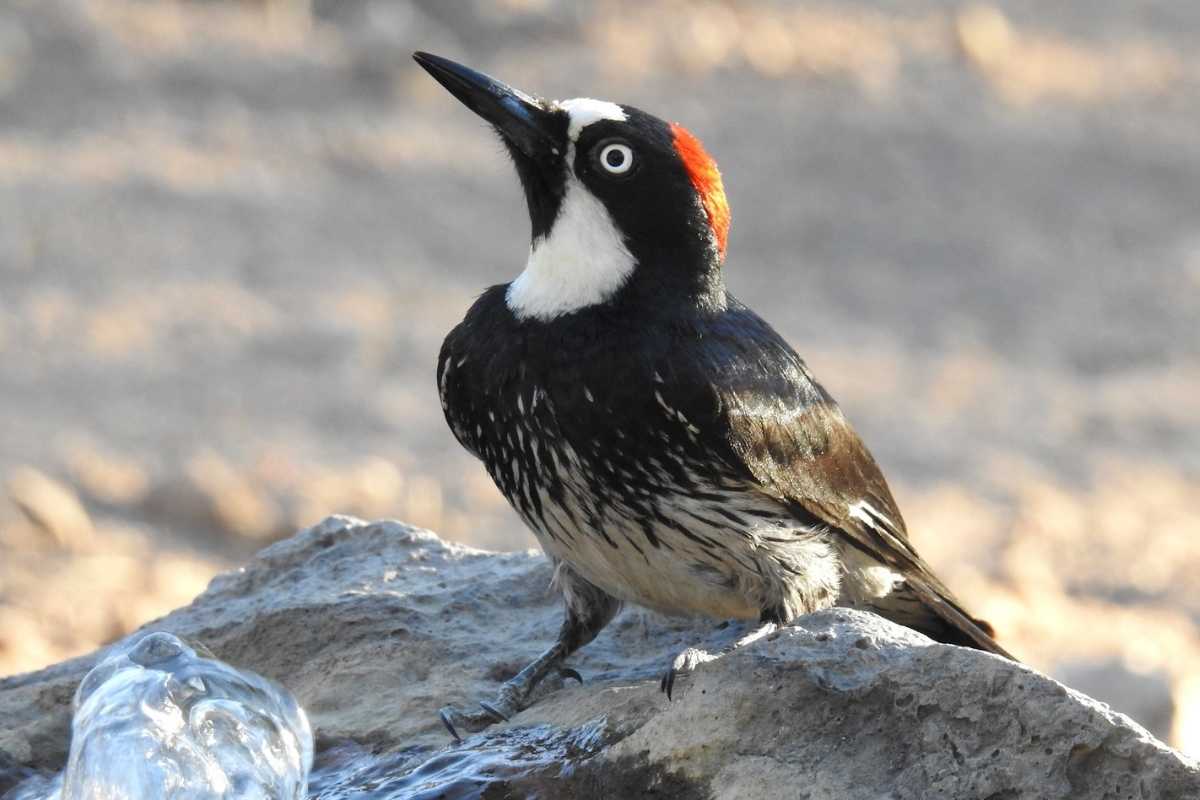 Woodpeckers come in all sizes, and are uniquely adapted to life hopping up and down trees excavating insects from the wood. In this article we’ll take a look at 12 species of woodpeckers in Oregon, and give a little information about where and when you might be able to spot them. At the end of the article we’ll also share a few tips on how to attract woodpeckers to your yard.

12 Species of Woodpeckers in Oregon

There are at least 17 species of woodpeckers that can be seen in North America. With 12 species that make their home here at least part of the year, Oregon is a great place to find woodpeckers!

Acorn woodpeckers have a very limited range in North America, but can be found along coastal Oregon year-round. You can find them in oak or pine-oak forests where they eat acorns and a number of different insects.

Like many woodpecker they will at least occasionally visit suet feeders, but aren’t known to be a common backyard species. They are considered fairly common in the Rouge Valley and Klamath River Canyon.

Both sexes have a black back, tail and chest, with a white streaked belly. Their mostly black head has a white ring around the face, and their white eye-ring really stands out. Both males and females have red on the head, but the males red extends down to the forehead.

As their name suggests, acorn woodpeckers are known for drilling holes in trees called “granaries” and storing acorns in them, as many as 50,000 in some cases. They jam them into these holes so tightly that other animals are unable to remove them. This is their cache for a later date, when food is more scarce. They’ll also fiercely guard these food caches from anything that tries to steal from them.

While the American three-toed woodpecker is actually found more often in Canada than the U.S., they can be found in certain areas of Oregon. Look for them in the wooded areas along the Cascade range, as well as the northeastern corner of the state.  They prefer damaged, old growth forests with lots of dead or even burned trees where they can extract insect larvae and mine for bugs easily.

You can find these tiny woodpeckers everywhere throughout Oregon all year. They are very common throughout almost all of the U.S. and are the smallest species of woodpeckers in North America. The downy is only about the size of a sparrow, and can be identified by the white spots on their backs, and pure white chest and belly. Males have a red patch at the back of their head.

These two woodpeckers are very similar in all ways from habitat to diet. They can be found in Oregon all year, and are more common in the western half of the state. The hairy woodpecker tends to be a little more shy of humans, and while they will visit backyard suet feeders, they aren’t as commonly seen as the downy.

Lewis’s woodpeckers may be seen throughout Oregon, but they are often absent from the eastern half of the state during the non-breeding months. They tend to stay in pine forests and forests that have been burned, but their populations are often unpredictable.

Males have a red “mustache” that females do not. In Oregon you get the “red-shafted” variety, and they have bright red feathers on the underside of their wings and tail.

Northern Flickers can be found throughout Oregon all year, and will sometimes visit backyard suet feeders. If you have some leaf piles in the yard, you may see them digging around for bugs.

The pileated woodpecker is the largest of all woodpeckers in Oregon, as well as North America. They have a black body, black and white striped face and large red crest. Males have a red cheek stripe while females do not. Pileated woodpeckers are typically only see in the western third of the state, as well as the northeast corner.

Their favorite food is carpenter ants, and they will create large rectangular holes in trees to get at them.

Red-breasted sapsuckers are found year-round in western Oregon. They mostly reside in pine forests that also contain aspen and alder.

Red-breasted sapsuckers are medium sized woodpeckers with solid red heads and red chests. The rest of their bodies are covered in black and white plumage. This all-red head makes them easy to tell apart from other sapsuckers.

They forage the same way other sapsuckers do, by drilling small sap wells into trees in order to lap up the tree sap as it flows.

Look for them in Oregon early in the breeding season (mid-May), and early in the morning when they are most active. They remain in eastern Oregon for the summer, then head south out of the state in the fall.

White-headed woodpeckers are only found in isolated patches in the United States. They favor mountainous pine forests and aren’t typically found in woodlands without pines. In Oregon, they are typically only see in the Ochoco, Blue and Wallowa mountains, and the east side of the Cascades.

Williamson’s sapsuckers are only found in a handful of western states, Oregon being one of them. They are mainly found in the Blue Mountains, and the eastern slope of the Cascades. These sapsuckers only visit Oregon during the summer breeding season, then head further south for the winter.