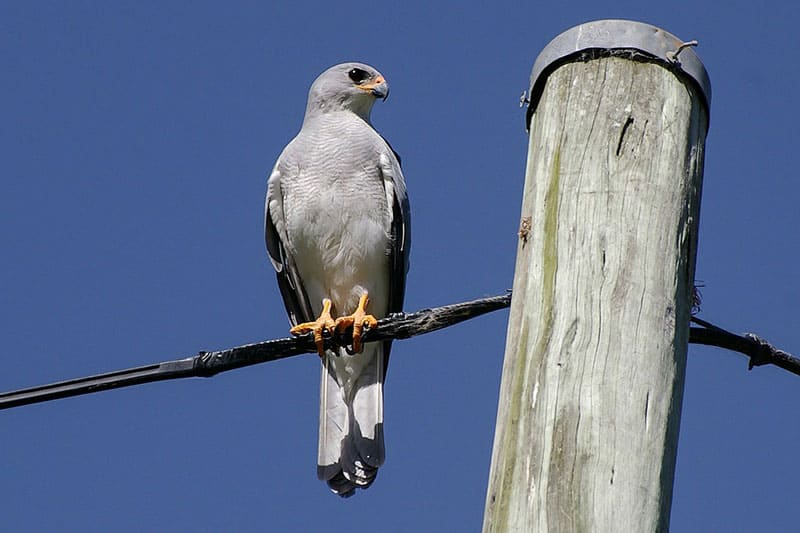 Depending on who you ask, there are up to 25 different species of hawks in the United States. Due to different states having different climates and food sources for the various species, each state may have it’s own collection of hawks that live there at various times of the year. In this article we’ll discuss hawks in Arizona. How many species can be found in the state, and a little bit about each one.

When it comes to hawks in Arizona there are 12 different species that you may encounter, aside from the rare vagrant. These 12 species all have a range in the state of Arizona according to either allaboutbirds.org or neotropical.birds.cornell.edu. Those 12 species are the Red-tailed Hawk, Sharp-shinned Hawk, Cooper’s Hawk, Broad-winged Hawk, Northern Goshawk, Rough-legged Hawk, Common Black Hawk, Harris’s Hawk, Gray Hawk, Swainson’s Hawk, Zone-tailed Hawk, and the Ferruginous Hawk.

Wanna know a little bit about where you can see them in Arizona and what they look like?

The Red-tailed Hawk is a large hawk and the most common one in all of North America. They have a year-round range in the entire state of Arizona and can commonly be seen soaring overhead or perched high up on telephone wires and high in trees. They feed mostly on small to medium-sized mammals so they aren’t seen in backyards stalking bird feeders as often as a Sharp-shinned or Copper’s Hawk is.

The Sharp-shinned Hawk has a non-breeding population in most of the state of Arizona. Portions of central Arizona near Flagstaff, Tonto National Forest, and Coconino National Forest have a year-round population of this species. Sharp-shinned Hawks, aka Sharpies, are notorious for stalking backyards and bird feeders as songbirds make up about 90% of their diet. If you see one in your yard be sure to take down your feeders for a few days and allow the hawk to move on before putting them back up.

Copper’s Hawks can be found all year long throughout most of Arizona. Sharp-shinned and Cooper’s Hawks look extremely similar and the size difference is the main indicator between the two species. Like the Sharpie, the Cooper’s Hawk loves to prey on other birds and can also be a nuisance in backyards. See the video below for some tips on how to tell the two hawks apart.

I almost left this species off of the list of hawks in Arizona, but according to allaboutbirds.org the Broad-winged Hawk as a very small migration range just west of the Grand Canyon. If you’re near this part of the state in the spring, keep your eyes open for them as they are often spotted in the area at this time of year.

Broad-winged Hawks leave South America by the hundreds of thousands in the fall to start their migration to their breeding grounds in North America. Once they arrive they are found in the eastern part of the U.S. and throughout much of Canada, but not the western parts of the United States. Overall they are rare in Arizona.

Found all over Arizona with a year-round range in the eastern half of the state, the Northern Goshawk is the larger relative to the Cooper’s and Sharp-shinned Hawks. This raptor got its name from the Old English word for “goose hawk,” which refers to the fact that it preys on other birds. They can be identified by their mostly gray color, orange or red eyes, and white stripes over their eyes that look like eyebrows.

The Rough-legged Hawk has a non-breeding population in all of Arizona, except for the southernmost regions of the state along the border where they are more rare. The best time to see one anywhere in the U.S. in the in the winter time since they migrate far north to the arctic regions of Alaska and northern Canada each year to breed. They can easily be identified by their feathered legs that go all the way down to their toes. The only other species of hawk with this trait is the Ferruginous Hawk who is further down this list of hawks in Arizona.

The Common Black Hawk has a breeding range only in parts of central and southeastern Arizona, although they have been spotted many times in other parts of the state. They are found primarily along the coast in Central America and the northern tip of South America. They can be seen perched low in trees waiting for prey such as fish, crabs, reptiles and amphibians but are generally opportunistic eaters. They are mostly black in appearance with a yellow bill. 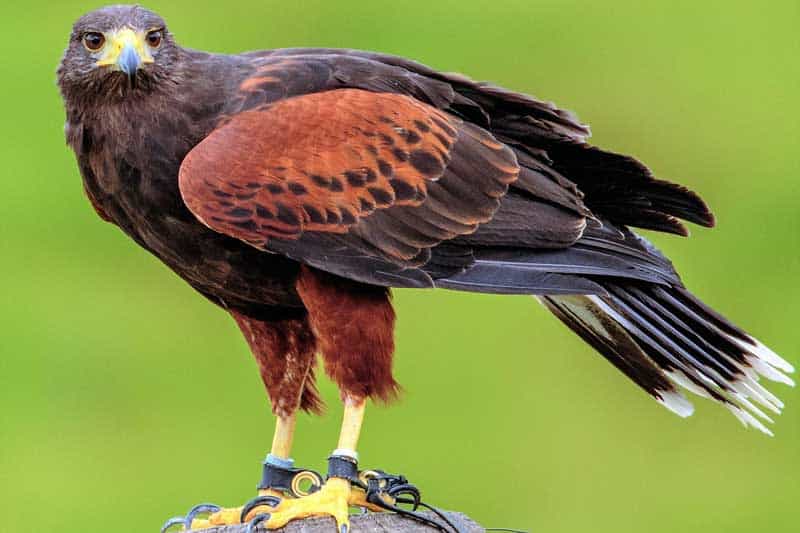 The Harris’s Hawk is a year-round resident to areas of southern central Arizona around the cities of Phoenix and Tucson. Their plumage consists of dark brown and chestnut red feathers and they have white tipped tail feathers. They are known for being the most social hawks in North America and hunt in groups unlike many other species that hunt alone. Their main diet is that of medium sized mammals like rabbits, squirrels, and rodents so they aren’t often seen around bird feeders. 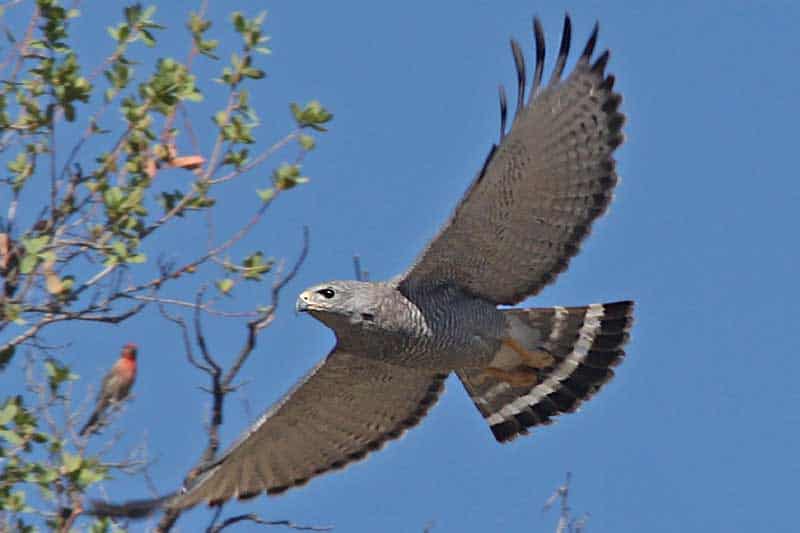 Gray Hawks have a very limited range in the U.S. and can only be found in the southeastern corner of Arizona. They are rather large hawks but slightly smaller than the large Red-tailed Hawk. They’re mostly gray in color as the name suggests with finely gray and white barred chests and white stripes on their tails. Their favorite food is lizards and they used to be known as the Mexican Goshawk due to its appearance and range.

Swainson’s Hawks can be found throughout the state of Arizona with a breeding range in the eastern parts of the state and a migration range to the west. The best time to see these hawks is in the summer time on utility poles along the road scanning the ground for prey. They may also be seen traveling in large flocks in the tens of thousands called “kettles” in April and September. They have one of the longest migration routes of any American raptor with some traveling from Southern South America all the way to Alaska to breed. 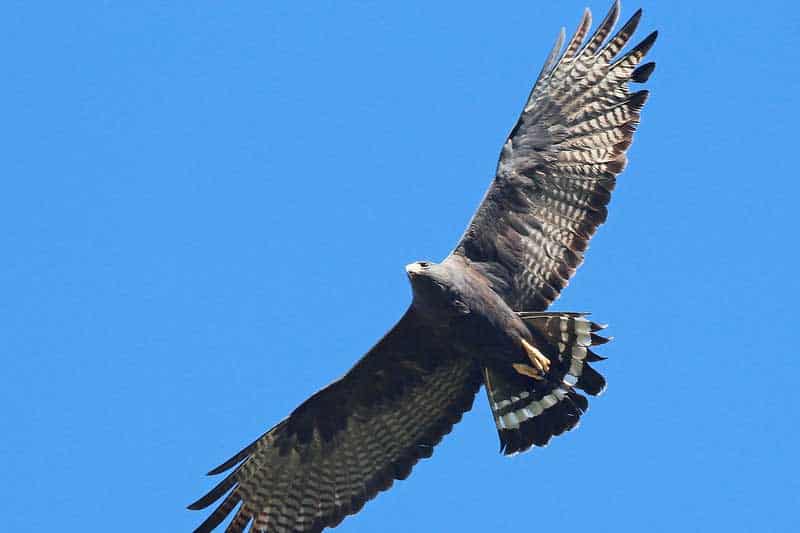 The Zone-tailed Hawk’s northern most limits of its range is in central Arizona. They migrate north from Central and South America each year to breed in portions of Arizona, New Mexico, and Texas so Spring and Summer are the best times to see one. They resemble the harmless Turkey Vulture and have been known to imitate this bird in order to fool their prey. Zone-tailed Hawks are one of the least studied birds of prey in North America and are somewhat unstudied. 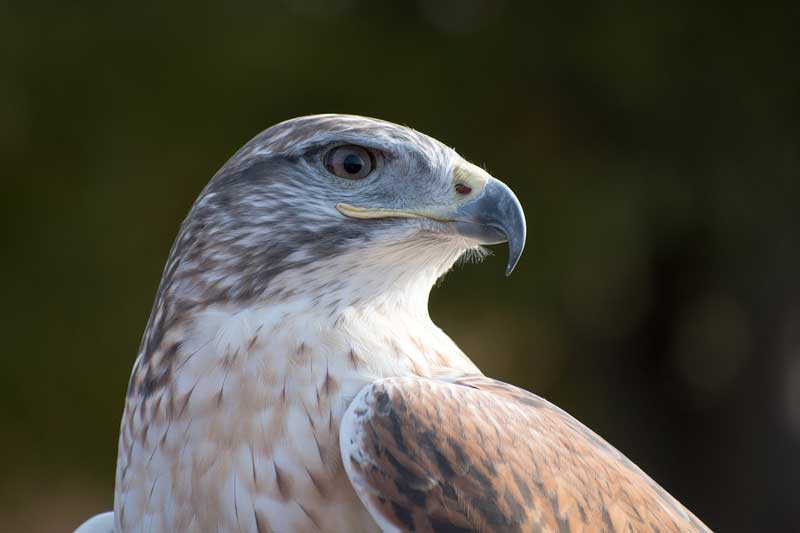 The Ferruginous Hawk is a year-round resident in the northern half of Arizona and a winter migrant in the southern half of the state. Along with the Rough-legged Hawk they are the only other species to have feathers all the way down to their toes. They are the largest of all North American hawks, even larger than the Red-tailed Hawk.