I recently wrote an article about the different species of hawks in Arizona, so I decided to cover the types of owls in Arizona as well. Arizona has a warm climate and is right in the migration path of hundreds of species of birds, several species of owls included. Even though many types of owls make their home in Arizona all year long, a few migrate from far south and aren’t year-round residents.

These 13 species of owls in Arizona I could confirm have a range in the state based on various sources like allaboutbirds.org and neotropical.birds.cornell.edu. In this article I’ll cover those species, where they can be found in Arizona, and give some fun facts about them.

They are very widespread and regularly seen in forests, swamps, and deserts as well as more urban areas like cities, suburbs, and parks. Great Horned Owls are slightly larger in size than Red-tailed Hawks and the two raptors are known to be enemies.  They are nocturnal but can often be seen at dusk sitting on fence posts or in tree branches waiting for darkness to roll in.

Barn Owls are also year-round residents to Arizona. These beautiful birds of prey can be identified by their whiteish, heart-shaped faces. They got their name by making their nests in man made structures like abandoned buildings and barns. Look for flashes of pale white wings or listen for their screeches at night if you want to spot one, but they are known for being particularly elusive.

They are silent and efficient nocturnal hunters that swallow their prey whole, bones and all. They then regurgitate the unneeded parts in pellet form. Barn Owls have amazing low-light vision like other owls, but their ability to track and hunt prey based on sound alone is incomparable to any other species of animal on the planet. 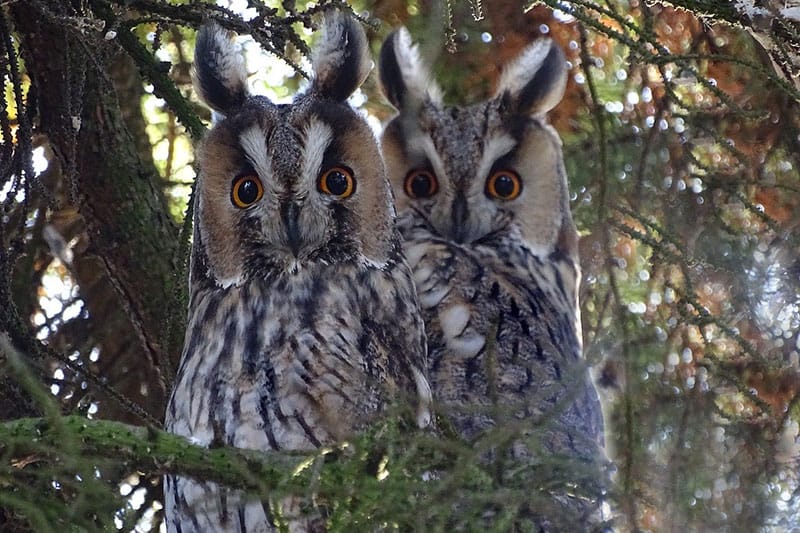 Long-eared Owls are residents to most of the state of Arizona all year long. These secretive owls are very well camouflaged and may be hard to spot unless you know exactly where and when to look. They have extra large ear tufts giving them a surprised expression rather than the angry one that the Great Horned Owl has.

Long Eared Owls prefer dense vegetation and forests for nesting near open grasslands and fields for hunting. They feed mostly on small mammals such as rodents and young rabbits but will also occasionally prey on other birds. Listen for their long, low hoots at night that can be heard from long distances as well as long and narrow owl pellets on the ground if you want to find one.

Short-eared Owls have a non-breeding range in Arizona so your best chance to see one in the state will be in the winter. Look in open areas such as grasslands and fields around dawn or dusk if you want to spot one. They migrate north each year to their breeding grounds in Canada and Alaska.

They are one of the most widespread owls in the world and are commonly seen in the daytime. You can see their short ear tufts in the image above, but many times they lay flat and are hard to see. The Pueo, Hawaii’s only native species of owl, is a subspecies of the Short-eared Owl. Even though they have a widespread range worldwide, their overall population is thought to be in a steep decline.

This little owl has a year-round status in the majority of Arizona with a non-breeding status in the southwestern corner of the state. The Northern Saw-whet Owl is recognizable by its cat-like face yellow eyes, and small size. Saw-whet owls got their name because their calls sound similar to a saw being sharpened by a whetting stone.

Listen for these elusive little owls near forests on quiet nights between January and May. I’ve never actually heard a whetting stone, but their call sounds like a “too too too”. They roost silently in the trees and like many other owls can be very difficult to spot.

They can be found in open woodlands as well as urban areas like parks and cities across the entire state of Arizona. Western Screech-owls don’t actually make a screeching sound like their cousin the Eastern Screech-owl but more of a “toot toot” sound.

They nest in tree cavities like the image above but will also take to nest boxes if provided. Screech-owls are small but excellent hunters that can take down prey like rabbits that are larger than their own bodies. They also have great camouflage and are able to blend in with their surroundings making them difficult to spot.

This species has a very limited range not only in Arizona but in general. Whiskered Screech-owls are only found in the southeastern corner of the state, near the border of Mexico and New Mexico. They look very similar to the above Western Screech-owl, but are a bit smaller.

Whiskered Screech-owls are common in oak woodlands at higher elevations and are sometimes found side by side with Western Screech-owls in the lower parts of canyons in southern Arizona. They hunt from dusk all through the night and nest in natural oak or sycamore tree cavities, or ones left by woodpeckers.

The Mexican Spotted Owl is one of 3 subspecies of spotted owls as well as one of the largest owls in North America. It is listed as threatened by both the U.S. and Mexican governments. In the United States they are found in small pockets in Arizona, Colorado, New Mexico, Texas, Utah, and Nevada.

The Spotted Owl, including this subspecies, has a declining population due to habitat loss with an estimated global breeding population of just 15,000 owls. Over half of these are found in the U.S. with about 40% in Mexico. Another factor that contributes to their declining population is the Barred Owl who is bigger, more aggressive, and is known to drive them away.

Found mostly in northern and eastern Arizona, the Northern Pygmy Owl is a small owl that feeds mainly on songbirds. Northern Pygmy Owls are diurnal, or active during the day, giving you a fighting chance to spot one of these tiny guys. They sit very still and quiet during the day just waiting to surprise attack their prey for a meal.

Unlike other types of owls, Northern Pygmy Owls will not usually take to man-made nest boxes. In size they are only about as big as an American robin yet are known for taking prey up to 3 times their size. They can be identified by their small size, yellow beaks and eyes, and white speckles on their heads.

Only found in southeastern Arizona and the southern tip of Texas, the Ferruginous Pygmy Owl is considered threatened in the United States but still widespread in Central and South America. Because of this they are considered to be rare in both states but can still occasionally be spotted in mesquite forests along rivers and in deserts dominated by saguaro cactus.

This species is also commonly active during the day and feeds on songbirds, insects, small mammals, and lizards. They are permanent residents to their little corner of southeast Arizona. 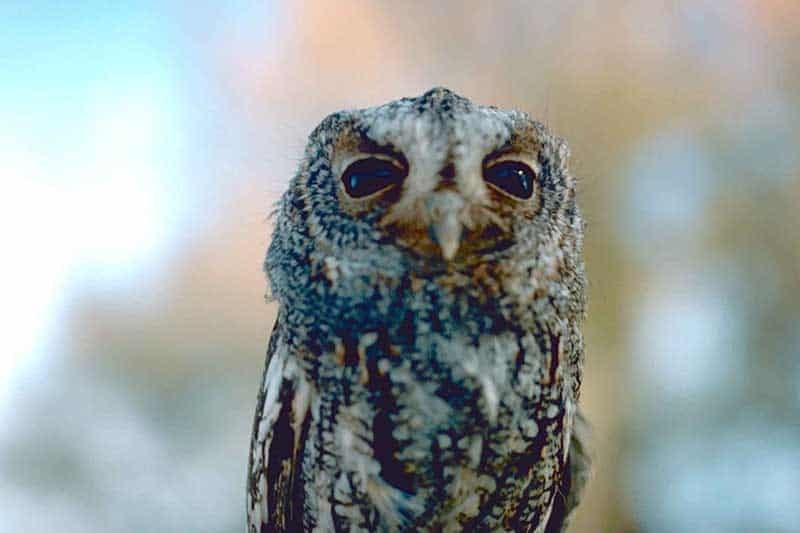 The Flammulated Owl has a very spotty breeding population in Arizona, mainly in central Arizona between Flagstaff and Phoenix in the National Forests located in that region. They roughly the size of the Northern Pygmy Owl, slightly smaller even, and are one of the smallest owls in Arizona and North America.

Their diet consists primarily of flying insects that they hunt at night. They have reddish gray feathers, are well camouflaged, and resemble screech-owls but with shorter ear-tufts. Surprisingly, even though they are very small in size they have one of the lowest pitched hoots of all owls. 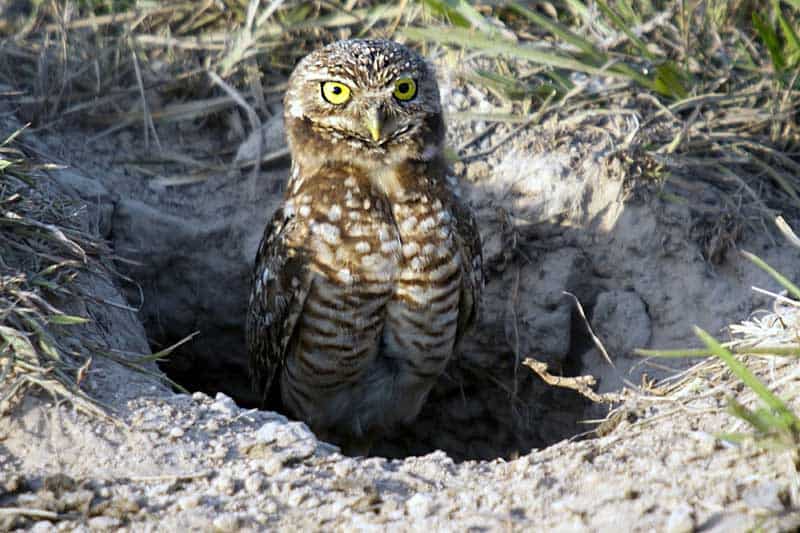 The Burrowing Owl range in Arizona cuts the state in half with the northern part of the state being breeding only and the southern half have a year-round population. Burrowing Owls are the only raptors that nest and roost underground, usually in abandoned burrows left being by groundhogs or prairie dogs. Though they have occasionally been known to excavate their own burrows.

They are sandy-colored, have long legs, and yellow eyes. They hunt on the ground during the day and protect their dens fiercely from intruders. Look for Burrowing Owls in the early morning or late day when they are most active, particularly in areas where you know prairie dogs and other ground dwelling mammals live.

Elf Owls have a breeding range in the southern half of Arizona and are the smallest owls in Arizona, and also in the whole world at just about the size of a sparrow! Look for them in Arizona in the Spring and Summer months as they migrate south to warmer climates in Mexico during the winter.

You can identify Elf Owls by their tiny size, lack of ear-tufts that give them a round head, and brownish-gray feathers.  They feed primarily on insects and arthropods, but will sometimes eat small lizards and blind snakes. Elf Owls are listed as an endangered species in California and have been nearly extirpated due to habitat loss, they are listed as threatened in Arizona.

Sources for this article: